Forget the First Amendment: 41% of college students believe hate speech SHOULD NOT be protected by the constitution as more universities cancel controversial campus speakers

Some 41 percent of college students say hate speech shouldn’t be protected under the First Amendment, according to a new survey.

Just 58 percent said that hate speech should be protected under the amendment, which guarantees American’s a right to freedom of speech, according to the survey of 4,407 students by the Miami-based Knight Foundation.

‘There is a new class of students on college campuses, increasingly varied in background and ideology, who are grappling with the reach and limits of free speech and what it means in the 21st century,’ said Sam Gill, Knight Foundation vice president for learning and communities.

‘Studying their views is key to understanding the impact that they may have on rights that are fundamental to our democracy,’ he added.

This chart illustrates the share of college students who think certain activities are always, sometimes or never acceptable

More than two-thirds (68 percent) of respondents said they felt that students can’t openly express their views due to a climate on campus that has people fearful of offending their peers.

Just 31 percent disagreed that such a climate exists.

These opinions of young Americans on the matter of freedom of speech are problematic – if well intended, said Ken Paulson, the director of the Free Speech Center at Middle Tennessee State University.

‘Protecting hate speech is actually the reason we have a First Amendment,’ he told DailyMail.com. ‘We don’t need protection for freedom of speech if everyone agrees with one another. The protection we need is for speech that others may find offensive.’ 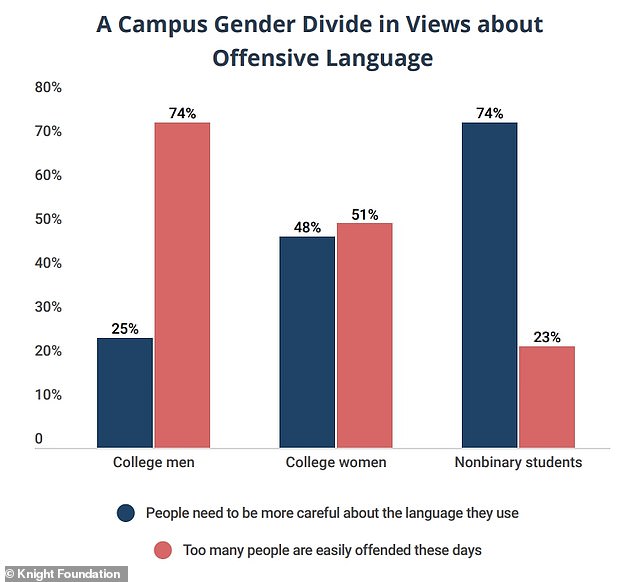 This graph illustrates the gender divide in opinions on whether people are generally too easily offended, or if they need to be more careful about the language they use

The survey comes as more colleges are opting to cancel or not invite controversial speakers to their campuses due to student outrage.

For example, Middlebury College in Vermont apologized to students earlier this year after getting a negative reaction to inviting a conservative speaker to campus. College officials also promised to do more to prevent invitations to such speakers going forward.

‘The big difference between today and a decade ago is that the conservatives are the big driving force behind freedom of speech on campuses,’ Paulson said.

The report also found that more than half (53 percent) are in favor of protecting freedom of speech, while 46 percent say it’s important to ‘promote an inclusive and welcoming society.’

‘The Constitution was not designed to keep your feelings from being hurt,’ said Paulson, also the former editor-in-chief of USA Today. ‘It was designed so every American could say or do whatever they wanted and do so without being punished. To understand freedom of speech you have to understand that it’s the minority being protected against the majority and the government.’ 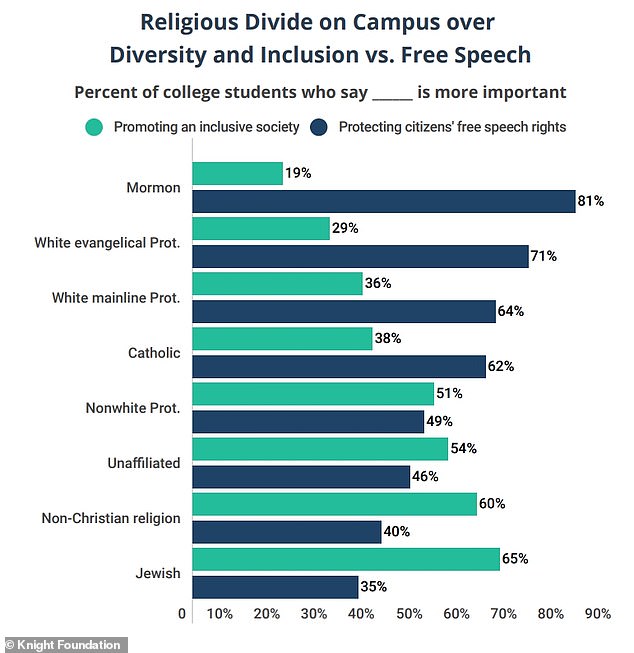 By comparison, a majority of Jewish students (65 percent) and non-religious students (54) said that inclusivity is more important than free speech.

In addition, just 39 percent of college students knew that freedom of speech is protected by the Constitution, according to a separate 2017 survey of 1,500 students by the Brookings Institution and UCLA.

Some 44 percent said free speech was not protected and an additional 16 percent said they didn’t know either way.

‘There’s no question that these young people are well intended and are doing exactly what their parents raised them to do,’ Paulson said. ‘You shouldn’t offend people of other races and faiths you shouldn’t go out of your way to hurt other peoples’ feelings. But the Constitution is about being able to live life to the fullest and that includes being able to say whatever you want.’

‘I’m absolutely convinced that the failure to honor and respect First Amendment freedoms comes from a lack of understanding,’ he added. ‘And all of our educators have to make a commitment to turn this around.’

Campus admin - January 24, 2020
0
© Newspaper WordPress Theme by TagDiv
We use cookies to ensure that we give you the best experience on our website. If you continue to use this site we will assume that you are happy with it.Ok