Boris Johnson was handed his first Parliamentary defeat since the general election today as the House of Lords defied him over Brexit.

The upper chamber backed a cross-party amendment to the European Union (Withdrawal Agreement) Bill seeking to force the Government to provide EU citizens with physical proof of their right to remain in the UK after January 31.

It was tabled by Liberal Democrat Lord Oates, who argued EU citizens covered by the settled status scheme should have the right to a physical form of proof of status instead of only the digital proof proposed by the Government.

He said that without physical documentation EU citizens eligible to remain in the UK would be ‘severely disadvantaged’ in dealings with landlords, airlines and other officials.

He denied it was an attempt to challenge Brexit or ‘frustrate’ the legislation, which has already passed through the Commons with big majorities ahead of Brexit day on January 31.

Afterwards Lord Oates said: ‘This amendment simply seeks to uphold the promise repeatedly made by Boris Johnson that the rights of EU citizens to remain in the UK would be automatically guaranteed.

‘It would remove the risk that those who failed to meet the cut off deadline would be automatically criminalised and subject to deportation.’ 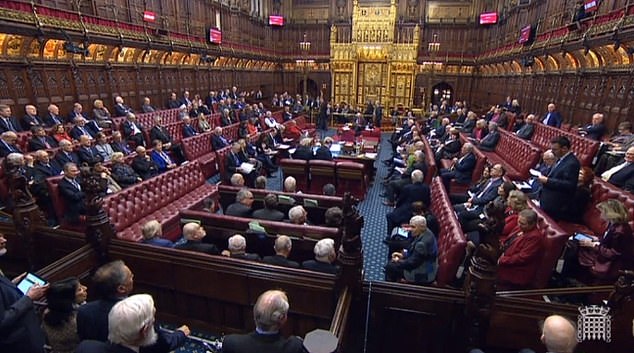 Lord Oates had earlier said the right to remain should also be based on eligibility and not forfeited by failing to meet an arbitrary deadline under a cut-off date in June 2021, which could lead to EU citizens being ‘criminalised’ afterwards.

What does the vote mean for Brexit Deal?

The vote by Lords this afternoon should be just a minor hiccup in the progress of the bill that does not delay Brexit at all.

Having been debated and voted on by MPs in the Commons earlier this month the European Union (Withdrawal Agreement) Bill is going through a similar process in the upper chamber.

If they had approved it unchanged it would then move on to being given Royal Assent by the Queen.

But as the Lords have registered that they wish it to be changed it will go back to the Commons for a fresh vote by MPs.

Despite losing by 41 votes in the Lords, Boris Johnson has a majority of 80 Tory loyalists on the green benches and they will simply throw out the Lords’ changes.

This will allow the WAB to swiftly move on to the Queen for her to approve it and keep the UK on course to leave the EU on January 31.

Without physical proof of right of residence, there was bound to be ‘confusion’ and ‘anxiety’ for such people in their dealings with officials post-Brexit.

‘In the real world, in respect of permanent residence, proof of immigration status is in physical documentation,’ Lord Oates said. ‘That’s what people are used to.

‘EU citizens are going to be severely disadvantaged if they don’t have it.’

Backing the demand, independent crossbencher Lord Warner questioned whether the Home Office computer system could be relied on to provide digital proof of status all the year round.

The independent crossbench peer said: ‘Agreeing our amendment need not delay Brexit, not does it require changes to the Withdrawal Agreement.’

Tory peer Viscount Ridley warned that the amendment could lead to the introduction of identity cards for EU citizens.

He said: ‘I think it’s not impossible that we would get to a situation, whether intended or not, whereby people would be asked to produce proof in this form if there was physical identity documentation in existence.

‘And it would, therefore, become by the backdoor an identity card required of EU citizens but not UK citizens.

‘That would seem to me to be a worrying development.’

Home Office minister Baroness Williams of Trafford had warned that the amendment could lead to ‘ID card creep’.

She said: ‘I totally agree with my noble friend, the noble Viscount Ridley, and his point about ID card creep is also part of this point.

‘And it’s exactly what happened to the Windrush generation.

‘The Government is adamant that we must avoid the situation where years down the line EU citizens who have built their lives here find themselves struggling to prove their rights and entitlements in the UK.’