The billionaire Hinduja brothers already own one of the most stupendous buildings in London — a 25-bedroom mansion just 400 yards from Buckingham Palace.

But I can disclose their plans to develop another of the capital’s landmarks — the immense Edwardian home of the old War Office — are now at the centre of a bizarre multi-million-pound court case.

It has been brought by London lawyer Vijay Goel, whose past roles included advising former Deputy PM Nick Clegg about emerging markets.

Srichand and Gopichand Hinduja, pictured, are planning to turn the former War Office in Whitehall into a luxury 125-bedroom hotel 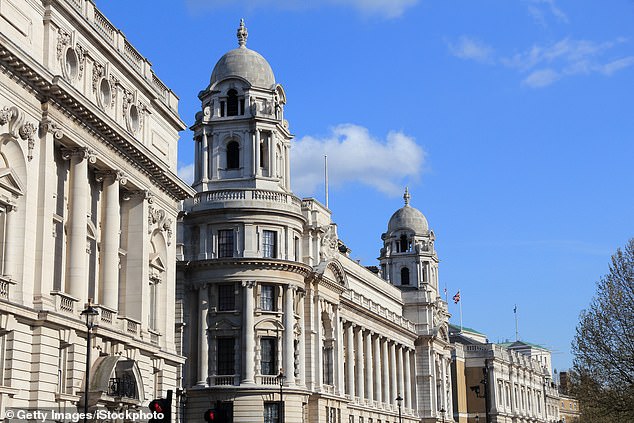 The Hindujas and their Spanish business partners paid the Ministry of Defence £350 million for the old War Office back in 2013, intending to convert its two miles of corridors and 1,100 rooms into a 125-bedroom Raffles hotel.

Goel, 45, aware that a top-notch developer would be needed for such a project, alleges that he introduced the Hindujas to construction firm Ardmore. He did so, he states in his High Court claim, after reaching an oral agreement with Cormac Byrne, Ardmore’s managing director, that he would receive payment worth 1 per cent of any contract which Ardmore made with the Hinduja Group — if Ardmore secured the deal to convert the old War Office.

More from Sebastian Shakespeare for the Daily Mail…

By October last year, claims Goel, Ardmore had indeed secured the contract — worth, he believes, £450 million. But by then, according to his High Court claim, Ardmore had sent him what it allegedly described as a ‘final’ version of its agreement with him.

This cut his fee from 1 per cent to half a per cent — meaning that he would receive around £2.25 million instead of £4.5 million.

Goel says he expressed ‘vehement disagreement’ with this, and is now seeking ‘approximately £4.5 million’. Ardmore are unmoved. ‘We are very disappointed to receive a claim from Mr. Goel, but it will be robustly defended,’ a spokesman tells me.

The Hindujas are not involved in the dispute between the builders and the alleged fixer.

Goel’s High Court documents describe him as a ‘former chairman of the London Chamber of Commerce’. Not so, says a spokesman for the organisation.

Demure Duchess upstaged by her lover

No stranger to a holistic approach to life, the Duchess of Rutland opened a wellness centre in 2018 at her family home, Belvoir Castle in Leicestershire.

This week, the 56-year-old was guest of honour at the opening of Ayurvie Sigiriya, a retreat in Sri Lanka. Joined by her partner and estate manager Phil Burtt, they wore traditional dress, with the Duchess in a royal blue and white sari.

Phil, 67, gave her a run for her money in a white sarong, blue jacket, hat and shoes. 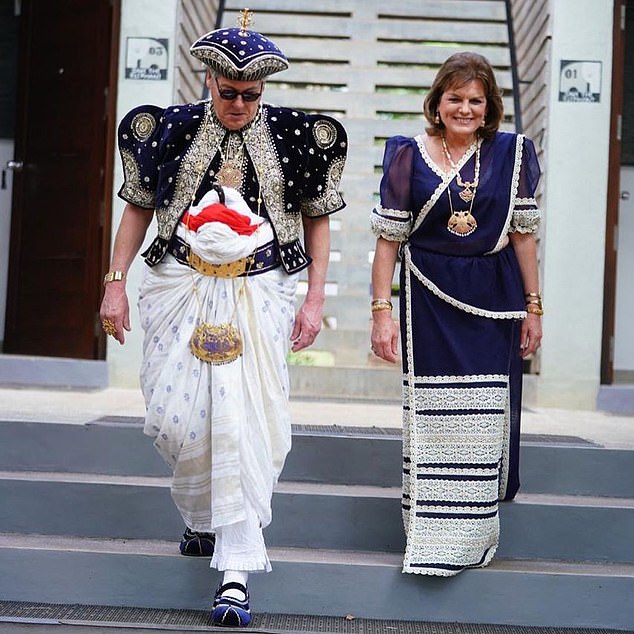 The Duchess of Rutland opened a wellness centre in 2018 at her family home, Belvoir Castle in Leicestershire. This week, the 56-year-old was guest of honour at the opening of Ayurvie Sigiriya, a retreat in Sri Lanka. Joined by her partner and estate manager Phil Burtt, they wore traditional dress, with the Duchess in a royal blue and white sari

The Queen will have been particularly pleased to invest Sir Michael Oswald with the Insignia of a Knight Grand Cross of the Royal Victorian Order at Sandringham last Friday. Not only is Sir Michael HM’s National Hunt racing representative, he was also the Queen Mother’s racing manager.

In 2009, he spoke out publicly to defend the Royals from criticism following the death of Princess Diana. He said the criticism had left the Queen Mum ‘hugely upset’.

Actress Elizabeth Hurley turned heads when she attended a friend’s party at a five-star hotel in India. The 54-year-old, who was at the 50th birthday of businessman Arvind Dubash, sported an eye-catching, sheer Julien MacDonald gown.

Her outing comes just days after the Royals star claimed she had qualms about exposing skin in public.

‘Most people are fine lying down, but when they stand up they want to cover up, including me,’ she said. ‘I like to cover up a lot. I certainly wouldn’t walk round a public beach parading in a bikini any more. I’m much too old. But, privately, of course.’ 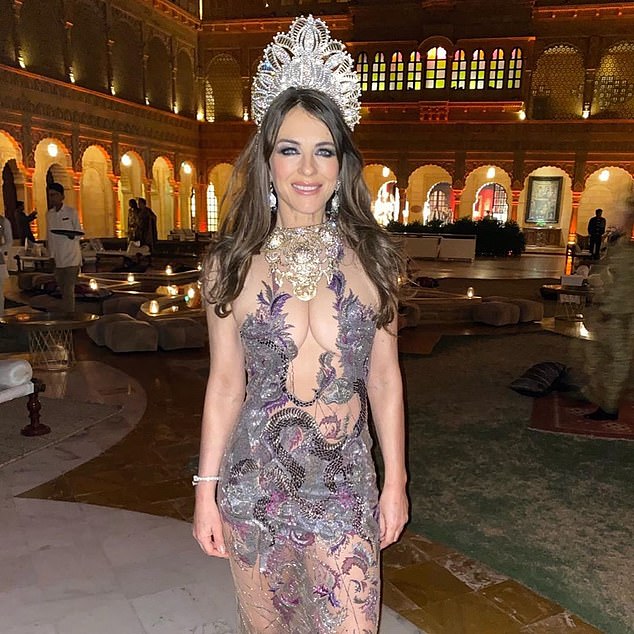 Lady Carnarvon has a corking idea

From vintage drama to vintage wine — the Countess of Carnarvon, the bubbly chatelaine of Highclere where Downton Abbey was filmed, is hoping to put a bit of fizz into the wine trade.

Just months after launching Highclere Gin, she is transforming a four-acre walled garden at her 350-year-old Hampshire pile into a vineyard. ‘Chardonnay grapes are planted in the top two quadrants and Pinot Noir in the lower two so that, hopefully, we will be able to pick and make a delicious sparkling wine in years to come,’ she explains.

‘Due to climate change, the champagne houses in France are buying up land in Southern England. There were vineyards here in Roman times.’

Rufus Sewell stars in Agatha Christie’s The Pale Horse on the BBC, featuring murderous witches in the Home Counties.

Which must have made a refreshing change from working with Oscar winner Renee Zellweger in the biopic, Judy. ‘First day on set, Renee came up to me to say hi, all done up just like Judy Garland, with the teeth, the hair, the whole lot,’ says Sewell. ‘It was bizarre. So the person I met was this strange mix of the two. Eventually, I met the real Renee, who was lovely.’

With a castle for a home and a fleet of motorbikes, Richard Hammond is by no means strapped for cash.

But ‘The Hamster’ and his wife, Amanda, have decided to rein things in somewhat after slashing their pay in half.

Accounts for his company, Hamster’s Wheel, show The Grand Tour presenter cut his dividend payout to £727,500, having enjoyed a payout of £1.8 million the year before.

Reserves in the company have also taken a hit, slipping from just under £1.8 million to £1.45 million. 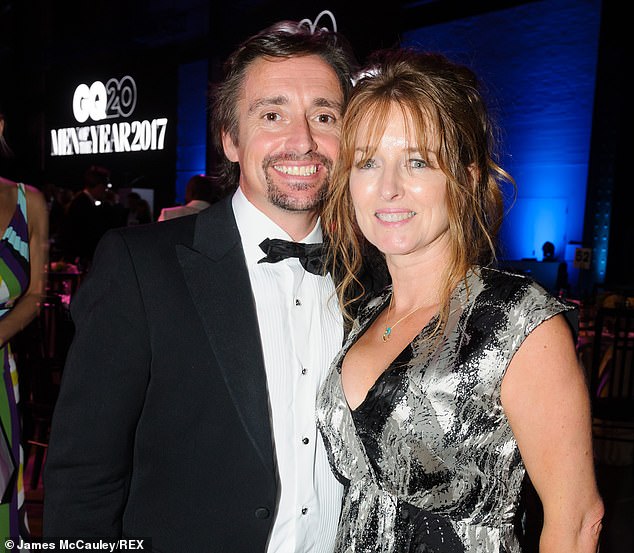 The Grand Tour star, pictured with his wife Mindy, saw his pay from the Amazon show cut in half according to newly filed company accounts

Emotional Ben Affleck reflects on his ‘painful’ divorce and alcoholism

Emotional Ben Affleck reflects on his ‘painful’ divorce and alcoholism