Trinny Woodall and Susannah Constantine have revealed they both went into a period of mourning when their presenting partnership ended six years ago.

Trinny, 56, admitted their relationship was ‘like a marriage’ and she grieved when it ended in 2014 around the same time her ex-husband Johnny Elichaoff died, even appearing to admit she sought help from a counsellor or therapist.

Speaking on her podcast My Wardrobe Malfunction, Susannah, 57, said: ‘I remember you saying that you had gone to see someone, and they said you were mourning two things – you were mourning Johnny and also the end of our partnership.’

Trinny admitted there were times she ‘hated’ Susannah, but that their relationship was ‘like a marriage’ because they loved and knew each other so well.

The duo first worked together in 1994 before finding fame in 2001 when they presented BBC’s What Not To Wear. They defected to ITV in 2006 with their show Trinny and Susannah undress.

Trinny Woodall and Susannah Constantine, pictured during the launch of their Littlewoods campaign in 2008, revealed they both went into mourning when they split

After years of touring the world teaching the public how to dress, the pair went their separate ways.

Susannah took part in I’m a Celebrity… Get Me Out Of Here!, Strictly Come Dancing, published a novel and started her podcast.

Meanwhile Trinny began her eponymous makeup brand which she now runs alongside occasionally presenting the fashion segment on This Morning.

But soon after their split a therapist told Trinny she was mourning both the end of the partnership and the death of her ex-husband Johnny Elichaoff’s, who she’d remained on good terms with.

Trinny said: ‘I remember that woman I went to see, exactly that thing. Our relationship was a marriage. I love you and hate you in total measures.

‘You probably totally love me and I totally love you, but we know each other so well, and the ease of that now when you’re not every day working together.

Since their partnership ended in 2014 Susannah, pictured left on Good Morning Britain last year has written a novel while Trinny, pictured right in January, started a beauty brand

‘When we were working together there were days when it would just kill you. That habit they have, like “Why are you doing that again, why are you acting out again”.’

Susannah completely agreed as she admitted she had to learn to organise her own life after they stopped working together following a tour of Finland and Germany.

‘I didn’t really get that. But now I look back, I went through the same thing, through a period of mourning and insecurity,’ she revealed.

‘It was literally like my right side had been taken away from me. It’s taken a long time to find out who I am without you.’

Trinny, who now runs a flourishing makeup business, TRINNY LONDON, used to make sure Susannah was on time for trains and remembered to put makeup on.

Susannah added: ‘You get so used to someone being really good at something, knowing your weaknesses and someone fills that hole of your weakness. I’ve relied on you to be organised.’ 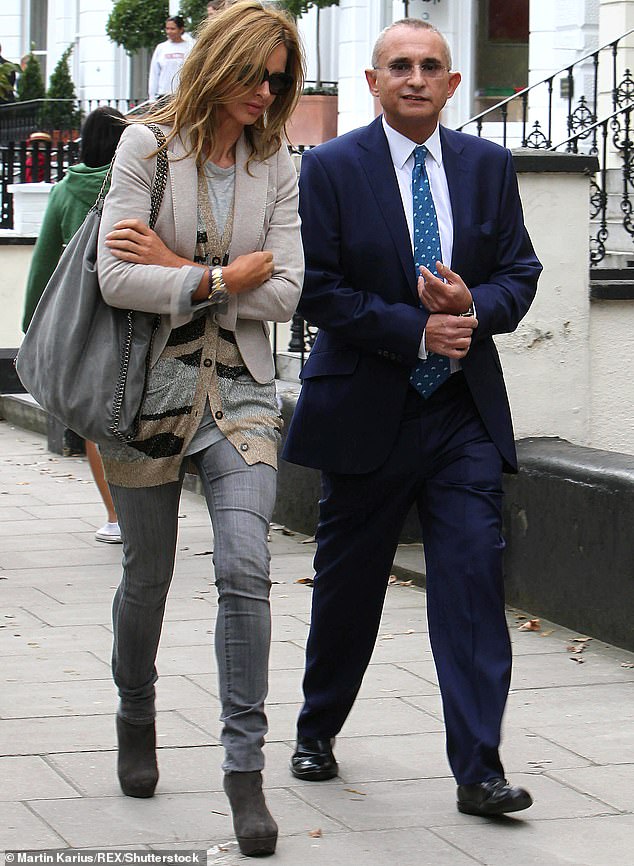 Trinny, pictured with her ex husband Johnny the year after their divorce, went on to describe a coincidence that ‘connects’ her ex husband  and her new beau Charles Saatchi, 76

While she used to procrastinate and was ‘quite OCD’, Susannah is now militant with keeping on top of life admin.

She said: ‘If I’ve got to do something, I now get up and I do it. I’m much more organised than I used to be because I used to rely on you for everything.

‘I relied on you to be tidy and make sure we got to the train on time and all of that.

‘And now I’m militant in that area of my life. It’s a side that was always there but I never needed to use it until you and I weren’t together.’

Similarly, Trinny admitted she discovered how to be funny when she struck out on her own – after suppressing her lighter side because Susannah was always there to be ‘the emotionally-cuddly one’.

She said: ‘I’ve learnt the opposite things but things that I was lacking. I’ve learnt how to be funny.

‘Half of how I do it now is being with you long enough to learn it. You push it down because you have someone who has done it.’

Trinny’s next big lesson was how to be kinder to the people around her, something she said Susannah was always good at.

‘The other thing probably is to acknowledge when people have done things well and to be kind,’ she said.

‘I didn’t have so much time for kindness and you would be the one who was. I would do secret kindness but you were also politely very nicely kind.

‘I would get riled up and you would be calm. But then occasionally, you would break and I would think: “Wow a relief.”’

Trinny went on to describe a coincidence that ‘connects’ her ex husband – they divorced in 2009 and Johnny went on to kill himself in 2014 – and her new beau Charles Saatchi, 76.

She said: ‘This is the irony. On our tenth wedding anniversary, the year we split up – we had been together 16 years – Johnny bought me this (necklace) and every little charm was significant in our marriage.’ 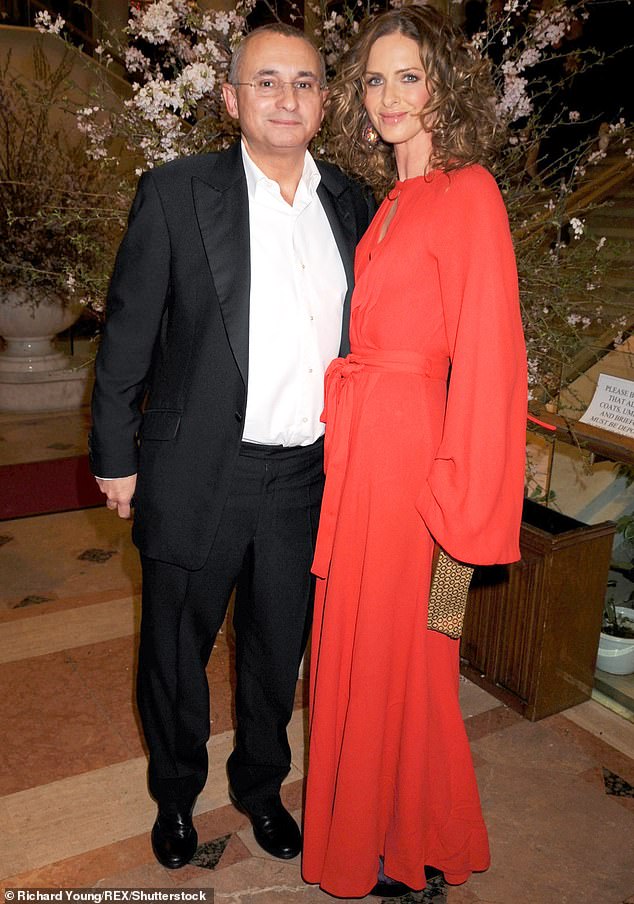 Both Susannah and Trinny’s daughter Lyla Elichaoff, 16, bought a charm which she added to the necklace.

She continued: ‘Then, the year I got together with Charles, for Christmas, he gave me exactly the same.

‘He had gone and chosen all the charms and he put them on and his daughter had got me a little present, a little ring, which I put on there too.

‘So I have two. Not the same charms but it was so weird. Of all the things, Charles who never gives gifts, and Johnny, who would rather throw money at something and not think about it, was so thoughtful. 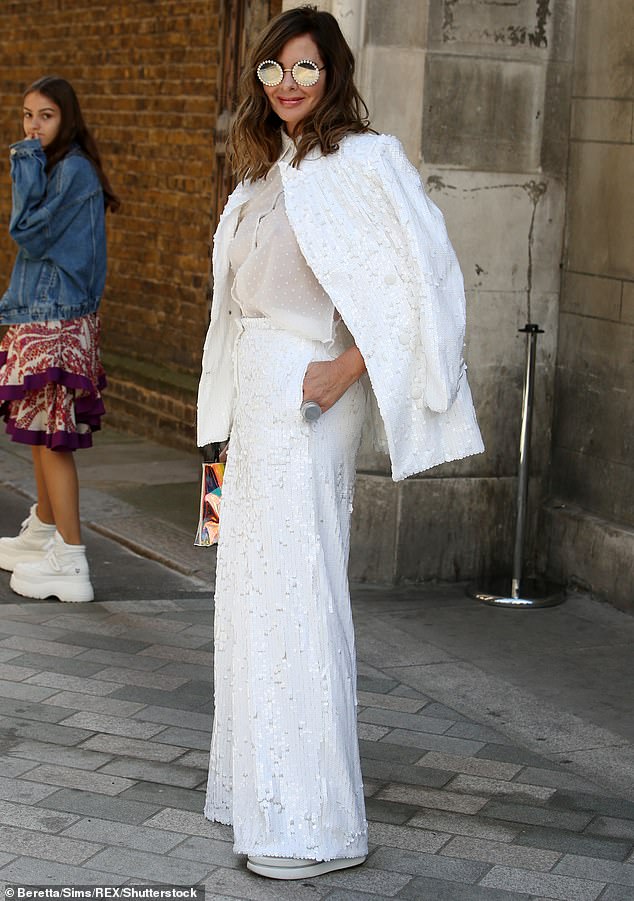 Trinny joined the audience at the Roland Mouret show in September last year. Susannah said she was proud of Trinny in her podcast

‘It’s so odd. There are a few things which connect them.’

Gushing over their friendship since the split, Susannah said she was proud of Trinny for starting her business.

The pair agreed they could not have had ‘third careers’ if it hadn’t been for the end of their working relationship.

Susannah said: This is the first time we’ve done anything work wise together.

‘I cannot tell you how proud I am of my friend. There are 50 people working for her in the most exquisite place.

‘If we had been still together this would never have happened.

‘That’s true. It was not until we were both over 50 that we all had this third career.

‘The hardest part is getting it out of your head and onto the table.’

Tesco limits customers to just ONE item of milk, bread and toilet roll each

Tesco limits customers to just ONE item of milk, bread and toilet roll each

Experts warn US coronavirus hotspots including Detroit and New Orleans could be WORSE than...