British child, nine, is infected with coronavirus during skiing holiday with his family in Bulgaria

By Tim Stickings For Mailonline

A nine-year-old British child has tested positive for coronavirus during a ski holiday in Bulgaria, local media said today.

The youngster and his family were tested for the pathogen after they arrived at a ski resort in Bansko on Friday.

Officials placed the whole family in quarantine because the child’s uncle had been in contact with his sister who was known to be a virus patient.

The two adults and three children were all screened for the virus, but only the nine-year-old child has tested positive, Bulgarian National Radio reported.

‘The samples turned out to be four negative yesterday. The nine-year-old is positive for coronavirus,’ a regional health official said.

None of them are in hospital at the moment and they will be allowed to return to England after 14 days if there are no complications, the official said.

Separately, a 78-year-old Briton is also being tested after showing possible virus symptoms, according to Bulgarian media.

Bulgaria’s attorney general Ivan Geshev has called for all ski resorts in the country to be closed.

Local authorities in Bansko have also urged hotels not to accept any new guests.

Bulgarian media described the nine-year-old as the 52nd virus patient in the country, which has recorded two deaths from the disease. 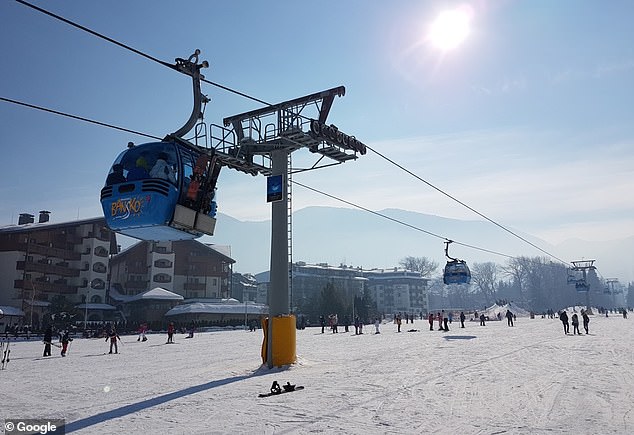 The country’s parliament has declared a state of emergency to run until April 13, paving the way for more drastic measures.

In a subsequent order, Health Minister Kiril Ananiev ordered the closure of shops – except food stores and pharmacies – with immediate effect until March 29.

Shopping malls, casinos, bars and restaurants have also been shut down, along with schools, universities, kindergartens, theatres, cinemas, concert halls and stadiums.

The football union had already said that it was cancelling league games until April 13.

Bulgaria reported its first two cases of the coronavirus on March 8 and has since tested more than 1,400 people.

The state of emergency decree was proposed by the country’s coronavirus task force in a late-night session with the government on Thursday.

Parliament responded swiftly, passing changes to the penal code on Friday that include fines of 1,000 to 10,000 leva (£460 to £4,600) and jail sentences of up to three years for people who violate public orders.

The Bachelor’s Madison Prewett denies Connor Saeli dating rumors: ‘I am just focusing on myself’