Late last year, Jesy Nelson detailed her horrific trolling ordeal for the first time – which clouded her perception of success, left her in a ‘deep depression‘ and even caused her to attempt suicide.

Six months on from the release of her BBC documentary, Odd One Out, the Little Mix star, 28, has revealed she’s ‘still working on herself’ but is now ‘mentally stronger’ than ever before in an exclusive interview with MailOnline.

Jesy – who released her new single Break Up Song with bandmates Perrie Edwards, Leigh-Anne Pinnock and Jade Thirlwall on Friday – admitted she was inspired to share her story after resonating with Amy Schumer‘s comedy film I Feel Pretty, and would often compare herself to her fellow group members while struggling with fame.

‘I feel a lot lighter’: Jesy Nelson has revealed she’s ‘still working on herself’ but is now ‘mentally stronger’ than ever before  after releasing her documentary in an interview with MailOnline

The musician’s documentary explored how trolls, who mocked her over her looks and weight, triggered her into attempting to take her own life in 2013.

The hard-hitting programme earned the brave star a trophy in the Factual category at this year’s National Television Awards, after breaking BBC Three viewing records.

Jesy has revealed the powerful film was born after identifying with comedian Amy’s character Renee Bennett in 2018’s I Feel Pretty, which follows the story of an insecure woman who begins to believe she looks like a supermodel after hitting her head during a spin class.

‘We were away on tour and I was sitting in a hotel room called I Feel Pretty with Amy Schumer’, she told MailOnline. ‘There’s a part in the film where someone gets chatted up, and Amy’s character goes up to her and says, “What does that feel like?” 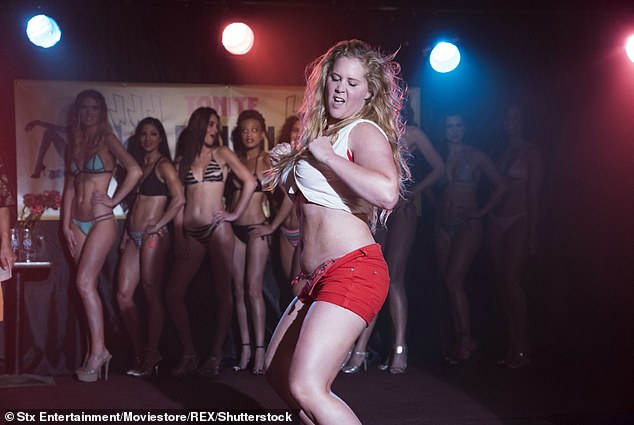 ‘I resonated with her character’: The Little Mix singer, 28, admitted she was inspired to share her story after identifying with Amy Schumer’s comedy film I Feel Pretty (pictured) 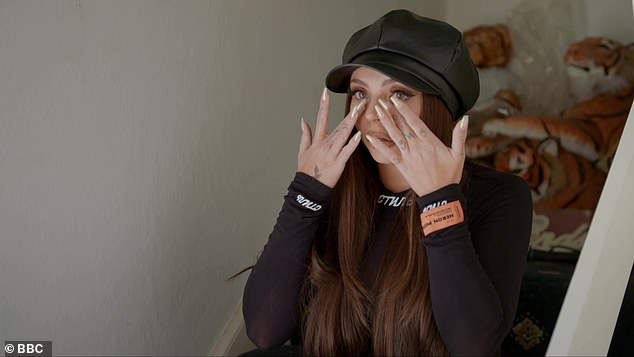 Emotional: Last year, Jesy shared her trolling ordeal for the first time – which clouded her perception of success, left her in a ‘deep depression’ and even caused her to attempt suicide 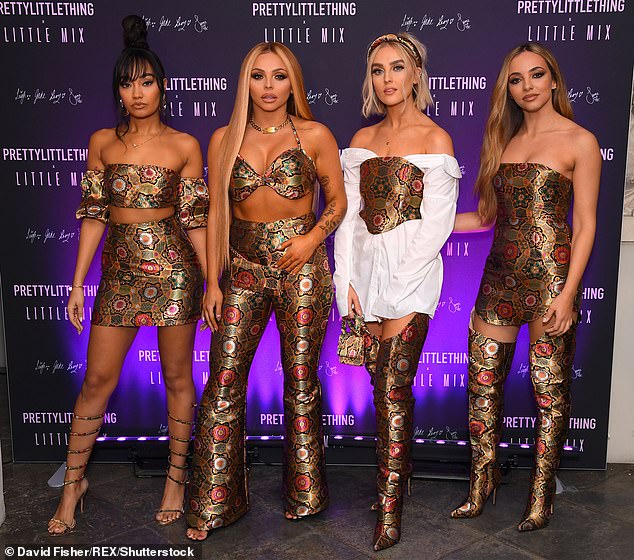 ‘The woman responds, “It feels the same as when you do”, but Amy replies, “I don’t get chatted up.”

‘Amy later says, “I wonder how it feels to wake up and feel pretty everyday?”‘, the Woman Like Me hitmaker added, before highlighting that the scene echoed her feelings about herself.

Jesy elaborated: ‘I know it sounds really pathetic but that line really resonated with me. A few years ago, that’s exactly how I felt with the girls [Perrie, 26, Jade, 27, and Leigh-Anne, 28].

‘I used to stare at them when we were getting ready and think, “Oh my God, I just want to be like you.”‘

‘I wonder how it feels to wake up and feel pretty’: Jesy revealed the film was born after identifying with comedian Amy’s character Renee Bennett (pictured with Emily Ratajkowski)

Admitting that she aimed to share her experience in a bid to help others, the Romford native added: ‘There must be so many girls that feel like that.

‘I’ve gone through this massive journey and come out the other side but no one knew about that s**t time. So I rung up my friend Adam [Goodall, the film’s director], who didn’t even know the extent of how I felt about myself, and just told him.

‘He came over my house the next day and started filming!’

Jesy – who insisted she wanted to include ‘so much more footage’ into the project – said the ‘draining and depressing’ process took six months to record, which she now views as ‘therapeutic’. 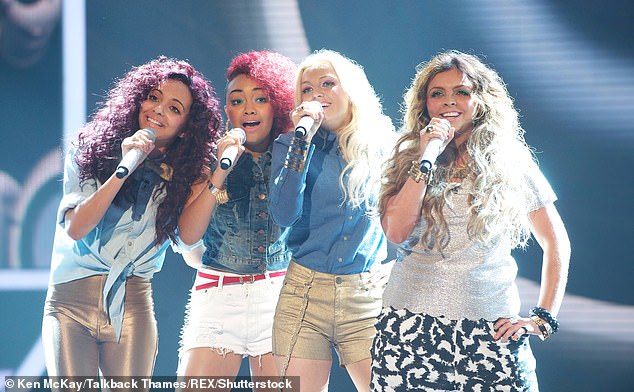 Difficult times: ‘I know it sounds really pathetic but that line really resonated with me. A few years ago, that’s exactly how I felt with the girls’, she explained (pictured in 2011)

‘We filmed stuff with another troll, who used to write things about me online but that never got put in.

‘It’s weird, me and my mum have only watched it once – when it came out – and once more recently. It felt like I did it ages ago, it was the weirdest form of therapy.’

Jesy’s journey to stardom kicked off when she participated on the 2011 edition of The X Factor, which saw Little Mix – formerly known as Rhythmix – become the first-ever group to win the competition series.

While her success would be rewarding for any aspiring artist, she confessed her career was somewhat marred by the online abuse she received. 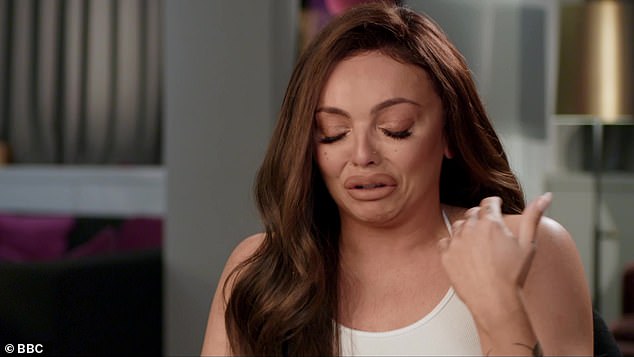 ‘It was the weirdest form of therapy’: The songstress said the ‘draining and depressing’ process took six months to record, which she now views as ‘therapeutic’

The media personality explained: ‘For me, [the online abuse] happened everyday during X Factor. I never wanted Twitter either but we had to have it.

‘I think because we were a girl group, there was such a stigma, so we had to engage with fans – social media was such a big part of our journey. It was s*** but heyho, you go through things in life and it makes you stronger.’

On where she stands now with her mental health, the Shout Out To My Ex hitmaker told us: ‘It was a massive weight carried on my shoulders, but now everyone knows, it might sound a bit cheesy but I feel a lot lighter, and mentally stronger.

‘I would never say I love myself completely and feel so much better, because I don’t. It’s something I’m still working on and hopefully I am going to overcome it. I am definitely getting there.’

Jesy revealed she put her foot down in a bid to portray a ‘real’ message, especially when the BBC encouraged her to round off her programme with a ‘more positive ending’.

‘I told the BBC that this documentary has to be so real. I didn’t want to p****foot around or sugarcoat things, I wanted to do things properly’, she said.

‘There were points when they told me that I need to make the ending more positive, but I told them that I’m not going to be fake and that’s not a real message. It’s so important to be true to yourself.’

The brunette enthused she’s been overwhelmed by the show’s reception, with parents expressing their gratitude for her bravery. 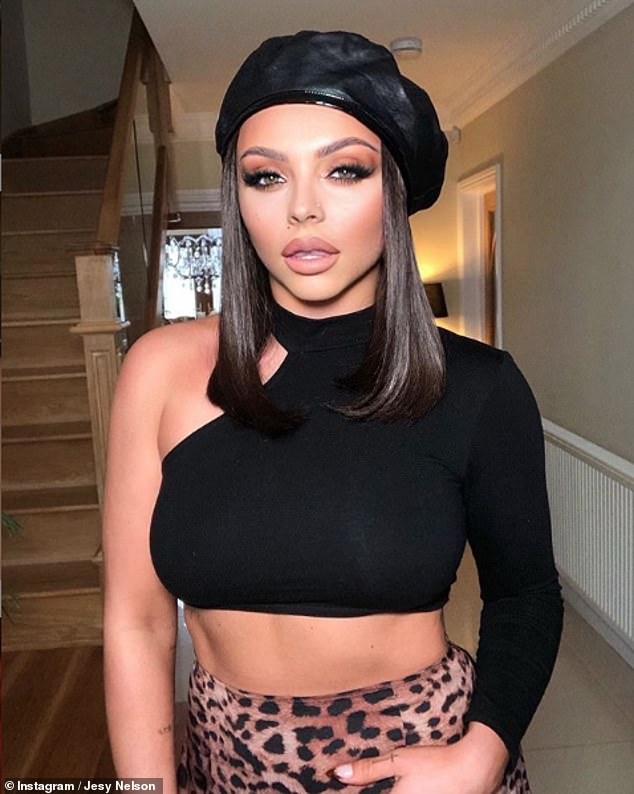 ‘I didn’t want to p****foot around things’: Jesy put her foot down in a bid to portray a ‘real’ message, especially when the BBC encouraged her to round off her show with a ‘more positive ending’

She added: ‘If I didn’t go through it, I wouldn’t have been able to make this documentary and help other people.

‘I get so many messages from parents, even when I go in the street. Teachers tell me that they’ve made it part of the curriculum at school, which is incredible.’

On whether she’d be keen on creating more documentaries, the songstress said: ‘It was a draining and depressing time filming it, but I feel like if there’s a subject that I feel passionate about then I would do it as I did enjoy it. I wouldn’t ever rule it out.’

Next up for Little Mix is their new talent show The Search, which Jesy revealed could be pushed back due to the coronavirus pandemic. 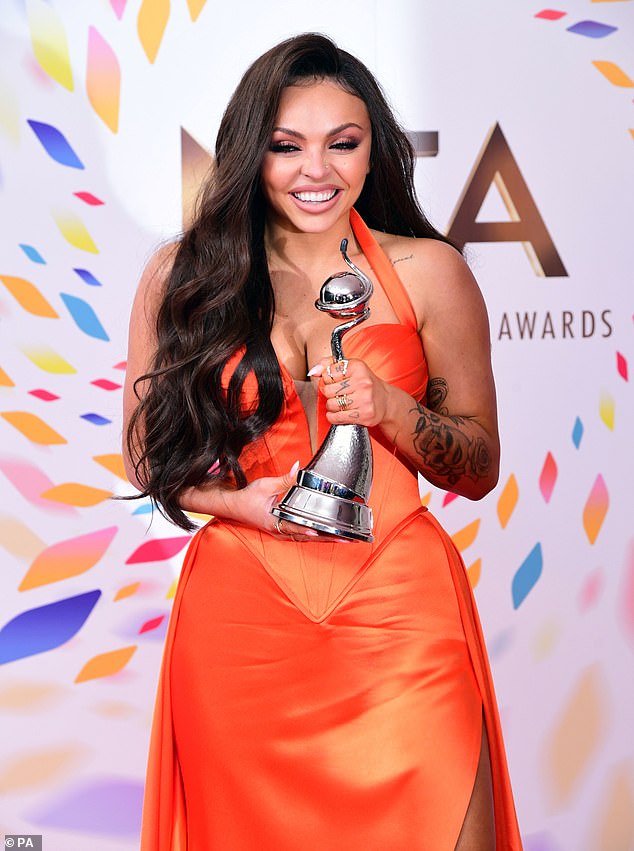 ‘They’ve made it part of the school curriculum!’ Jesy is overwhelmed by the programme’s reception (pictured holding her Factual Award for the show at the NTAs in January)

On the competition – currently scheduled to air next month – the Black Magic singer said: ‘All the auditions are pre-recorded, but we don’t know when it’ll come out now as it has to come out with the live shows shortly after.

‘If the live shows get pushed back then I assume the auditions will too.’

Jesy went on to tease details about the group’s debut programme: ‘I’m not just saying this because it’s our show, but the talent is f*****g incredible! It’s insane.

‘We are so lucky to have these people on our show as their voices are incredible. It’s really fresh, the whole set-up feels like it’s in the future. I know if I wasn’t in Little Mix, I’d be really excited to watch it.

‘There’s so many different categories – an R&B group, a boy band, a girl dance group – no one has ever done that before!’

Admitting their new single is inspired by her own splits, Jesy said: ‘I feel there’s like stages of a break-up. 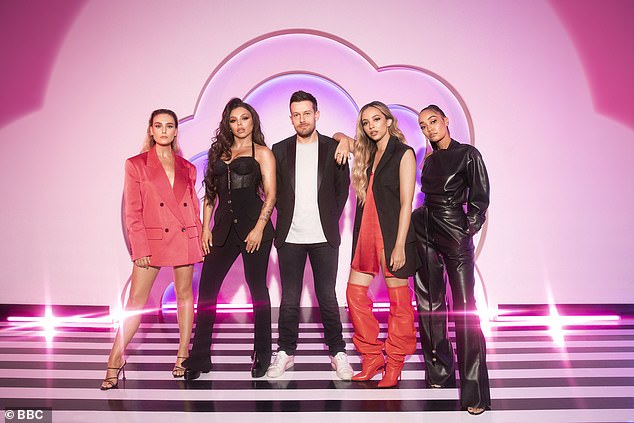 Up in the air: Next up for Little Mix is their talent show The Search, which Jesy revealed could be pushed back due to the coronavirus pandemic (pictured with host Chris Ramsey)

‘First you’re really upset and want to be alone and cry. The second stage is when your friends come round and lift your spirits up, encourage you and take you out to the club.

‘Stage three is going out again and looking good, your ex realises [what he’s missing] and tries to come back to you! I feel it’s so natural to go through those stages.

‘For me personally, I can’t just get over it. I have to have my time to cry and be with my friends. I will always write down the things that were awful about them – that really helps me [laughs]!’

If you’re struggling and need to talk, you can contact the Samaritans for free at any time on 116 123, or email Jo@samaritans.org. 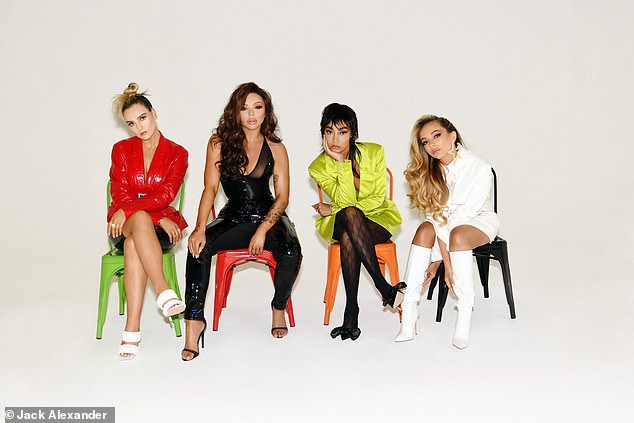 There’s no stopping them: Little Mix have released their new track called Break Up Song, which Jesy revealed was inspired by her past splits

Jesy Nelson EXC: Star reveals her Odd One Out film was inspired by I...

Jared Leto shows his love for the Netflix series Tiger King by dressing up...

Thugs are jailed for total of more than 26 years after filming themselves stabbing...