Social care bosses have criticised the government’s handling of the coronavirus crisis as shambolic.

A leaked letter from the Association of Directors of Adult Social Services (Adass) to the Department of Health and Social Care says Downing Street has caused ‘confusion and additional workload’ through mixed messages.

The letter was written on Saturday and leaked to the BBC and says early deliveries of PPE have been ‘paltry’ with more recent drops ‘haphazard’.

Pictured: Health Secretary Matt Hancock with the ‘badge of honour’ for care workers as he faces criticism for the Government’s handling of the crisis

As care workers have repeatedly raised concerns that they are being forgotten about during the crisis, the letter has revealed that some PPE meant for care workers is being confiscated by border control then sent to the NHS.

Though it welcomes the rolling out of testing for care workers, it says that it is being done without thought as to what the sector will do with the results.

Adass criticised the government for recruiting volunteers, saying it ‘diverted 750,000 volunteers away from supporting local communities and left them with nothing to do for the first three weeks’. 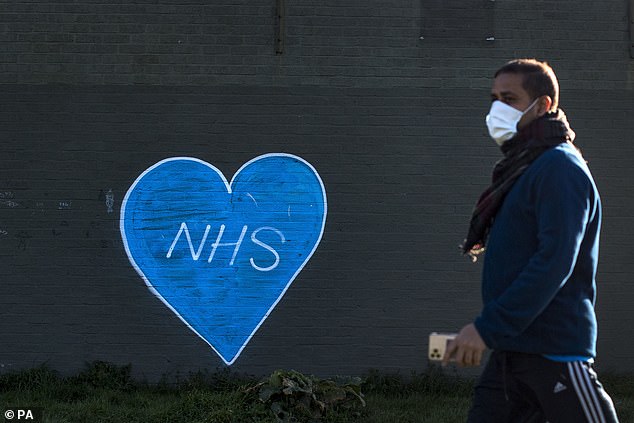 The group calls it ‘shameful that this was not done in collaboration with local government’. It accuses Whitehall of not giving the care sector the same consideration as the NHS.

A spokesperson for Adass said: ‘We know everybody is working tirelessly to try to make this as effective as they can be in the face of something that we have never faced before. It’s really important that the dynamics between local and national government are right.’

A Department of Health spokesperson said the government’s ‘comprehensive action plan to support the adult social care sector’ in England included ‘ramping up testing, overhauling the way PPE is being delivered to care homes and helping to minimise the spread of the virus to keep people safe’.

‘We will continue to work closely with the social care sector to ensure they have everything they need to respond to this outbreak and receive the recognition they deserve,’ they added.

It comes after official figures revealed yesterday a quarter of all coronavirus deaths in Scotland have been in care homes.

Data from the National Records of Scotland showed 962 people diagnosed with, or suspected of having, COVID-19 had died.

First Minister Nicola Sturgeon also said yesterday that 433 care homes – about 40 per cent of all those in Scotland – have now reported cases of the virus.

By Sophie Borland and Tom Kelly for the Daily Mail

Care home staff are to be recognised for their heroic work in the pandemic. Following a campaign by the Daily Mail, Matt Hancock has promised to put them on the same footing as NHS doctors and nurses.

This newspaper has revealed in a series of harrowing stories that care home residents are the forgotten victims of coronavirus, left to die in huge numbers.

Health Secretary Mr Hancock vowed a set of measures to alleviate the dire situation in the nation’s 11,000 care homes. 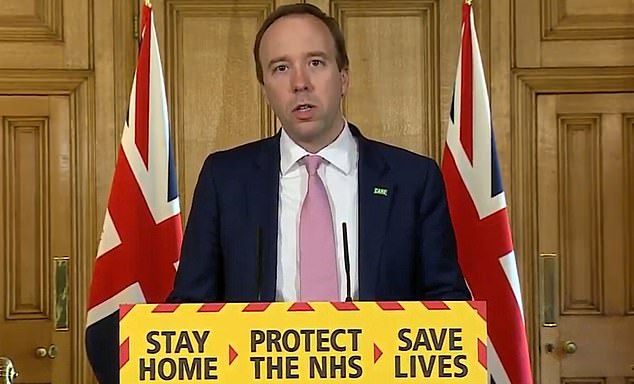 Health Secretary Matt Hancock pictured at the daily coronavirus press briefing from Downing Street on Wednesday, wearing one of the badges with green CARE logos

Families will again have the right to say goodbye to their dying loved ones and there will be a blanket ban on Do Not Resuscitate orders.

To tackle chronic under-staffing, a drive will be mounted to recruit 20,000 employees within three months.

And Mr Hancock has vowed to increase the amount of personal protective kit given to homes and to offer testing to all residents and staff with symptoms.

Crucially he unveiled a ‘single brand’ for the social care workforce in the hope of instilling the same level as pride as in the NHS. Badges with green CARE logos will be sent to staff over the next few weeks enabling them to access free coffees as well as discounts at stores and cafes.

As with Mr Hancock’s bold target on testing – to boost capacity to 100,000 a day by May – the Health Secretary will be held to account on his promises.

Yesterday brought more distressing reports from care homes, with one in Peterborough revealing that a third of its residents had died in ten days. In a Staffordshire home, 24 of the 140 residents died over three weeks.

The badges (above) will be sent to social care staff over the next few weeks, enabling them to access free coffees as well as discounts at stores and cafes

It has emerged that residents who are seriously ill with coronavirus will not be taken to hospital if doctors decide it is ‘inappropriate’. Guidelines have been issued to managers warning them that ambulances will refuse to take patients to hospital if ‘conservative care’ at a care home is deemed preferable.

As confirmed cases of the virus passed two million worldwide, with more than 131,000 deaths:

The Mail has campaigned for better recognition for care homes battling the virus. We have revealed how some of the biggest providers had been denied tests for residents or staff even though they are offered to NHS workers.

Other homes told us they were playing ‘Russian roulette’ by being forced to accept from hospital patients with virus symptoms.

Some staff claimed that GPs were refusing to visit and admitted being terrified of catching the virus due to a lack of protective clothing.

Mr Hancock said that wherever possible families would be given the chance to say goodbye to loved ones dying with coronavirus in care homes or indeed hospitals. He told the Downing Street press briefing that he would work with Public Health England and the care sector to try to limit the risk of infection.

The Health Secretary also said the Government was making it clear that blanket Do Not Resuscitate orders should not be applied to care home residents.

Other measures include plans for care home residents and hospital patients to be able to speak to their loved ones through Facebook. 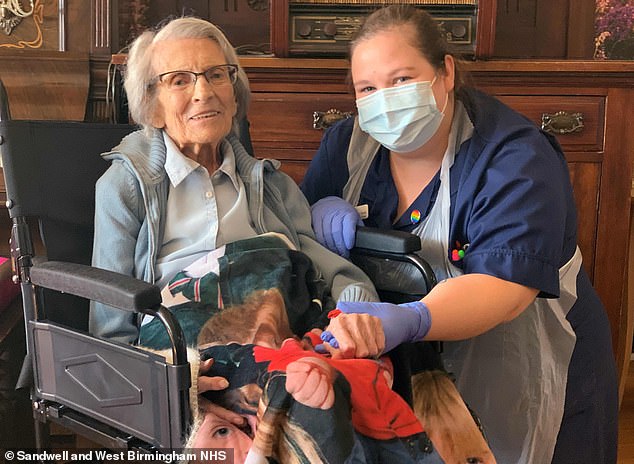 Connie Titchen (left), a 106-year-old recovered coroanvirus patient, with Sister Kelly Smith, wearing PPE. Ms Titchen was discharged on Wednesday to a round of applause from carers 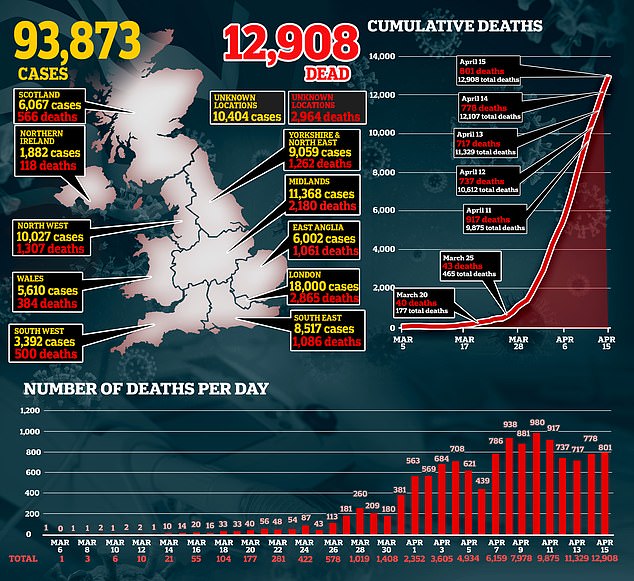 Referring to the ‘CARE’ brand, Mr Hancock said: ‘This badge will be a badge of honour in a very real sense, allowing social care staff proudly and publicly to identify themselves, just like NHS staff do.’

Figures from the Office for National Statistics showed there had been just 237 deaths in care homes in two weeks. Some charities believe the true number is nearer 4,000.

Liz Kendall, Labour’s social care spokesman, said: ‘For millions of elderly and disabled people and their families, actions will speak louder than words. We need a clear and detailed plan about how – and by when – the Government is going to test more than 1.2million front-line social care workers, up from only 505 who have been tested so far.

‘More still needs to be done to ensure enough PPE regularly gets to front-line staff, who are desperate not to infect the elderly and disabled people they care for.’

Kate Lee of the Alzheimer’s Society said: ‘What’s missing from the Government’s plan is a commitment to accurately record and publish coronavirus deaths in care homes on a daily basis.

‘Without this we can’t know the scale of the crisis we’re dealing with, and whether PPE and testing are working.’

Dave Prentis of Unison, which represents many care workers, said: ‘For all the warm words and promises about supplies of protective equipment, the situation appears to be getting worse, not better.’

What are the best duvet COVERS and how do they affect a better sleep?

I paid lunch fees ahead of lockdown but the nursery won’t refund me the money – what can I do?

Johnny Depp’s friend Paul Bettany, his assistant and two LA cops are due to...

Dentists reopen today amid fears patients will face extra fees to pay for £25...

What are the best duvet COVERS and how do they affect...

I paid lunch fees ahead of lockdown but the nursery won’t...