In 2004 a group led by Simon Mann allegedly tried to overthrow the ­tyrannical Teodoro Obiang, president of ­Equatorial Guinea.

They were accused of working for investors who wanted to seize control of Africa’s third largest oil producer.

But today, Mann, who ­survived five and a half years’ incarceration in two of Africa’s worst prisons, is now trying to help others.

In 2004 a group led by Simon Mann allegedly tried to overthrow the ­tyrannical Teodoro Obiang, president of ­Equatorial Guinea. They were accused of working for investors who wanted to seize control of Africa’s third largest oil producer

He is putting himself at the service of anyone seeking advice about ­coping with lockdown — free of charge — via regular Q&A online sessions through video platform Zoom. ‘Your loss of freedom is very shocking, like a death,’ Mann tells me, before explaining why he’s offering help. ‘My imprisonment was my fault. I’d messed up; people now haven’t messed up.’

His first session attracted ­questions from South Africa and the USA, as well as in Britain.

‘People are grappling with how they deal with this,’ reflects Mann who has made his ‘Crisis Survival Checklist’ available on his website. 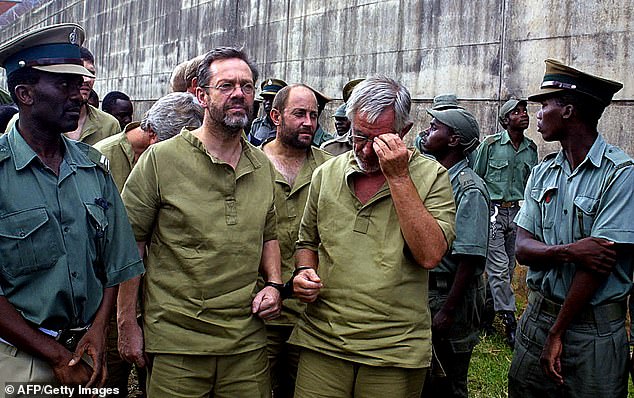 Mann, 67, who is self-isolating with his wife, Amanda, and three of their four children, was extradited to Equatorial Guinea in 2008

It stresses the need for what he describes as the Four Legs for ­Survival: routine, exercise, creativity and keeping a diary or log-book.

‘You have to make your world the people and the place of your ­confinement,’ adds Mann, ‘and to stop constantly thinking, “at this time we should be doing this or that, and the kids should be going back to school”. Those thoughts are the ones that hurt you.’

His own world was reduced to a cell ‘6ft wide and seven paces long — when wearing leg-irons’. His routine involved altering the layout of his few belongings each morning and evening, while his fitness regime included running a half marathon inside Zimbabwe’s Chikurubi Prison — ‘800 circuits of the yard’.

Mann, 67, who is self-isolating with his wife, Amanda, and three of their four children, was extradited to Equatorial Guinea in 2008.

President Obiang was promising to drag Mann’s naked body through the streets, having first eaten his testicles.

Instead, Mann, who conducts his next Q&A session today at 6pm, was sentenced to 32 years, but was released 18 months later after receiving a presidential pardon. 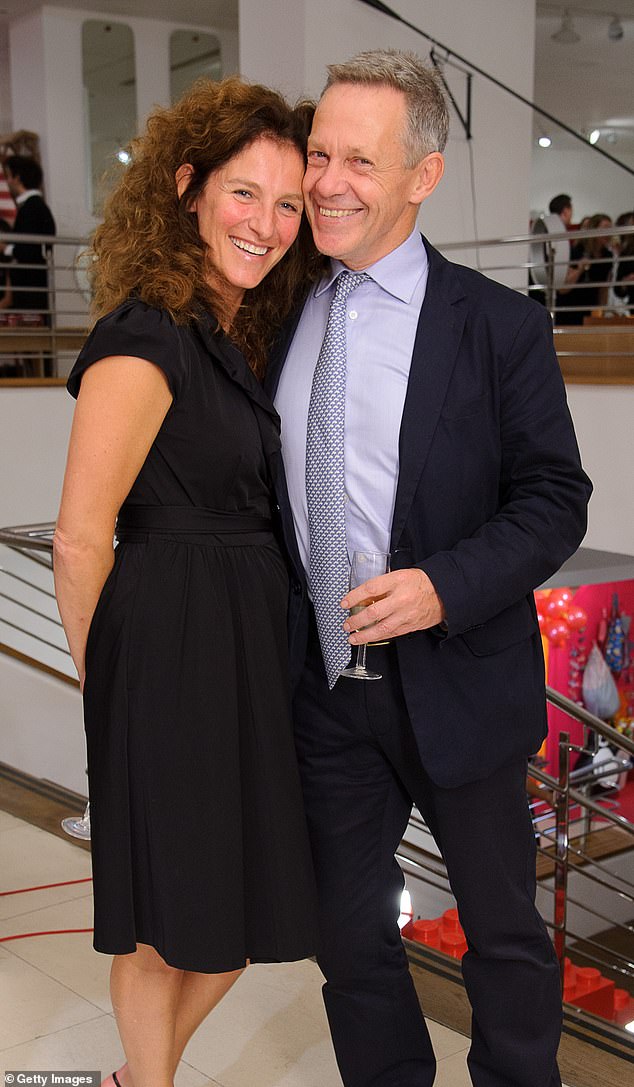 With theatres closed and film shoots cancelled, many actors are at a loose end. But Rupert Everett has other ambitions to follow.

He’s putting the finishing touches to his ‘unflinchingly honest’ third volume of memoirs, entitled Tainted Glory, focusing on how he realised his life’s grand passion — his wish to make a film about Oscar Wilde’s last few days, The Happy Prince.

Who’s the yoga master… Frankie, or her pooch?

Now that’s what I call the ‘downward dog’. Not only has society model Frankie Herbert achieved the yoga position, but her ­terrier puppy, Chicken, has perfected it, too.

Frankie, 24, is the niece of the Earl of Carnarvon, whose ancestral home, Highclere Castle in Hampshire, doubles as Downton Abbey in the period drama.

She rescued Chicken from an animal shelter last year and is delighted to have some cosy canine companionship during the lockdown.

‘I’m so grateful for Chicky at this time,’ says Frankie. ‘Having a dog has been one of the best things I’ve ever done.’ 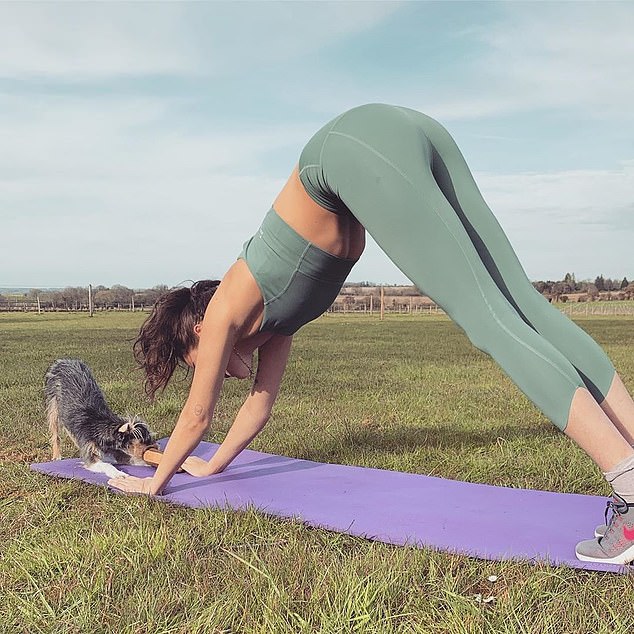 Not only has society model Frankie Herbert achieved the yoga position, but her ­terrier puppy, Chicken, has perfected it, too 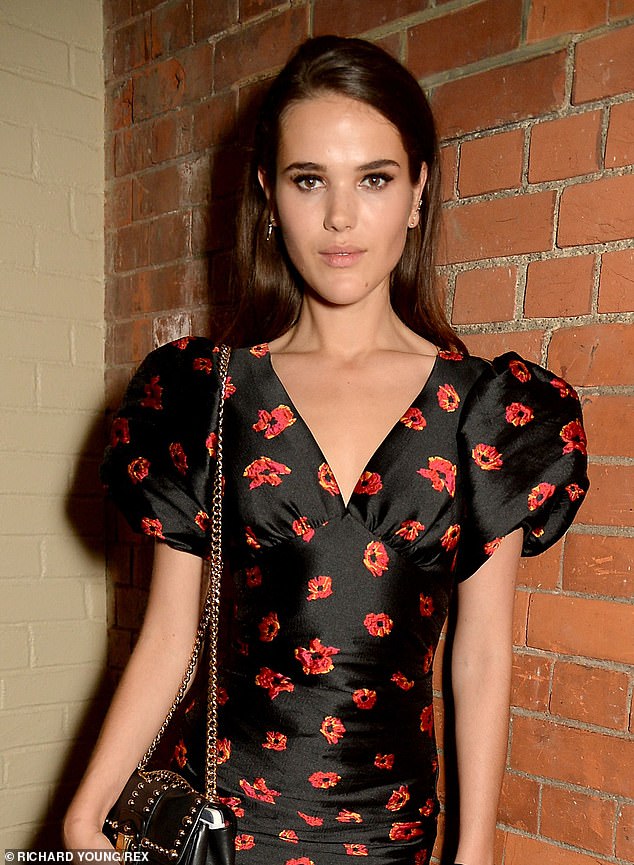 Frankie, 24, is the niece of the Earl of Carnarvon

The Duke and Duchess of Sussex have never publicly expressed their gratitude to Canadian taxpayers for helping shoulder their security costs while living in Vancouver, but Prince Charles may have offered a private thank-you for them.

For I hear the heir to the throne held a telephone meeting on Tuesday with the country’s prime minister, Justin Trudeau, from his Scottish retreat, Birkhall.

Trudeau and his wife, Sophie, are friends with the royal duo.

‘The money’s pretty bad, but I would rather keep my factory open than close it down,’ he tells me. ‘This is all about putting our shoulders to the wheel and doing what we can.’

Grant, who works with Prince Charles on sustainability in fashion, adds: ‘I’m getting messages from home sewers asking: “We are desperate to help. Have you got patterns, and where can we get fabric?”’

Bathtime that adds a touch of Klass

With many of us living our lives online at the moment, there’s always a danger of over-sharing.

Which seems to be the case with Classic FM presenter Myleene Klass, who posted this photograph of her in the bath with her boyfriend, the fashion PR executive Simon Motson.

She gushes: ‘Now we’re in lockdown with our miracle baby, there’s no one I’d rather be staying home with.’ 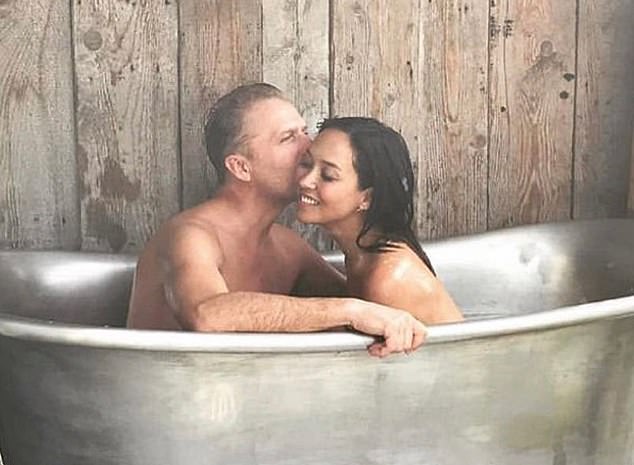 With many of us living our lives online at the moment, there’s always a danger of over-sharing

Television historian David Starkey has opened up about the hardship of self-isolating without his long-term partner, publisher James Brown, who died aged 43.

‘I was deeply in love with James,’ Starkey, 75, tells me from his 18th century manor house in Kent.

‘It’s hard without him. But I’m an only child, so I’m very good at solitude. And the key thing is I have a nice house and a beautiful garden. I’m also a writer, so I’ve got something to do.’

‘We have the most wonderful practice,’ she tells me. ‘It’s fabulous and it’s topped by this gorgeous doctor. He’s just so divine.’

Jilly — who’s using lockdown to work on her latest novel, Tackle, about thrusting Premiership footballers and their WAGs — warns anyone thinking of tracking her new hero down: ‘Everybody’s blood pressure rockets when they go in to see him.’

As they say in the movies, it’s a wrap for Lily

She played the romantically tragic Fantine in the BBC’s Les Miserables, but off screen Lily Collins is enjoying a flourishing love life.

The 31-year-old daughter of musician Phil and his ex-wife, Jill Tavelman, made a special debut this week with her boyfriend, Charlie McDowell.

The Surrey-born actress posted a sweet photo of them together online as she wraps her arms around his waist, describing it as ‘our first picture together, but thankfully not our last’.

Lily started dating director Charlie, 36, last June, shortly after his split from Emilia Clarke, who starred as Daenerys Targarye in Game Of Thrones.

He is the son of A Clockwork Orange star Malcolm McDowell and Oscar winner Mary Steenburgen. 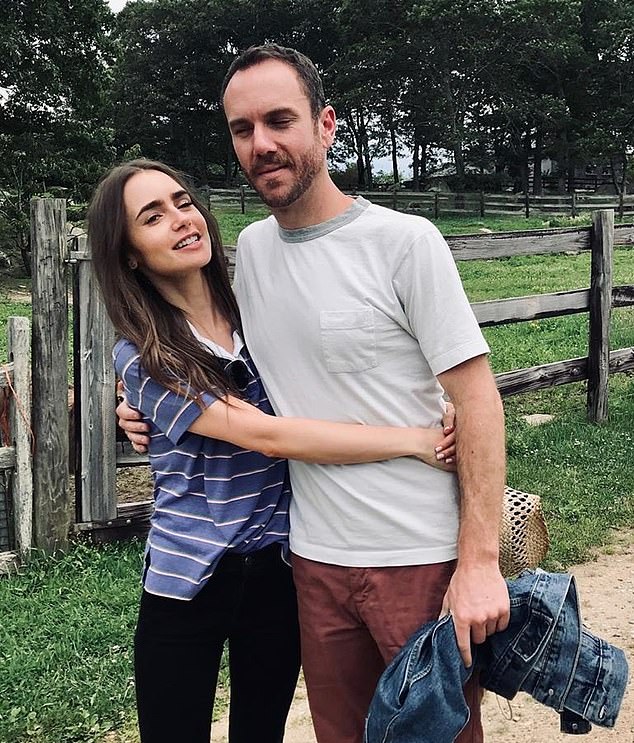 The 31-year-old daughter of musician Phil and his ex-wife, Jill Tavelman, made a special debut this week with her boyfriend, Charlie McDowell

Little Mix’s Leigh-Anne Pinnock gets emotional during The Search

Little Mix’s Leigh-Anne Pinnock gets emotional during The Search