Lord Sugar has revealed the BBC is in talks to air two series of the Apprentice in one year after filming for the latest show was cancelled due to coronavirus.

The Apprentice boss, 73, told MailOnline producers hope they can start shooting for series 16 in September and put the show on at the start of 2021.

Businessman Lord Sugar, who aims to do another four series of the Apprentice before retiring, said: ‘We hope that if things calm down by July we might be able to start filming in September, in which case the show will be on early next year.’

‘It’s not the death of the programme’: Lord Sugar has revealed the BBC is in talks to air two series of the Apprentice in one year after filming for the latest show was cancelled

Speaking exclusively to MailOnline, Lord Sugar continued: ‘But if that’s not possible then it looks like we’re going to skip a whole year.

‘It’s a shame but it’s understandable, there’s nothing we can do. It’s not the death of the programme. The programme will proceed.

‘That’s one of the things we’re considering, to have two series air in one year. It will be a big challenge to do but it’s possible.

‘The production company already has a group of candidates that were ready to be in this next series and those candidates have been told to standby and see what happens. 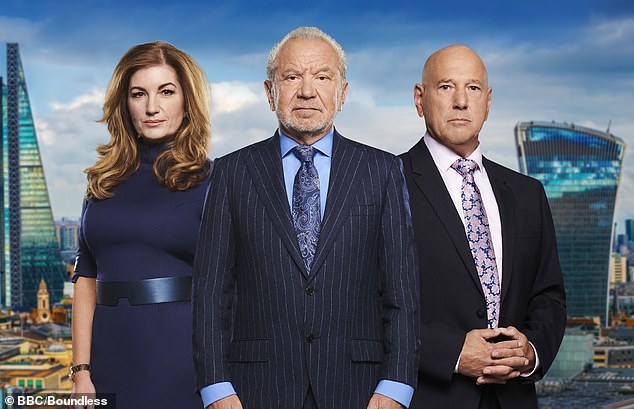 ‘It is quite obvious when you think about it, the filming normally starts in the spring, late spring and of course we don’t see that the crisis will be over anywhere near that.

‘Part of the Apprentice process is travelling abroad, to go into factories and kitchens and make things and get the assistance of third party companies to allow us in their premises so obviously that’s not possible – and until that is possible, we can’t film the show.’

Lord Sugar has vowed to front the Apprentice for another four years but says the fate of the show is in the hands of BBC One bosses.

He added: ’20 series is a nice round figure but listen it doesn’t depend on me, it depends on the BBC. 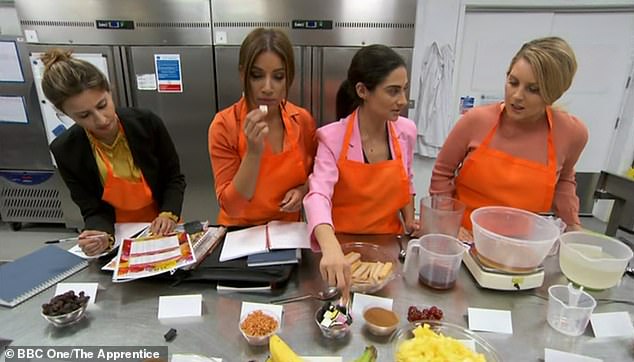 ‘We can’t film the show’: Lord Sugar explained the Apprentice process involves candidates travelling abroad and going into factories, which isn’t possible amid the coronavirus outbreak

‘We were about to start filming the 16th series so they will need to agree to do another four more.

‘It’s not me that makes the decision, it’s them but if they wanted to do another four series, I’d be up for it.’

The billionaire has confirmed he’s not furloughed any of his staff and he’s confident none of his companies will face bankruptcy as a result of the coronavirus outbreak.

But he admits it’s still a fearful time for business owners including his partner and 2013 Apprentice winner Dr. Leah Totton, 32, who’s been forced to close her cosmetic skin clinics due to the lockdown. 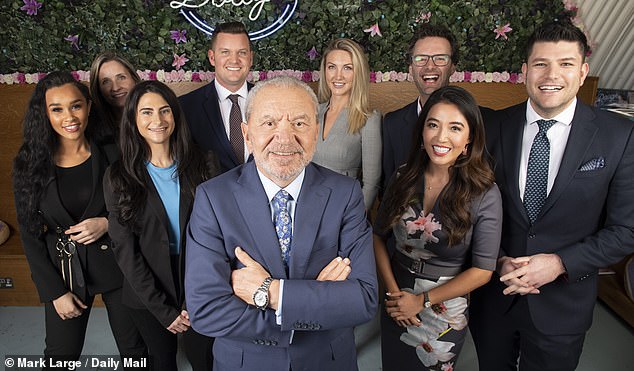 Apprentice winners: The billionaire has confirmed to MailOnline that he hasn’t furloughed any of his staff but his businesses have shut down, which he admits is ‘not a good position to be in’ 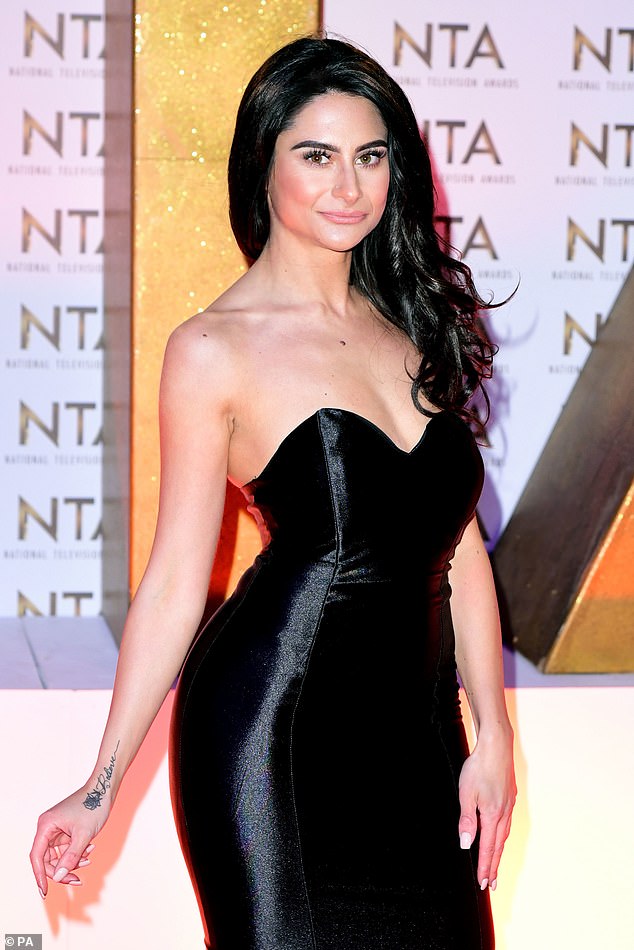 He said: ‘It’s not a good position to be in but fortunately we’re companies that have good financial resources, so our main company, we haven’t put anybody on furlough. They’re all being paid they can all operate perfectly at home.

‘But some of the bigger companies I own have completely closed.

‘Dr. Leah for example, the cosmetic clinics she has have all been shut for over a month and recruitment companies are trying to do their best.

‘Tropic Skincare is working with a skeleton staff but basically we have shut down, that’s it. 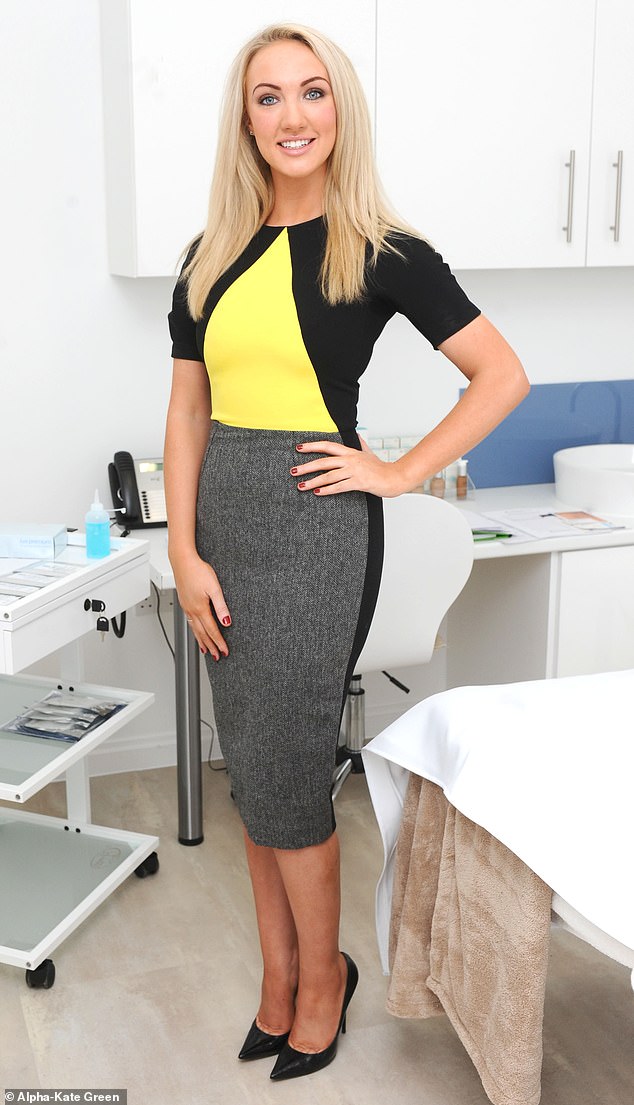 Tough: Lord Sugar says his partner Dr. Leah Totton, who won the Apprentice in 2013, is suffering after being forced to close her cosmetic skin clinics for the foreseeable future

‘There are certainly companies that I have that it doesn’t matter if we’re shut or not like real estate companies but again the problem with that is construction has been stopped so yeah we’re shut down.

‘But that’s all we can do, we’re all in the same boat unfortunately.

‘We have a lot of financial backing and that’s it, none of my companies will be going into bankruptcy, that’s for sure.

‘But that’s not to say it isn’t going to happen to other people, a lot of our competitors will fall away.’ 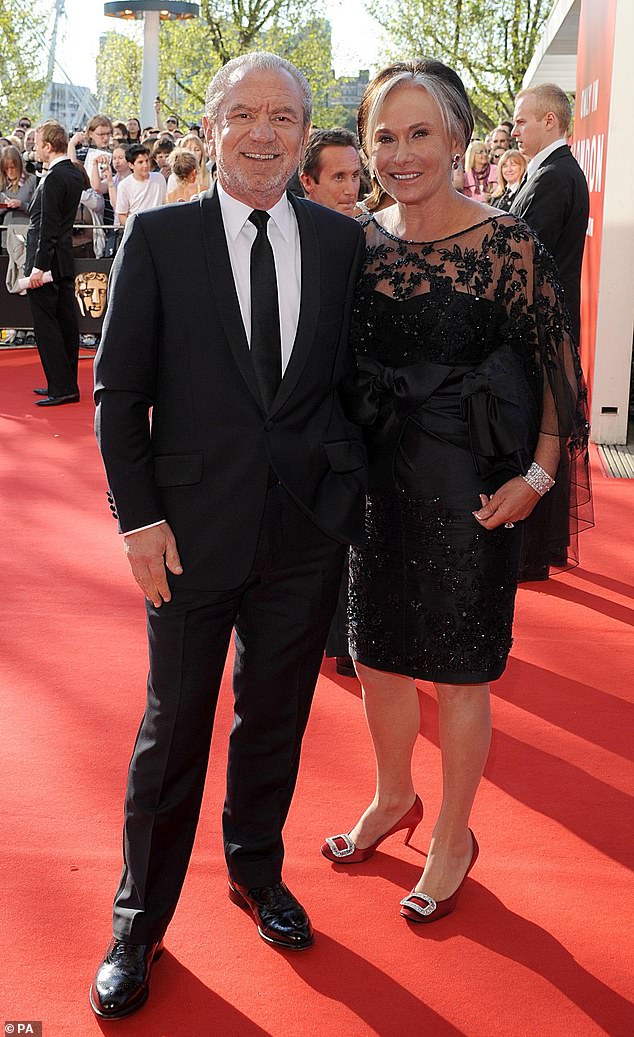 Making the most of it: The businessman is in Florida isolating with his Ann where he’s adopted a new life away from the boardroom going for walks and reading by the pool (taken in 2009)

The 73-year-old is in Florida isolating with his wife Ann where he’s adopted a new life away from the boardroom – going for walks, cycling along the coast, reading by the pool and watching box sets.

And he isn’t missing his Essex mansion where he lives in the UK after describing the prospect of flying home as going from the ‘frying pan into the fire.’

‘To be frank, there was no point in me coming home,’ he said.

‘I would have been coming out of the frying pan into the fire really. 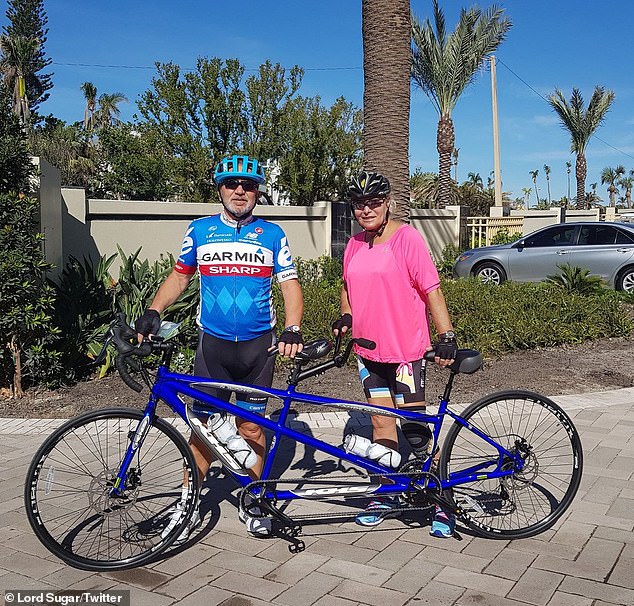 Keeping fit: Lord Sugar says he’s going on 40-mile bike rides up the coast and has been watching hours of box sets while in lockdown

‘The weather is better here and we’re able to go out walking, there’s no shortage of food, people wear masks to go into the supermarkets and no restaurants are open but all the restaurants are doing takeaways and will deliver it for you.

‘I do 40-mile rides up the coast twice a week so we can do that and drive around in our cars.

‘We’ve sat and watched box sets or whatever you want to call them, we’ve got through quite a few different TV shows.

‘I’ve been doing a lot of reading also. Fortunately we have a pool area, the pool is closed but the area surrounding is open.

‘I sit round there and read my books. I’ve been reading the life stories of Piers Morgan. 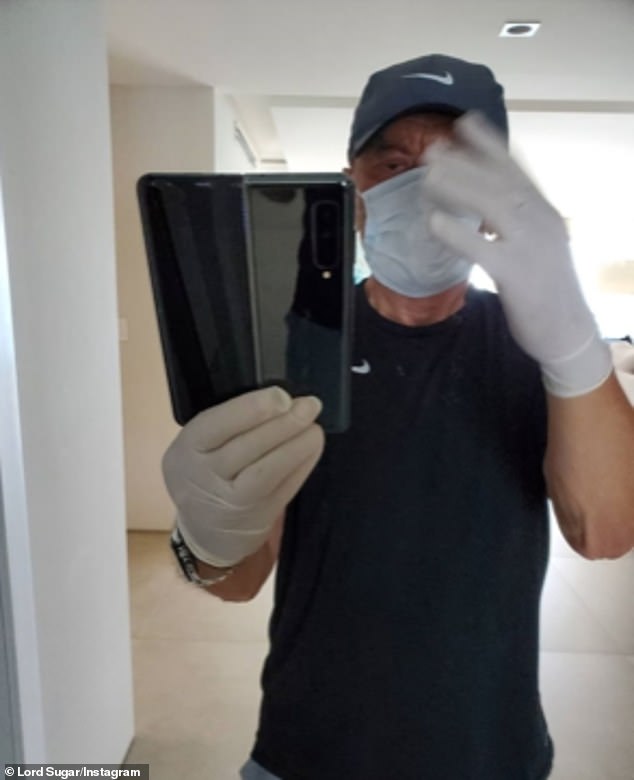 Strong: Despite being considered by the government as ‘vulnerable’ to the virus, Lord Sugar says he refuses to ‘lock myself away like a hermit’ and he sees himself as a fit 73-year-old

‘I’ve got FaceTime, Zoom, WhatsApp, that’s a blessing in disguise that this terrible virus and crisis has come about in an era where technology has given people the chance to see and talk to each other so I suppose that’s one positive thing we have available to us.’

Despite being considered by the government as ‘vulnerable’ due to being over 70, the TV star says he isn’t at all threatened by the deadly virus and refuses to lock himself away.

He said: ‘I’m 73 and I fit in that category but I consider myself a very healthy and fit person but we’re not living under martial law.

‘I am a sensible person and I will do what’s good for my wife and me. I’m not going to lock myself away like a hermit.’

Watchdog orders insurers to ensure customers get value for money

The lockdown lust files: Meet the women who moved in with their brand news lovers for quarantine

Watchdog orders insurers to ensure customers get value for money

‘Don’t work’: The mild symptoms to watch out for which means...