A man who lost his partner to secondary breast cancer told how he is ‘glad’ she died before the coronavirus pandemic.

Gary Powell, 54, from Bradford, revealed he is experiencing the complexities of grieving in isolation after his partner Tina Hudson, aged 54, died in Bradford hospice on 12 February following a long battle with the disease.

Tina’s funeral was held on the day Boris Johnson announced the lockdown, and while Gary admits every little thing hits harder in isolation, he has found a new routine and support network on social media to help him cope.

Speaking exclusively to FEMAIL, he said: ‘In a way, I’m glad Tina died before the pandemic hit. I couldn’t imagine not being allowed to visit her when she was in the hospice. It must be horrific for the family members and the patients. If they do pass away when you’re not there – it’s got to be so hard on people.’

‘If I could sum up life during lockdown in one word, it would be strange,’ he said. ‘Everywhere is so quiet. The struggle is finding things to do to keep your mind occupied.’

‘I drive my son to work most days to save him going on public transport and that gives me some routine, but when I get back home the emptiness definitely hits me.

‘My brother used to visit every Saturday, but now even he can’t come over. It’s the isolation that makes grieving during a lockdown harder.’

Gary Powell, 54, from Bradford, has spoken of the complexities of grieving in isolation after his partner Tina Hudson (pictured together) died in Bradford hospice in February, aged 54. Pictured, Tina and Gary in the hospice 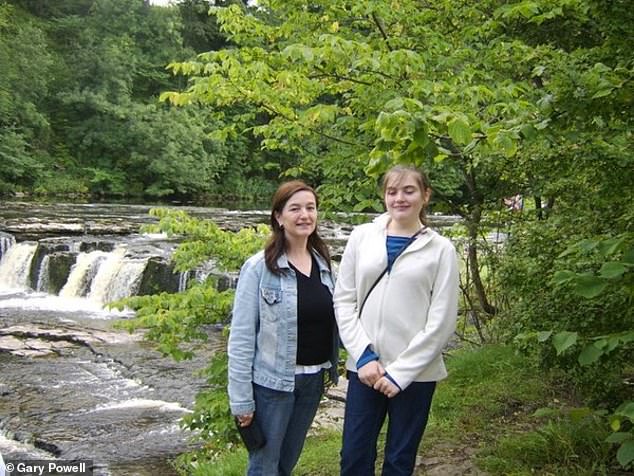 Gary went on to say he is ‘glad’ his partner passed away before the coronavirus pandemic, as he can’t imagine not being able to see her in the hospice. Pictured, Tina (left) and daughter Shannon (right)

He continued: ‘It’s hard any way, but I just can’t imagine what they must be going through because they can’t see their loved ones.’

Tina and Gary had been chatting online for months, before finally deciding to meet for the first time halfway between their houses at a service station on 27 August, 2009.

They immediately hit it off and spent four hours chatting in Gary’s car – and Tina,  who leaves behind eldest Laura, 35, Darryl, 32, Zoe, 29 and Shannon, 23 – moved in with him a year later.

However, in November 2011, Tina was re-diagnosed with secondary breast cancer, which had spread to her lungs, liver and bones.

‘Tina had already had breast cancer but was given the five-year all clear in 2005,’ explained Gary. ‘Then, in 2011, she developed this persistent cough that wouldn’t go away. She went to the doctor, who re-diagnosed her.’

‘This time, we knew it was incurable, but we never asked how long she had left,’ explained Gary. ‘We didn’t need to know, we just wanted to fight it.’

Over eight years, Tina endured 126 gruelling cancer treatments – and even managed to see her daughter graduate. 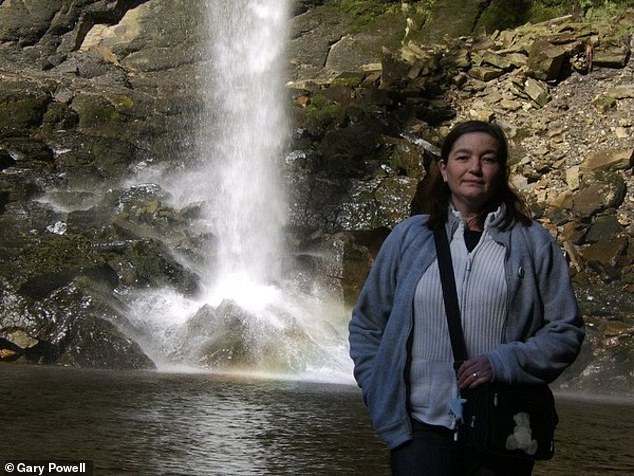 Gary posts weekly updates on Tina’s Twitter account, which provides comfort to her friends and family. Pictured, his last Tweet was a photo of Tina at a waterfall the couple visited in the Yorkshire Dales 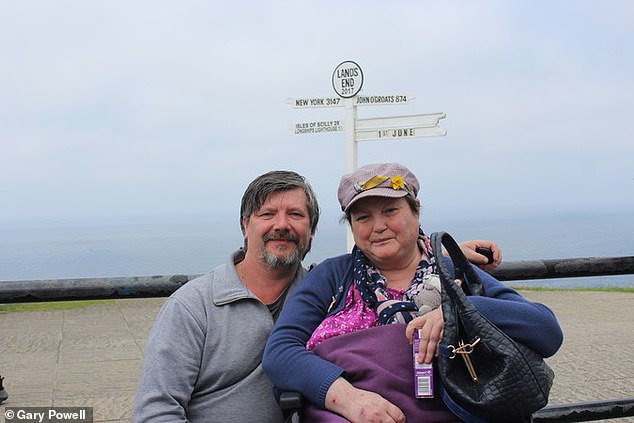 Gary says being in lockdown is the perfect opportunity to make someone overthink. Pictured, with Tina, before her condition deteriorated

But Tina didn’t want to go for her treatment in February, which was very unlike her – leading Gary to believe she didn’t want to risk catching coronavirus, because she knew she would not survive it.

Sadly, Tina died at home on 12 February after being cared for at the Marie Curie hospice in Bradford.

‘Life in the last few weeks of Tina’s life was hard,’ explained Gary. ‘Her mobility had gone so we couldn’t get out as much. The last time we physically went out anywhere was to see her dad on 27 December 2019.

Most breast cancers are discovered at an early stage. But a small proportion of women discover they have breast cancer after it’s spread to other parts of the body (metastasis).

If this is the case, the type of treatment you have may be different. Secondary cancer, also called ‘advanced’ or ‘metastatic’ cancer, is not curable.

Treatment aims to achieve remission, where the cancer shrinks or disappears, and you feel normal and able to enjoy life to the full.

He continued: ‘We spent all our time in the house at the start of this year, apart from leaving for treatment or food or medicine. We had carers coming in.’

Garry recalls on a Thursday between 10am to 2pm, he would go out and do a bit of shopping and some truck spotting, which the pair of them enjoyed doing more than anything.

‘I’d come back via Morrison’s to buy a present for Tina,’ he said. ‘Just silly little things, like her favourite Bournville chocolate, or things she’d never tried before.

‘Tina had a sitter during this time, and they’d do colouring together. When I used to get home, I’d put the shopping away and show her what I’d bought.

‘At the end you could see that it was getting to her. She wasn’t her usual bubbly self. She used to say she felt like a burden on me, because I had to do more for her and she didn’t like that.

‘It was like her legs were capable, but her brain couldn’t tell them what to do. That’s what hit her the most towards the end.

The father-of-one says Tina passed away at home, peacefully in her sleep, which is what she wanted. 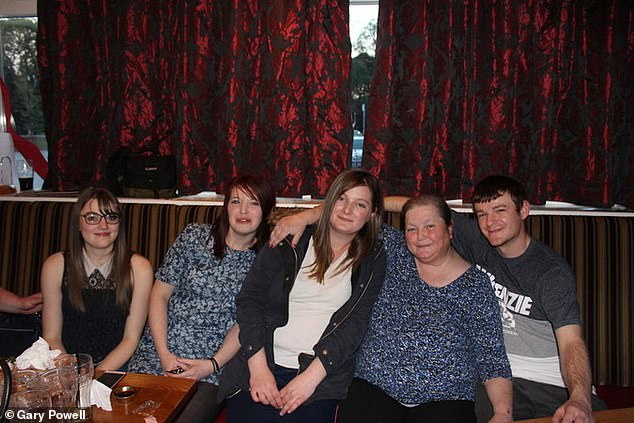 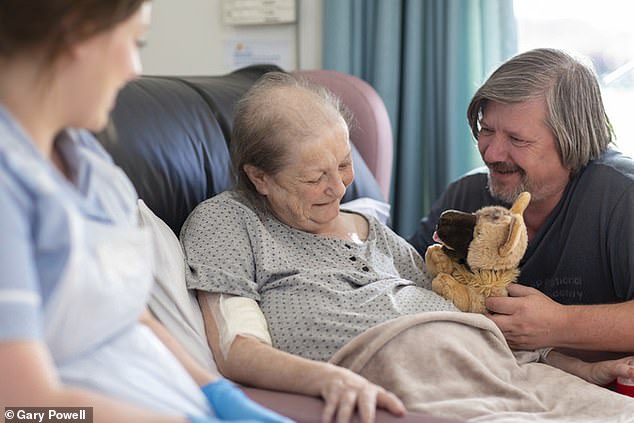 Gary says that at the end, he could see it was getting to Tina, who used to say she felt like a burden on him. Pictured, together in the hospice

‘I looked up from my sofa, which was at the bottom of her bed, and I looked over the footboard and it looked like she wasn’t breathing, so I jumped up and shouted upstairs to my son, Nathan, who lives with me,’ recalled Gary.

‘He came shooting down because he knew something was wrong. I got straight on the phone to 999, and put my hand on her shoulder. I could feel that she wasn’t breathing.

‘It was like she knew I was there because she took her last breath. “She’s breathing again,” I said. I was confused because I felt her shoulder rise. But that was it. After that, there was nothing else.’

‘My son said from me shouting him down to the ambulance crew arriving was about 5 minutes. Then a second crew turned up, and they told us there’s nothing they could do. She’d passed away. I was distraught. I was crying.’

The undertakers arrived by 4pm, and then the house just seemed so empty after that.’

Gary then had to make several heartbreaking phone calls to Tina’s children and family.

‘That was one of the hardest things I’ve ever done,’ he explained. ‘I remember how her younger sister reacted – she screamed, like a howl. It just sticks in my head.’ 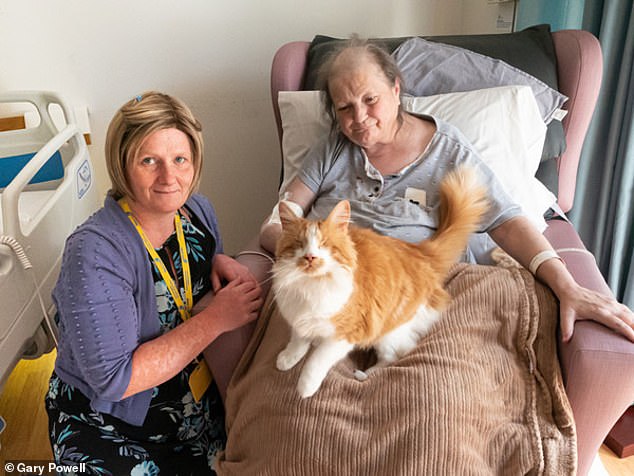 Tina passed away at home, peacefully in her sleep, which is what she wanted. Pictured, Tina with volunteer Katie Lloyd in the hospice 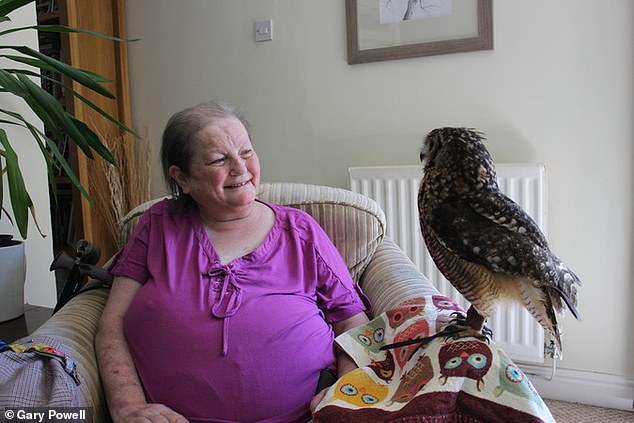 As her condition deteriorated, Gary says: ‘It was like her legs were capable, but her brain couldn’t tell them what to do. That’s what hit her the most towards the end.’ Pictured, Tina, at home

Tina’s funeral was on Monday 16 March – the day that Boris Johnson first announced social distancing as a voluntary measure.

‘It was held a week before they cancelled funerals, so we weren’t impacted,’ explained Gary. ‘I’m glad for that. To think, nobody from her life could have been there to see her service – it’s just unimaginable.’

Now, Gary is struggling to cope with grieving in isolation, as it is the perfect environment for overthinking.

Although he lives with his son Nathan, 20, he is a key worker, meaning Gary is alone with his thoughts all day.

‘Being on your own all day, trapped in the house, every little thing hits harder,’ he explained. ‘You find silly, little things start to get to you.’

‘For example, I was doing the washing up the other day and one of Tina’s favourite songs came on the TV. It was from the film The Greatest Showman. We used to sing along to it.’ 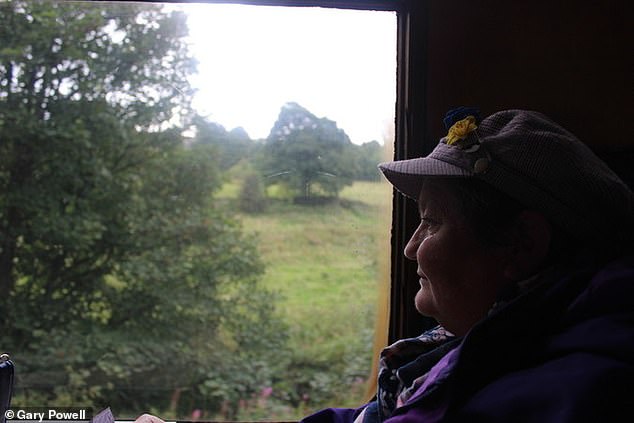 ‘Out of nowhere this sadness just overwhelmed me. I had to sit down and cry. It was so powerful.’

He added: ‘The films I like, the music I listen to – I always used to enjoy them with Tina. Listening to my Spotify playlist, every song holds so much significance right now. But I try to focus on the happy memories those things bring me as well as accepting the sadness.

However, Gary has found great comfort in social media, and posts weekly updates on Tina’s Twitter account, which also helps her friends and family.

‘My last tweet was a photo of Tina at a waterfall we visited in the Yorkshire Dales,’ he said. ‘She was a huge Kevin Costner fan, and it’s the waterfall that appears in the Robin Hood Prince of Thieves film. She was so excited.’

‘I remember seeing her stood at the side of the waterfall, she said: ‘I’m stood where Kevin Costner was stood!’

‘The first thing I want to do when lockdown is over is go back to those waterfalls. Because it was such a special place for Tina and me. It was such a treasured memory. Something she never thought she’d be able to do, and we did it together.’

If you, or someone close to you, is approaching the end of life, Marie Curie are here to help. Call free 0800 090 2309*, seven days a week/ Monday to Friday 8am to 6pm, Saturday and Sunday 11am to 5pm or visit mariecurie.org.uk/support.

What became of girls who frolicked with Bullingdon boys? Oxford’s brightest young women rose to top

Bezos tells shareholders that Amazon is preparing to test all employees

British man, 40, dies after plunging 8ft down open manhole in the Costa del...

Trump asserts ‘dumb’ Nancy Pelosi will be ‘overthrown’ as he blasts...