The grieving mother of a 17-year-old hacked to death with machetes has hit out at one of his five killers for taunting her about the murder by posting photos of himself enjoying prison life on Instagram.

Defenceless Kyle Yule was fatally stabbed in October 2017 near his home in Gillingham, Kent when five thugs hunted him to his friend’s front door before savagely attacking him with knives and machetes in a row over a bike.

Kyle begged them to stop and desperately called for help – but no one came to his aid – with horrified witnesses later saying they heard him screaming for his mother.

The teenager died hours later after suffering a severed artery and the gang were all jailed for a total of 88 years in June 2018, charged with murder and violent affray.

Ring leader Victor Maibvisira, then 19, was caged for a minimum of 24 years but Kyle’s devastated mother Nikki says that the thug still torments her.

He spent the 2018 trial laughing about killing her son and has now set up an Instagram account from prison.

Ring leader Victor Maibvisira, then 19, was caged for a minimum of 24 years for Kyle Yule’s murder but the 17-year-old’s devastated mother Nikki says that the thug still torments her through an Instagram account set up from prison 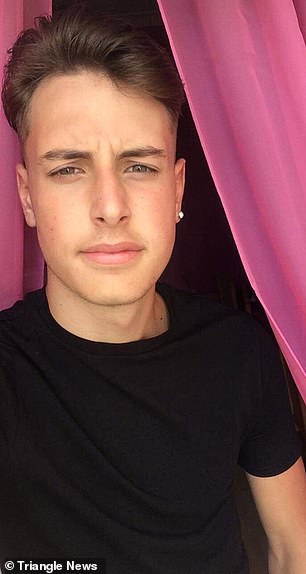 Kyle Yule, with mother Nikki, was fatally stabbed in October 2017 near his home in Gillingham, Kent in a row over a bike

The murderer’s name on his account – which is not being disclosed – indicates he has killed someone and is proud of it.

Maibvisira has posted on the social media app from his jail cell boasting about the murder.

Nikki says she also often gets sent photos her son’s killer of him relaxing and enjoying himself in prison.

The mother-of-four said: ‘He’s behind bars but he’s proud of himself for what he’s done. My Kyle is never going to take another breath.

‘He’s never going to live another birthday and have another Christmas.

‘But it’s alright for that man to murder my son, and then go on Instagram taking pictures. 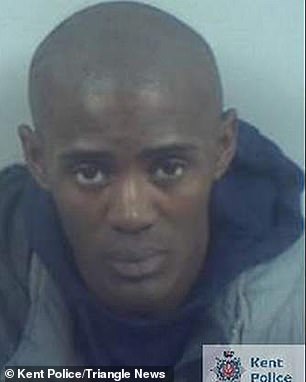 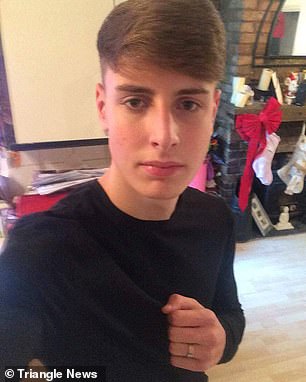 ‘I can’t look at his face, it disgusts me. How can my son be dead, and he’s sitting in prison living the highlife?’

‘Victor kept laughing, thinking it was a joke all the time,’ Nikki says.

‘None of his killers showed any remorse at all. The court said they were like vultures.

‘Kyle was screaming – begging them to stop and saying he wanted to see his mum.

‘They thought that was a joke. Now I’m absolutely petrified of something happening to my other kids.’

Nikki still lives in the house where she raised Kyle, in Gillingham, Kent with son Vinnie, 11, daughter Aaliyah, eight, and a teenage son who is so terrified he doesn’t want to be named. 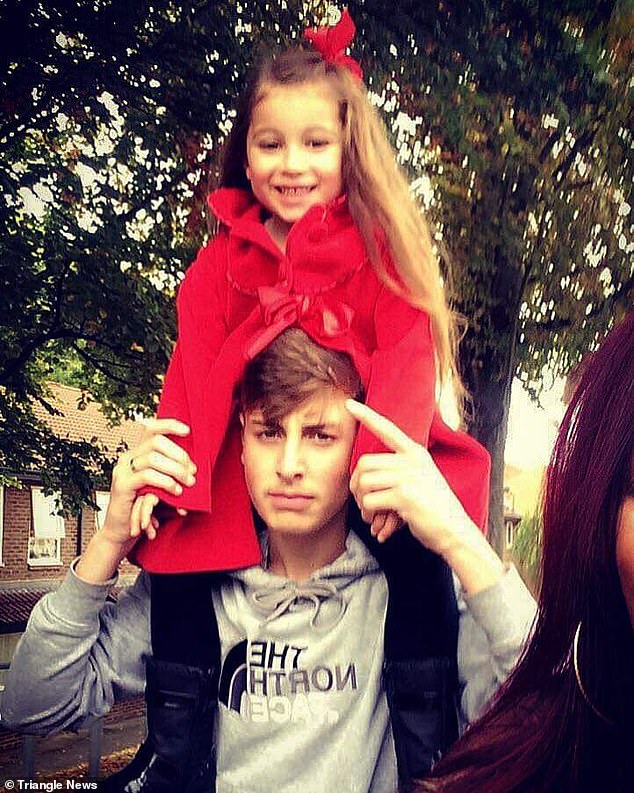 Nikki still lives in the house that Kyle was raised in, with son Vinnie, 11, daughter Aaliyah, eight (pictured with Kyle), and a teenage son who is so terrified he doesn’t want to be named 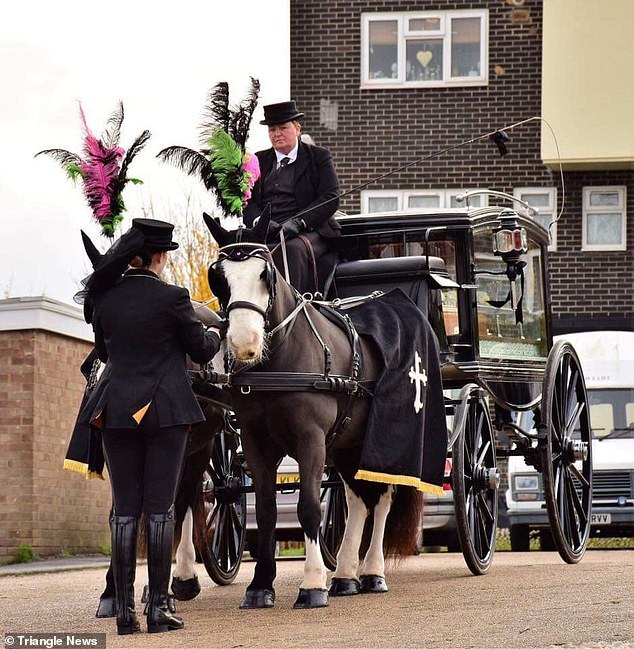 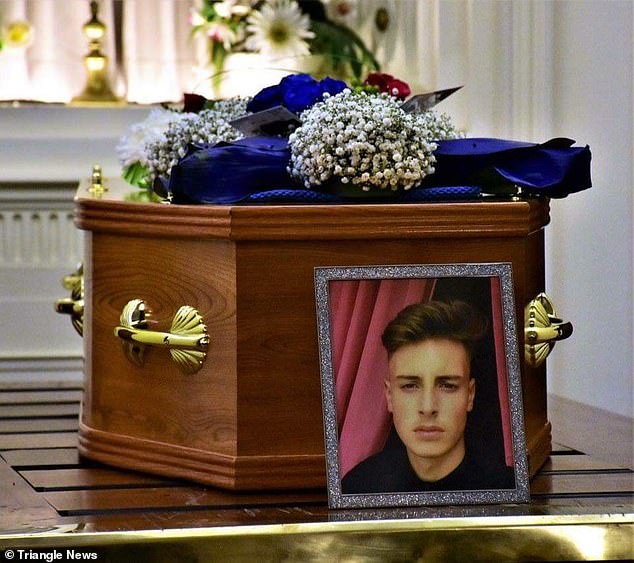 Shezakia Daley, then 18, Tyler Ralph and Ephrain Akinwunmi-Streets, both 17, and 16-year-old Jordan Dania were all jailed for at least 16 years

‘He’d take her to the park and they’d lie in her bed and watch movies.’

As well as looking after Aaliyah, Kyle would help Nikki – doing the shopping and dropping off his siblings at school.

‘On Mother’s Day he would always be the first one up, he’d run upstairs and bring me breakfast in bed,’ she say.

On the night he was killed in October 2017, Nikki made Kyle his favourite dinner – spaghetti bolognese.

She remembers him saying ‘love you Mumsy’ before leaving the house.

About 45 minutes later, Nikki heard banging at the door. 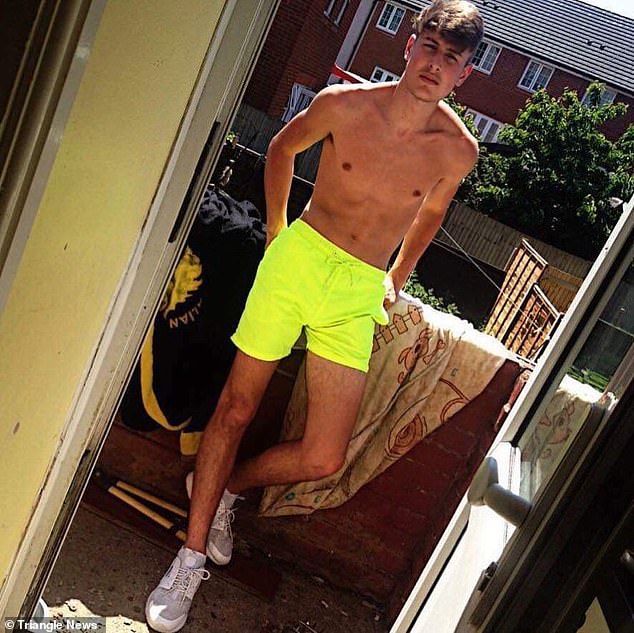 ‘My heart just dropped to the floor, I felt sick,’ Nikki says.

She ran to where they said he was – just five minutes away from her house – and saw police cars and ambulances at the scene.

Nikki broke down in tears as she recalled that the emergency services wouldn’t let her see her beloved son who was fighting for his life.

‘They wouldn’t even let me go up there to see him,’ Nikki says.

‘That was really hard. They said I’d be traumatised if I ever saw him like that.

‘You just want that last cuddle. I just needed that cuddle, but they said I would have been traumatised.

‘I think I should have been given the opportunity to say goodbye to my son.’ ‘I don’t think it even clicked into my head that he was dying,’ she sai.

Then came the news no mother wants to hear – doctors told Nikki they couldn’t keep her son alive.

‘I told them they could have my heart and my blood, and give it to my son,’ Nikki sobbed.

‘I kept saying: He can have my heart, he’s got a life to live. He can take all my blood.

‘But they said it was too late.’

Nikki went to the morgue to say goodbye to her son.

‘I cuddled him – he was ice cold and blue and gray,’ she remembers.

‘It was the worst feeling in the world. My heart broke that day.’

Shezakia Daley, then 18, Tyler Ralph and Ephrain Akinwunmi-Streets, both 17, and 16-year-old Jordan Dania were all jailed for at least 16 years for Kyle’s murder after a trial at Maidstone Crown Court in June 2018.

Ringleader Maibvisira was jailed for a minimum of 24 years for murder and affray.

It is thought Maibvisira was angry about people who stole his bike so ‘tooled up’ and ‘gathered his troops’.

Nikki maintains Kyle had nothing to do with this.

Despite the sentences Nikki cannot move on from her son’s horrific death.

‘I’ve told the police that Victor has a phone in prison, otherwise how else can he post on Instagram but they don’t seem to want to do anything about it,’ Nikki raged.

‘They’re meant to be getting punished in there, not boasting on social media.

‘I’ve been getting calls from withheld numbers at 4am and 5am constantly.

‘I don’t know who they are from, but they leave me petrified.’

A Prison Service spokesman said: ‘Prisoners found with a mobile phone are punished, and we are spending £100m on x-ray scanners and better security to stop them being smuggled into prisons.’

Drama The Murder Of Stephen Lawrence to get three-part sequel

Jared Leto flashes his muscular chest in a half-open shirt as...

Paedophile child killer tells police a girl he snatched from her...