A ‘disgusting’ drunk who urinated on a war memorial in Manchester was branded a ‘social menace’ as he was jailed for two and a half years.

Mark Smith, 58, was spotted on CCTV by council staff urinating on the cenotaph in St Peter’s Square, Manchester, on January 16 last year.

Members of the public went over to challenge him, but he was aggressive towards them. He was also abusive to police who attended the scene, calling them ‘fat pigs’.

The next morning, after spending the night in the cells, Smith spat on a female detention officer.

Now Smith, formerly of Rochdale, has been jailed for two-and-a-half years for a drink and drug fuelled crime spree.

Judge John Potter told Smith: ‘This was disgusting and deeply disrespectful behaviour likely to cause offence to the public, not just because your genitals were exposed with a view to urinating, but that you decided to do this on a monument which commemorates the tragedy of loss of life in warfare.’

Mark Smith, 58, has been described as a ‘social menace’ as he was given a two-and-a-half year jail sentence having been seen on CCTV urinating on the cenotaph memorial in Manchester

Minshull Street Crown Court heard that the incident at the cenotaph occurred at about 10.45pm, on Wednesday, January 16 last year.

On September 27 last year, workers had attended his flat to conduct repair work to a leak in Smith’s flat in Rochdale, which was affecting flats below. He refused to let them in at around 6.30pm, and threw missiles from his 15th floor flat.

Police were engaged in a standoff with Smith for hours, and had to call the force’s tactical aid unit for assistance.

At about 11pm, they forced his door open. Smith had barricaded himself behind a sofa, and was throwing furniture at the officers. One officer said Smith had spat at them four times. 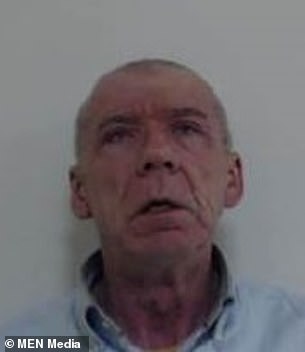 Smith, formerly of Rochdale, was described by defence as a ‘Jekyll and Hyde character’

He was removed from the flat, and was racially abusive to another officer after being taken to Bury police station, calling him a ‘Pa** ba*****’ and an ‘Asian toe rag’.

Smith appeared before Minshull Street Crown Court previously in July last year for other offences. He received an 18-month community order and an alcohol treatment program.

They included assaulting a nightclub doorman, being abusive to police officers, spitting in the face of a police officer and being in possession of a knife and an axe. Judge Potter described Smith as ‘nothing more than a social menace’.

Defending, Michael Goldwater said that Smith had stayed out of trouble between 2001 and 2018 and had ‘lived peacefully’.

He had a drink problem earlier in his life, but was told that cannabis would help in treating symptoms of epilepsy which he encountered.

But Mr Goldwater said the use of cannabis then turned him back to drink. He said Smith’s crime spree in 2018 and 2019 represented a ‘catastrophic failure’ on the defendant’s part to manage his drink and drug problem. Mr Goldwater described Smith as a ‘Jekyll and Hyde character’.

He said when drinking Smith is ‘ungovernable’, but when he is sober he is ‘polite, intelligent, charming and amusing’.

Smith is now ‘determined not to relapse’ in future, Mr Goldwater said.

Judge Potter told Smith: ‘Your difficulties will not be ended unless and until you decide to take personal responsibility for them.’

Interactive map allows you to compare the size of your garden

Iranians are told to ‘prepare for the worst’ as country faces second wave of...

Is this £10.7m mansion in St George’s Hill the perfect pandemic...