This is the eagerly awaited musical version of the great Scottish film- maker Bill Forsyth’s adored 1983 movie. One of the most gorgeous and revisitable of British films, it’s a comedy of loss that teeters on the edge of heartbreak.

Playwright David Greig and Forsyth share the writing credit, though an unhappy Forsyth has professed his exclusion from this project directed by John Crowley (a Royal Lyceum co-production with The Old Vic in London).

Mark Knopfler – who composed the film soundtrack with its haunting theme tune Going Home – has supplied the songs. 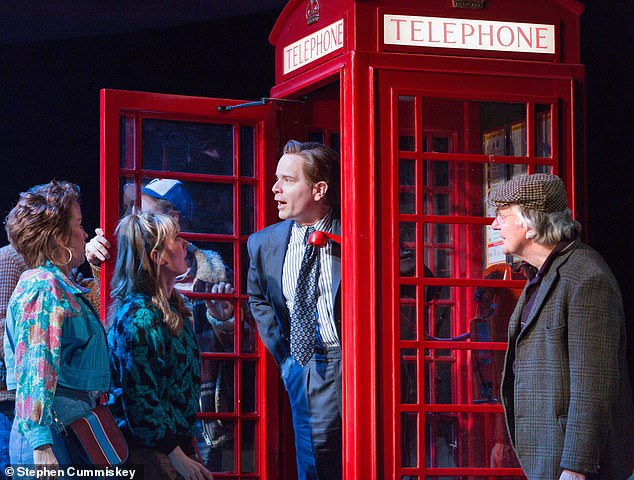 Damian Humbley disarmingly plays the American oil exec Mac, pictured here in the film’s iconic red phone box, who finds himself seduced by the sea and the malt of Ferness

I suspect Houston We Have A Problem and Rocks And Water will become essential additions to any Knopfler playlist. But there are too many songs (19), and collectively they hold up the story.

It’s still the tale of the fictional West Highland harbour of Ferness, whose residents are offered zillions by a Texan oil company in return for building a refinery that would destroy it.

Cue a gentle satire with canny locals overcome by cash lust and dreams of fast cars. But the script is oddly denuded of some of the funniest writing in Forsyth’s screenplay. 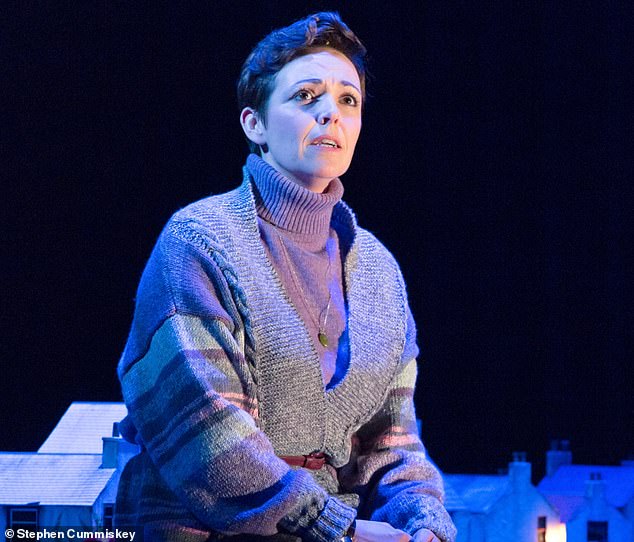 I waited in vain for the line: ‘I’d like to see you get four or five winter rams and a box of mackerel into a Maserati.’

In the movie they’re always going upstairs for a quickie. Now there’s a wedge between them, and Stella (Katrina Bryan) becomes the story’s new, more anti-carbon moral conscience. 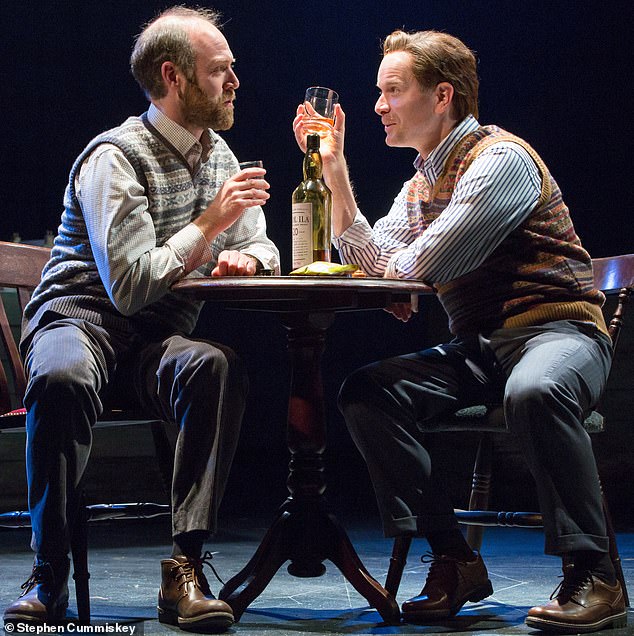 In a good cast Simon Rouse (aka DCI Meadows from The Bill) plays the stargazing oil billionaire Mr Happer (originally Burt Lancaster), Julian Forsyth is the unbuyable beachcomber Ben, and Damian Humbley disarmingly plays the American oil exec Mac, who finds himself seduced by the sea and the malt.

But this is a less emotional business than Forsyth’s beguiling original. Enjoyable, for sure, and with lovely night skies. But besotted film fans like me will have reservations – unlike Ferness’s lonely hotel.

Freddie Fox stars in this fictionalised account of the author Edmond Rostand, a one- hit wonder who wrote Cyrano De Bergerac, the play about the guy with the gigantic schnozzle. 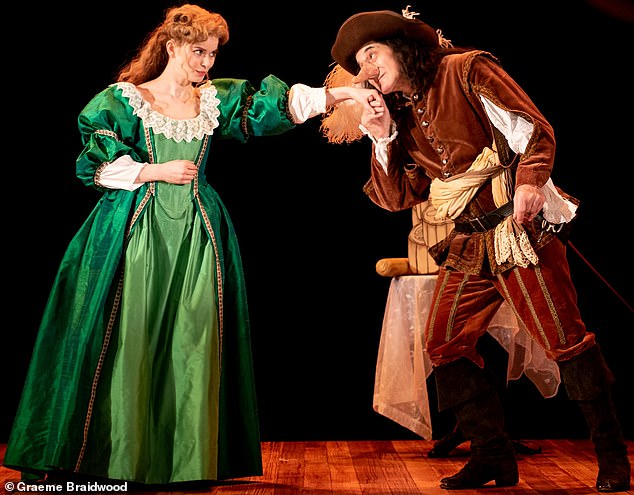 The action is set in naughty 1890s can-canning Paris, with a cast that includes Henry Goodman on hammy form as the actor Coquelin, pictured here with Gina Bramhill as Jeanne

When he ghost-writes love letters for his handsome but tongue-tied actor friend, a plot for a new play slowly starts to hatch. The action is set in naughty 1890s can-canning Paris, with a cast that includes Henry Goodman on hammy form as the actor Coquelin, ditto Josie Lawrence as the great Sarah Bernhardt.

The protean David Langham plays, among others, Ravel, Chekhov (in a brothel) and the farceur Feydeau, whose work the comedy’s structure semi-imitates. 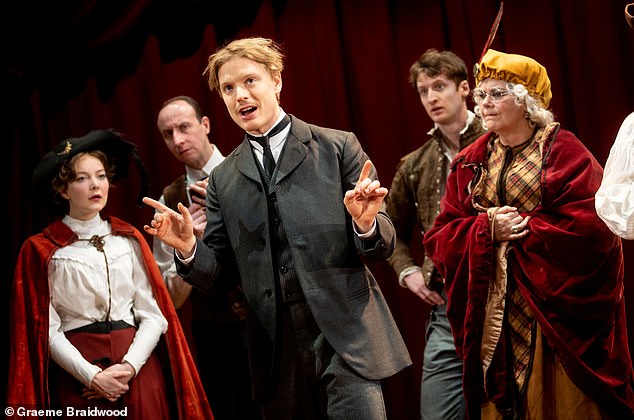 Freddie Fox gives us likeable scribe in Edmond, whose social gawkiness hides a reservoir of inner romance but Edmond De Bergerac is overlong and not quite funny enough

Delroy Atkinson is the charming bar-owner whose ripostes to a racist customer are the inspiration for Cyrano’s rapier wit.

Freddie Fox gives us a likeable scribe in Edmond, whose social gawkiness hides a reservoir of inner romance.

As entertainment, it’s got panache, but it’s overlong and not quite funny enough.

The Taming Of The Shrew

This play condones wife abuse. We can’t have that. So while it looks Elizabethan, the world of the 1590s is now a matriarchy. Amanda Harris plays Baptista, whose eldest son (still called Katherine) is tamed by Petruchia (sic) – a swaggering Claire Price in a ginger fright wig.

Joseph Arkley’s Kate is sour but, frankly, too wimpy for a shrew.

They’ve cut the framing device in which the play is all the dream of Sly the tinker. That would have allowed this women-on-top concept to be more plausibly presented as a comic male nightmare. 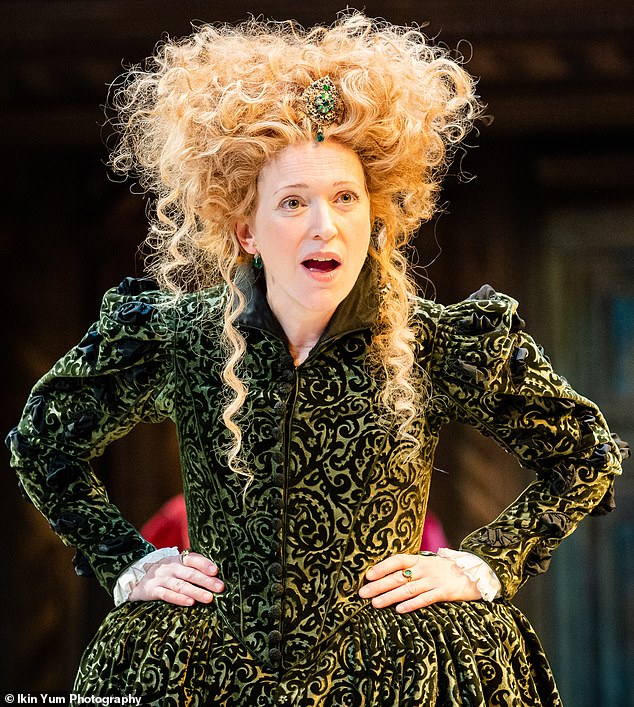 Director Justin Audibert has watered down the brutal comic ding-dong of Kate’s wooing – the one thing audiences love about this swaggering battle of the sexes.

It has its funny moments. But this struck me as basically a slap on Shakespeare’s wrist for not keeping up with our gender politics and ‘woke’ feminism.

How does a mum whose son survived comfort a friend whose child died?

WHO chief insists ‘nothing is hidden from US’ on Covid-19

Khloe and Kim Kardashian are branded TWISTED and HORRIBLE for ‘dragging’ Kourtney to ex...

How Alan Titchmarsh felt ‘teary’ after garden centre owner gives away £500,000 worth of...

How does a mum whose son survived comfort a friend whose...