Spain has recorded its biggest daily leap in coronavirus cases for nearly three weeks as another 6,740 people were added to the tally today.

The jump is partly explained by the growing use of antibody tests, which have added nearly 17,000 people to the total since they were introduced.

This graph shows the daily number of new coronavirus cases in Spain, which leaped to 6,740 today – the highest figure since April 4 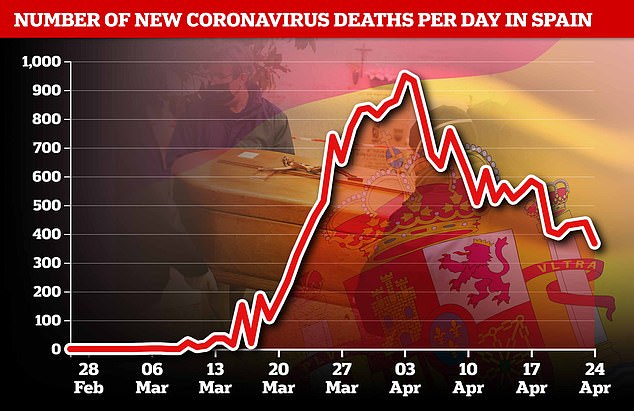 However, deaths fell to 367 in their smallest jump since March 21, as seen on this graph

Spain said today that 16,774 people had tested positive via the antibody test method, an increase of 3,944 from yesterday’s total of 12,830.

Only 2,976 of the 6,740 new cases were confirmed using a traditional PCR test, official figures showed.

The Madrid region accounted for 1,097 of those while the second worst-hit region of Catalonia was responsible for another 652.

Antibody tests show whether a patient’s immune system has developed defences against coronavirus, meaning they have been infected in the past.

However, governments in several countries have warned that antibody tests are not yet reliable enough to roll out on a large scale.

Spanish health officials  believe the epidemic peaked on April 2 when 950 people died over 24 hours, nearly three weeks after the government imposed a lockdown.

‘We have achieved the goal of a deceleration and slowdown for this week but we remain in a hard phase of the epidemic,’ health minister Salvador said yesterday.

The March 14 lockdown has been twice extended and parliament late on Wednesday approved a fresh extension until May 9,

However, conditions will be slightly eased from Sunday to allow children to spend some time outside. 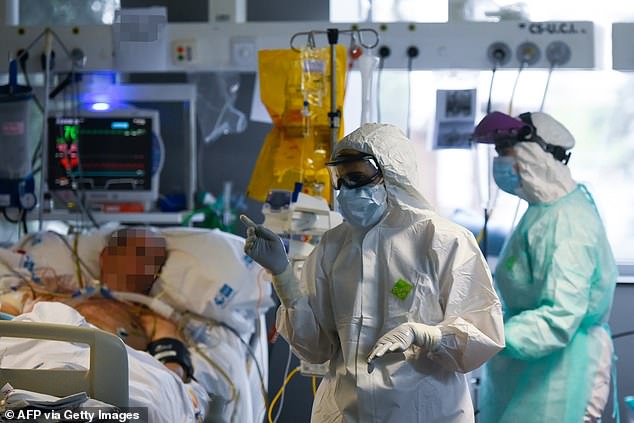 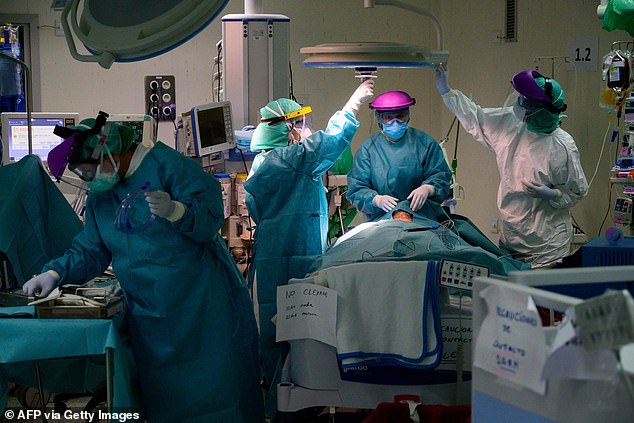 Medical workers wearing protective suits perform a tracheotomy on a coronavirus patient at a hospital in Madrid yesterday, in the worst-affected region of Spain

Prime Minister Pedro Sanchez hopes to ease some restrictions in the second half of May but warns that ‘de-escalation will be slow’.

In Madrid, authorities began shutting down hotels that had been hastily converted into medical centres after the outbreak left city hospitals unable to cope.

Hotels saw a 66 per cent plunge in foreign visitors in March, even though a shutdown only came late in the month.

Tourism usually accounts for 12 per cent of gross domestic product in the world’s second-most visited nation.

Meanwhile, a new study suggests that the virus may have been circulating among the population as early as mid-February, when the government only acknowledged ‘community transmission’ in early March.

Rhodes stays up despite Oxford protest

Boy who escaped from his family’s motel room in his Harry Potter pyjamas is...

Josie Gibson gets emotional as she talks about deaf brother’s ‘living...

Lowlife is caught on camera stealing a Vinnies collection tin at...