A racist thug attacked his girlfriend with a rolling pin and threatened to ‘take her eyes out’ with a knife during a shocking outburst of violence.

Drunk David Turner ‘went berserk’, grabbed the terrified woman by the throat and pulled her around by the neck and hair as he assaulted her at his father’s North Shields home after an argument erupted over money.

The 33-year-old struck the victim on the knuckles, knee and ankle with a rolling pin, leaving her with bruising and swelling, before throwing her out of the house in her bare feet.

And his violent outburst didn’t end there as, when the woman returned to collect her belongings a few hours later, he accused her of looking at other men and threatened to ‘take her f*****g eyes out’ with a knife, a court heard.

David Turner ‘went berserk’, grabbed the terrified woman by the throat and pulled her around by the neck and hair as he assaulted her at his father’s North Shields home after an argument erupted over money

When the police arrived, Turner had to be forcibly restrained after he repeatedly ‘snarled’ at officers and tried to bite them.

He was eventually taken to a police station but then defecated in his cell, prosecutors said.

Turner was bailed and awaiting a court appearance for those offences when, just three-months-later, he was arrested again for a separate matter.

This time, when he arrived at the police station, the thug hurled appalling racist abuse at a police officer, calling him a ‘p***i’ and threatening to slit his throat.

At previous court hearings, Turner pleaded guilty to breaching a non-molestation order, resisting a police officer and criminal damage but denied two counts of common assaults on his partner and assaulting an emergency worker.

He was later found guilty at a trial in his absence as he failed to attend. 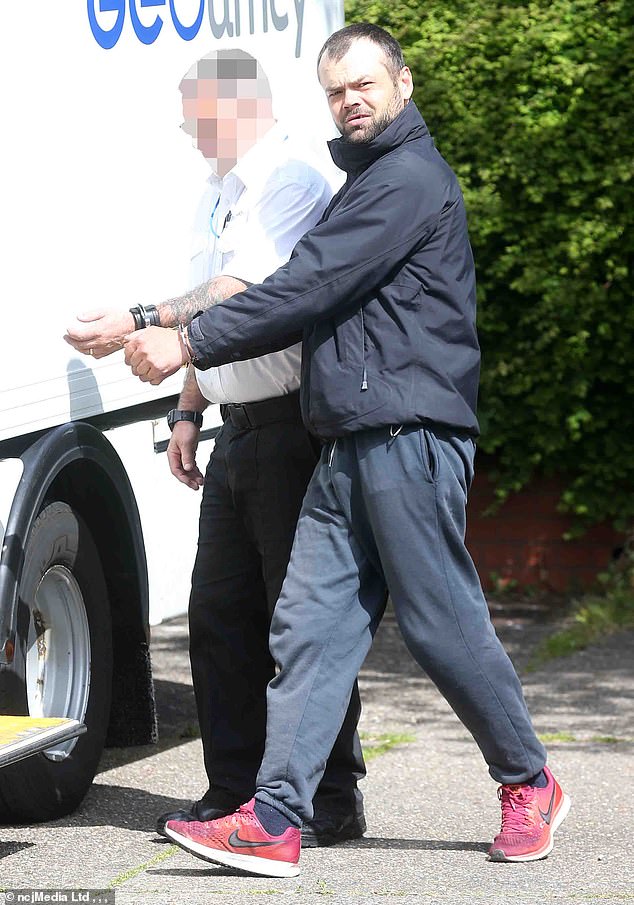 Turner was bailed and awaiting a court appearance, just three-months-later, he was arrested again for a separate matter. When he arrived at a police station, he hurled appalling racist abuse at a police officer, calling him a ‘p***i’ and threatening to slit his throat

Turner also pleaded guilty to a racially-aggravated public order offence, in relation to the abuse shouted at the police officer, but fled from the court building before he could be sentenced.

A warrant was issued for his arrest and Turner, of Dorest Avenue Wallsend, appeared at North Tyneside Magistrates’ Court on Tuesday, where he also admitted failing to surrender to custody.

Locking him up for a total of 26 weeks, District Judge Paul Currer said his behaviour was ‘despicable’.

The judge said: ‘You lost your temper when you were excessively drunk and assaulted her [his partner], not just with your hands but with a rolling pin. That’s despicable.

‘You treated her with complete disdain. When she came back after she thought you calmed down, you used a knife to threaten to take her eyes out – that’s appalling behaviour.’ 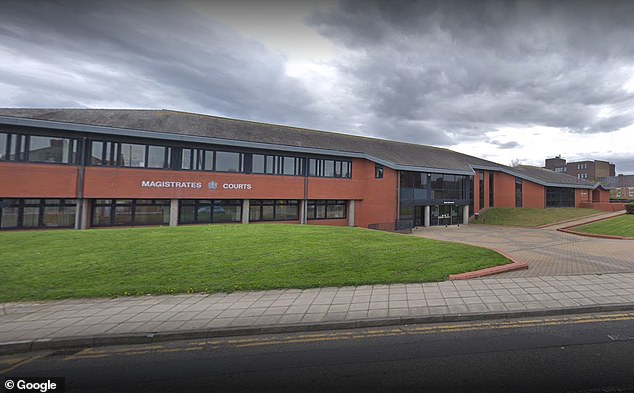 Turner was jailed for total of 26 weeks at North Tyneside Magistrates’ Court, with District Judge Paul Currer said his behaviour was ‘despicable’

In relation to the racist incident, District Judge Currer added: ‘You displayed the most appalling racist behaviour towards an officer who had nothing to do with your case.

‘You noticed his ethnicity and decided to make comment upon it and you were abusive and exceptionally threatening. I can’t imagine a more unpleasant way to behave towards anybody.’

The court heard that Turner was made subject of a non-molestation order in July 2019, which banned him from contacting his partner.

He breached that order a few days later by sending the woman text messages and a voicemail.

Then, on August 23 last year, Turner’s behaviour spiralled out of control when he was with the woman at his father’s North Shields home.

He told the court: ‘The defendant screamed at the injured party and called her a devious b****. He then picked up a rolling pin from a side draw and hit her with it. It made contact with her knuckles and ankle and knee.

‘She had swelling and bruising as a consequence. The defendant then grabbed her around the neck. She was struggling to breath but managed to break free.’

Still in a fit of rage, Turner pulled the terrified woman by her hair around the property and told her to leave, which she did in her bare feet.

A few hours later, the victim returned to the address to pick up her belongings, in the hope that Turner had calmed down.

Mr Taylor continued: ‘The defendant accused her of looking at other people. She describes him as going berserk and he grabbed her by her hair and neck and told her he would take her f*****g eyes out.’

The court heard that police arrived at the scene and Turner had to be forcibly restrained after he ‘snarled’ at officers and made repeated attempts to bite one of them.

When he was finally arrested and put into a cell at a police station, he defecated on the floor.

Three-months-later, on November 29, Turner was arrested again on a separate matter and taken to Wallsend Police Station, on Middle Engine Lane.

It was while he was being processed in the holding area that he turned his attentions on an officer, who was unrelated to his arrest.

Mr Taylor said: ‘The defendant says to the officer “I’m a racist, get this p***i away” and he gestured towards the officer.

‘Matters then turned more sinister when the defendant said ‘I’m 100% racist. If I see you on the street, I will slit your throat’.’

Having been arrested and summonsed to court for all the offences, Turner repeatedly failed to show until a warrant was issued for his arrest and he appeared in the dock in custody.

Through his solicitor, Stuart Moore, Turner made a plea to the judge to be given ‘one more chance’ and not be sent to prison.

Mr Moore said: ‘He’s 33 and has significant difficulties in terms of educational ability and emotional skills and mental health.

‘He appreciates the difficult situation he finds himself in and is aware you will be considering custody.

‘He does ask me to ask you to consider an alternative. He’s got these difficulties and last year was a year he was overwhelmed by tragedies when two of his uncles, a cousin and his dad all died in a very short space of time.

‘His head was all over the place.’

Mortician goes viral with response to woman who said she wanted...

Kylie Jenner goes makeup free as she poses in a hot...