Couple are ordered to cut 80ft conifer trees in their garden after owners of £300,000 neighbouring flats used high-hedge laws to complain they were blocking their light

By Katie Weston For Mailonline

A couple who have been ordered to chop down 80ft trees in their garden after neighbours complained have launched a bid to halt the ‘ridiculous’ demand.

Ferdinando and Angelina Franchitti claim lopping the conifer trees will ruin the privacy of their detached home in upmarket Bothwell, Lanarkshire.

The owners of three neighbouring flats used high hedge laws to complain about the trees and insisted they stopped light reaching their £300,000 properties.

But the Franchittis, who run a successful property business, have turned to the Scottish Government in a bid to have the ruling reversed.

Trees pictured centre, with the neighbouring flats on the left and the house on the right. The flat owners insisted the conifer trees stopped light reaching their £300,000 properties

An aerial view of the house and neighbouring flats in Bothwell, Lanarkshire, with the area of 80ft conifer trees that were complained about circled in red

The group, led by Dr Rod McClay, said the dispute started after trees shot up in height and attempts at reaching an agreement failed.

Discussions reached a stalemate and the neighbours turned to South Lanarkshire Council who launched an investigation before ordering the trees be reduced to 20ft.

Statements submitted by them deny the trees impact the neighbours and point out their flats were only built recently.

They said: ‘We appreciate the girth/overhand of the trees to the road of the trees could be reduced and are happy to do this if we can reach an agreement.

‘However we feel being asked to reduce the height is just to improve the view the residents may have and is completely unfounded and unfair.

‘The trees have been maintained at their current height long before the flats were even there. 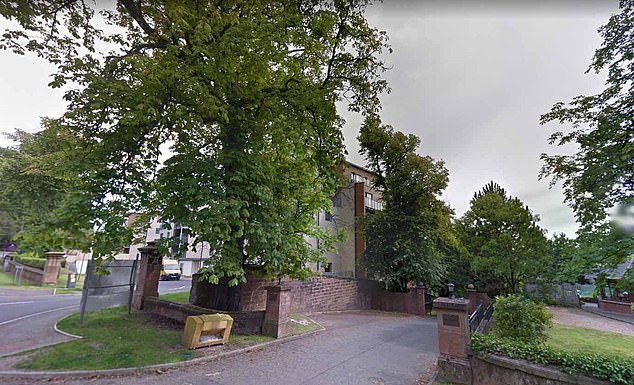 The trees which were complained about pictured next to the flats. Ferdinando and Angelina Franchitti claim lopping the trees will ruin the privacy of their detached home 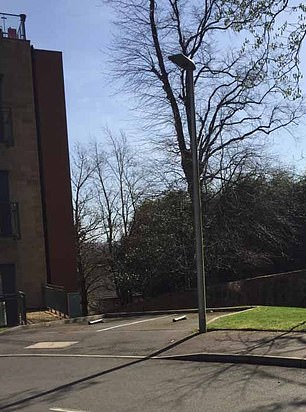 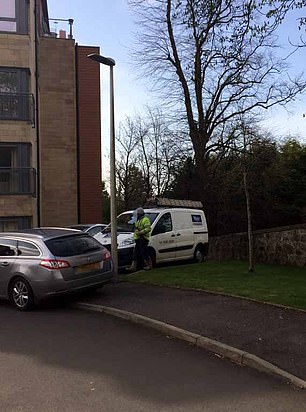 Pictures (above) show the trees next to the flats. The group, led by Dr Rod McClay, said the dispute started after trees shot up in height and attempts at reaching an agreement failed

‘Something that would have been evident to the owner of the flat at the time of purchase.’

They added: ‘The flats already invade our privacy excessively and it is ridiculous that we are being expected to reduce this privacy further.’

What is Scotland’s high hedge law?

It grants councils the power to act as independent adjudicators in disputes between neighbours about high hedges in their area.

Previously, there was no legislative solution in Scotland to resolve these hedge disputes.

The Act was revised in 2016 to remove the definition of a hedge after it was recommended that a hedge be defined in any revised guidance.

Dr McClay said he hoped to reach a ‘friendly’ agreement but insisted the trees had become overbearing since he moved into his flat in 2015.

He told the government: ‘We have made clear from the outset that our wish has been to find a mutually acceptable compromise that would continue to afford Mr and Mrs Franchitti an acceptable degree of privacy in their rear garden.

‘Following advice from an arboriculturalist we suggested a reduction in height to 13ft based on this advice.

‘The notice suggests a reduction to 20ft, we feel this compromise will continue to provide a greater degree of privacy than one would normally expect in a suburban rear garden while going some way to improving the light/shade problem in our flats.’

He added: ‘While we fully appreciate their concerns regarding privacy we feel it is unreasonable that these trees be allowed to grow unchecked so interfering with our enjoyment of our homes.’

High hedge laws were designed to address disputes between neighbours.

A reporter will issue a decision at a later date.

Olivia Buckland has lost 6lbs from eating healthily during lockdown