A Georgian country house which is the former home to fascist leader Sir Oswald Mosley and his Mitford sister wife Diana is on sale for £2.4million  (€2,750,000).

The politician led the British Union of Fascists movement, which had about 50,000 followers at its height, and bought the five-bedroom property with his second wife as a summer residence in the 1950s.

The 12-acre home, which boasts two restored guest cottages, is situated close to the historic town of Fermoy, Cork, and overlooks a salmon river.

The front of Ileclash House in Fermoy, Cork, from outside. The Georgian country house is the former home to to the founder of the British Union of Fascists Sir Oswald Mosley and his wife Diana – the most controversial of the famous Mitford sisters 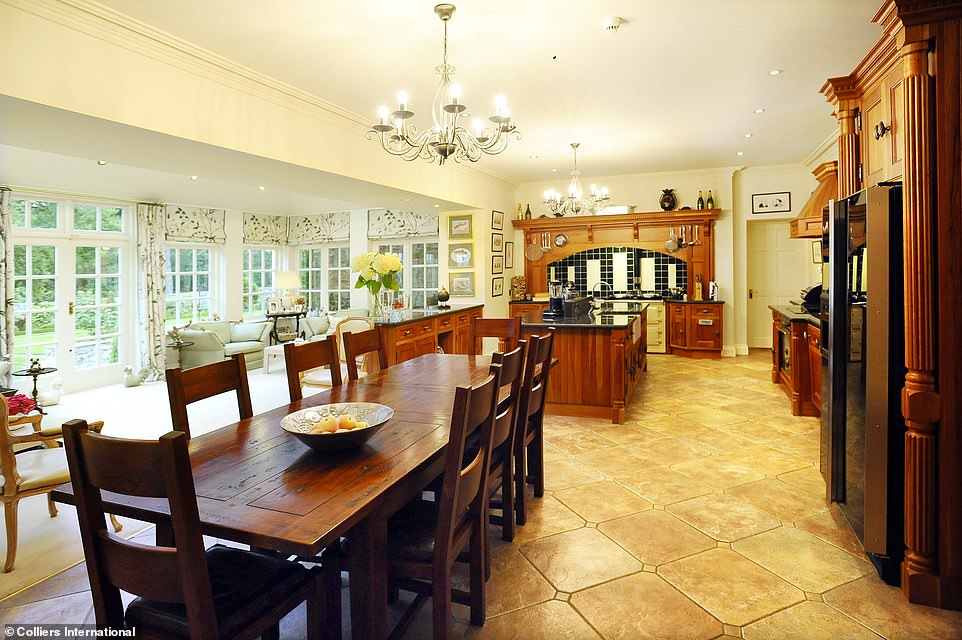 The property’s kitchen and family room – a spacious open planned area with a dining area, fitted with Cherrywood wall and floor units alongside a polished granite worktop with an inset hob, oven and a recess with a four oven Aga cooker 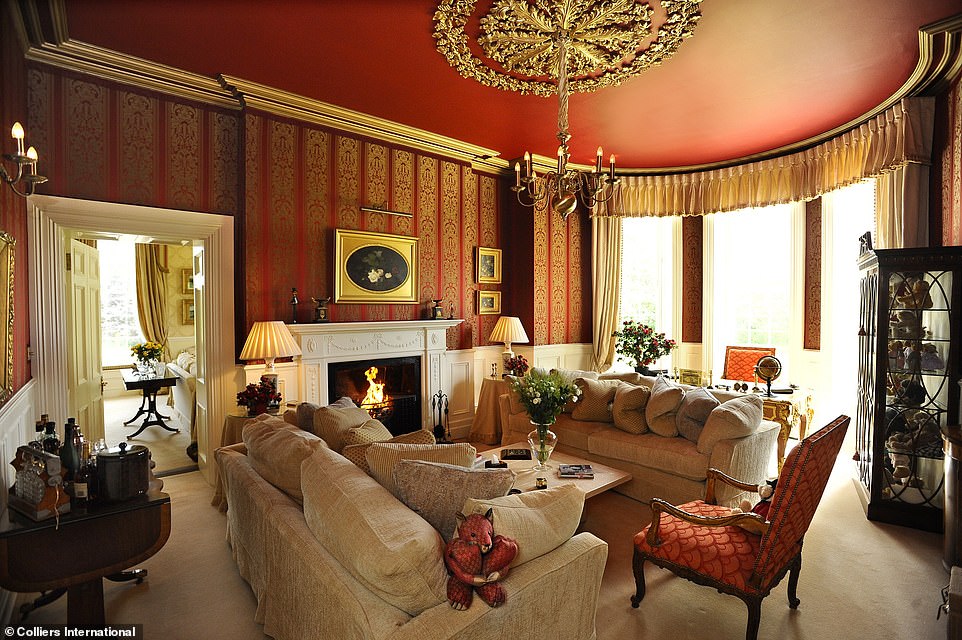 The bow-ended sitting room, decorated with a bold red and gold. The area also has a wooden mantelpiece with a fine cast iron inset and grate, alongside a golden chandelier hanging from the ceiling 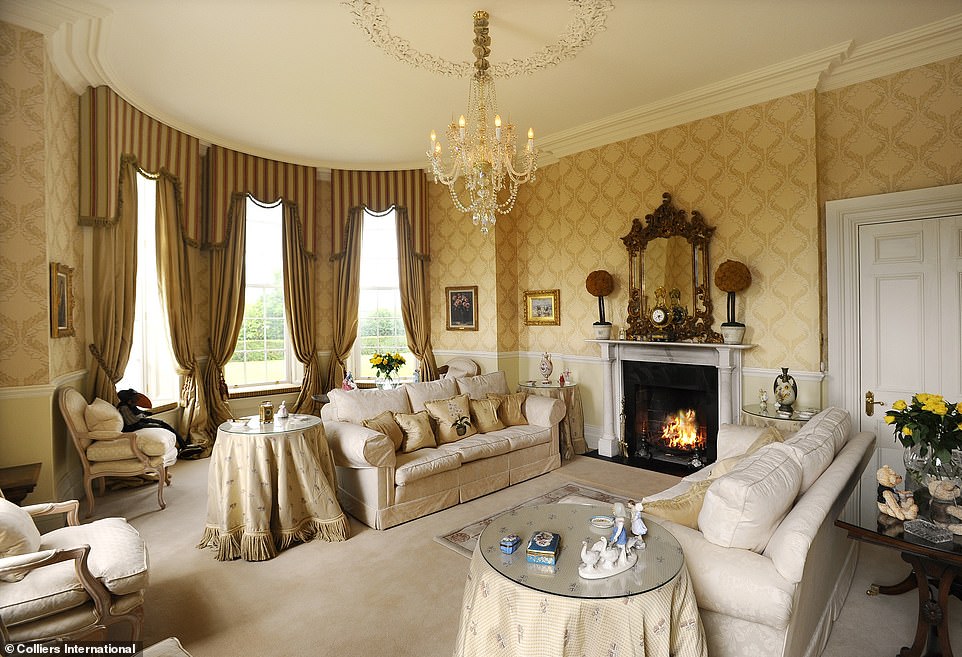 The drawing room, which features a bow window and a columned white marble mantelpiece, alongside ornate ceiling plaster work and window seating. The room has an adjoining door connecting to the sitting area 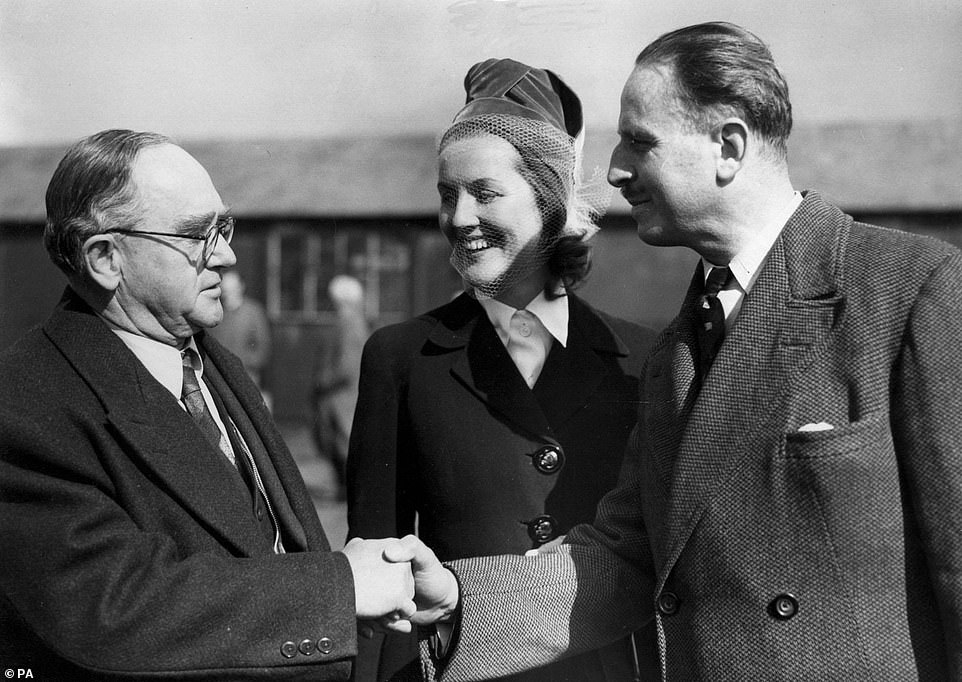 Ileclash House, which was once known as Licklash and Rock Ville, was built around 1830 and is near the ruins of Licklash Castle, once a Roche stronghold.

Upriver from the sprawling manor is also a metal railway bridge where American film actor George Peppard flew a biplane in the film The Blue Max.

Mosley married Mitford in secret in 1936, with Adolf Hitler as their wedding guest of honour. They held the ceremony at the home of Nazi propagandist Joseph Goebbels.

As a result, during World War Two she was locked up as an enemy to the Allies in Holloway Prison.

Mary S. Lovell, who has written a biography on the Mitford sisters, said Diana ‘became arguably the most hated woman in England for a while.’

After moving to Ireland, the couple first lived in a bishop’s place in Galway, but it burned down shortly after they purchased the property. 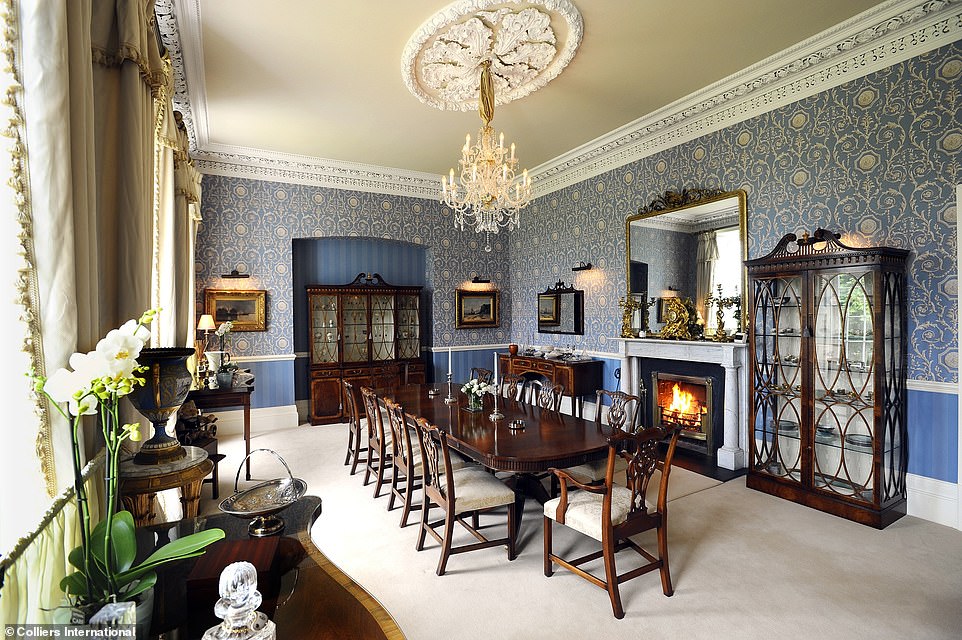 The dining area, which is connected to the sitting room, featuring fine cornicing and ceiling rose, a fireplace with a grey columned mantelpiece with a Georgian inset and grate, alongside French doors leading out to the garden 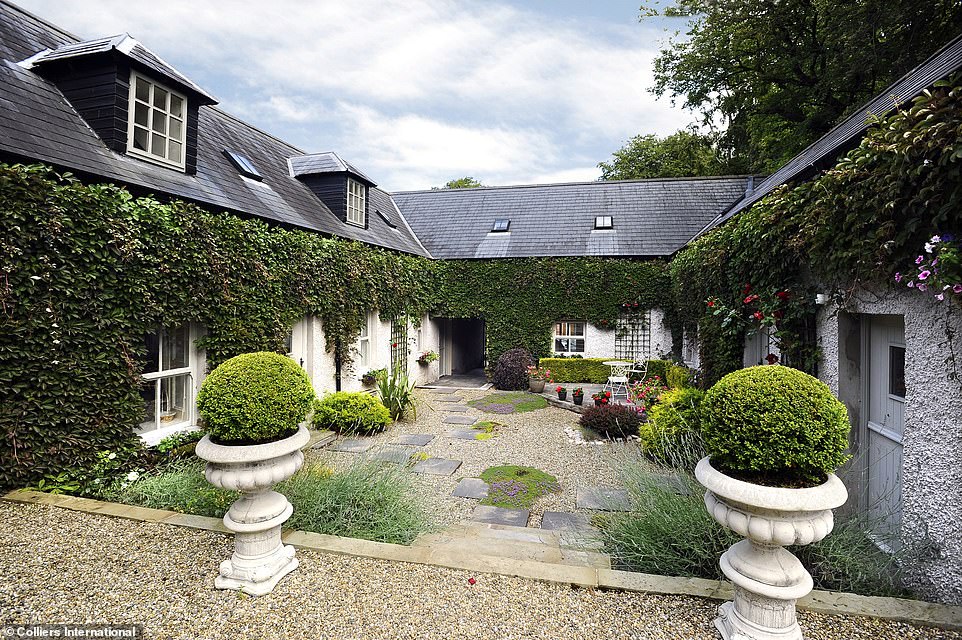 The outdoor area – the sprawling property has over 12 acres. There are also a number of rare Irish Red Squirrels and native Irish song birds that visit the garden, which includes a sun terrace 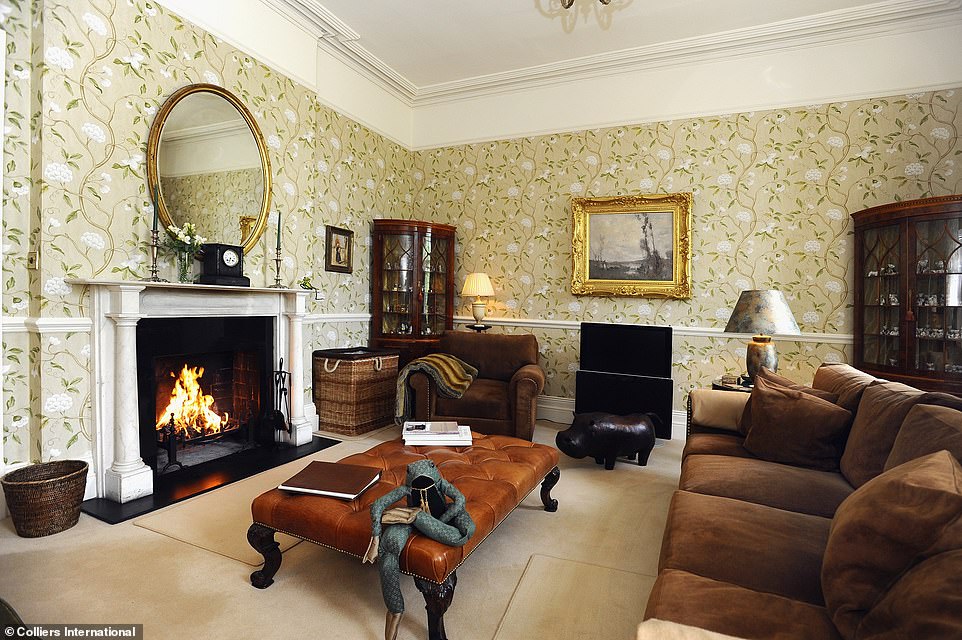 A living area, featuring a white-marble columned mantelpiece and floral wallpaper. Sir Oswald Mosley bought the five-bedroom property with his second wife as a summer residence in the 1950s 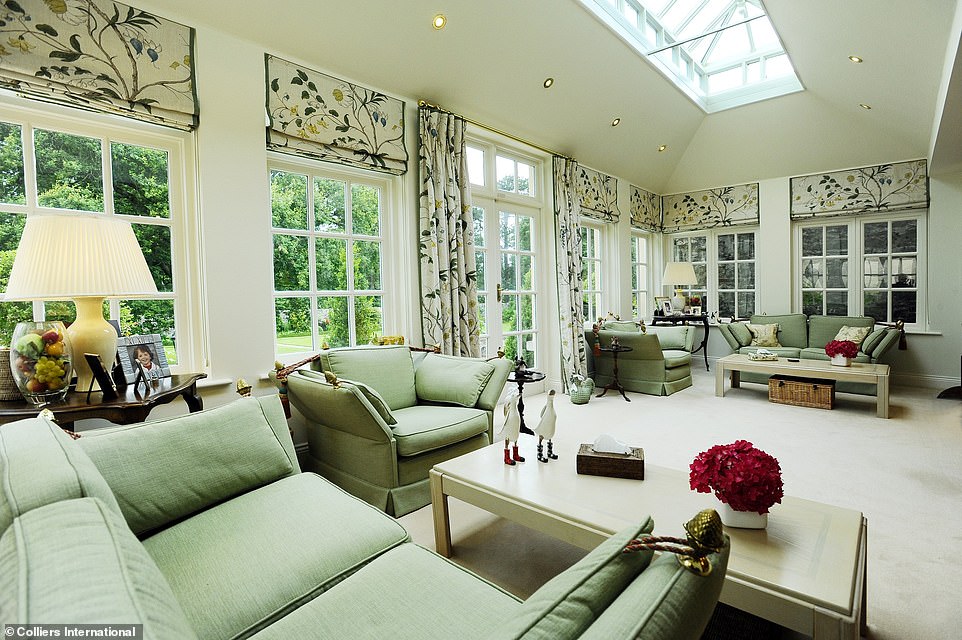 The large green-themed conservatory, which provides direct access to the walled garden, that includes a spacious sun terrace, box hedging, shrubberies and flower beds besides terraced lawns with walkways 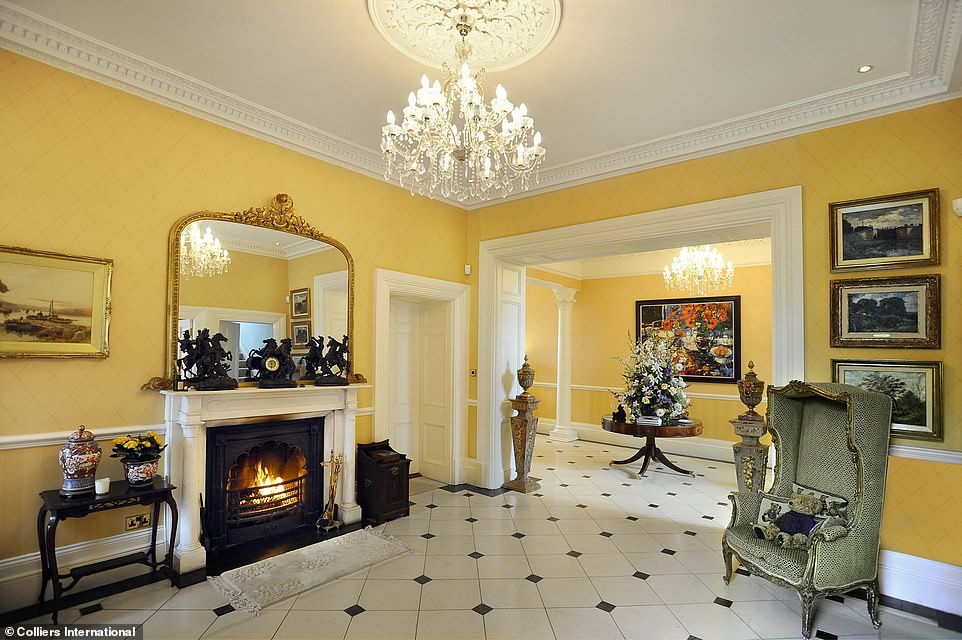 The morning room, with a white pillared marble mantelpiece, connecting to the reception hall near the front entrance. The property was transformed over four years after needing ‘substantial modernisation’ when acquired by the current owners 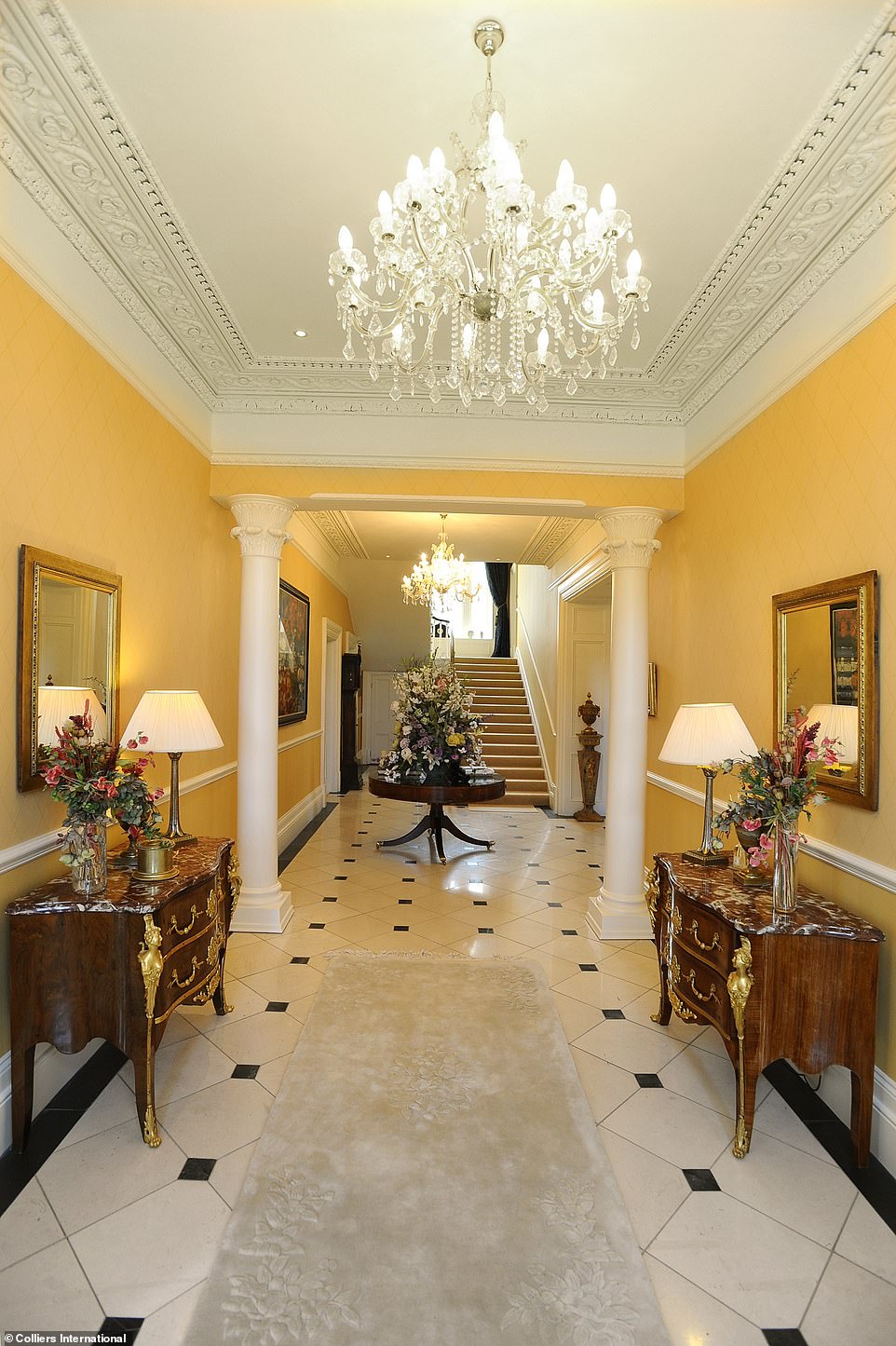 The reception room with a white and black floor, alongside two pillars flanking the staircase and symmetrical furniture on either side. On the right is the morning room and, left, an entrance to the drawing room

Mosley served as a Tory and Labour MP before he led the British Union of Fascists in the 1930s.

George Orwell once wrote that he doubted Mosley and his ilk ‘would ever be more than a joke to the majority of English’. 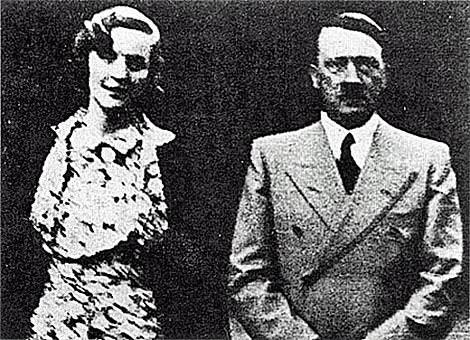 Mosley died in 1980, with his widow passing away in Paris at the age of 93 in 2003 having never renounced her fascism.

When acquired by the current owners, the property and grounds needed ‘substantial modernisation’ and were transformed over a period of four years.

Alongside a sun terrace and conservatory, there are also a number of rare Irish Red Squirrels and native Irish song birds that visit the garden.

The two cottages each have open-plan areas with a living and kitchen area, alongside two bedrooms and a bathroom. 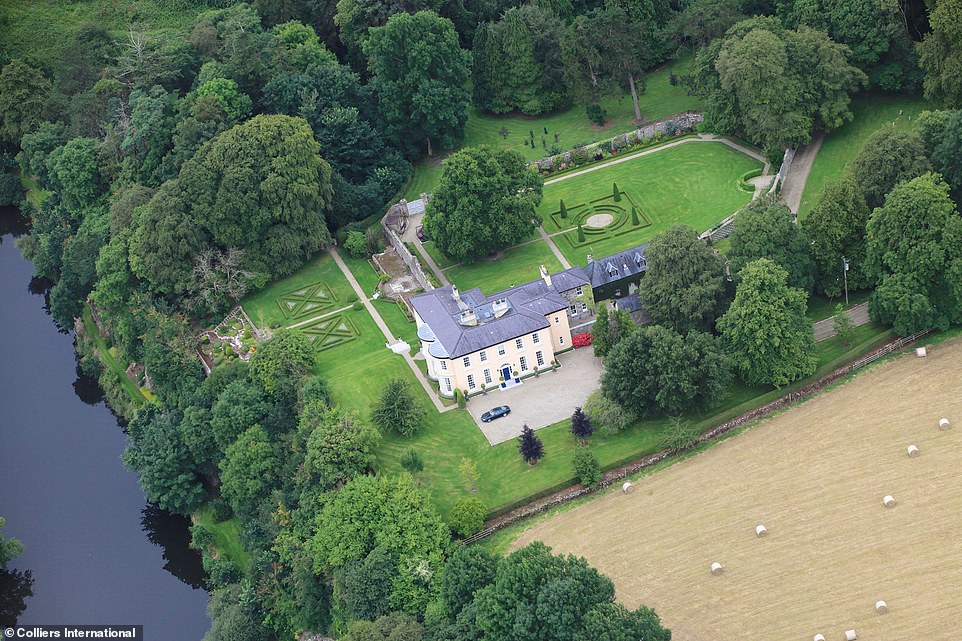 An aerial view of the Georgian country house in Cork, showing the driveway and surrounding fields. The current owners acquired the property in 2006 and are now looking to return to the UK 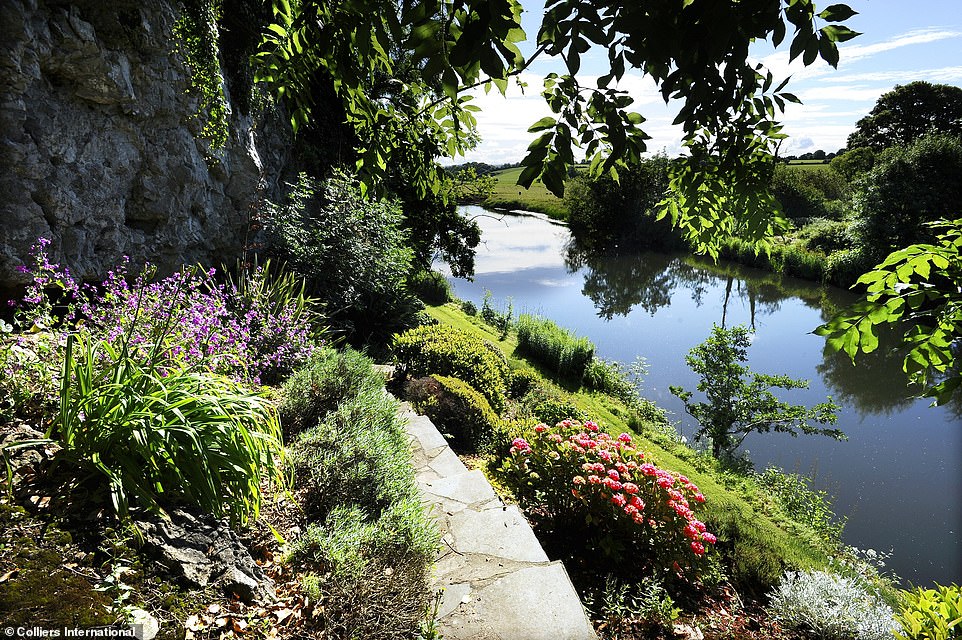 A shot of the garden’s extensive shrubbery and flower beds. Stone steps lead from the terraced lawns down to the riverbank garden, which has a number of natural limestone features 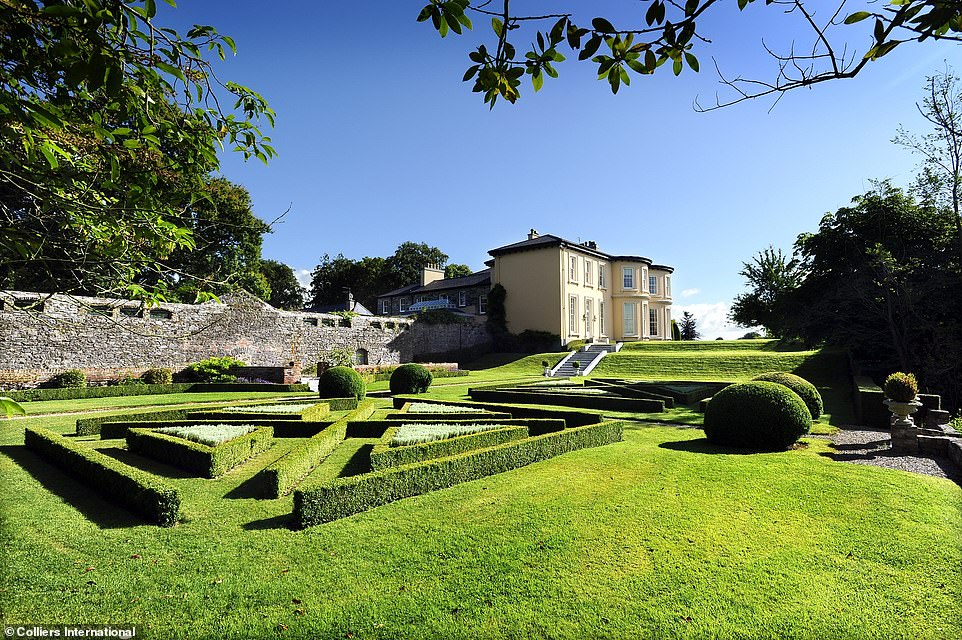 The garden, featuring a symmetrical design and neatly-trimmed hedges. The home also has two cottages, which each contain open-plan areas with a living and kitchen area, alongside two bedrooms and a bathroom 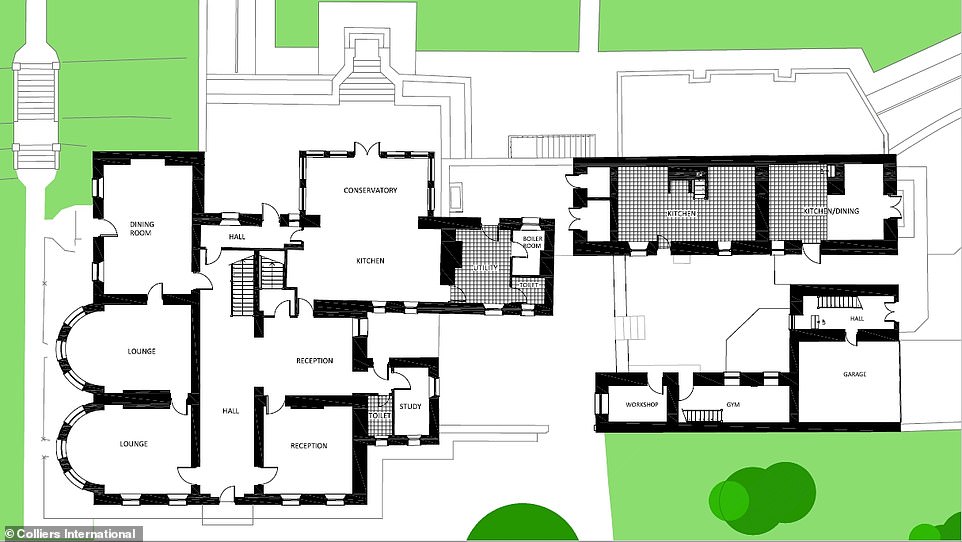 A floorplan of the property, which is on sale through Colliers International. The home includes a double reception hall, five reception rooms, a kitchen and conservatory, five bedrooms, a dressing room and six bathrooms

The owners told MailOnline: ‘We acquired the property in 2006 with the project of full restoration which we have now completed, and are looking to return to the United Kingdom, having had a wonderful and enjoyable experience of living in Ireland.’

Callum Bain, a senior surveyor at Colliers International, added: ‘Of the Irish country houses that I have been in, the detail to which the house has been restored is one of the finest.

‘The attention to the period of the property in combination with modern living is exceptional. Not only the house, but also the grounds and taking full advantage of its elevated position over a stretch of the River Blackwater.’

The property is on sale through Colliers International.

The six daughters moved in the same circles as Winston Churchill, John F Kennedy, Adolf Hitler and Evelyn Waugh and epitomised a privileged and glamorous aristocratic life that no longer exists.

The siblings – Nancy, Pam, Diana, Unity, Decca and Debo – born between 1905 and 1920 to Lord Redesdale and his wife Sydney, were notoriously known for the public interest their antics aroused.

The most controversial of the sisters was Diana, known as Honks, who left her first husband and married the founder of the British Union of Fascists Oswald Mosley. They tied the knot in a civil ceremony in Joseph Goebbels’ drawing room in Berlin in 1936. Hitler was a wedding guest of honour. 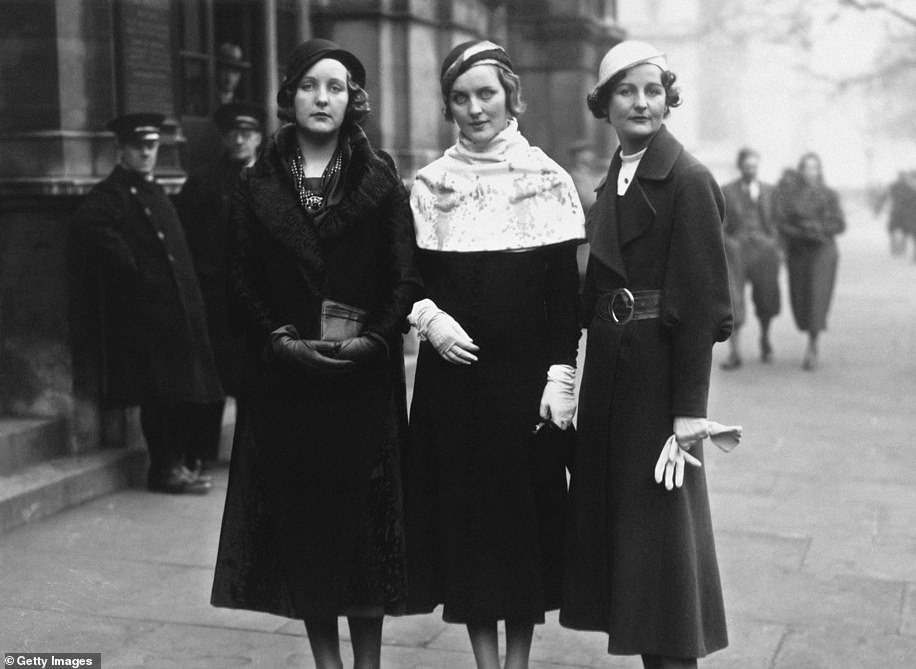 Three of the Mitford sisters pictured in 1932 at Lord Stanley of Aldernay’s wedding. From left to right: Unity, Diana, known as Mrs Bryan Guinness and later Lady Diana Mosley, and writer Nancy

As a result, during World War Two she was locked up as an enemy to the Allies in Holloway Prison.

Mary S. Lovell, who has written a biography on the Mitford sisters, said Diana ‘became arguably the most hated woman in England for a while.’

But Diana wasn’t the only Mitford with polarising political views. Decca was once an outspoken supporter of communism while Unity was also a fan of Hitler.

Both she and Diana attended the Nuremberg Nazi rally of 1933 and Unity was said to have become fascinated with the leader.

They became great friends – some even believe lovers. When war broke out, she was in Germany and shot herself in the head with a silver pistol. She survived but was brain damaged and was sent back to England to be nursed by her family. She died in 1948 of meningitis.

The sisters also had a brother, Tom, who died during World War Two in Burma. 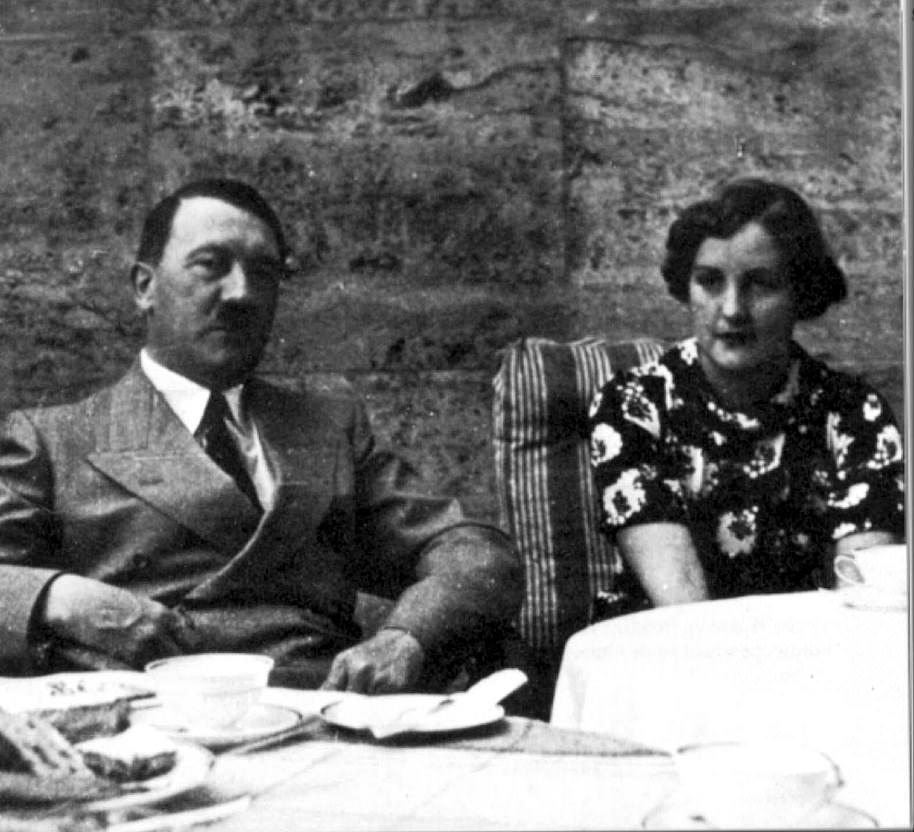 Unity Mitford pictured with Adolf Hitler. Both she and Diana attended the Nuremberg Nazi rally of 1933 and Unity was said to have become fascinated with the leader

The girls were raised in stately homes in relative isolation as their father didn’t believe they should go to school to be educated.

Despite this, they became prolific writers, the most successful being Nancy who wrote entertaining stories with outlandish characters based on her own family.

The Pursuit of Love and Love in a Cold Climate were her most popular novels and their appeal endures today.

As a writer with an affluent background, Nancy was a natural fit with the ‘Bright Young Things’ – the name given to the group of young aristocrats and socialites in 1920s, including Evelyn Waugh, who raised eyebrows with their partying.

Another famous associate of the Mitford sisters was Winston Churchill. In 1937 Decca, then 19, met her second cousin Esmond Romilly, Churchill’s nephew. They eloped to Spain during the civil war causing the British government to send a war ship to the country to try and bring them home.

They then moved to America where Decca remained until her death in 1996 but she had by then long lost her first husband who was killed in action during World War Two.

Pamela, the second eldest daughter, led the quietest life and was described as ‘the most rural of the Mitfords’ as she was more content on a farm than at at cocktail parties and balls.

Maria Shriver steps out for a stroll with a friend after daughter Katherine’s pregnancy...

Duke of Gloucester and his wife offer first ever look inside...

Australia considers opening up its borders to New Zealand

JEFF PRESTRIDGE: End this attack on the finances of the nation’s...