THE LIFE AND TIMES OF MALCOLM McLAREN

I blame the granny. Malcolm McLaren — summed up in this new 880-page biography by Paul Gorman as ‘entrepreneurial cultist, sexual evangelist, businessman, artist and fetishist’ — grew up in a dysfunctional, sweary 1950s household in North London, looked after by his maternal grandmother Rose, as his mother Emily was too busy having affairs and his father Peter had left.

Rose spoiled Malcolm but she also threaded embroidered silk ribbons into his pubic hair to ward off sexual encounters. Most significantly for his future, she advised her grandson, ‘To be bad is good, because to be good is simply boring.’

Paul Gorman reflects on the life of Malcolm McLaren in a new biography. Pictured: McLaren outside his shop Sex, on the King’s Road, London

Armed with this nugget of wisdom, McLaren arrived at adulthood as an amoral risk-taker. With his gang of angry art student friends he threw bricks wrapped as Christmas presents through church windows. That, said McLaren, was ‘my little conceptual art gesture’. How pretentious that sounds in hindsight. But you have to hand it to him: he was a kind of genius, always first to come up with something attention-grabbingly subversive.

He designed, for example, a T-shirt showing a picture of Snow White surrounded by seven aroused dwarves to sell in his and Vivienne Westwood’s shop, Sex, on the King’s Road. Why did they call the shop Sex? ‘Because that is the one thing that scares the English,’ he explained. In the mid-1960s McLaren had met the unhappily married suburban housewife, Vivienne Westwood. She fell madly in love, and thus began a productive partnership, her daring technical expertise combining with his unbounded imagination.

She divorced her husband and moved in with McLaren to a council flat in London. They had a baby, Ben, in whom McLaren took no interest. Vivienne would be in thrall to McLaren for 16 years, combining domestic drudgery with sewing from dawn to dusk to bring his fashion ideas to fruition.

In 1973, McLaren flounced off to the U.S. to chase another woman and discovered punk while he was at it.

His subsequent creating and managing of the Sex Pistols in the mid-1970s was the apogee of his philosophy: he positively wanted the group to be ‘bad’: to play badly and to do bad things such as hate each other, get high in the morning and throw beer glasses at fans.

As McLaren explained, they were ‘the epitome of chaos and disorder . . . This was where I had been most at home since I was a child.’ 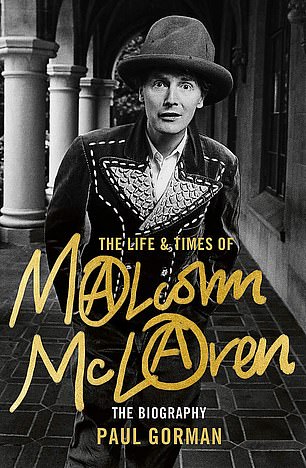 THE LIFE AND TIMES OF MALCOLM McLAREN by Paul Gorman (Constable £30, 880 pp)

McLaren saw the potential in these musically inept nihilists. He also made them sign away their rights, causing later legal battles.

After touting the Sex Pistols round the world, with as few concerts as possible to keep the public on edge, he broke up the group on purpose. Vicious’s girlfriend died from stab wounds at their New York apartment, and Vicious died of an overdose. Meanwhile things were falling apart at 430 King’s Road: the staff were stealing clothes to feed their heroin habits. He and Vivienne were throwing bowls of soup at each other. Eventually she broke free of him.

With hundreds of pages still to go at this point, I got bogged down when McLaren went from project to project. Steven Spielberg hired him as a movie producer, but not one film was made in six years, and he felt stale and bored.

In the late 1980s he appeared stoned on television: ‘I’m going to see my mother, and I haven’t seen her in 22 years,’ he explained. Their reunion was disastrous — she told him he was the spitting image of his grandmother Rose, ‘the most hideous woman who ever lived’.

Asked by an interviewer in 2005 whether he had ever loved anybody, Malcolm’s answer was, surprisingly and touchingly, ‘Vivienne.’

Inside the Hembrow sisters’ new Sskin clinic with celebrity-approved treatments

Karl Lagerfeld’s mother ‘strapped him to his bed to stop him...

April Love Geary showcases summer style in a sundress … after...