Retiree from bushfire-ravaged town scoops $2.5million in the Lotto Super draw – and he says the money couldn’t have come at a better time

A man from a bushfire-ravaged town won $2.5million in Saturday’s Lotto Super draw.

The Batemans Bay resident on the New South Wales south coast wished to remain anonymous, and said he couldn’t wait to tell his family the great news.

‘I’ve dreamed about winning the lottery before and calling my family to tell them and now I can do that! I’m going to do that right now,’ the winner told The Lott.

The retiree had no idea that he was one of eight division one winners in the draw, and said his big win couldn’t have come at a better time after a traumatic bushfire season.

‘We didn’t personally lose our home but homes around us were destroyed and we were evacuated to the beach,’ he said.

‘The town was black and red. It was frightening.

‘This couldn’t have come at a better time.’

The winner said he would break the news to his wife over dinner, with his big win allowing her to stop working and join him in retirement.

He shared his prize with seven other winners; three from Victoria, two from Western Australia and two from online sales.

There were 289 Saturday division one winning Lotto entires in 2019, who took home a collective prize of more than $333million. 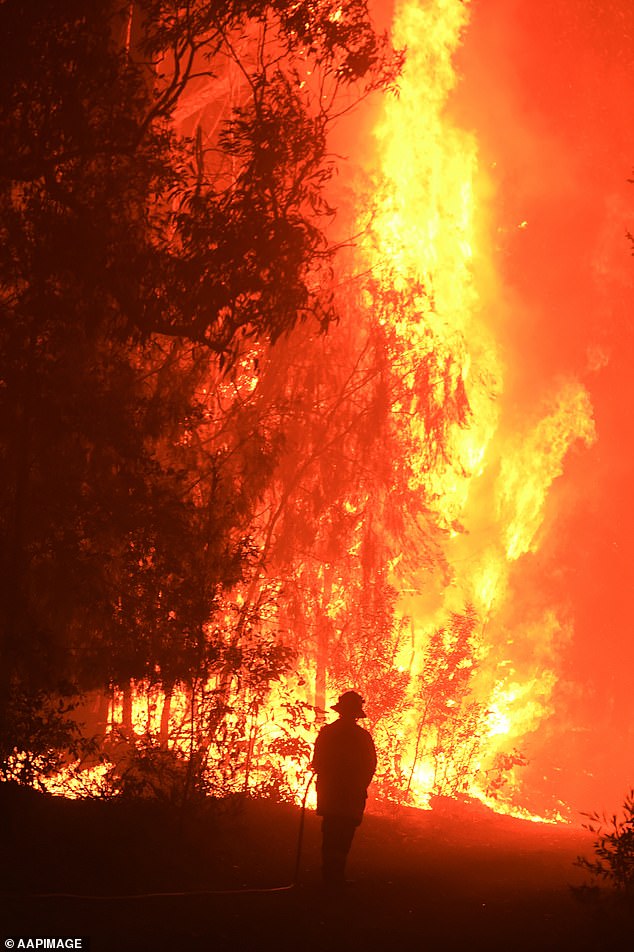 The winner said his prize couldn’t have come at a better time, after his community was rocked by horror bushfires over the summer season. Pictured: a firefighter stands before an out-of-control blaze near Termeil on the Princes Highway between Bateman’s Bay and Ulladulla in December

Hundreds of BP customers wrongly given receipts showing they had won points worth £2,000

Pro-Beijing business group sues over claims book that British elite is ‘being groomed by...

Hundreds of BP customers wrongly given receipts showing they had won...

Lady Gaga makes a plea for peace in stunning gown with...