With all driving tests suspended until 20 June 2020 due to coronavirus, there’ll be a backlog of learners desperate to take their practical test come the summer.

If the lockdown has lifted by then, test bookings are expected to be choc-a-bloc for weeks.

But should learners be going to their nearest test centre or hand-picking a location with a high success rate? Official figures from the Driver and Vehicles Standards Agency show there’s a huge difference in first-time passes by area…

Best and worst test centres to pass a driving test first time: DVSA records show these are the 20 UK test centres with the highest and lowest first-time pass rates in 2018-19

With the Government announcing that all tests arranged for three months from 20 March are suspended due to the Covid-19 pandemic, thousands of learners are chomping at the bit to upgrade their provisional licence into a full one.

Instead of growing frustrated about not being able to drive, these budding motorists could use this time in lockdown to research where might be best place to take their test once the Government gives centres the green light to go ahead with driving exams.

Comparison site GoCompare has been able to name the test centres with the highest first-time pass rates.

DVSA data shows that some 1.6million first-time tests were undertaken in 2018-19 at 324 centres around the country.

Of these, just under 682,000 learners passed at the first go, which is an average success rate of 47 per cent.

This data allows us to rank the nation’s best and worst centres for first-time pass rates.

But we’ve also exclusively provided the full list of locations in a table below so that learners can work out which examination centres nearest to them will increase their chances of passing first time, and which nearby locations might hinder their chances of getting behind the wheel.

The biggest factor in this isn’t the test centre or examiners themselves, but surrounding roads around centres where invigilators will ask learners to drive.

Some centres are in easy reach of complicated junctions and busy routes, while others will have fewer roundabouts to navigate and less traffic to deal with – which explains why the highest pass rates are in rural parts of the country. 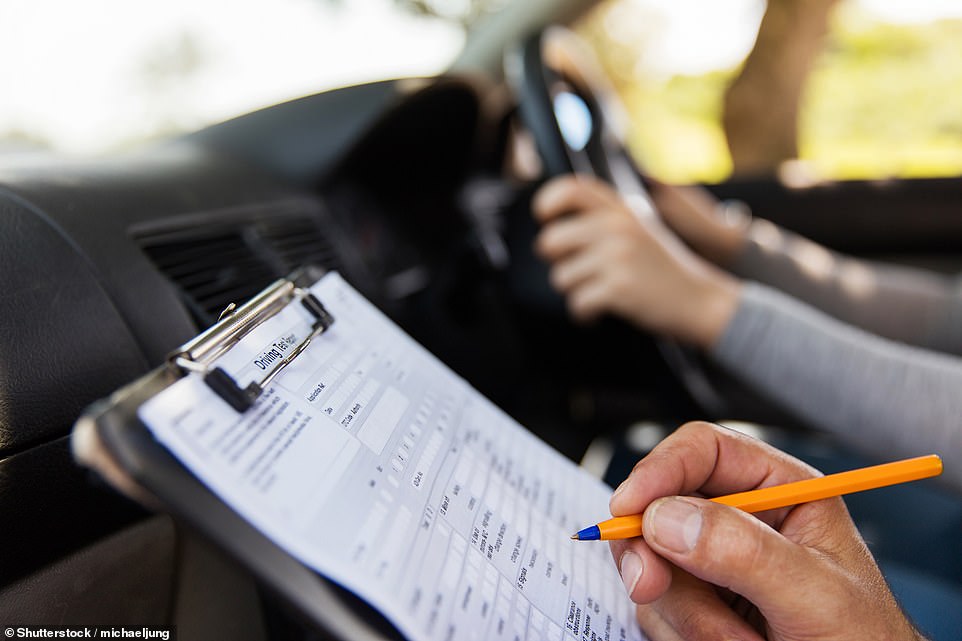 A 20-mile journey can separate a driving test centre with a very high first-time pass rate from one with an exceptionally low success rate for learners, the data shows

But the difference between a high first-time pass rate and an exceptionally low one could be separated by just 20 miles or less.

For instance, the Hyde test centre on the outskirts of Manchester has a 57.2 per cent first-time pass rate, while Bury and Rochdale – both within an 18-mile drive – have some of the lowest first-go success rates, at 32.5 per cent and 32.7 per cent respectively.

Learners in London might also benefit from taking a test in Essex rather than the capital, with Brentwood’s test centre having a 55.6 per cent first-time pass rate.

That compares to a 34.1 per cent success rate in Barnet, North London, and 32 per cent first-time pass rates south of the River Thames in Erith and Belvedere.

The study found that the places with the best chance of passing are based in Scotland, Wales, Northumberland and Yorkshire.

With GoCompare calculating that the average cost to pass a test first time – including 22 lessons and the price of a theory test – is £647, learners could save themselves some cash if they chose a centre with a higher average pass rate. 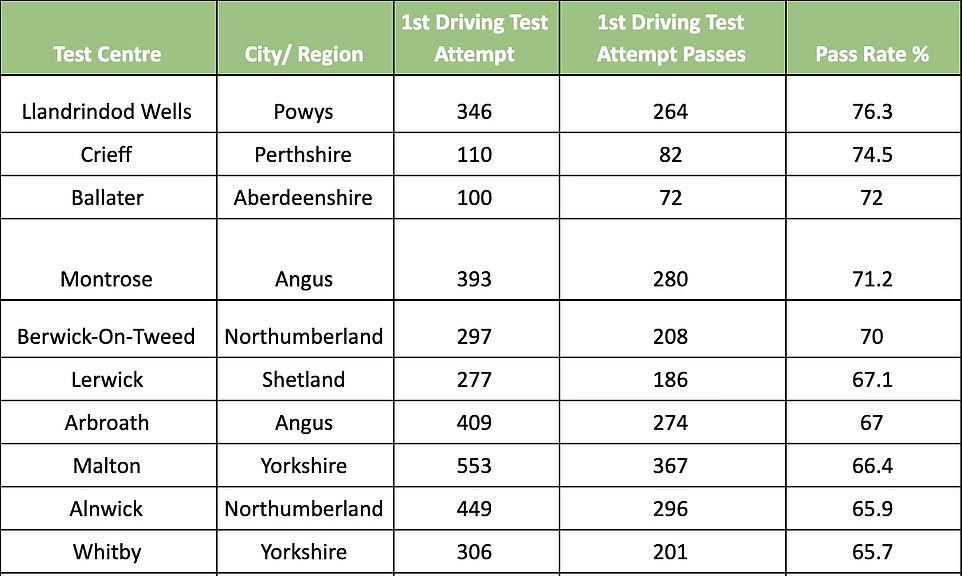 These are the 10 test centres with the highest pass rates in the previous 12 months, according to the DVSA 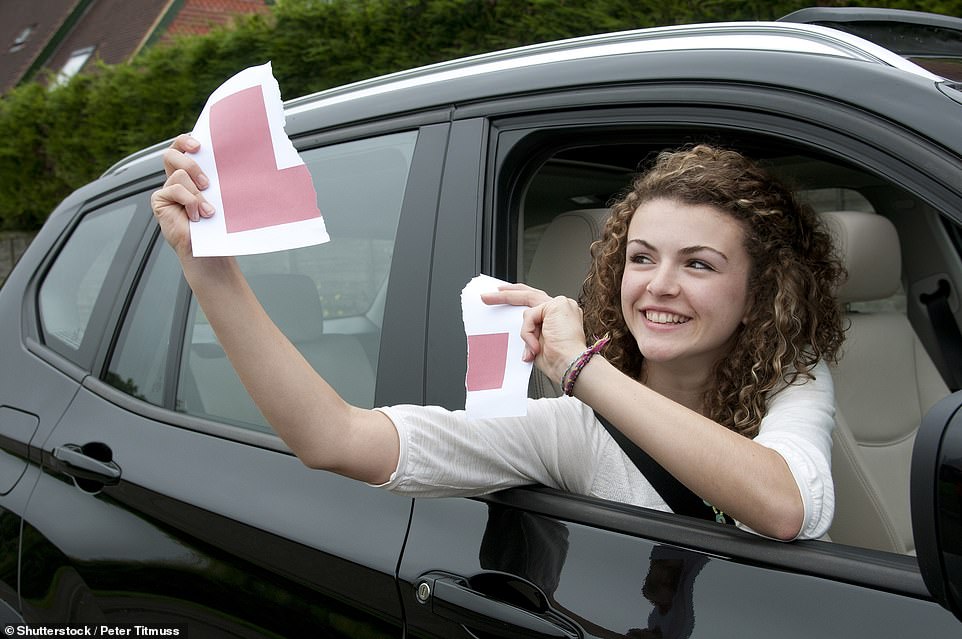 The biggest factor differentiating a test centre with a high pass rate from one with a low success rate for learners isn’t the test centre or examiners themselves, but surrounding roads around centres where invigilators will ask learners to drive

The data shows that Llandrindod Wells in Powys, Wales is the test centre with the highest first-time pass rate of 76.3 per cent, as three out of four people taking their test in the town received their licence straightaway.

Crieff in Perthshire is a close second as 74.5 per cent passed at the first attempt.

For those in Yorkshire, the report reveals that Malton is the best place to take your test with a 66 per cent first-time pass rate overall.

Unsurprisingly, the areas with the lowest first-time pass rates are big cities with lots of congestion, busy junctions and a bounty of roundabouts and intersections.

Birmingham, London and Manchester all have test centres with the lowest pass rates, it DVSA data shows,

The Pavillion in Birmingham is the hardest in the UK with just a 29.3 per cent pass rate at the first go.

South Yardley, a busier centre also based in Birmingham placed second as 1850 learners failed their test.

These metropolitan areas are full of hazards that can put off even a well-seasoned driver during rush hour, so they are best to avoid if you’re looking for a quick win. 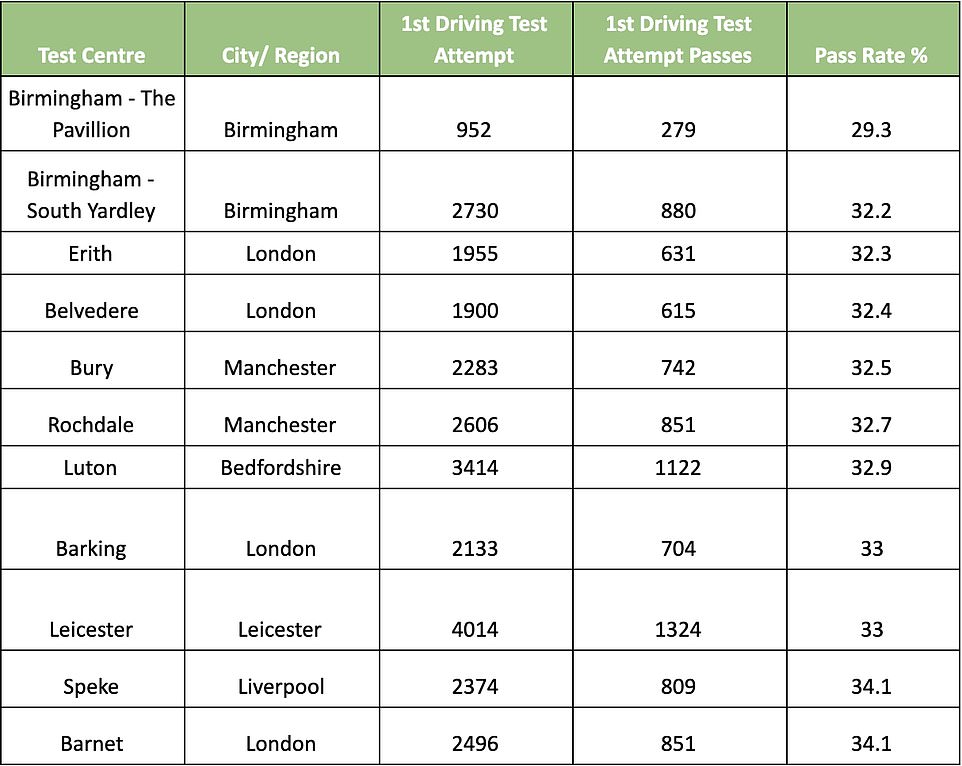 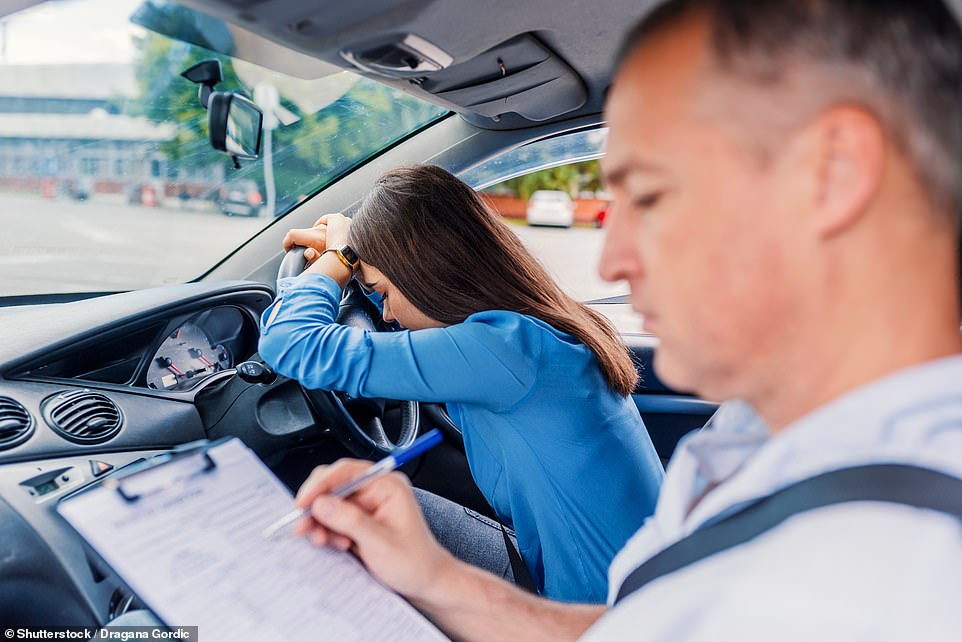 The good news for lockdown learners is that pass rates, in general, have been increasing in recent years.

In December 2017, a number of changes were introduced to driving tests which corresponded with a 14 per cent decrease in first-time pass rates from June 2017 to 2018.

Within a year of these new measures being introduced, there was a 116 per cent increase in first-rate passes.

Matt Oliver, senior partner development manager from GoCompare, said: ‘Preparation is always the key when it comes to tackling any challenge. But there’s no harm in looking at extra ways to boost your chances, and choosing a quieter route can keep your nerves at a minimum.

‘The most common reason for failure in driving tests is responding incorrectly at lights.

‘At busy junctions, it’s easy to lose your concentration when surrounded by different distractions – choosing a quieter location is a good way to limit this risk.

‘Once you’ve chosen your test centre, drive the routes as often as possible, so you can get used to the trickier roads.’

Learners can find their nearest driving test centres in the full list below. They call also test their theory test skills in our quiz at the bottom of this page.

If you’re using our app and can’t see the quiz on your mobile device, click on this link to answer the 10 questions

Mass roll-out of Covid vaccine could be delayed for TWO YEARS, expert says

Surfboard lost in Hawaii resurfaces than 5,200 miles away six months later in the Philippines

Shamima Begum is pictured wearing jeans, shirt and a blue hat as she walks through refugee camp

Dr Fauci tells Americans to ‘hunker down’ for fall and winter

HOROSCOPES: Everything will work out this week, Virgo

Airport testing and closing borders probably DO work to stop Covid-19, but evidence is...

Mass roll-out of Covid vaccine could be delayed for TWO YEARS,...

Surfboard lost in Hawaii resurfaces than 5,200 miles away six months...

More than three million English people are so fat they qualify...

Which? finds M&S cheaper than Waitrose ahead of Ocado launch