By Dianne Apen-sadler For Mailonline

The ‘baby Donald Trump‘ blimp flying over Parliament Square as part of protests during the U.S. President’s visit has been deflated by a Tommy Robinson supporter.

An angry woman livestreamed herself attacking the floating object earlier today before being arrested by police.

Protesters first flew a 20ft likeness of the president over the capital in July last year, with London Mayor Sadiq Khan causing controversy by allowing it to be used.

The woman popped the balloon while shouting ‘that’s a disgrace’. Anti-Trump protesters were pictured packing up the blimp after the incident. 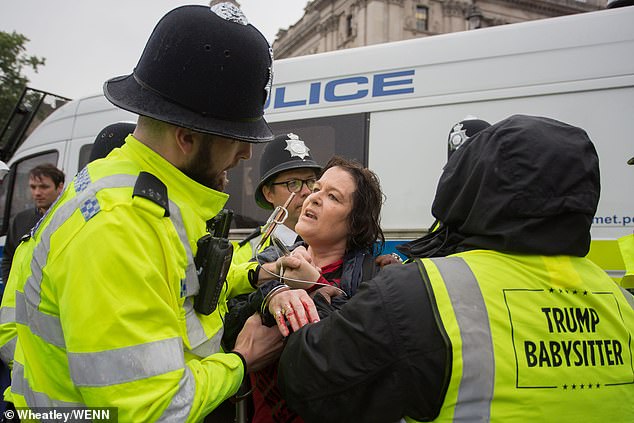 The woman, pictured, filmed herself deflating the balloon while shouting ‘that’s a disgrace’

A Metropolitan police spokesperson said: ‘As of 5pm on Tuesday, 4 June, one female has been arrested for being in possession of a pointed/bladed article.’

The woman, who is believed to be Amy Beth Dallamura, claimed the attack was a birthday present to herself during the video broadcast.

Dallamura uses the handle Based Amy when posting online and has previously been spotted at marches in support of Mr Robinson, whose real name is Stephen Yaxley-Lennon.

Around 30,000 people attended today’s protests – a much smaller number than expected by organisers, who blamed a ‘working Tuesday’ for the lower number.

Labour leader Jeremy Corbyn raged at the US President in a frothing speech at Parliament Square – condemning him for treating refugees like ‘enemies’, ignoring climate change, and trying to exploit the NHS for profit. 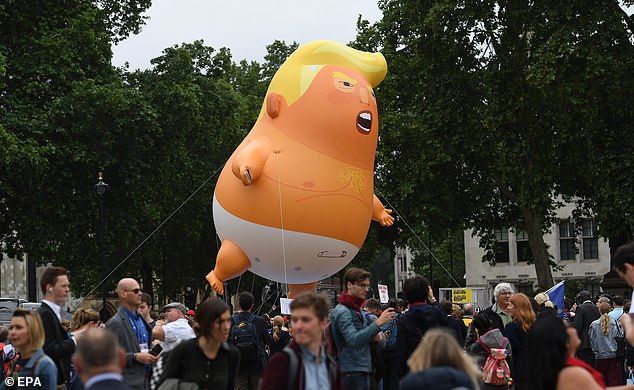 Protesters first flew a 20ft likeness of the president in July last year, and London Mayor Sadiq Khan caused controversy by allowing it to be used 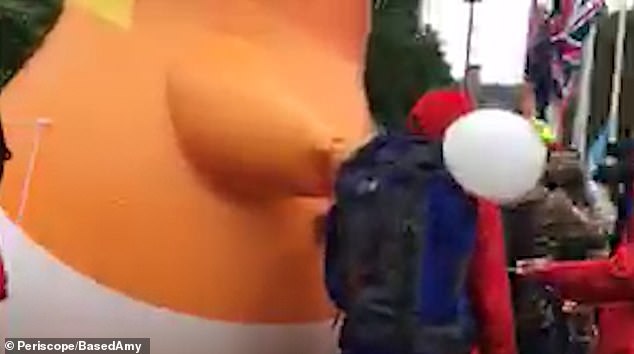 The woman, who is believed to be Amy Beth Dallamura, claimed the attack was a birthday present to herself during the video broadcast (pictured) 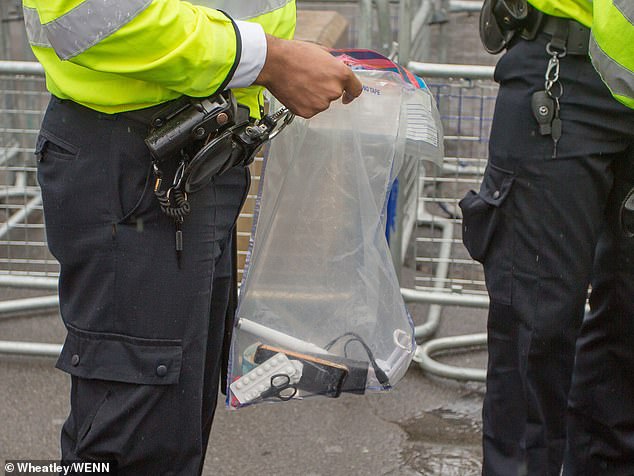 Pictured: officers holding an evidence bag with the woman’s items inside them, including what appears to be a pair of scissors

Summer is over! Temperatures are set to plummet as today’s autumn equinox brings wind and rain

How much have house prices worth in your area?

Ted Cruz: More Chinese consulates could close after China used Houston premises as ‘base for spying’

TOM LEONARD: The ex-vacuum salesman who sucked up the Sussexes

RICHARD KAY: Amber Heard is banking on this formidable legal duo to slip a...

Summer is over! Temperatures are set to plummet as today’s autumn...

Leighton Buzzard is hit by third earthquake in two weeks as...

How much have house prices worth in your area?

Cecil Rhodes protests will CONTINUE until statue is removed