Michael Jordan‘s controversial history with gambling was laid bare in the latest episode of The Last Dance where the basketball legend reiterated he was addicted to competition – not placing bets.

The ESPN docuseries aired its sixth episode on Sunday laying out Jordan’s questionable stints with gambling, but the NBA star insists he ‘didn’t do anything wrong’.

‘I never bet on games. I only bet on myself, and that was golf. Do I like playing blackjack? Yeah… The League called me and asked questions about it and I told them,’ he said three decades after the controversy in the documentary.

When asked if he had a gambling problem the 57-year-old said: ‘No, because I could stop gambling. I have a competition problem, a competitive problem.’

Michael Jordan’s controversial history with gambling was laid bare in the latest episode of The Last Dance where the basketball legend reiterated he was addicted to competition – not placing bets. ‘I have a competition problem, a competitive problem,’ he said

The episode covered the Bulls 1993 Eastern Conference Finals showdown with the Knicks, the very game where Jordan’s gambling was thrust into the national spotlight.

After the Chicago Bulls lost the first two games in the series to the New York team, it was revealed that Jordan had spent the night in gambling hub Atlantic City the night before Game 2.

A New York Times report found that Jordan was seen at the casino lobby as late as 2:30am and he appeared tired in the second game.

Today Jordan says that the scandal was exaggerated and that his trip to Atlantic City didn’t affect his performance in the game at all.

‘We got a limo, we went and gambled for a couple hours, and we came back. Everybody went totally ballistic. It wasn’t late. We got home by 12:30, 1 o’clock,’ Jordan said. 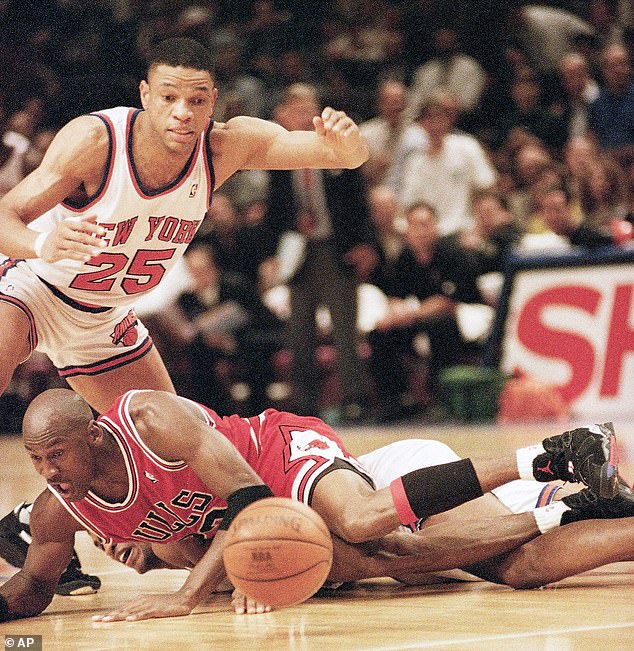 Jordan’s gambling came under the national spotlight in the early 90s after he was placing golf bets and spending late nights in Atlantic City. Pictured above during the closing minutes of the Knicks’ 96-61 win over the Chicago Bulls in game two of the NBA Eastern Conference Finals in May 1993. The night before he had been gambling at Atlantic City into the early hours of the morning 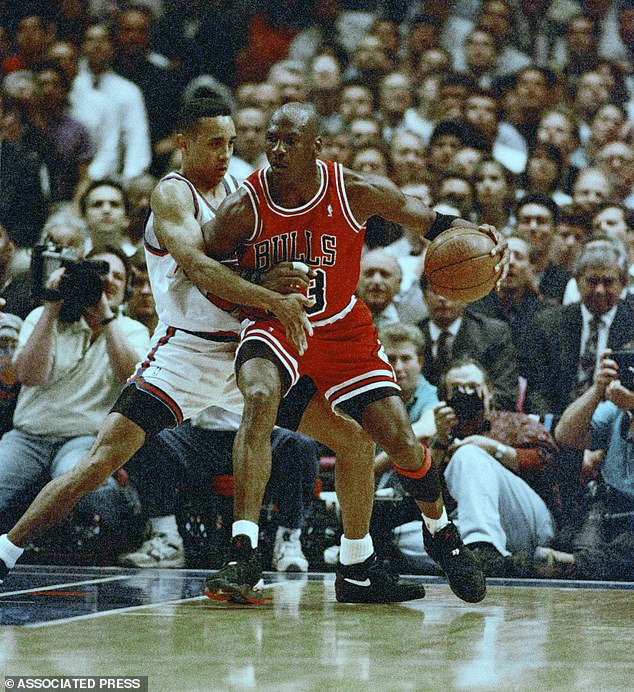 ‘I enjoy it, it’s a hobby. If I had a problem, I’d be starving. I’d be hawking this watch, my championship rings, I would sell my house. My wife would have left me, or she’d be starving. I do not have a problem, I enjoy gambling,’ he said in a 1993 interview with Ahmad Rashad on the controversy. Pictured on the court May 25, 1993

Jordan also faced scrutiny for skipping the Bulls’ White House visit after the 1991 NBA Finals after it was revealed he did so to gamble with notorious golf shop owner and convicted cocaine dealer James ‘Slim’ Bouler.

When Bouler was arrested on drug and money laundering charges, investigators found a $57,000 check addressed to him from Jordan, which was to repay a gambling debt.

In 1993 Richard Esquinas, a self-described recovering gambler, published his book ‘Michael and Me’ which documented his and Jordan’s supposed gambling addictions.

Esquinas claimed he owed him more than $1.2million from gambling on their golf matches.

In an interview with Ahmad Rashad, Michael Jordan addresses his gambling while wearing sunglasses indoors.

At one point some of the public speculated that Jordan was betting on NBA games – which he shut down.

‘I enjoy it, it’s a hobby. If I had a problem, I’d be starving. I’d be hawking this watch, my championship rings, I would sell my house. My wife would have left me, or she’d be starving. I do not have a problem, I enjoy gambling,’ he said in a 1993 interview with Ahmad Rashad on the controversy.

The gambling claims and debt launched an NBA investigation, but Jordan retired in October 1993, before it concluded.

Much of of Sunday’s episodes focused on Jordan’s struggle with fame, which is something his younger teammates learned to deal with during their time together.

B.J. Armstrong, for one, learned that keeping up with Jordan off the court was just as hard as it was on the hardwood.

Whether it was during his rookie season when his stall in the Bulls locker room was adjacent to Jordan’s locker, or at a dinner with the six-time NBA champion and Kobe Bryant about a quarter-century later, Armstrong often found himself with a front-row seat to witness the true cost of fame for arguably the world’s most recognizable athlete.

‘I remember as a young player I had this dream of playing in the NBA,’ Armstrong, the longtime NBA guard and three-time NBA champion with the Bulls who is now a California-based sports agent, told The Associated Press. ‘And I vividly remember when I got to Chicago thinking, `You better be careful what you wish for, because you just might get it.´ Michael was the first person to show me what it meant to be a star … but you cannot be that star and not accept all the things that came with it.’

The strain of Jordan’s practically unprecedented level of stardom was one of the dominant themes in the latest installments of the ESPN and Netflix documentary ‘The Last Dance,’ a 10-part series that showed episodes five and six on Sunday night.

Every story about Jordan always seemed to become a big story, and Jordan felt some things were overblown such as his infamous stances on not wanting to endorse political candidates publicly or going with his father to Atlantic City for a quick gambling trip during the 1993 Eastern Conference finals.

‘We understood his pressures, he understood what we needed and that was just a special group of people who got together,’ said Armstrong, who was a Jordan teammate for the 1991, 1992 and 1993 championships. ‘I don´t wish stardom on anyone. When I hear people say, `this guy´s a star,´ I always say, `good luck.´ What it takes to be a star at that level is beyond. Always having security around, dealing with tickets, he always had to be turned on. There´s no preparation for that.

‘I always say, to this day, that the Air Jordan guy was great and God bless him. But I´ll always just remember Michael, the guy.’

Knowing that there would always be an enormous media horde at Jordan´s locker, Armstrong found himself getting dressed and out of the way quickly because otherwise his shoes would get stomped on and his space would be invaded.

If he forgot how that exercise went, he got a reminder in 2014.

Jordan was in Los Angeles and dinner with Armstrong was arranged. Armstrong got to the restaurant and found a third seat at the table, asked Jordan if a guest was coming and was told that Bryant would be joining them for the meal.

Armstrong and Bryant knew each other; they shared an agent, Arn Tellem, at one time. Bryant arrived and before long, he and Jordan were dissecting every nuance of each other´s game. In the end, they decided that Jordan would have a slight edge because his hands were bigger than Bryant´s.

‘They were playing a virtual game of 1-on-1 at dinner,’ Armstrong said. ‘I just sat there and listened to them talk about the love they had for the game. They were so sophisticated; they were talking about footwork, how they conditioned themselves, how they would box out. The detail that they had, the respect that they had for the game … I wish I could have seen them play in their prime.’

Word got out over the course of the evening that Jordan and Bryant were in the restaurant. Eventually, one got out through a back door, another through a side door, and Armstrong was left to fight off a crowd.

‘It was chaos,’ Armstrong said. ‘And they were in basketball heaven.’

Half a million sharks may be killed in effort to make Covid vaccine, wildlife experts say

Zac Efron holds hands with new girlfriend Vanessa Valladares as they step out in...

Half a million sharks may be killed in effort to make...

The job prospects in each region of Australia during coronavirus crisis

Digital reconstruction of 15th-Century monk’s face show he looked like an...