A retired couple have transformed a garden featuring little more than a muddy lawn into a stunning award winning all-year round masterpiece.

Escaping the surrounding gloom of the coronavirus, Marie and Tony Newton, both 72, have spent more than £15,000 over 38 years transforming their back garden into an all-year around paradise.

It is because of this appeal that the garden has also been nicknamed the ‘Four Seasons garden and is based in Walsall in the West Midlands.

Marie and Tony Newton, both 72, have spent 38 years and more than £15,000 transforming their back garden in Walsall, West Midlands into a beautiful oasis 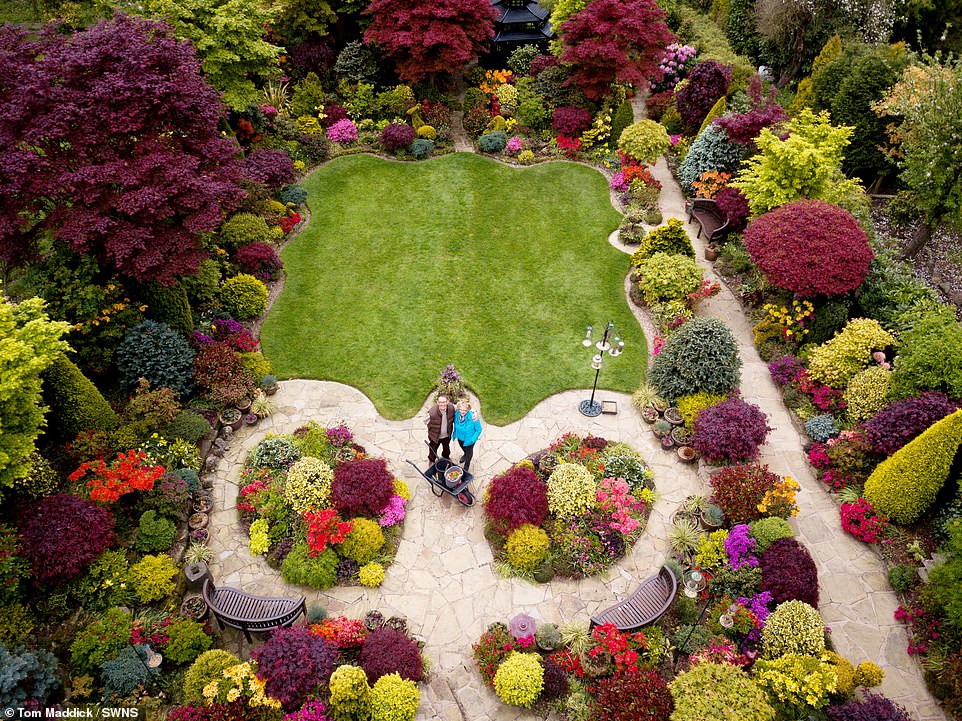 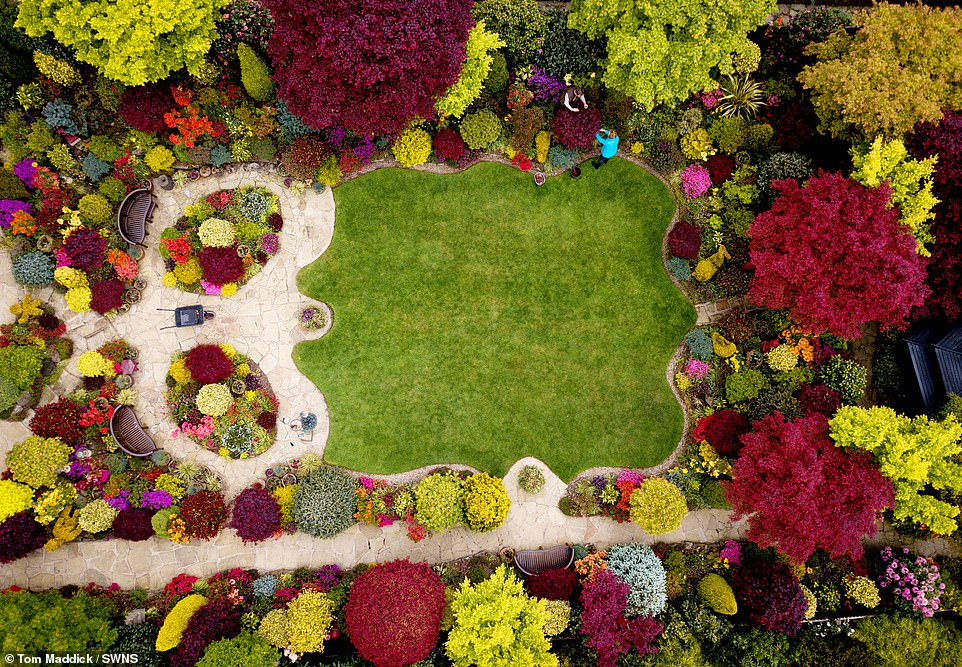 Among the accolades include Britain’s Best Garden, which is tucked away in an industrial heartland in the West Midlands 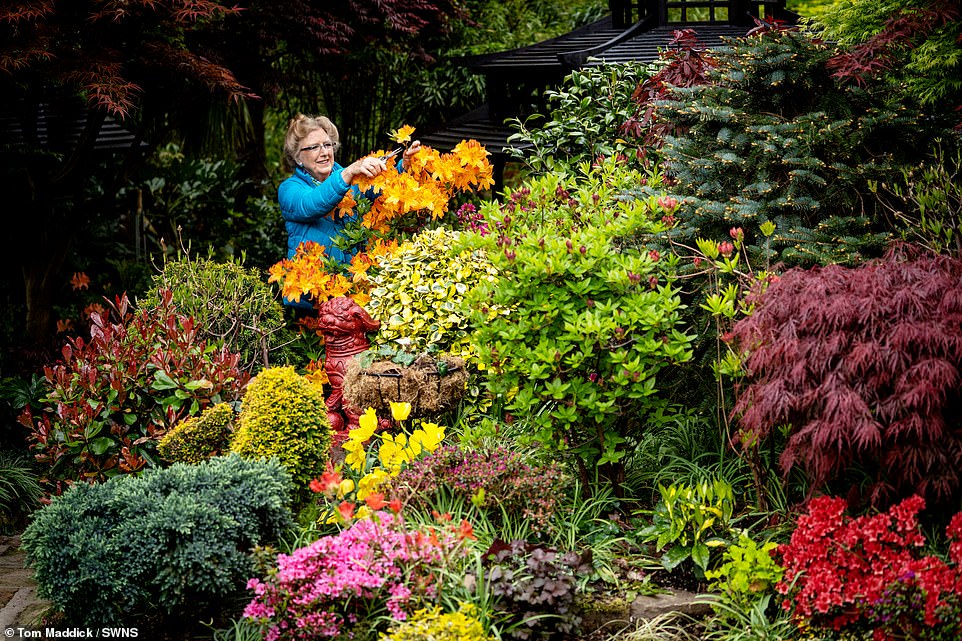 They claim to have planted more than 3,000 plants, trees and bushes, which include 450 azaleas, 120 Japanese maples and 15 juniper blue stars.

The couple, who have four grown-up children and four grandchildren, spend up to two hours a day maintaining the magnificent vibrancy on display by managing the plants and bushes.

Such is their dedication to tending to their eye-catching garden, they have won several accolades over the years that including Britain’s Best Garden.

The project first started in 1982 when Mrs Newton retired from her job as a transport planner and started tending to the garden.

She spent time teaching herself horticulture as a hobby which has helped transform the plot, which is the third of an acre, into a beautiful oasis. 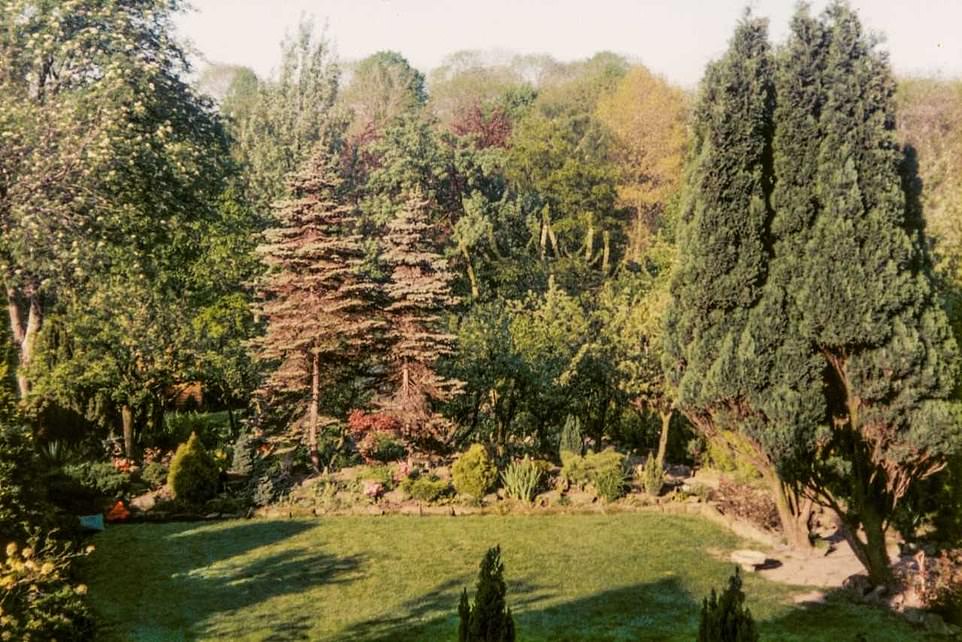 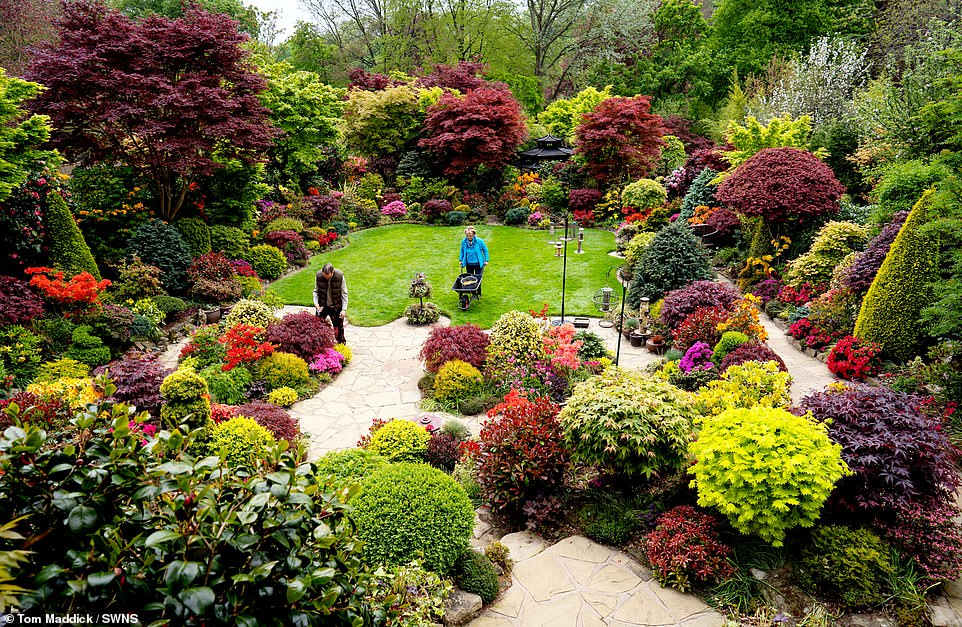 The couple claim to have planted 3,000 plants, trees and bushes in their garden which they lovingly attend to 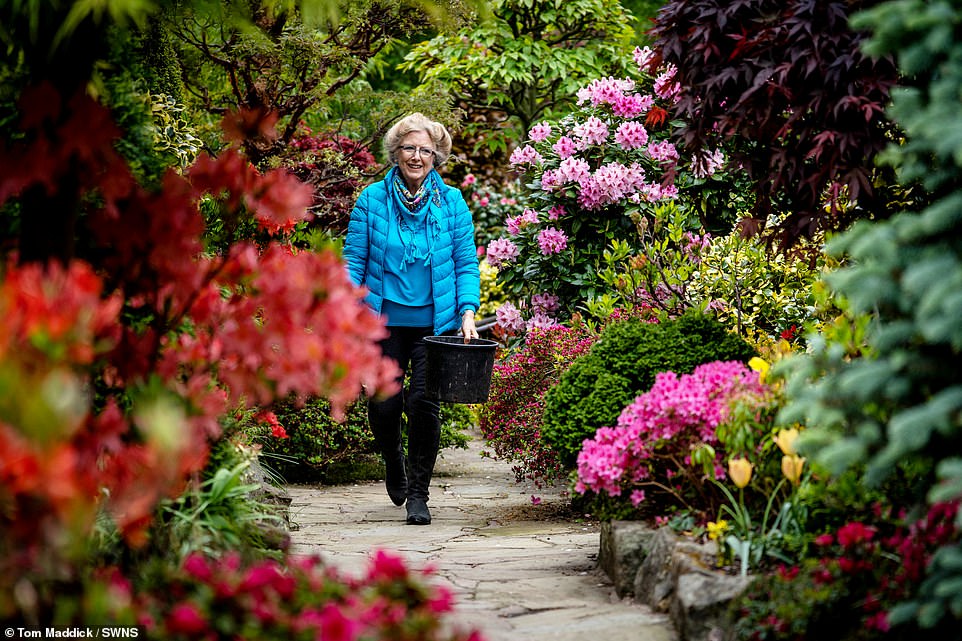 The couple over the years have spent £15,000 transforming their back garden and flowerbeds into a beautiful oasis 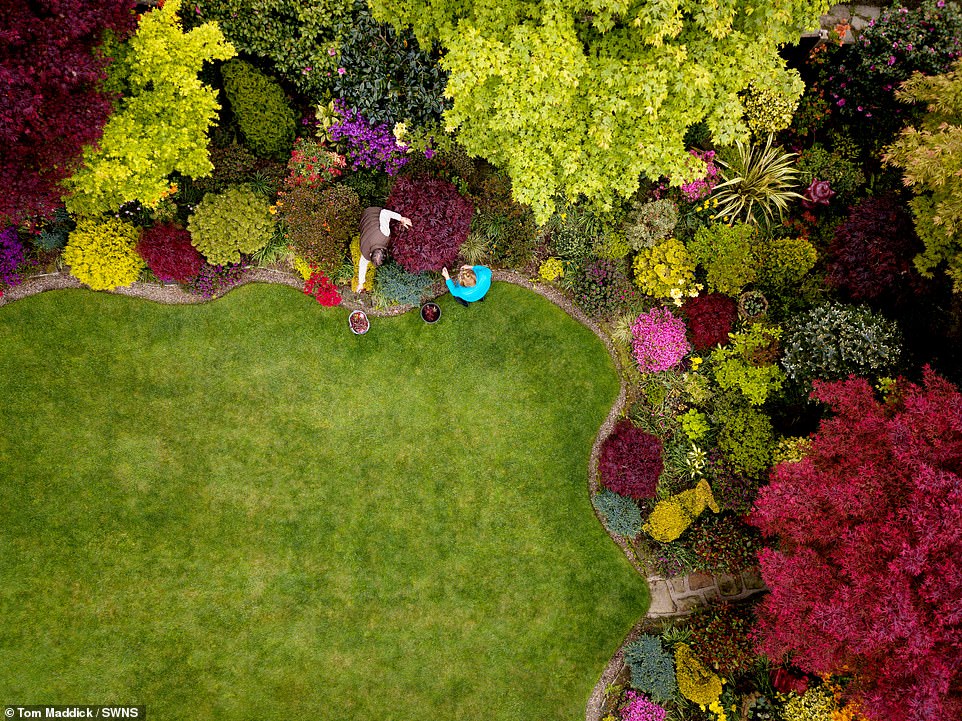 Exploding in colours, the third of an acre plot is crammed with 450 azalea, 120 Japanese maples, 15 juniper blue stars

Mrs Newton said: ‘Tony and I usually spend two hours a day in the garden but obviously since the lockdown and the fact we are over 70 means we have even more time to spare. We are sometimes in the garden all day and only come in when it gets dark.

‘We went into lockdown a little bit earlier than most people because Tony was a GP and I had been a nurse and so we could see the writing was on the wall.

‘We had an open day planned for May 22 and we knew that wasn’t going to happen. I always look forward to spring and this year has been especially rewarding. I have never seen the garden look so beautiful.

‘I’m very proud, it’s become something of an obession for both of us. Spring is my favourite time to see the garden in full bloom. It gives me an enormous sense of optimism. Seeing the pictures of the garden from above is very special. You get a real sense of what we have achieved.

‘There is always something new to try or a flower to tend to. It’s a hobby which has turned into an obsession. I think about the garden all the time.’ 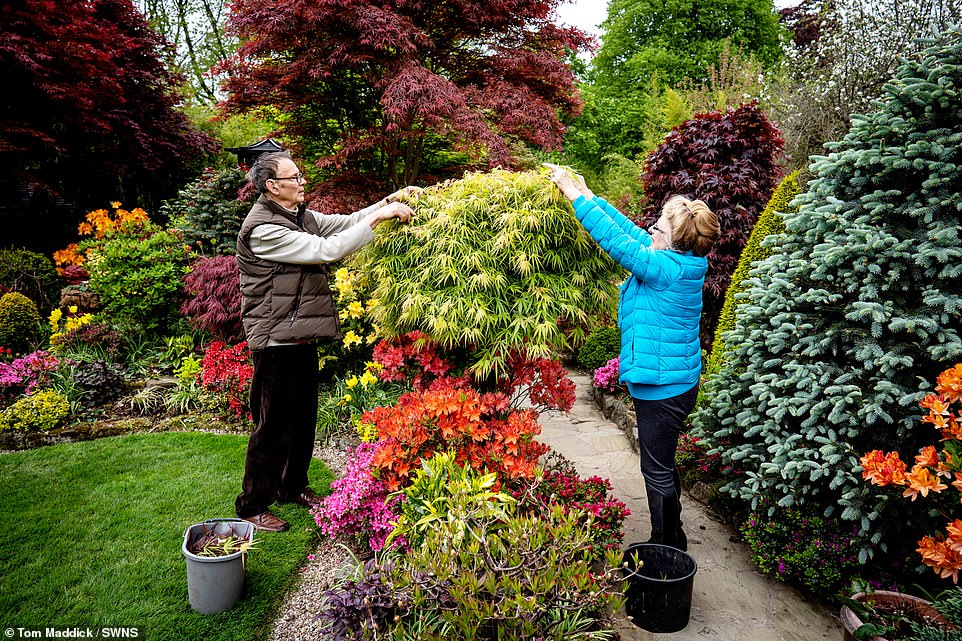 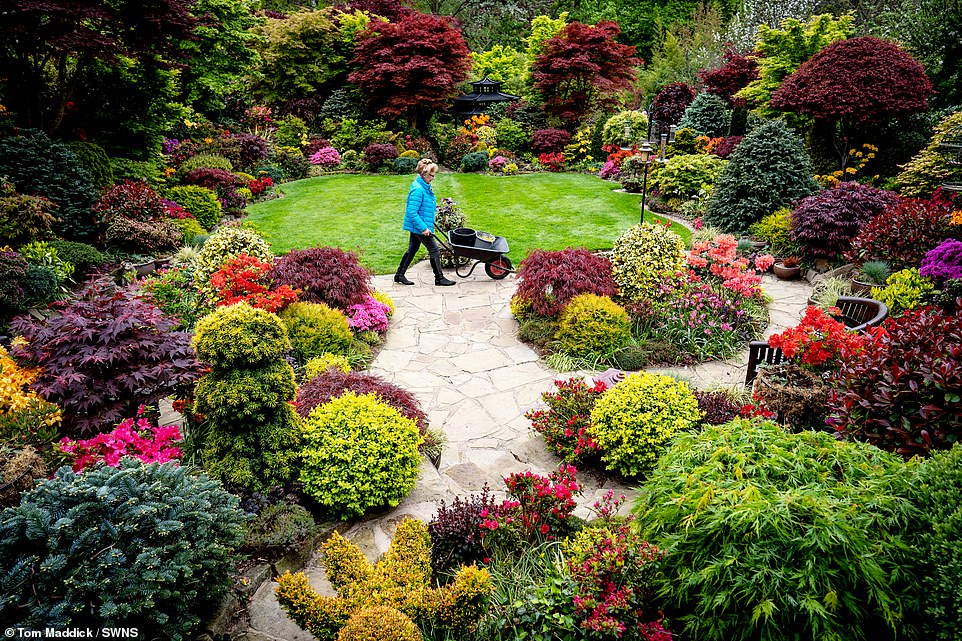 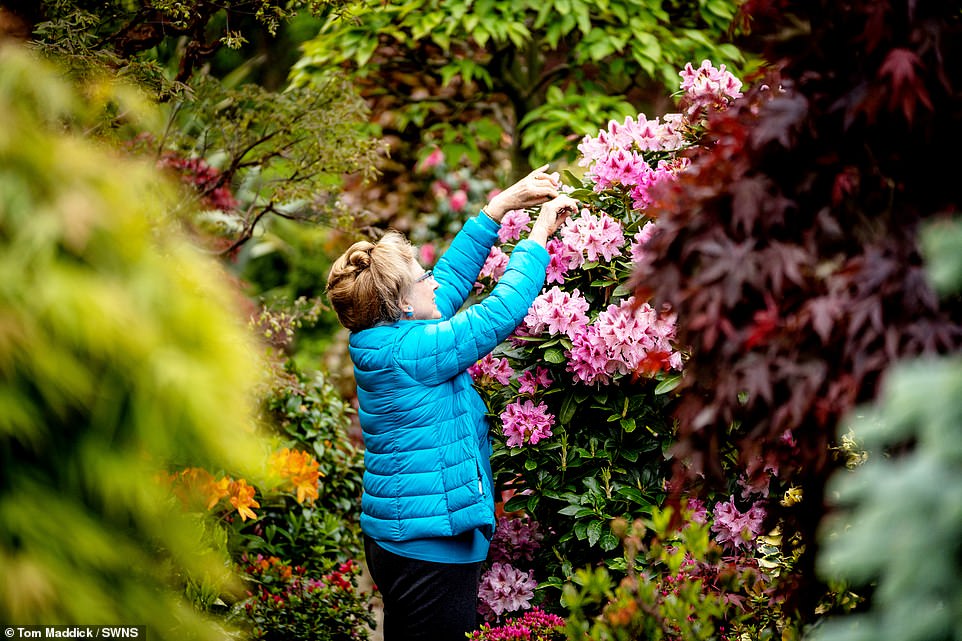 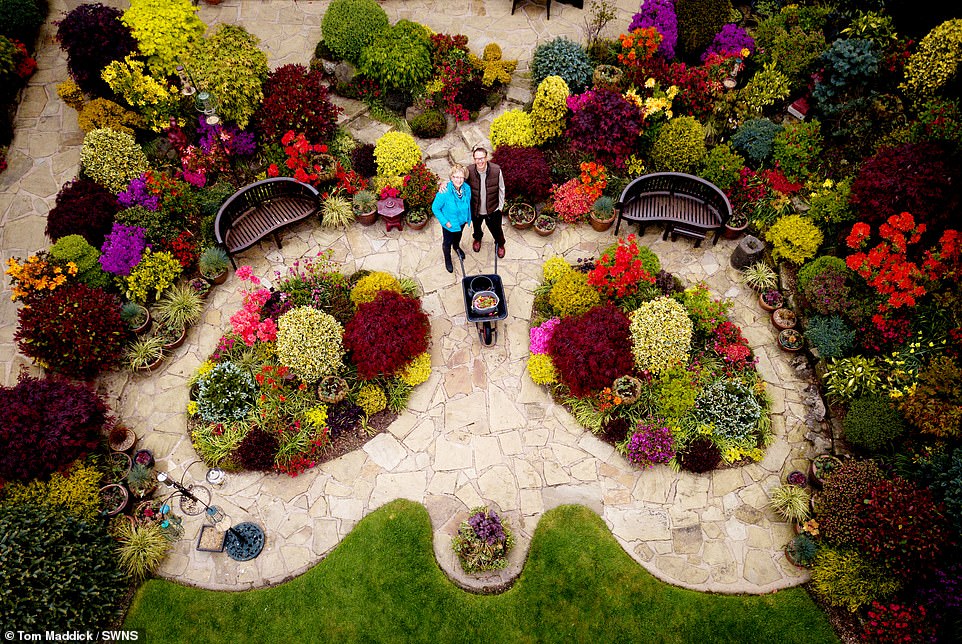 The scale of the garden is visible in an aerial shot, which also reveals the bushes and lawn in the shape of an owl

Retired GP Tony added: ‘First we made it child friendly for our kids but as the years went on we moved on to planting and growing our own flowers and plants.

‘There has been a lot of trial and error to get the garden way it is now and the last few weeks we’ve really been able to explore even more ideas.

Since lockdown, the couple have continued to plant Acers and camellias thanks to online shopping.

Amongst the sea of vibrant colours and beautiful flowers, they have even installed large bird-feeding stations onto the patio which has been playfully designed to look like the face of an owl from above.

Previously before time was ploughed into the garden, it featured a muddy lawn and broken rockery before being transformed into into the stunning scenery it now portrays.

The garden has become so popular that even unofficial tourist trails of the Black Country have started to feature it.

The couple usually open their garden up to the public in the summer but this year’s event has been postponed due to coronavirus restrictions.

JAN MOIR: If this is finding freedom, count me in Harry!

Chantel Jeffries keeps cool as she steps out to lunch in LA with her...

Trump officials interfered with CDC on COVID and accused director of...