The Lloyd’s of London insurer was one of the top risers on the FTSE 250 after placing the 57.6m shares, priced at 650p.

This was 6 per cent cheaper than its share price the day before the fundraising launched.

Cash call: Lloyd’s of London insurer Hiscox was one of the top risers on the FTSE 250 after placing the 57.6m shares, priced at 650p

Directors and senior staff spent £600,000 of their own cash to take part, with chief executive Bronek Masojada forking out almost £150,000.

Hiscox, one of the leading insurers for small businesses, warns it could take a £250million hit to cover claims from firms that cannot operate during the pandemic. This could easily rise – and so far it has scrapped its financial guidance this year and its dividend.

But the fundraising comes as it is locked in a bitter row with more than 500 business customers over unsuccessful claims relating to Covid-19.

They believe the company is wrongly refusing to pay out on business interruption claims – but it insists some of its policies do not cover the current situation.

Relief over the fundraising, which will also be used to help drive an expansion in the US, put worries about the clash to one side, with shares up 9.6 per cent, or 66.5p, to 758.8p. 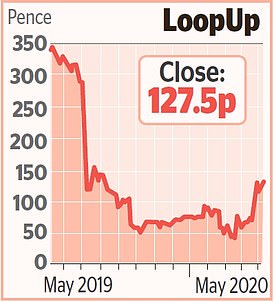 Conference call service provider LoopUp expects to smash profit and revenue forecasts this year after turnover rose 40 per cent between January and April.

The jump, compared with the same period last year, follows lockdown measures that drove vast swathes of people to work from home and host events online.

Transport group National Express was also focusing its attention on a share placing.

The coach operator expects profit could fall up to 40 per cent this year as lockdown and social distancing bring public transport almost to a standstill.

Under its worst-case scenario, revenue would not pick up until the beginning of its first quarter in June, and could be 25 per cent lower throughout its 2021 financial year.

Shares fell 3.4 per cent, or 8p, to 230p, after it raised £235million that will help tide it over in case this happens and announced it has secured debt waivers.

Waste collector Biffa, meanwhile, has furloughed 35 per cent of its staff and pulled much of its fleet from service to shore up cash.

Revenues in some divisions have halved since the pandemic took hold in Britain – but shares rose 1.7 per cent, or 3.5p, to 216p.

Traders worldwide are still cautious that recent tensions between the US and China could escalate into another tariff stand-off.

China yesterday said tariffs should not be deployed as a weapon, after President Donald Trump said he might use them to punish Beijing over its handling of the coronavirus outbreak.

Oil prices hovered around the $30 a barrel mark as lockdown measures began to ease in some countries.

Astrazeneca rose 3.7 per cent, or 318p, to 8830p, after it won US approval for its diabetes drug to reduce the risk of hospitalisation for Elsewhere, Card Factory (up 0.1 per cent, or 0.05p, to 38.25p) said online sales have soared 267 per cent since the lockdown and it has set up a new packing warehouse where workers can distance.

And BT was down 1 per cent, or 1.1p, to 114.25p, as traders hoped it will pledge to pay out a dividend when it releases results today.

Medical equipment maker Smith & Nephew almost halved in April as swathes of elective surgeries such as hip replacements were put on hold so that hospitals could manage coronavirus.

Summer is over! Temperatures are set to plummet as today’s autumn equinox brings wind and rain

Carole Baskin breaks down as she discusses the impact of Tiger...

Coleen Rooney cuts a casual figure in a hoodie and leggings...

Summer is over! Temperatures are set to plummet as today’s autumn...

TSA announces changes to airport screenings amid pandemic including self-scanning of...

Russian opposition group backed by Alexei Navalny is ‘attacked with a...