An extraordinary friendship between two war heroes from opposite sides of the world was pieced together 75 years after they were killed together in the same Lancaster Bomber thanks to the discovery of an old Bible.

The religious book belonged to Flight Sergeant Morgan Swap – a wireless operator with the New Zealand Air Force during the Second World War.

It was discovered by Alison Round, 54, from Staplehurst, Kent, whose uncle, Sergeant Edward Finch, known as Teddy, was a friend of Swap’s in the RAF’s 153 Squadron during the war. 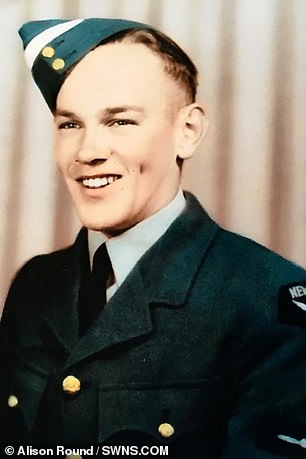 A bible belonging to New Zealand flight sergeant Morgan Swap was discovered by Alison Round, 54, from Staplehurst, Kent, whose uncle, Sergeant Edward Finch, known as Teddy, was a friend of Swap’s in the RAF’s 153 Squadron during the war 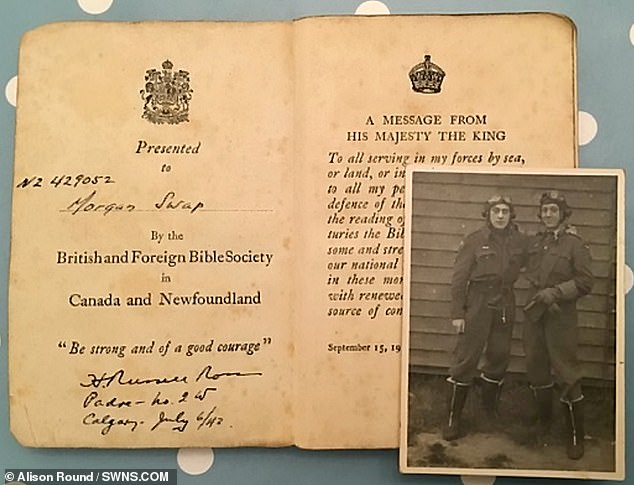 The two men died together on a bombing raid over Nuremberg just weeks before the end of the war in 1945.

Mrs Round found the Bible while she was going through her aunt Jean Finch’s possessions after her death two years ago.

Alison said: ‘I found this little blue Bible which I had never seen before. I saw on the inside it had been given to somebody called Morgan Swap when he was training in Calgary in Canada.

‘I had never heard of him before but since finding that Bible I found out more about the flight crew and what happened to my uncle than I ever thought I’d know.’

Ten Lancaster Bombers from 153 Squadron flew out to bomb Nuremberg on March 16, 1945, on a night raid but just nine made it back and all seven men on board the plane which was hit were killed.

Morgan Swap and Sgt Finch, an upper gunner on the Lancaster, were aged just 22 and 20-years-old respectively. 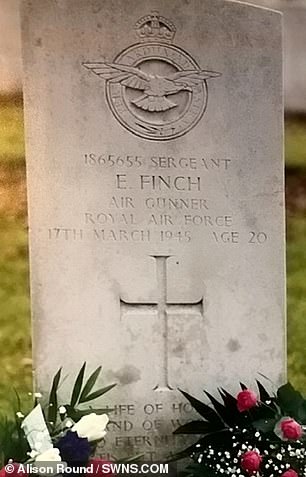 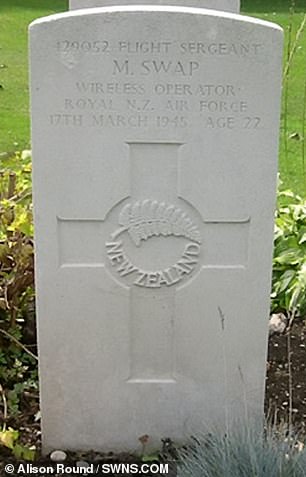 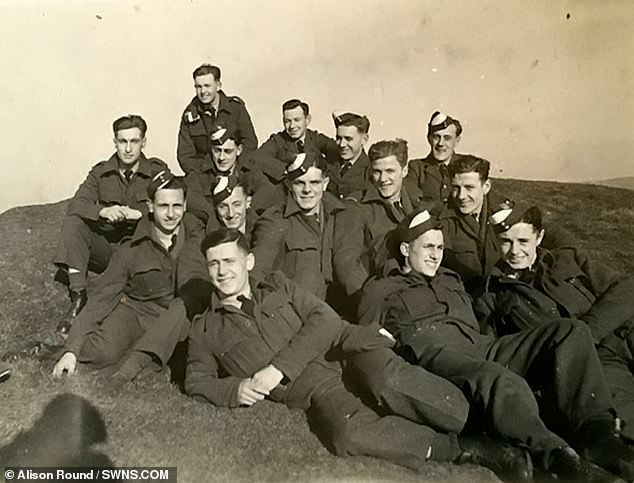 Edward Finch and Morgan Swap with other members of the 153 Squadron which died during a night raid on Nuremberg, Germany

Mrs Round said: ‘It was so tragic as it was their first operation together and they were all so young, just young boys under instructions.

‘They gave their all and they were so brave. My son is 22 now and I think there’s no way he could have done anything like this, it really puts it into perspective.’

After doing some research Sgt Finch’s niece found out that Morgan was the youngest of four brothers from a town called Matamata in New Zealand.

She and her husband Paul, 55, decided to visit the Swap family while on a trip to New Zealand for their wedding anniversary because they felt compelled to return the Bible to them.

‘The Swap family member I heard back from was called Morgan, named after his great uncle,’ she said.

‘I was quite surprised to get a reply and was so pleased when they said yes.’

The couple met up with the family for lunch and exchanged photos of their visits to the Durnbach War Cemetery in Germany where the crew were buried.

Mrs Round said: ‘That’s when we realised we’d all been there at different times throughout the years. 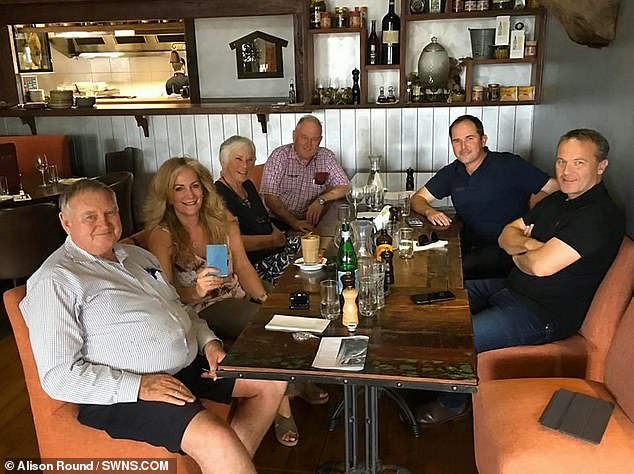 The Finch and the Swap family met up in New Zealand, including Morgan’s nephews Lewis and David Swap with Alison Round (holding bible) and great nephews Morgan and Stephen

‘It was a really special moment especially when we all realised it was 75 years to that month that the plane had been shot down. It was pretty incredible but also really emotional.

‘It seemed to be fate, it all came together at the right time. Meeting the Swap family was one of the highlights of my whole trip.

‘It was very emotional giving the Bible back. It was only a small Bible but they didn’t have much of his at all.

‘We met as strangers but said goodbye as friends, just like Teddy and Morgan.’

The Swap family said if they were ever to visit England they would stay with the couple at their home in Kent.

But one mystery of the remarkable tale which remains is why Alison’s aunt had the Bible in the first place.

‘None of us could work that one out,’ she said.

Teddy and Morgan’s colleagues in 153 Squadron continued serving to the end of the war and, when the hostilities had finished, was called upon to drop food parcels to the Dutch.

But, on their way to Holland, they were given special dispensation to fly over St Paul’s Cathedral in London on VE Day so that they could witness the joyous celebrations in the streets below.

My flat has got a leak, is mouldy and the shower doesn’t work. How can I fix this?

Building a Gimbal in Rust: An Introduction

My flat has got a leak, is mouldy and the shower...

Gullible Aussies hand over $11m in just one month to scammers