Italy will give 600,000 illegal migrants the right to stay after government said they proved essential caring for elderly and picking crops during coronavirus crisis

By Amelia Wynne For Mailonline

Italy will give 600,000 illegal migrants the right to stay in the country after the government said they proved essential by caring for the elderly and picking crops during the coronavirus crisis.

Unregistered migrants have worked in fields across the country to protect food supplies, all whilst risking being arrested if caught by police.

‘The food on our table comes from these fields. Now we must hand over those rights which have been denied to those who work in them,’ Peppe Provenzano, minister for the south of Italy, said.

The permits – which won’t give migrants the right to vote – will be valid for six months and will be renewable. They were proposed by the agricultural minister Teresa Bellanova.

Unregistered migrants have worked in fields across the country to protect food supplies, all whilst risking being arrested if caught by police. Pictured: migrants from Nigeria near Naples

The measure could be inserted into a temporary government decree with immediate effect but will be voted on in parliament after 60 days, according to The Times.

Ms Bellanova said that forcing migrants to hide could mean outbreaks of the disease go unchecked. For example one shanty town near Foggia is home to 3,000 farm pickers – but there’s no social distancing, hand sanitiser or masks.

The Pope also seemed to back the message yesterday when he condemned the ‘harsh exploitation’ of migrant farm workers in Italy.

He said: ‘May the crisis give us the opportunity to make the dignity of the person and of work the centre of our concern.’

There are also practical advantages to the new measure as 100,000 Romanian pickers who usually travel to Italy every year cannot fly over due to coronavirus travel bans.

‘Italy needs the Indians, Pakistanis and Africans who are here now to fill that gap, and making them legal helps that,’ a government source told The Times.

The measure would also legalise around 100,000 illegal migrants who work as home carers. Many lost their jobs during lockdown and their permits are dependent on employment. 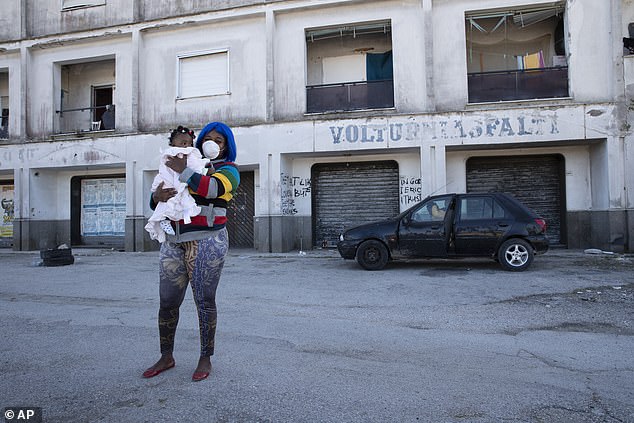 The Pope also seemed to back the message yesterday when he condemned the ‘harsh exploitation’ of migrant farm workers in Italy. Pictured: a mother and baby in a town near Naples

Many of the Africans working in fields near Foggia are illegal after losing their jobs in factories in the north and therefore their permits.

A local union official said that with permits they can rent somewhere and escape the shanty towns.

One sociologist added that if the migrants had permits it would be harder for mafias involved in farming to pay them slave wages in the fields.

The Italian farmers’ association said it opposed the proposal, preferring the UK scheme of flying in eastern European pickers to make up any shortfall.

Former Minister of the Interior Matteo Salvini – now in opposition – claimed the government was more concerned with the rights of migrants than jobless Italians.

‘It’s madness, we will try to stop it by any means, inside and outside parliament,’ he said.

Vito Crimi, the interim head of Five Star, said he opposed the plan and instead wanted to give Italians receiving unemployment benefits the chance to earn money by picking crops.

Ms Bellanova threatened to resign if the measure was blocked.

Michael Schumacher is ‘following’ his son Mick’s rise to F1 from his bed, reveals Jean Todt

Money buys more happiness now than it did in the 70s

Putting folic acid in flour in Britain will save 400 babies each year, scientists...

Mother finds maggots in Coles frankfurts in Morwell Victoria AFTER her...

Sam Newman says he ‘could not give a stuff’ that he’s...

PIERS MORGAN: COVID-19 is a threat Trump bungled but Democrats are...