She was crowned the winner of The Apprentice 2019, beating Scarlett Allen-Horton to Lord Sugar’s £250,000 investment.

And Carina Lepore revealed her eerie encounter with the business mogul one year before winning the competition as she gave her first television interview on Thursday’s episode of This Morning.

The artisan bakery owner, 30, will expand her business with the help of Amstrad magnate Alan, 72, but explained she crossed paths with him when she was working at her Herne Hill business.

You’re hired: The Apprentice winner Carina Lepore revealed her eerie encounter with Lord Sugar one year before winning the competition as she gave her first television interview on Thursday’s episode of This Morning 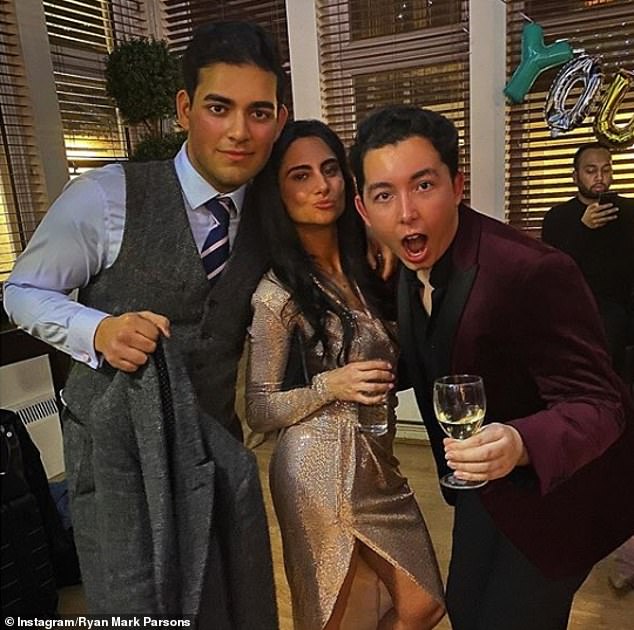 What drama? Despite taking a swipe at her fame-hungry fellow candidates earlier in the day, Carina looked happy to reunite with Dean Ahmad and Ryan-Mark Parsons at the wrap party

She said: ‘Last August it was a bit of a quiet day and I was sitting there and I noticed AMS One driving past, his entourage of cars.

‘I quickly tweeted “oh Lord Sugar drove past my shop, how many sugars do you take?”- trying to make it like a joke – and since there there’s been something in my mind thinking this means more.’

‘I’ve always looked up to Lord Sugar as a businessman. I think we’re gonna have a great working relationship, I’m a grafter that’s definitely what I am I never shy away from hard work I have hardworking I want to be successful.’

The interview comes hours after the wild The Apprentice after party, which saw Carina reunite with her warring business rivals, and following an explosive interview with MailOnline in which she questioned some of their motivations for competing. 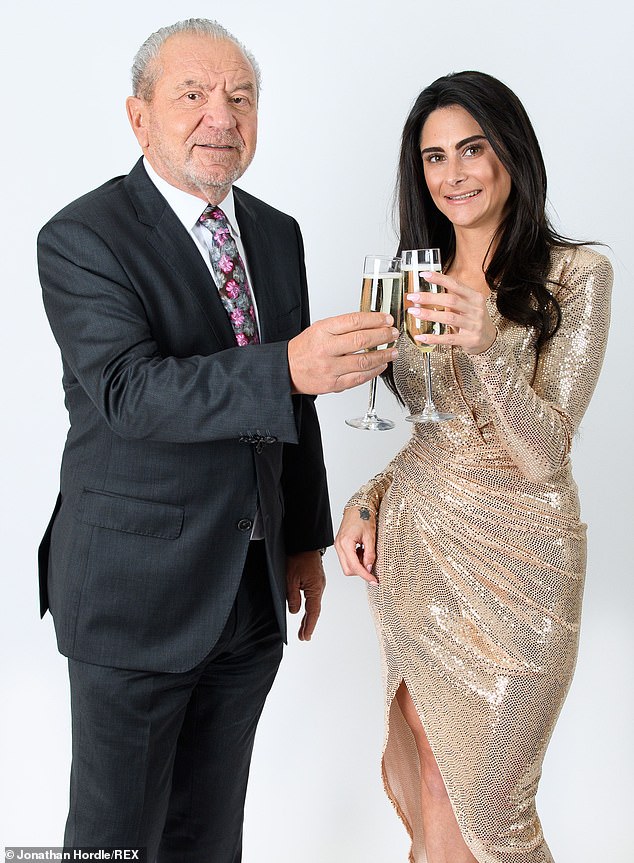 Business partners: The artisan bakery owner, 30, will expand her business with the help of Amstrad magnate Alan, 72, but explained she crossed paths with him when she was working at her Herne Hill business 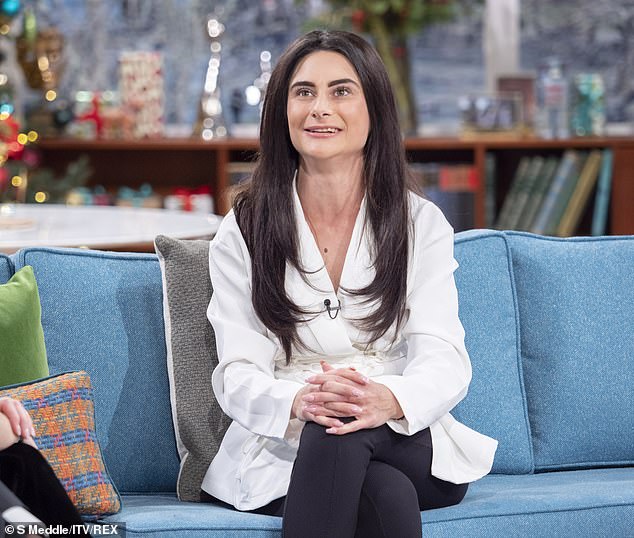 Premonition: She said: ‘Last August it was a bit of a quiet day and I was sitting there and I noticed AMS One driving past, his entourage of cars. ‘I quickly tweeted “oh Lord Sugar drove past my shop’ 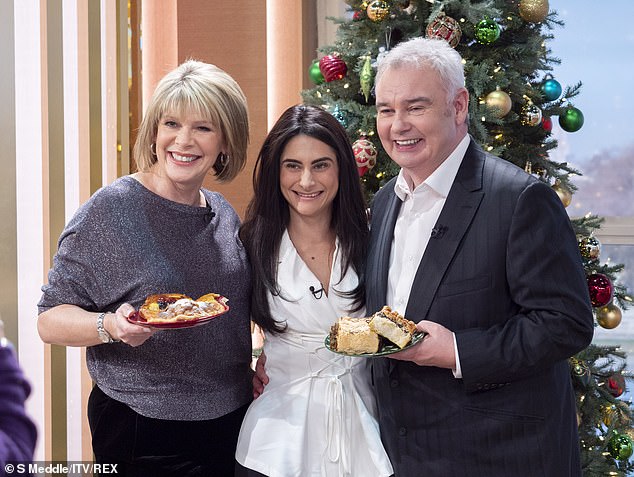 Carina- who was jokingly dubbed ‘the baker who’s not a baker’ during her time on the show, said:’I was there for business, I wasn’t on there for a TV career…

‘My focus was always on winning the competition. I never pulled focus. I went in to win it and I don’t regret anything. I stand by all my decisions.

‘All of us have an unbreakable bond because we have been through this crazy experience together.’

Despite the scathing comments it was all smiles as Carina posed up with fellow candidates Dean Ahmad, 20, Ryan-Mark Parsons, 19, Lewis Ellis, 28, Thomas Skinner, 28, Jemelin Artigas, 28 and Pamela Laird, 29.

Carina looked sensational in a glittering gold dress with a thigh split as she posed with supportive friends Jemelin and Pamela who put on a glamorous display. 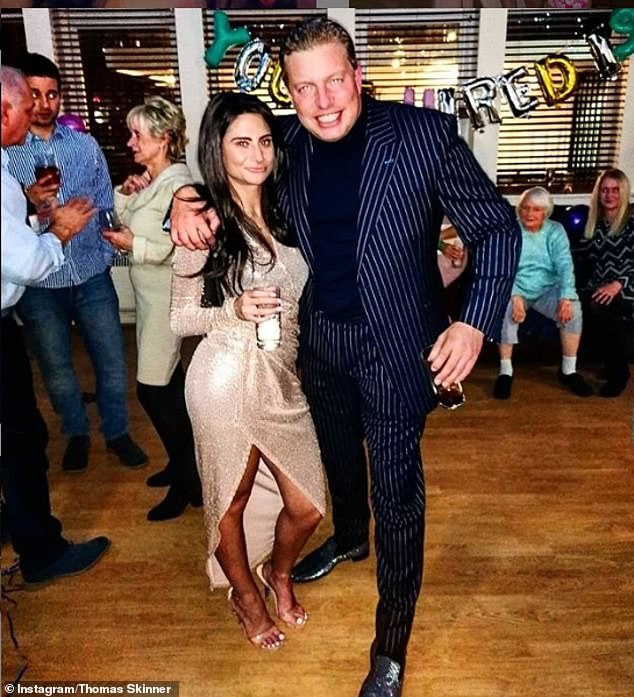 Smile: Carina posed up with BFF Thomas Skinner at the wrap party 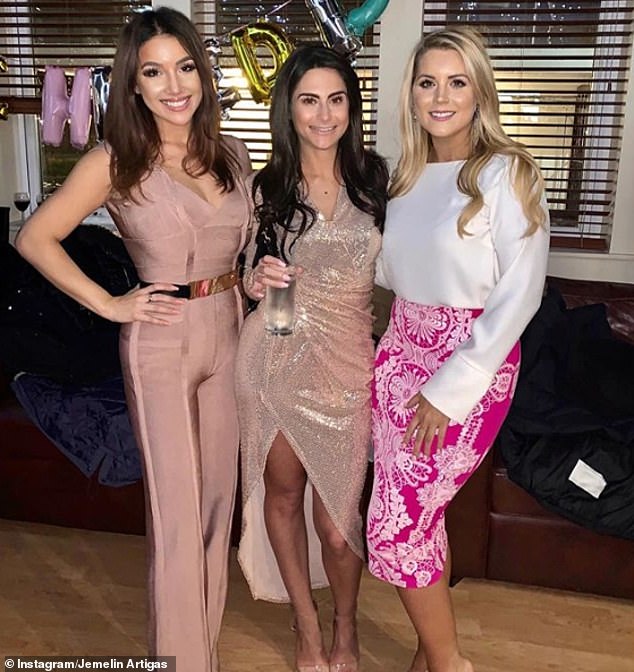 Glamour: The winner looked sensational as she posed with Jemelin Artigas and Pamela Laird

Carina, took home the title in the all-female final after wowing the boardroom with her presentation, advert and brand concept for Lepore’s Bakery.

Her comments about fame hungry candidates come after axed candidate Dean Ahmad laid into controversial contestant Lottie Lion, saying she was on the show for ‘other reasons.’

Speaking to MailOnline last week, he branded the 19-year-old librarian a ‘bit of a nightmare’ and added: ‘I think the viewers can make their own judgement on her.

‘You’ve got four out of five candidates with business acumen but I think it’s quite obvious that some people are on the show for other reasons potentially.’

Fellow teen candidate Ryan-Mark Parsons, 19, was also publicly accused on Twitter of ‘just going on the telly to be famous’ by 2014 winner Mark Wright. 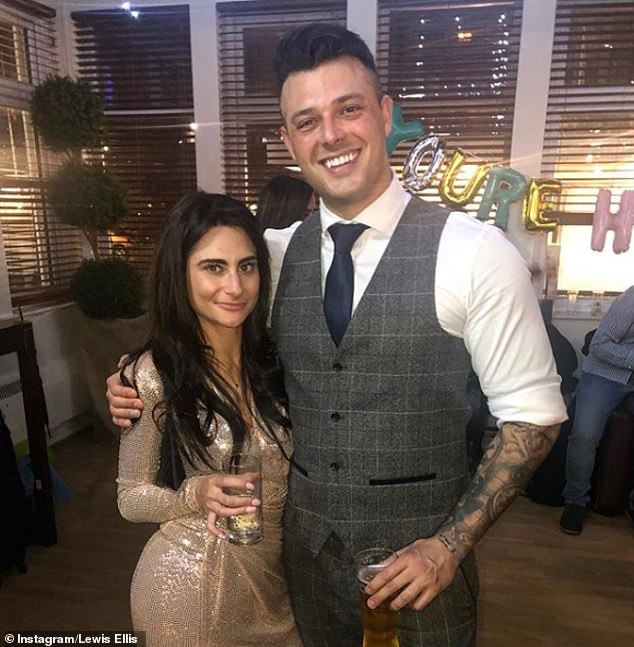 Winner: Carina joined Lewis Ellis for a fun snap at the raucous bash 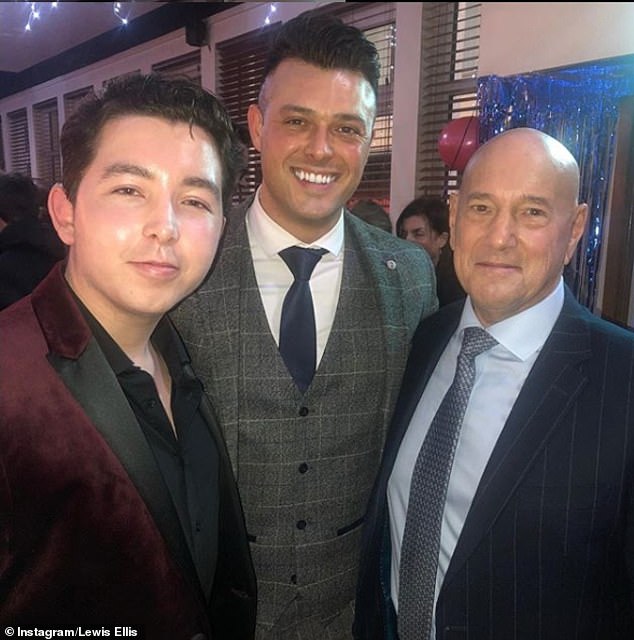 Wow: Claude Littner cracked a rare smile as he posed with Lewis and Ryan-Mark

Although she wouldn’t be drawn on who  she believed was on the show to pursue a TV career, Carina said: ‘The only common ground I had with everyone was their desire to progress in the world of business. That was what we had in common.

‘As far as I’m concerned, Lottie was there to start her business, that’s all I want to say on the matter.’

The 15th series of the show has been rocked by scandal off-screen.

Lottie Lion was forced to deny accusations of racism, bullying and homophobia made against her after it was reported she told fellow contestant Lubna Farhan, 33, to ‘Shut up, Gandhi’ in a private WhatsApp group conversation, in an incident after filming on the show had ended.

The BBC later described the comments Lottie had made as being ‘wholly unacceptable’. 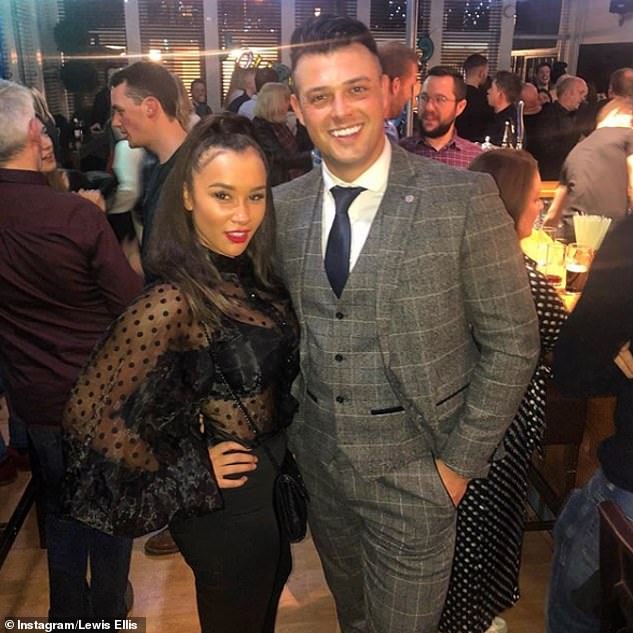 Champion: Lewis posed up with 2018 winner Sian Gabbidon at the party 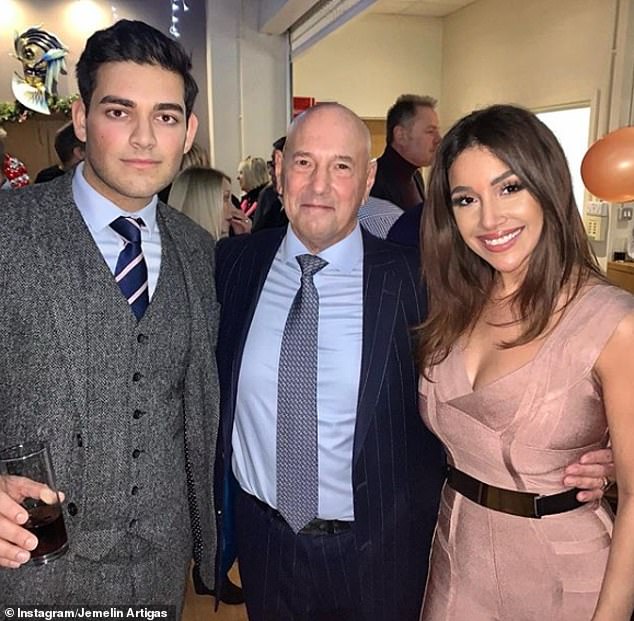 Party: Dean Ahmad and Jemelin were all smiles as they joined Claude for a fun snap 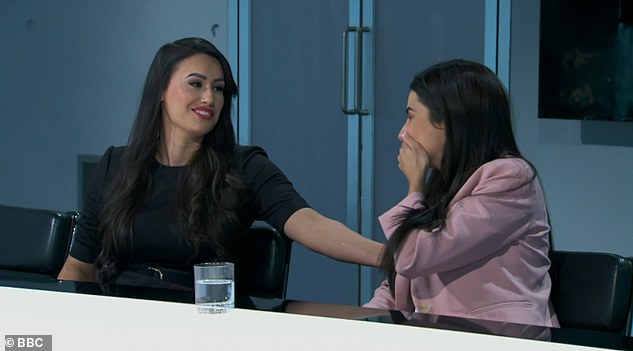 Staying out of it: Not seen at the bash was runner-up Scarlett Allen-Horton

Lottie later said she felt there has been ‘a huge lack of support’ from the BBC. She also claimed she was dropped from the after-show process after giving an interview to a national newspaper in which she criticised the BBC.

Lewis Ellis, 28, also slammed the hit BBC show for not looking out for the welfare of its contestants.

The Digital Marketing Project Manager claimed that living in the contestant’s mansion was ‘like a prison’ and even says his hair fell out due to stress.

The Apprentice spokesperson hit back with: ‘ ‘There are strict rules about contact with the outside world to avoid cheating and everyone has to be treated in the same way as it is a competition.

‘This is made clear to the candidates before they agree to take part. Additional contact with home is facilitated for candidates with children. 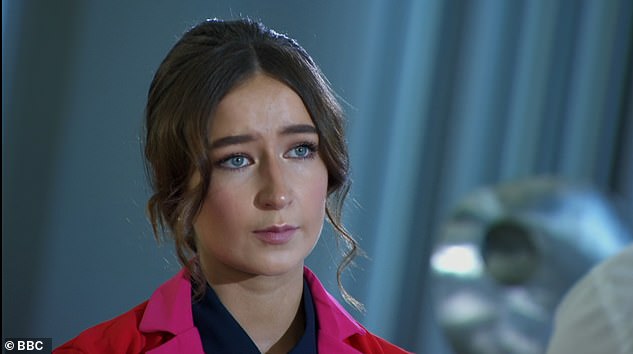 You’re fired: This year’s series has been rocked by drama off-screen with Lottie Lion banned from appearing on You’re Fired and You’re Hired after it was reported she told fellow contestant Lubna Farhan, 33, to ‘Shut up, Gandhi’ in a private WhatsApp group conversation

Married At First Sight: Bryce reveals he slept with Melissa many times

Morrison’s security guard holds umbrella over dog in the rain

Married At First Sight: Bryce reveals he slept with Melissa many...

Twice as many first-time buyers splashed more than £1million on their...