High-profile business tycoon is blackmailed by boyfriend of his transgender son over sex videos, court hears

A high-profile businessman was blackmailed over sex videos involving his transgender son, a court heard.

Jack Gibson, 27, threatened to release videos and images of the sexual encounter to the media unless the tycoon paid him, it is alleged.

Westminster Magistrates’ Court was told the father was ‘a businessman of public standing’ while his son was ‘somebody who struggles with their gender identity and sexuality’.

Prosecutor Julie Idowu said both were ‘well-known public figures’, who cannot be named for legal reasons.

Jack Gibson, 27, is accused of blackmailing both.

He was arrested at the Sidney Hotel near Victoria Station in central London on April 25 and caught with cocaine and cannabis, the court heard.

Ms Idowu said: ‘Complainant number two is a businessman of public standing. The other complainant is somebody who struggles with their gender identity and sexuality.’

She said Gibson had ‘videos and pictures’ of the son ‘he had taken throughout the night in his flat after they had intercourse on two separate occasions.

‘The defendant had been in talks with the media to release the videos and pictures which seemed to be concerning matters that occurred in private.

‘He was found at a hotel when he was arrested.’ 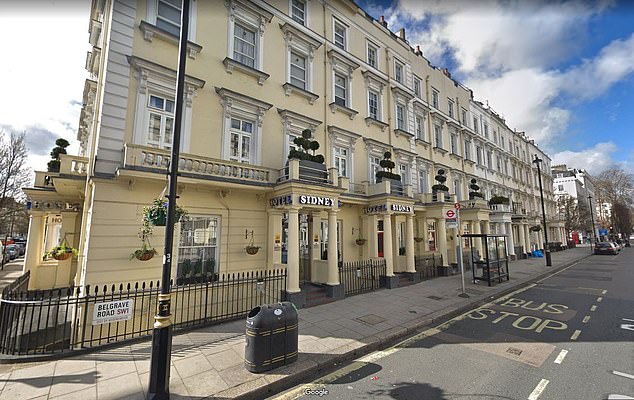 Jack Gibson, 27, is accused of blackmailing the father and son. He was arrested at the Sidney Hotel near Victoria Station in central London (pictured) on April 25, the court heard

District Judge Samuel Goozee said he needed to know the identities of the alleged blackmail victims but Ms Idowu said they had not even been disclosed to her by the CPS.

The judge added: ‘I’ve made a press restriction order prohibiting publication of the two complainants in this case.’

Gibson declined to appear in court and was remanded in custody ahead of a preliminary hearing at Southwark Crown Court on May 26.

He faces two counts of blackmail and two of possession of class A and B drugs.

My six steps to keep smiling in the face of a second wave: Max Pemberton

Courteney Cox confirms she is joining the cast of Scream 5

My six steps to keep smiling in the face of a...

‘An ab is appearing!’ Lily Allen shows off her trim waist...