Working men are significantly more likely to die of COVID-19 than women of the same age, according to statistics.

Those who work as security guards have one of the highest risks of death if they catch the coronavirus, along with social care workers, drivers and chefs.

The Office for National Statistics today published data showing that Britons working in ‘low-skilled’, low-paid jobs are the ones most likely to die of coronavirus.

Those workers are also likely to have been working throughout the crisis or to be the first back to work as Britain gets back to its feet this week.

While people below retirement age are significantly less likely to die if they catch the pneumonia-causing disease, all are not equal.

The ONS found that people working in what it calls ‘elementary’ jobs, such as cleaners and construction workers, had the highest risk of death.

Both men and women working as carers had a ‘significantly’ higher than average risk of dying from the disease, even though doctors and nurses did not.

And jobs in which people were put at particularly high risk included taxi drivers, chaffeurs, bus and coach drivers, chefs, and shop assistants.

The statisticians admitted that their analysis could not prove that it was people’s jobs that put them at risk because they only accounted for people’s ages, not for other factors such as where they lived, who they lived with, how well off they were or their race.

However, GMB, a trade union for more than half-a-million people, said the stats were ‘horrifying’ and one expert added it is not only health workers at risk.

Data released by the Office for National Statistics shows that, generally, the risk of dying of the coronavirus increases as jobs become lower paid

John Phillips, acting general secretary at GMB, said: ‘These figures are horrifying, and they were drawn up before the chaos of last night’s announcement.

‘If you are low paid and working through the COVID19 crisis you are more likely to die – that’s how stark these figures are.

‘Ministers must pause any return to work until proper guidelines, advice and enforcement are in place to keep people safe.’

While a lot of emphasis has been put on medical workers and carers being put at risk by the coronavirus, experts say this shows other occupations are high-risk, too.

Regular close contact with other people, such as in cars or in the hospitality sectors where they work, may be increasing people’s risk of becoming seriously ill.

Professor Neil Pearce, Professor of Epidemiology and Biostatistics at the London School of Hygiene & Tropical Medicine, said: ‘This important report confirms that in the working age population COVID-19 is largely an occupational disease.’

‘The findings are striking,’ he added added, ‘and emphasise that we need to look beyond health and social care, and that there is a broad range of occupations which may be at risk from COVID-19.

‘These are many of the same occupations that are now being urged to return to work, in some instances without proper safety measures and PPE being in place.’

Prime Minister Boris Johnson’s call last night for people to return to work if they can, but not to use public transport, has sparked anger because it is likely to affect poorer workers disproportionately. 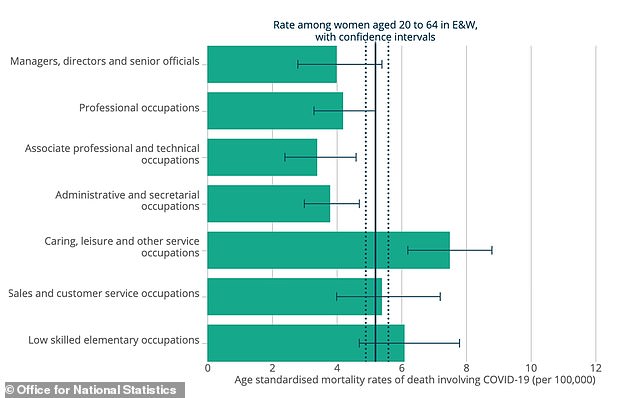 Mr Johnson told people to drive, cycle or walk to work if they could and to avoid public transport.

Decisions like this may be easier for people with more money, critics say, and London mayor Sadiq Khan has come under fire for refusing to run more trains so people can social distance more effectively.

The Mayor of London said in a statement that the ‘lockdown hasn’t been lifted’ and that you must not use transport for ‘unnecessary journeys’.

Thousands of commuters have heeded Mr Johnson’s advice and headed back out on the road, or onto crowded tubes that still have no social distancing measures in place.

Commuters have already reported large traffic jams in major roads such as the M25, and in London, people have been pictured crammed onto tubes with no social distancing in place at all.

The Rail, Maritime and Transport union (RMT) advised its members not to work if they felt unsafe.

It said the Government was shifting away from the stay at home message, which would unleash a surge in passengers breaching social- distancing measures with ‘potentially lethal consequences’ for staff and the public.

The statement said: ‘To be clear no agreement has been made to change any working practices or social distancing arrangement…

‘Therefore if two metre social distancing cannot be maintained we consider it to be unsafe and members have the legal right to use the worksafe process.’

The ONS said its data was not perfect and couldn’t be used as proof because it didn’t take into account people’s lives outside of their jobs.

It said: ‘The results of the analysis do not prove conclusively that the observed rates of death involving COVID-19 are necessarily caused by differences in occupational exposure.

‘In the analysis we adjusted for age, but not for other factors such as ethnic group, place of residence or deprivation.

‘Additionally, the analysis only considers the occupation of the deceased. We have not taken account of the occupations of others in the household, which could increase exposure to other members of the same household.’

RICHARD LITTLEJOHN: We’re all going to hell on a Segway – One Step Beyond!

Alessandra Ambrosio parades her tanned legs in Daisy Dukes as she treats her son...

Achileas of Greece celebrates in black tie on his 20th birthday

Strictly stars face being DISQUALIFIED if they test positive for coronavirus...