By Max Winters For Mailonline

A group of ‘around 150 to 200’ people appeared to snub social distancing rules on Tuesday to attend a noisy funeral procession in Chelsea.

Despite the Government’s light easing of lockdown restrictions this week, social distancing rules are strictly still in place with the coronavirus pandemic still causing havoc. Coronavirus has killed more than 30,000 people in the UK.

But it seems some people are still willing to flout the social distancing rules after a large gathering met in Ixworth Place in Chelsea. It is claimed they refused to keep their distance and did not wearing any protective equipment, such as masks.

A witness told MailOnline: ‘I work in an office and we are going in because we sell things online and we need to get the orders out. We went outside at 12pm and there was just this huge group of people, like 150 to 200 people all wearing black with a hearse.

‘They were playing music and had these purple balloons which they let off into the sky. They were there probably about half an hour.

‘But I just went downstairs for a cigarette and they’ve all come back. They’re having a kind of party on the street.

‘They’ve put chairs outside this house and they’ve pulled up their Boris bikes and are chatting amongst each other.

‘No social distancing whatsoever, no one is wearing masks and they’re having a kind of street party.’

A statement from the Metropolitan Police read: ‘Police were called at 15:08hrs on Tuesday, 12 May to Ixworth Place, SW3.

‘It was reported that 20 people were not social distancing following a funeral.

‘Officers attended, no offences disclosed and the group dispersed’. 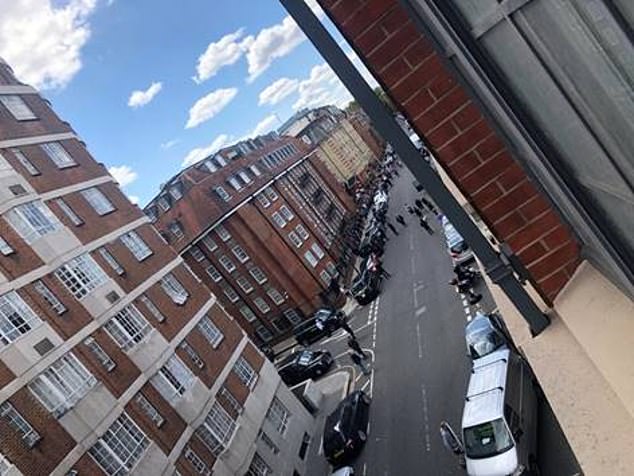 Police are still closely monitoring the size of gatherings in outdoor places with fines for people who flout lockdown rules in England to increase to a minimum of £100 per offence from tomorrow.

A 50-page strategy document issued by the government on Monday stated that the new fines are hoped to control the ‘increased risk’ of rule-breakers as schools and businesses go back to work over the coming weeks and months.

From tomorrow onward Britons are permitted to meet with one person from outside their household in an outdoor setting, as long as they maintain social distancing.

Myleene Klass gets stuck into Dancing On Ice rehearsals

Air hostess, 32, says she shocks passengers due to her uncanny similarity to Meghan Markle

Scott Morrison plans to get the Australian economy ‘out of ICU’

Myleene Klass gets stuck into Dancing On Ice rehearsals