Diabetes increases risk of early death: New report shows Britons with the Type 2 form of the disease are 50 per cent more likely to pass away prematurely

By Ben Spencer Medical Correspondent For The Daily Mail

Britons with the type 2 form – which is linked to lifestyle and obesity – are 50 per cent more likely to die prematurely than those without the disease.

And for those with the type 1 form – an incurable autoimmune disease – the risk goes up 148 per cent.

The figures, revealed by the charity Diabetes UK, unveil the scale of a health crisis which is unfolding across Britain.

The number of people registered with diabetes has nearly doubled in 15 years.

But experts believe the true figure is more than 4.8 million, with nearly a million people living with diabetes without a diagnosis.

The National Diabetes Audit figures show those with type 2 diabetes are two and a half times more likely to experience heart failure, compared to those without the condition.

Being overweight is the greatest risk factor for developing the type 2 form – which makes up 90 per cent of diabetes cases – while age, family history and ethnicity can also play a part.

Levels of obesity are soaring. A third of children and two thirds of adults in Britain are now overweight, making it the third biggest obesity problem in Europe. 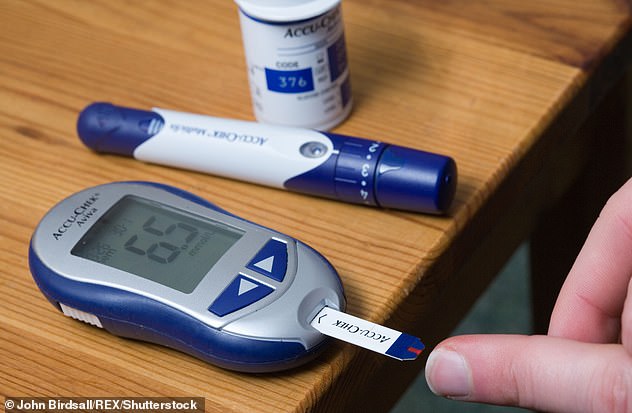 The figures, revealed by the charity Diabetes UK, unveil the scale of a health crisis which is unfolding across Britain (stock image)

Hospital admissions due to obesity soared by almost 100,000 last year – a 15 per cent rise – and experts say fat patients are putting an intolerable strain on the NHS.

But Diabetes UK said government action to tackle the problem has stalled.

Chief executive Chris Askew said: ‘Type 2 diabetes is an urgent public health crisis, and solving it depends on decisive action that’s led by government, supported by industry and delivered across our society.

‘More than half of all cases of type 2 diabetes – and the accompanying risk of developing devastating complications – could be prevented or delayed by supporting people to make healthier choices.

‘This includes mandating industry to make food and drinks healthier and addressing the marketing and promotion of unhealthy foods.’

The audit showed that of a sample of 2.6 million people with diabetes living in England and Wales, 94,520 of them died in 2017.

Taking each person’s age into account, if none had diabetes, only 61,814 would have been expected to die – meaning diabetes raised the death risk 53 per cent.

NHS national clinical director for obesity and diabetes, Professor Jonathan Valabhji, said: ‘While diabetes is a dangerous public health threat that can shorten people’s lives, as well as costing the NHS billions every year, thanks to better NHS treatment, the outlook for people with both type 1 and type 2 diabetes has improved considerably over the last 20 years.

‘As part of the NHS long-term plan we are also now delivering the world’s largest type 2 diabetes prevention programme in order to prevent people from developing type 2 diabetes in the first place.’

One of England’s earliest Victorian baths are discovered in Bath