The coronavirus killed more people than cancer and dementia combined in April, statistics have revealed.

And, between March 2 and May 1, 12,526 care home residents died after catching the virus – more than a quarter of all people in homes during that period.

Almost 230,000 people have been officially diagnosed with the viral disease but the true scale of Britain’s outbreak is considerably larger, with government officials suggesting around 2.6million are likely to have caught it.

How deadly the virus really is remains unknown but it is killing huge numbers of people with other health problems such as diabetes, high blood pressure and dementia.

Office for National Statistics data today showed that COVID-19 has become the leading cause of death in England and Wales, killing people at almost triple the rate of dementia and Alzheimer’s disease.

The virus, which causes pneumonia, has killed more people in just two months than long-term lung diseases did in the entire of 2018, the ONS said. 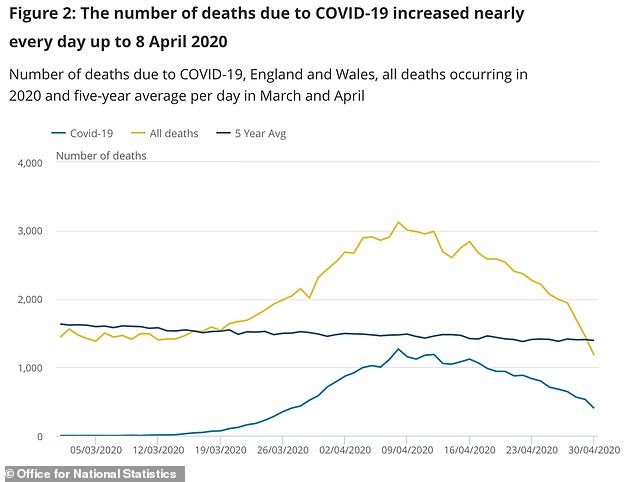 Coronavirus deaths have pushed up the total number of people dying so far this year considerably higher than average. Two weeks in the middle of April were the deadliest weeks on record for England and Wales, with more than 40,000 deaths of all causes 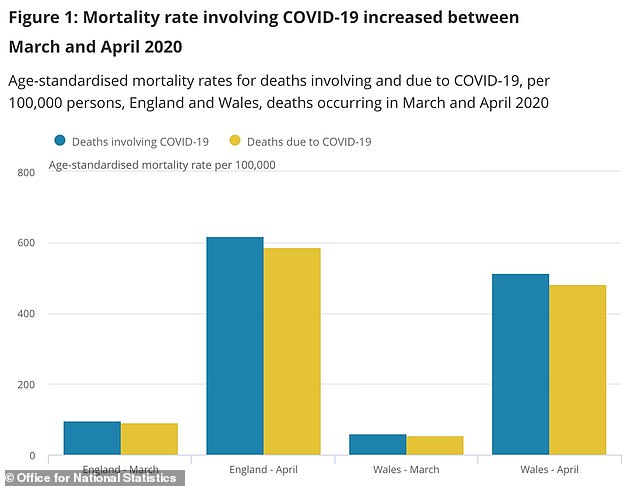 The ONS’s data shows that 33,841 people died with the coronavirus between March 1 and April 30 in England and Wales.

Of those patients, 95 per cent (32,143) were killed directly by the virus, it said, which was on par with the total number of deaths from long-term lung disease – such as chronic obstructive pulmonary disease (COPD) – in the whole of 2018.

In a normal year, dementia and Alzheimer’s disease are the leading cause of death in England and Wales, accounting for around one in every seven fatalities (12.8 per cent).

Dementia killed 69,748 people in 2018, according to past statistics from the ONS, and COVID-19 has killed almost half as many people in just two months.

One in five of the COVID-19 victims in March and April (6,887) also had dementia or Alzheimer’s disease, showing how the virus is most devastating for the elderly and vulnerable.

Today’s statistics revealed that only one in 10 coronavirus victims had been healthy before they caught the virus – 90.4 per cent of them had other health problems.

It was revealed yesterday that around a quarter of all people who have died from COVID-19 in the UK had been diabetic.

The ONS confirmed that the peak of deaths caused by the virus was on April 8, when 1,267 people died in a single day. This was almost as many people as died of any cause on March 1, before the first COVID-19 death was recorded.

Once the first death from the coronavirus had happened, the toll rose sharply until April 8.

By that time, the number of people dying each day was more than double the five-year average, with 3,122 fatalities recorded on the worst day of the month, compared to an average of 1,474 for the same day in a normal year. 1,267 of those involved COVID-19.

Well that’s not your usual neighbour! HUGE kangaroos are spotted in Canberra

42% of voters say Donald Trump will go down as ‘one of the worst presidents’ in U.S. history

SMALL CAP SHARE IDEAS: Is Quixant out of the woods?

Could a cat allergy save you from a severe case of Covid-19?

Miley Cyrus leaves little to imagination as she goes braless in...

Well that’s not your usual neighbour! HUGE kangaroos are spotted in...