A man has been jailed for eight years after dousing his childhood friend in half a litre of sulphuric acid in an act of ‘vengeance’.

Ibrahim Khan, 22, from Slough, had fallen out with Amar Hussain, who he had known since he was only a young boy, a judge was told.

After two stand-up rows, Khan had plotted to take revenge on the 27-year-old victim, who was playing computer games at a friend’s home, by filling up a Coca Cola bottle with the highest-strength sulphuric acid available and throwing the contents into Mr Hussain’s face.

Judge Paul Dugdale, sentencing Khan, said: ‘You grew up with Amar Hussain, you would have known each other when you were young boys.

Ibrahim Khan, 22, (pictured) from Slough, had fallen out with Amar Hussain, who he had known since he was only a young boy, a judge was told

‘However, what you did that day, on January 26, was absolutely terrible. It was a truly terrible act for anyone to commit.’

The court heard how Khan, of Hatton Avenue in Slough, Berkshire, had an argument with Mr Hussain two days before the acid attack which culminated in the defendant, who was drunk, hurling a brick through a window and the police being called.

Charles Ward-Jackson, prosecuting at Reading Crown Court, told how Khan had called Mr Hussain on January 25 and threatened him, saying: ‘You got my house raided by the police. I have got a sword. I am going to come and chop you up.’

Mr Ward-Jackson said: ‘The day of this incident, January 26 at 7.15pm, the victim was visiting a friend, Thomas Allen. There was a knock at the door. The defendant was standing there on the doorstep and asked to speak to Mr Hussain. 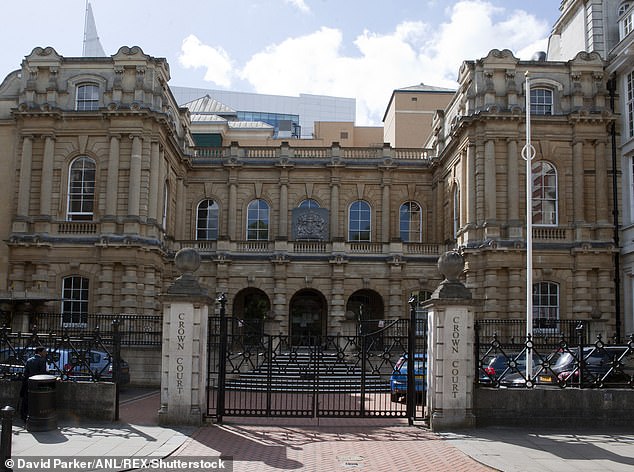 Charles Ward-Jackson, prosecuting at Reading Crown Court (pictured), told how Khan had called Mr Hussain on January 25 and threatened him, saying: ‘You got my house raided by the police. I have got a sword. I am going to come and chop you up’

‘Mr Hussain realised it was acid of some sort and went back inside the house and started frantically washing himself in the bathroom. His friend, Thomas Allen, had gone to the door to see what was going on. The defendant was still spraying acid through the doorway and some of it hit Mr Allen on the arm and on the back of the neck.’

Initially Mr Hussain was taken to Wexham Park Hospital in Slough but was transferred to the specialist burns unit at the Stoke Mandeville Hospital, the prosecutor said, where he was put under general anaesthetic and medics desperately battled to save one of his eyes, the top layer of the retina of which half had been removed when acid got into it.

Surgeons said they believed the eye would recover following treatment, Judge Dugdale was told, but that both victims would have permanent scarring.

Khan handed himself in to Maidenhead police station where he gave a no-comment interview and despite a police raid on his home the bottle he had used in the attack was never found.

The defendant had seven convictions for 15 offences, including causing actual bodily harm, attempted robbery and possession of a knife in 2013 and assault on a constable in 2015.

Defending Khan, Guy Wyatt said: ‘He feels regret from the bottom of his heart. If he could turn the clock back, he would. He recognises the impact, not only on the victim but the victim’s family and the wider community. He plans to be a better man in future.’

Khan appeared by video link from HMP Bullingdon for his sentencing hearing at Reading Crown Court.

Judge Dugdale told him: ‘You knew that Amar Hussain would be at Thomas Allen’s house. You planned to attack him, you got a Coke bottle, half a litre, and in it you put sulphuric acid and you did that intending to throw that into the face of Amar Hussain when you had the opportunity.

‘His face will be scarred for the rest of his life because of what you did to him that day and his right eye may well remain at risk of problems into the future.

‘It is an act which quite understandably causes members of the public real concern, real worry and anyone who commits that sort of act can expect to receive a very significant custodial sentence both as a punishment and as a need to protect the public from that kind of behaviour in the future.

‘When you decide to do that kind of act, you cross a line of human behaviour, you do something which any right-thinking member of the public would find totally awful and once you have done it once, there is always in my view going to be a significant risk that you will do an act like that again.’

The judge jailed Khan for eight years and four months, pointing out that under new legislation the defendant would spend two thirds of his sentence in custody, unlike the half which is usually spent.

Baby hoglets less than 24 hours old are saved after mother left their disturbed...

FEMAIL lust list: Eight summer style updates – and you don’t have to buy...

Queensland Coles supermarkets to run on 90% renewable energy within three...