Police have come under fire after footage emerged showing an officer repeatedly hitting protesters with a baton.

Ugly scuffles broke out as climate change activists blocked the disabled entrance to the Melbourne Convention Centre and had to be physically removed on Tuesday.

Video footage showed protesters moving slowly away from the door as per the requests from police.

One woman in a blue jumper put her hands up as she walked away and was repeatedly struck on the back. Other protesters were also shoved out of the way. 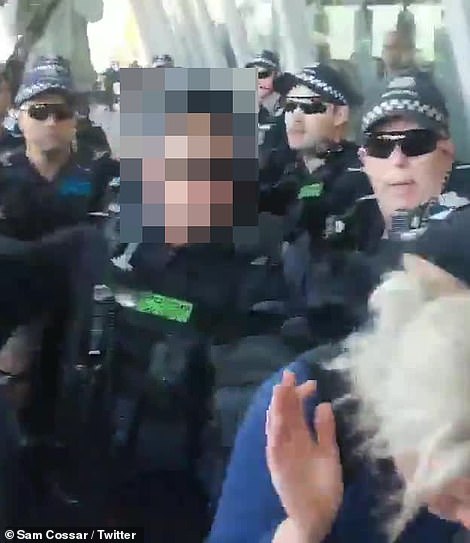 Some social media users expressed their outrage over the eight-second clip shared on Twitter, with one labelling the actions of police as ‘unnecessary heavy handedness’.

Another person wrote: ‘The woman literally puts her hands up in submission and then gets smacked by an overly aggressive police officer with small man syndrome.’

Another said there was ‘not much evidence’ to justify use of the baton.

Others questioned whether the short clip showed the entire story. 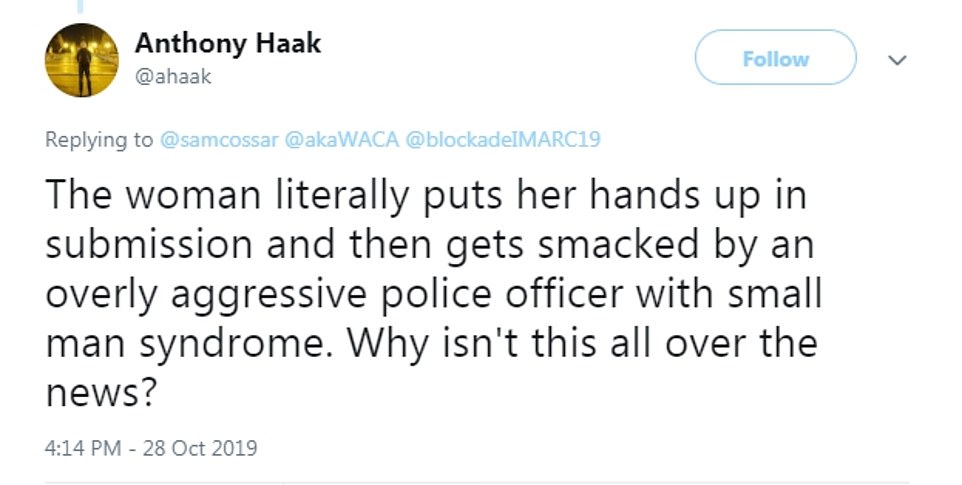 Others questioned whether the short clip showed the entire story. One even heaped blame on the protesters

One social media user said: ‘Only saw one cop with a baton… Interesting to see if there were other angles.’

One person heaped blame on the protesters for their actions.

‘Shouldn’t have blocked the joint simple. Move on don’t be an obstruction. Protest “peacefully”,’ the person wrote.

A Victoria Police spokesman told Daily Mail Australia: ‘Victoria Police is aware of several videos circulating showing the use of force by police during today’s demonstration.

‘The footage is being reviewed to ensure any action taken by officers was in response to the protesters’ unlawful activity and in accordance with training.

‘No formal complaints have been received however, after reviewing the footage if any misconduct is identified the matter will be referred to Professional Standards Command.’

More than 20 climate change protesters were arrested on Tuesday morning as they targeted the mining conference.

Pictures showed a man with dreadlocks and red shorts desperately resisting officers while footage captured several policemen dragging a man away by the face as others used capsicum spray on demonstrators.

Two of the protesters were arrested for alleged animal cruelty after a police horse was attacked, Victoria Police said. 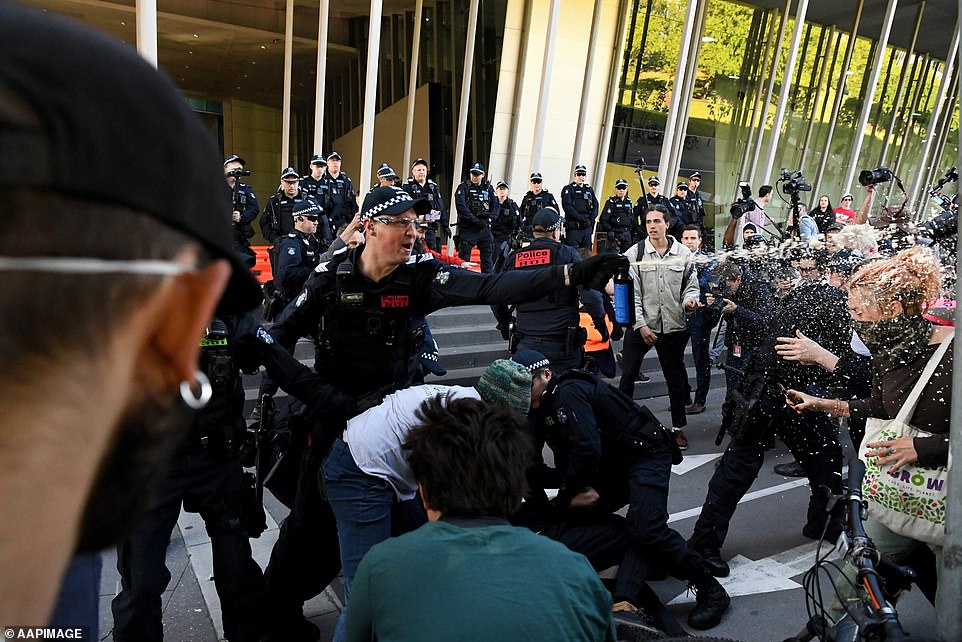 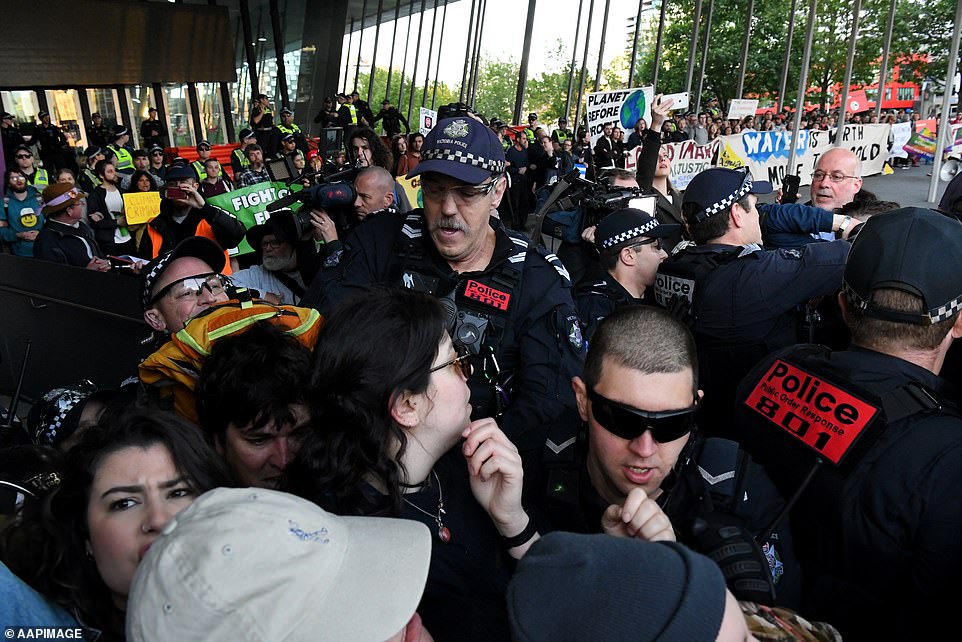 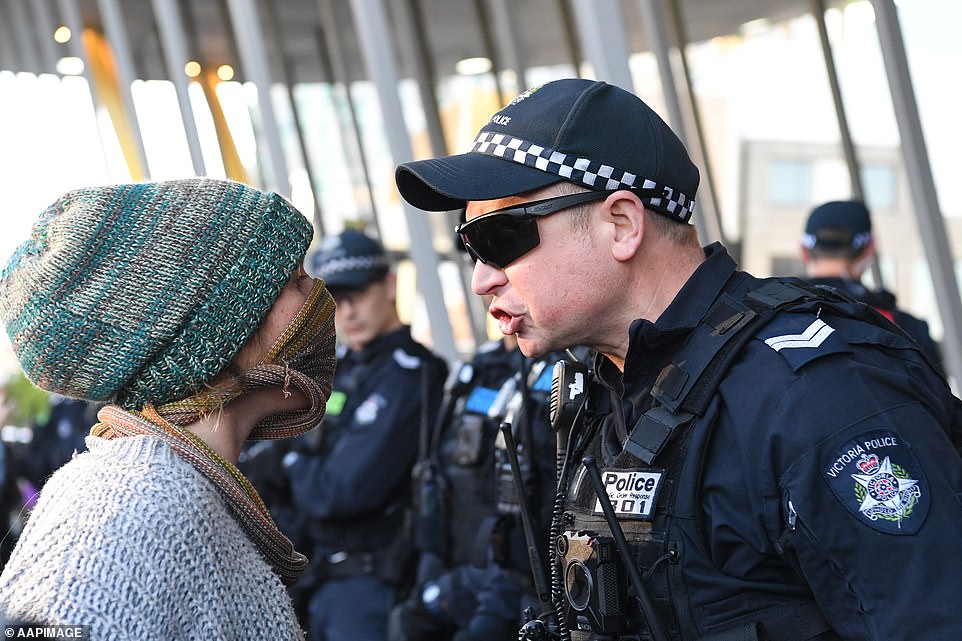 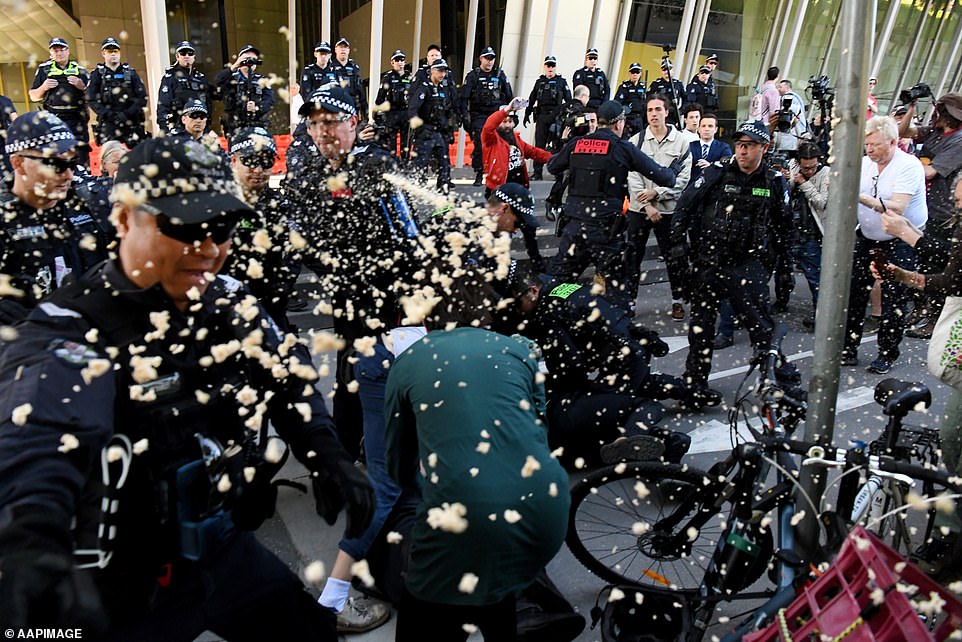 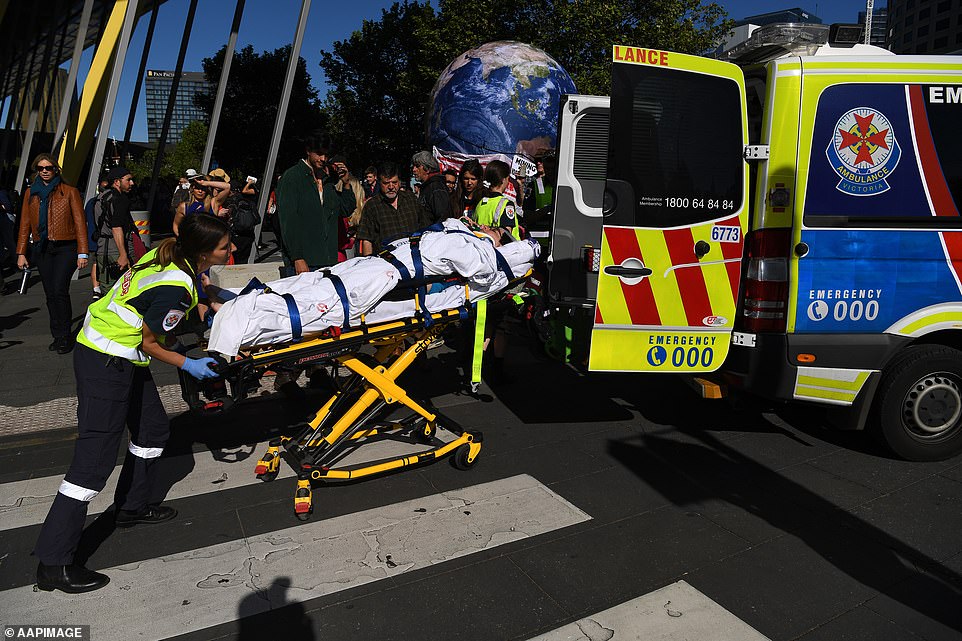 Organisers say the protest action is based on misconceptions about the mining industry.

‘There is a misconception that as an industry mining does not operate with sustainable principles in mind,’ they said in a statement.

Mining is vital for the production of electricity, solar panels, electric car batteries, pacemakers and medical apparatus and public transport, they said.

This year the conference will consider the importance of battery minerals, used in the emerging electric car market, and the growing importance of ethical investment for resource companies.

The activists picketed at multiple entrances to the centre, chanting ‘land rights not mining rights, shut IMARC down’ and ‘blood on your hands’ as they pushed back against a police line.

A Victoria Police spokesman said: ‘Police have arrested in excess of 20 protesters outside the Melbourne Convention and Exhibition Centre.

‘One police member received minor injuries during an arrest and is receiving medical treatment at the scene.’

The International Mining and Resources Conference started on Tuesday and is set to host thousands of delegates from all over the world throughout the week.

Police say 11 different groups plan to cause ‘maximum disruption’ outside the conference, with protests likely to spill across parts of the CBD.

More than 300 police officers will be assigned each day to ensure activists don’t break the law or adversely impact the community.

The Extinction Rebellion group ran a week of climate protests early in the month and Victoria Police acting commander Tim Tully said activists might ramp up their methods this time.

‘We expect to see heightened tactics by the protest groups,’ he told reporters in Melbourne on Monday. 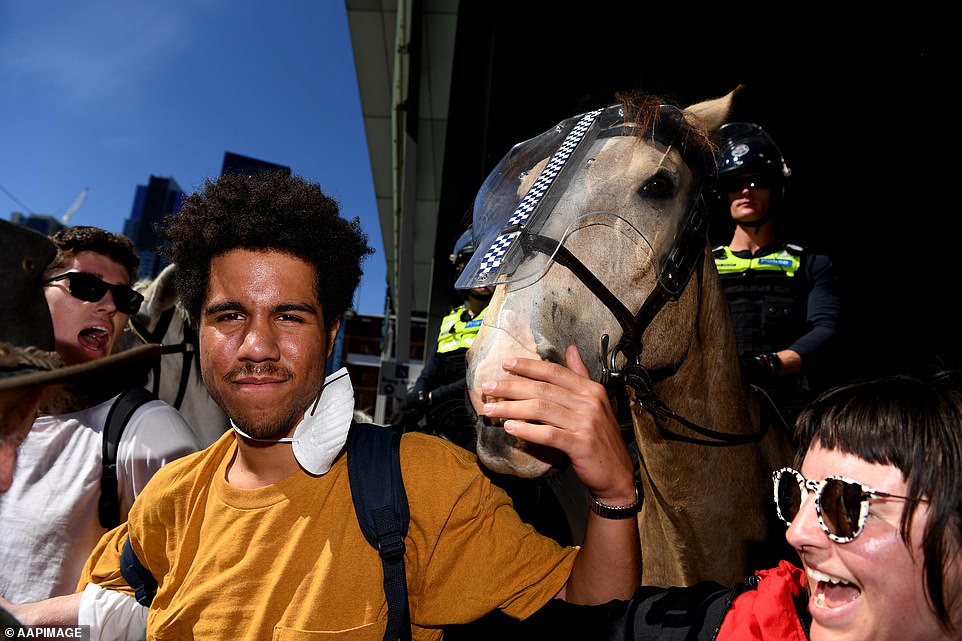 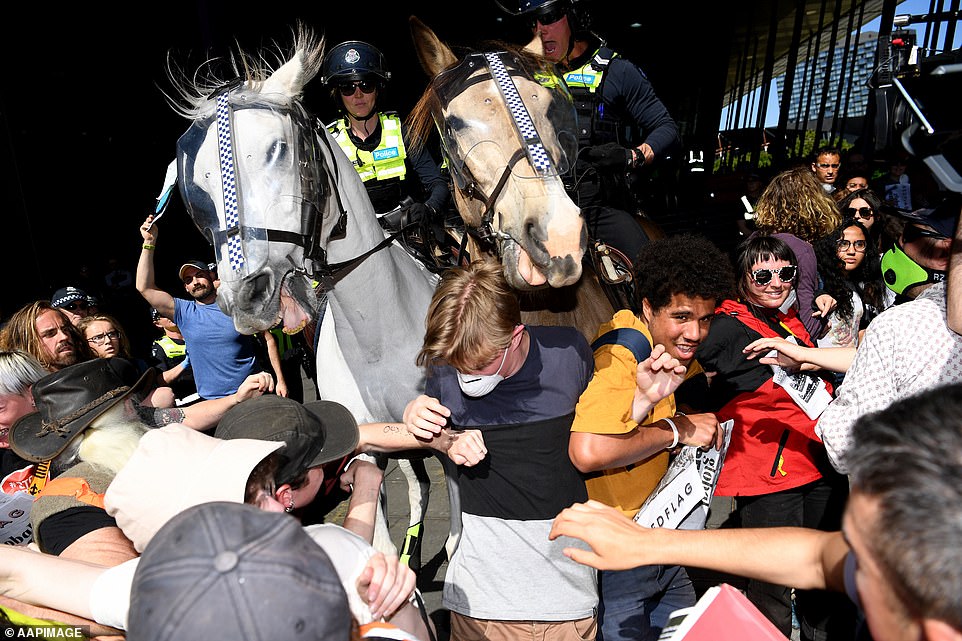 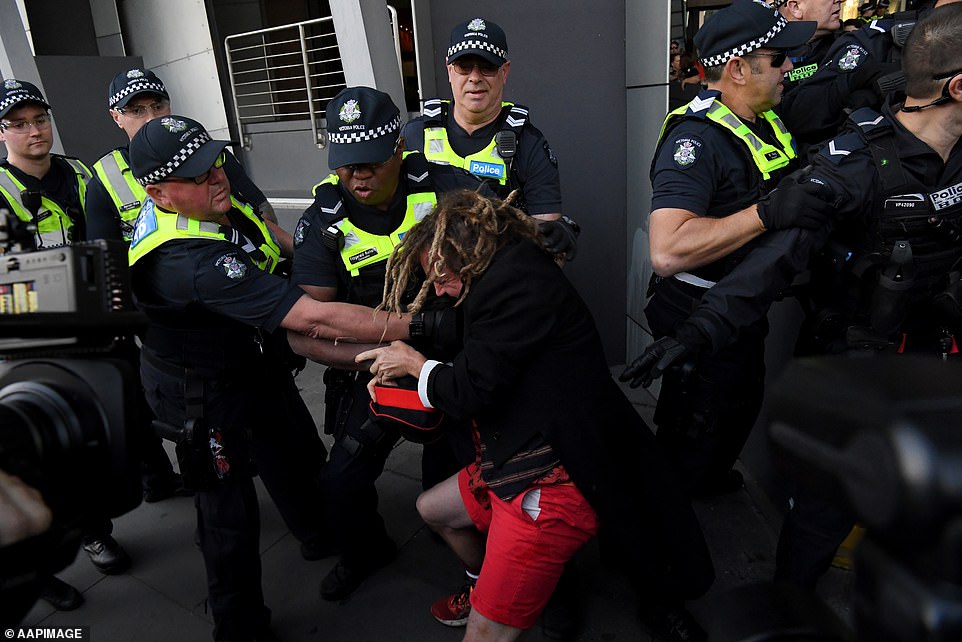 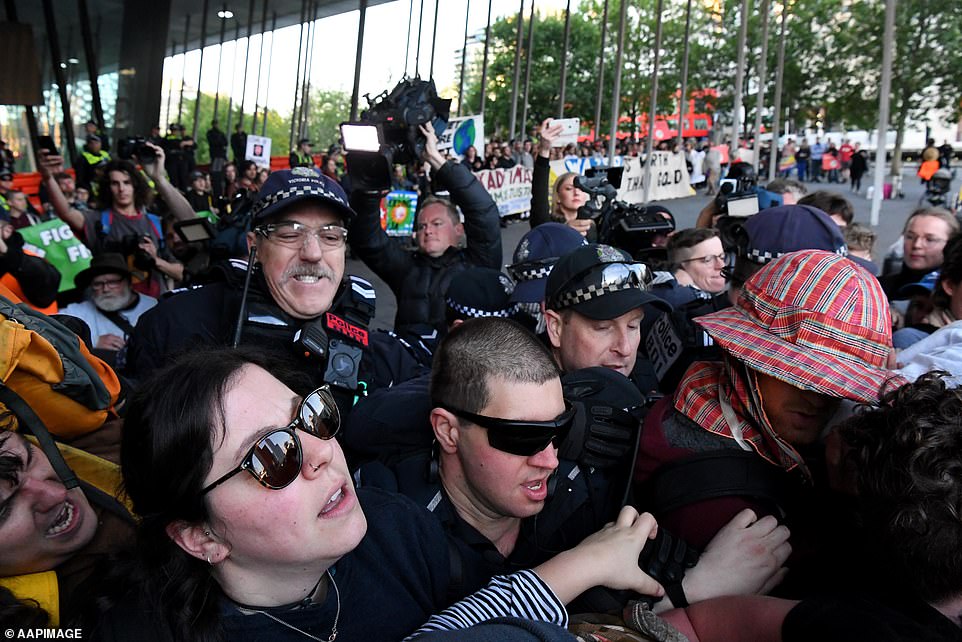 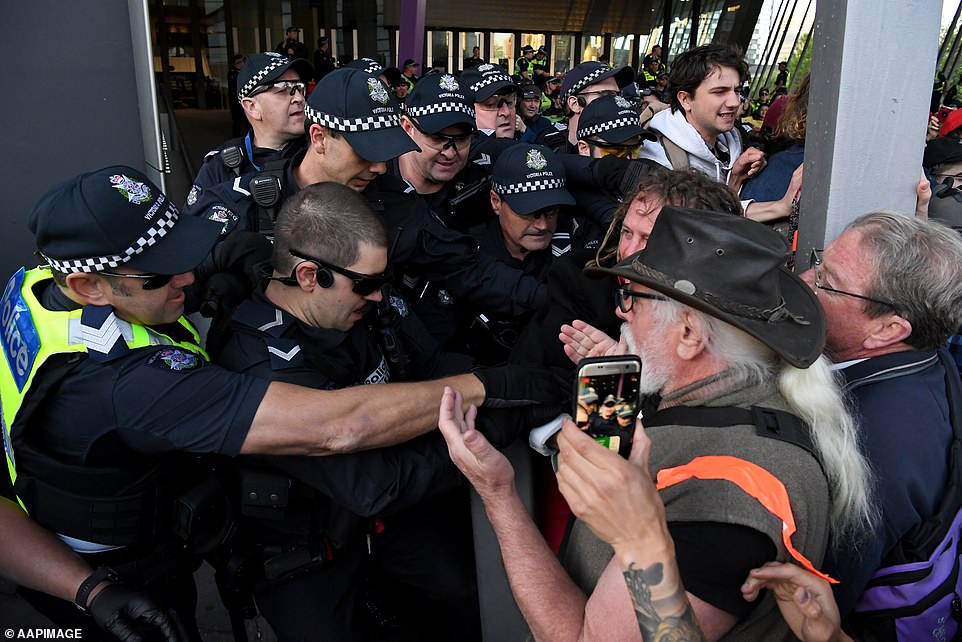 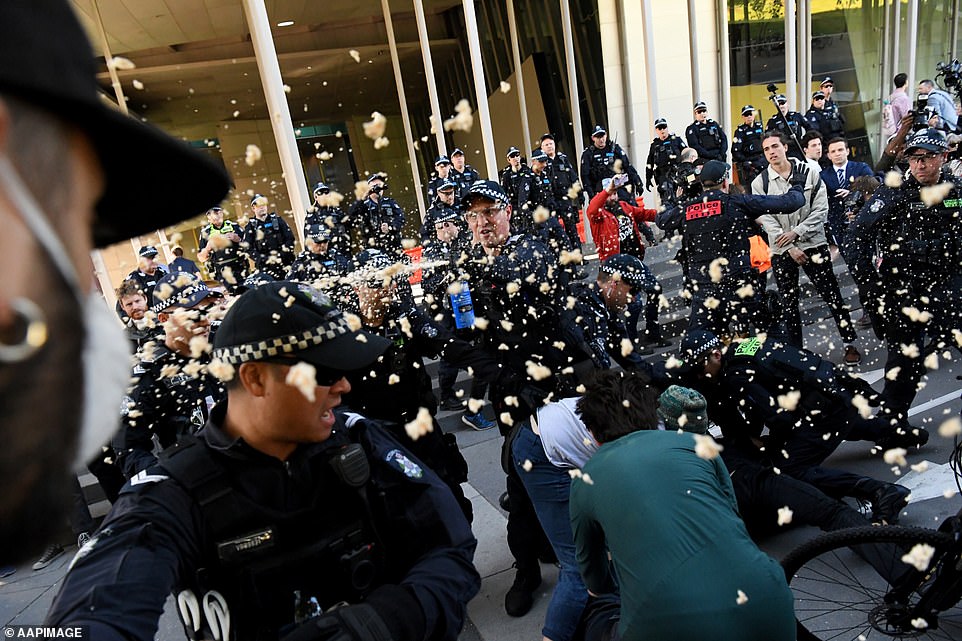 A spokeswoman for one of the groups, IMARC Alliance, said they are not planning to cause havoc in the CBD. Pictured: Police use OC spray

‘We are well prepared to respond.’

A spokeswoman for one of the groups, IMARC Alliance, said they are not planning to cause havoc in the CBD.

‘It’s never been our intention to disrupt the city … we want to shut down the conference using blockading tactics,’ Emma Black told 3AW.

‘Our enemy are not motorists or the police, our enemies are the corporate mining executives.’

But her group can’t control the likes of Extinction Rebellion, she said.

Acting commander Tully said protest groups have been unwilling to give police a good sense of what they can expect to deal with. 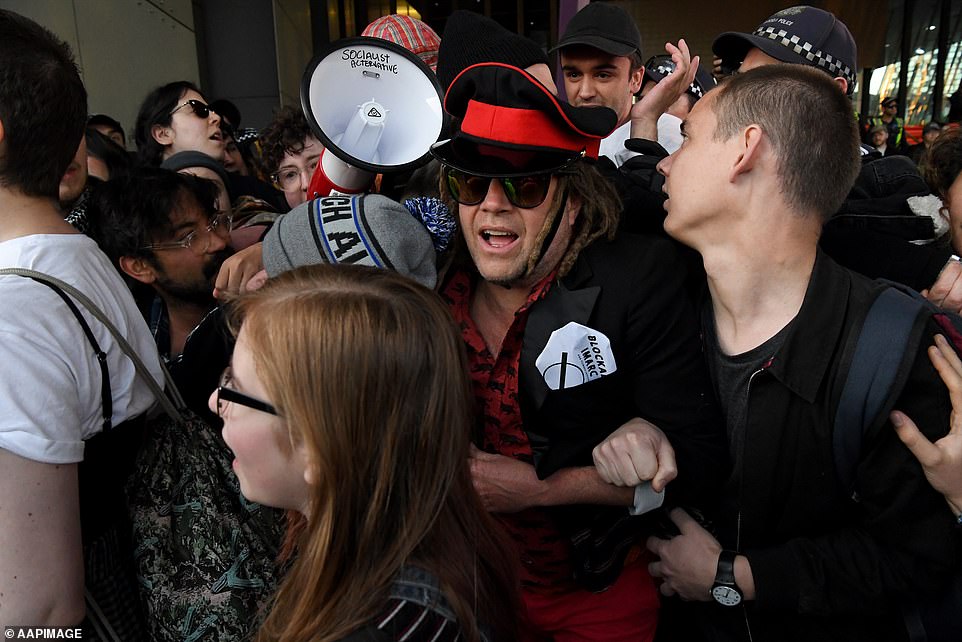 A Victoria Police spokesman said: ‘Police have arrested in excess of 20 protesters outside the Melbourne Convention and Exhibition Centre.’ Pictured: Protesters at the scene 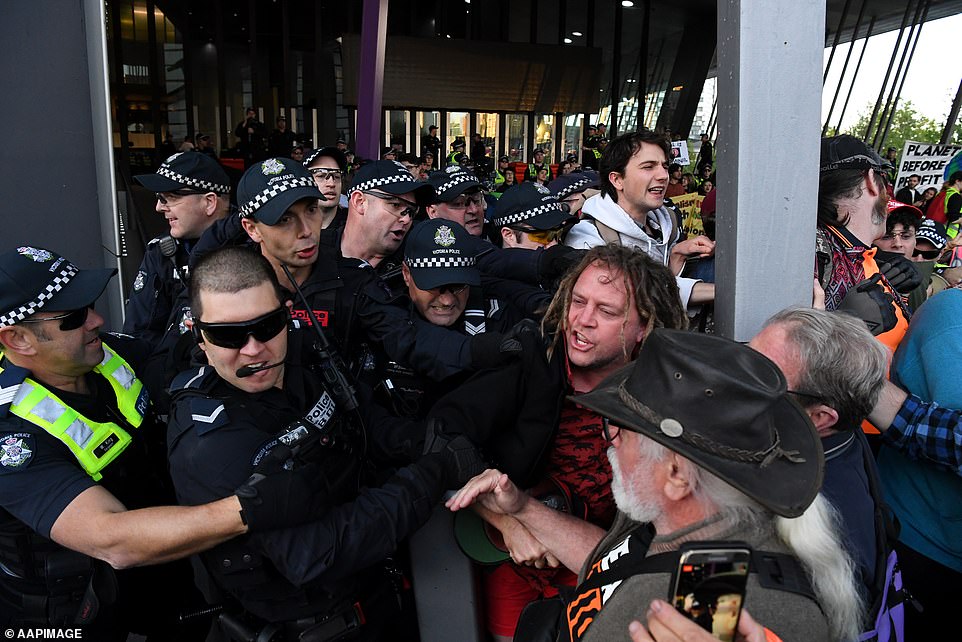 A statement released by conference organisers said they welcomed the protesters’ right to make their views known, ‘but not to cause disruption’. Pictured: Protesters at the scene

‘It’s been very frustrating, the lack of engagement that we’ve had,’ he said.

A statement released by conference organisers said they welcomed the protesters’ right to make their views known, ‘but not to cause disruption’.

Victorian opposition leader Michael O’Brien said people should be allowed to go about their business without being confronted by ‘constant demonstrations’.

‘It’s turning Melbourne into a joke and unless the premier starts giving the police the powers they need to do with it, it’s just going to continue and go on,’ he told reporters.

The mining and resources conference is scheduled to run for three days. 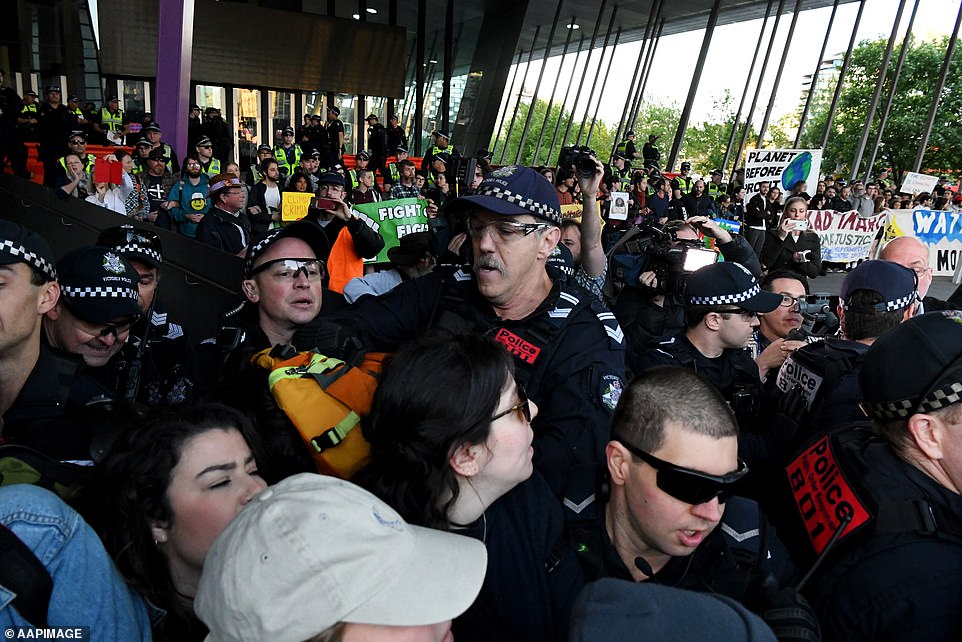 The mining and resources conference is scheduled to run for three days. Pictured: Protesters at the scene

A gutsy prelude to Spurs’ night of glory

Countryfile presenter JULIA BRADBURY reveals she waited WEEKS to get lump in her breast...

Ministers ‘plan to pay up to 60 per cent of wages until SEPTEMBER’ to...

A gutsy prelude to Spurs’ night of glory

Incredible moment a golfer born with one arm drains an hole-in-one...