John Bercow has revealed how he decides between letting loose a short, sharp ‘Order!’ or bellowing a longer, drawn-out ‘ORDEEEHHHGH’.

The Speaker has proven a controversial figure in the UK, particularly after citing a precedent from 1604 to scupper Theresa May’s third Brexit vote last month – but his eccentric manner of speaking has also earned him a peculiar fame online, as well as the status of ‘an idol’ overseas, according to several European publications.

The Speaker’s tone when howling at rowdy MPs varies dramatically, ranging from a harsh, piercing ‘Ordah!’ to a richer, deeper version of the phrase, used to silence noisy Members while discussing important matters of state.

Mr Bercow, the MP for Buckingham, revealed how he chooses between the two – and variations inbetween – in a video uploaded to the UK Parliament YouTube channel on Friday.

John Bercow explained that the shorter version is usually reserved for when individuals are being noisy, whereas the longer version is for general disruption in the House

In it, he explains: ‘When the Speaker is on his feet a member should not be on his or her feet.

‘So if there is a lot of noise I will tend to say “ORDEEEERRRR, the House must calm itself, there’s a long time to go or there are a lot of questions that we need to get through and we must have some order”.

‘Or I will sometimes say “ORDER!” to a particular member who is making an excessive noise, “the Honourable Member must calm himself, he’s becoming very over-excitable”. 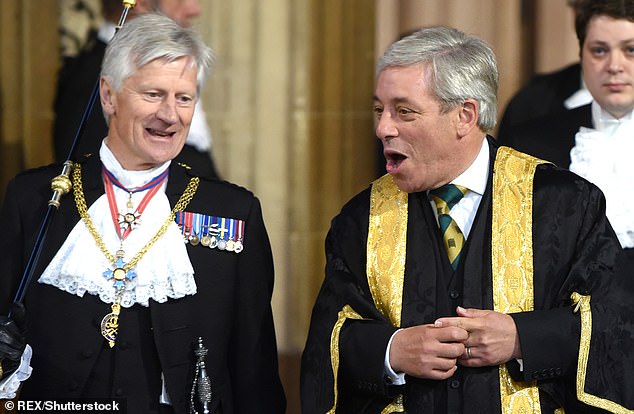 John Bercow was told he was considered ‘an idol’ by many in Europe in an interview published last month (pictured: Mr Bercow and Black Rod, Lieutenant-General David Leakey at the State Opening of Parliament, May 2015)

‘And I think, quite a lot of people will hear me say this if they watch our proceedings and it is not intended to denigrate any particular person, it’s not intended to be dismissive of colleagues, it’s intended to do just what the word says – restore order.’

Mr Bercow also explained that when the Speaker stands up and says ‘Order!’, any Member ‘with any experience’ realises that he or she should sit down.

It is not the first time Mr Bercow’s manner of speaking has earned him online notoriety. A musical rendition of the Speaker saying ‘Mr Peter Bone’ accompanied by Beethoven’s 5th – uploaded by writer and musician Rhodri Marsden – has earned 2million views since it was uploaded last month.

Elected as the 157th Speaker of the House of Commons in June 2009, Mr Bercow has become known for his cutting Parliamentary put-downs.

Prior to his election to the Speaker role, he was a member of the Conservative Party, but has remarked that his views have changed over time, partly due to his wife Sally’s influence.

I’m now so obsessed with Bercow saying “Mr Peter Bone” that I’ve spent a period of time setting it to the opening of Beethoven’s 5th. Brexit is literally driving me mad. pic.twitter.com/P5w31OWkWi 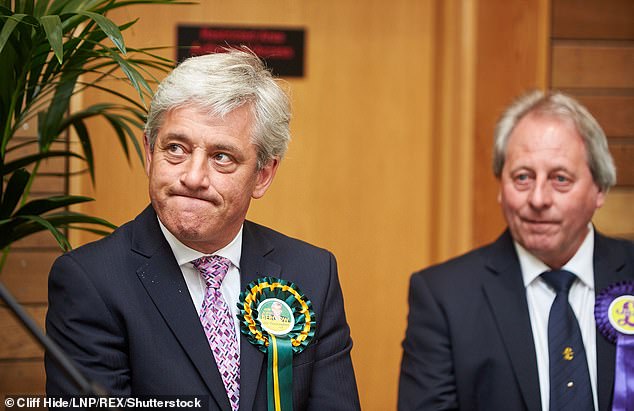 In March he caused outrage among Brexiteers by reaching back to a precedent from 1604 to prevent Theresa May bringing her deal back to the House for a third vote.

His adherence to precedent raised eyebrows among those who remembered him saying ‘If we only went by precedent, manifestly nothing would ever change.’

Mr Bercow’s mannerisms have also attracted him fans overseas. An interview published in La Repubblica and Die Welt last month praised his signature tone and told Mr Bercow, 56, he was considered an ‘idol’ by many in Europe.

Last month he sparked uproar in the Commons by aiming an ‘insult’ at a Conservative MP.

The Speaker remarked that former minister Greg Hands ‘wasn’t a very good whip’ as he admonished the MP for Chelsea and Fulham for ‘disorderly’ behaviour.

Alfie Boe, 46, enjoys ‘dinner date with Liv Knight-Butler, 25, amid claims he cheated on his wife’

Chinese firm has data on 40,000 Brits including Boris Johnson and the Queen ‘to...

Now that IS a bonk-buster!

Harry Styles has added £50m to his fortune ON TOP of his One Direction...