Hair skew-whiff, a homely fireplace as backdrop and matey, first-name terms only.

The Prime Minister appeared before a chosen collection of Westminster’s most self-regarding bobbies yesterday trying to appear as relaxed possible.

It was clear, though, that events of recent days had knocked him off-kilter.

His jowls were walrussy, the bags under his eyes bulging like a frog’s thorax. He looked like a man in dire need of his eight hours.

Boris was making his debut in front of the liaison committee.

This is the outfit composed of all the Commons’ select committee chairmen.

PMs traditionally look forward to visiting them about as much as they do the dentist.

He appeared via video link from Downing Street. IT-wise, at any rate, everything went tickety-boo.

All those ‘technology lessons’ at his friend Jennifer Arcuri’s apartment must have paid off. As for the rest? Well, let’s just say he got through it.

Could they expect to see him again after this?

Boris murmured he had rather a lot on. ‘Time is a bit scarce at the moment.’ A fairly resounding ‘no’, then.

The opening exchanges were dominated by the Cummings business. Jenkin led the way.

Surprisingly, Jenkin took it fairly easy. Not so his colleagues.

Pete Wishart (SNP, Perth) went at the PM the way a miniature schnauzer attacks a newly opened tin of Chum.

What a hot pot of spittle-flecked fury he was.

At one point I thought he gave his computer a Glasgow kiss. He demanded an inquiry into Cummings.

Boris wasn’t a sure that was a very practical use of time during a pandemic.

‘We know what your views are and frankly none of us understand them,’ he implored. Boris repeatedly said it was time we all just moved on.

‘If I get asked the same question what can I do?’ wailed Boris.

Meg Hillier (Lab, Hackney S and Shoreditch) was in bad cop mode. ‘Yes or no? Yes, no?’ she kept yelling. Yvette Cooper (Lab, Normanton, Pontefract and Castleford) worked herself into such a tizzy Sir Bernard eventually pulled the plug on her. So unchivalrous! 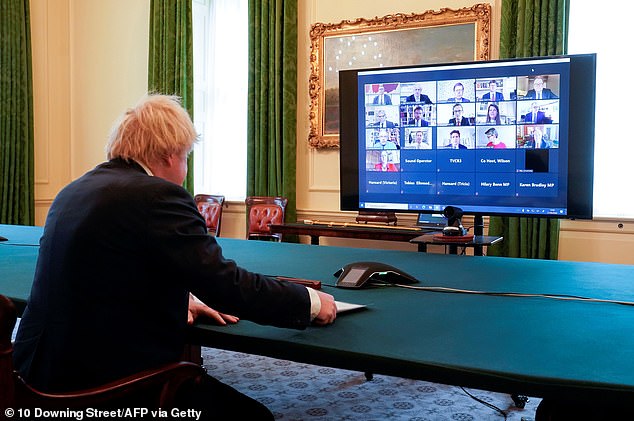 With that early flurry of punches, enter ex-business secretary Greg Clark to discuss science. Phew! Nothing like dull dog Greg to take the sting out things.

We heard lots about the test and trace programme. Here, the PM actually seemed to know his onions.

Jeremy Hunt wanted to know why it had taken until April to get our testing programme up and running. Boris said the ‘brutal reality’ was we had not learned enough from the Sars outbreak.

Ex-health secretary Mr Hunt did not appreciate this covert attack on his reputation.

With an hour now gone, the PM had so far held up OK. Cummings and test and trace had clearly been what he had prepped for.

There was a classy turn from Stephen Timms (Lab, E Ham) who got the PM in a tangle over immigrants who had no recourse to public funds.

Clever chap, Timms. One of Gordon Brown’s brains in the Treasury, once upon a time. One of those ego-devoid characters these committees could do with more of.

What these sessions demand of course is a grasp of detail. Boris is no details man.

His worst moment came when Caroline Nokes (Con, Romsey and Southampton N) gave him a stern finger-wagging over gender equality.

When she brought up childcare provision for when the lockdown is eased, Bojo just looked blank. Agony.

When the session ended the PM visibly lightened up with his interrogators. That cheerful exchange when the tooth doctor says ‘All done’.

Jenkins reiterated that it would be helpful to see the PM before the end of the summer. Boris said he would ‘see what we can do’.

Surfboard lost in Hawaii resurfaces than 5,200 miles away six months later in the Philippines

Surfboard lost in Hawaii resurfaces than 5,200 miles away six months...

Covid-19 patient survives 10 days on a ventilator having been given...

Jersey will be the first British isle to ban smacking children