With a massive reduction in the number of episodes being aired, there has been an inevitable transformation in the way we watch soaps.

A major Friday-night treat of Corrie used to be the break between the double showing (time to make a brew – in keeping with the plot), when the audience had to wait a tense 30 minutes after the cliff-hanger in the first episode before it was resolved in the second.

Then, there was the biggie at the end of the second episode, ensuring that we returned on Monday to start the process all over again.

Now, with the big gaps between episodes of all three soaps – which is likely to continue owing to the limitations of shooting in relative lockdown – there is a constant nagging feeling of dissatisfaction: like an itch you can’t scratch.

It makes one realise how astute story-liners and writers have to be when catering to the human desire for narrative structure.

It will be interesting to see whether the shows continue to operate at a reduced level when life returns to normal (or whatever semblance of normality we can hope for in the times ahead).

Actors have long complained about their excessive workload. Perhaps periods of hibernation are the future.

This is like Chinese water torture (without the water, obviously). Just as we think Geoff is going to be caught out, he leaps one step ahead of everyone else.

We’ve all been relying on the secret camera he installed in the house to be discovered, but when he regains access to the house, he retrieves the damning evidence from the hard drive.

AAGGHH! When Geoff is deleting the footage, Tim catches him in the act… Will this be the end? Possibly not.

Despite Geoff being forced to admit using prostitutes, will Yasmeen tell all in court? The only hope is that Geoff has a software programme that has inadvertently saved everything to a storage cloud and, soon, everything will rain down on his head.

He hasn’t done it for weeks, and even when he was in hospital, there wasn’t one broadcast to cheer him up – I’d have chosen Tom Jones’s Delilah: ‘I found the bottle in my hand and he laughed no more.’ 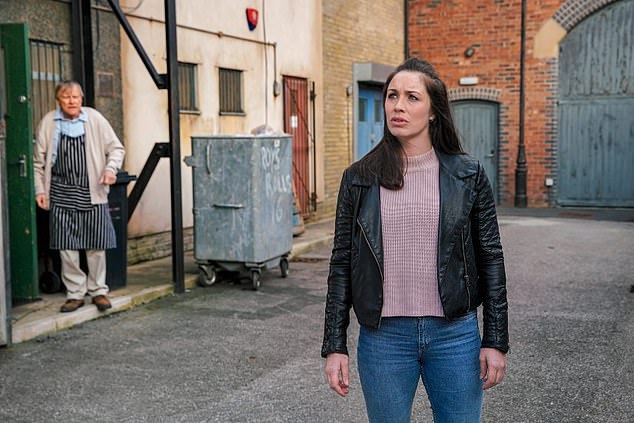 The Platts search for Shona (pictured), who is taken inside Roy’s cafe, in this week’s Coronation Street

Dev, meanwhile, decides to take Asha and Aadi out of Weatherfield High and move them to the private school Oakhill.

Good luck with that; has he seen the fees? Sales of one bottle of shiraz and 4oz of bonbons a month aren’t going to put a dent in that bill.

NOT MISSING IN ACTION

How much time do locals spend looking for ‘missing’ people? How far can they go, for goodness sake? The pub, the café, the ginnel, or, budget allowing, the Red Rec?

The Platts are looking for Shona, who is lurking outside Roy’s café (see? How hard was that?), but she doesn’t recognise Roy when he takes her inside. David is relieved to find her with Roy and he has an idea. Please tell me it’s not involving Nina’s make-up bag.

When will anyone learn that going into partnership with friends is never a good idea? Being involved in any kind of double act with Moira never works out well, including for those with husbands, so what was Rhona thinking? 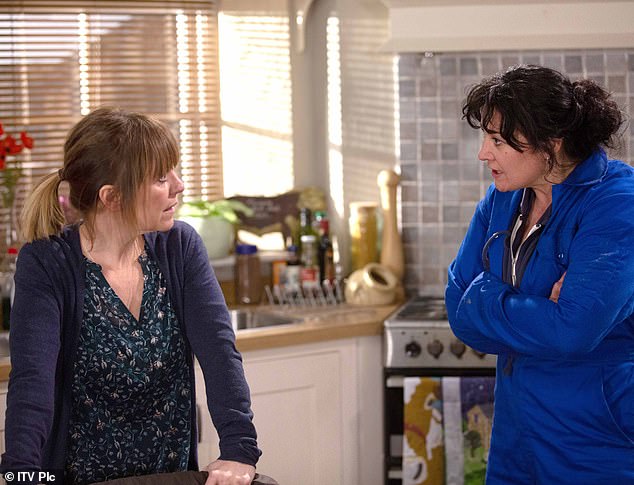 In this week’s Emmerdale, Moira and Rhona (pictured) clash in a meeting with restaurant boss Ricky as their partnership takes a turn for the worse

Sure enough, it takes a turn for the worse when the pair clash in a meeting with restaurant boss Ricky, with Moira claiming his proposed meat order is impossible to fulfil.

But the entire village barely gets through two pork chops and a chicken thigh a week; anyone with a strong stomach and the right kind of cleaver could deliver that order in two minutes.

Reading and writing does not come easily to these villagers, whose penchant for kidnappings, guns and rolling around in haystacks takes precedence over education.

So, on the rare occasions anyone gets to write anything down, you’d think they’d pay extra special attention to their missive falling into the right hands.

Alas, for Wendy, Rishi believes that her love letter to Bob is meant for him and he then discusses its contents with Bob, who later denies his feelings for Wendy when she confronts him.

Oops. Will women never learn? Don’t ask a man what he’s feeling: the most you can hope for is a grunt. 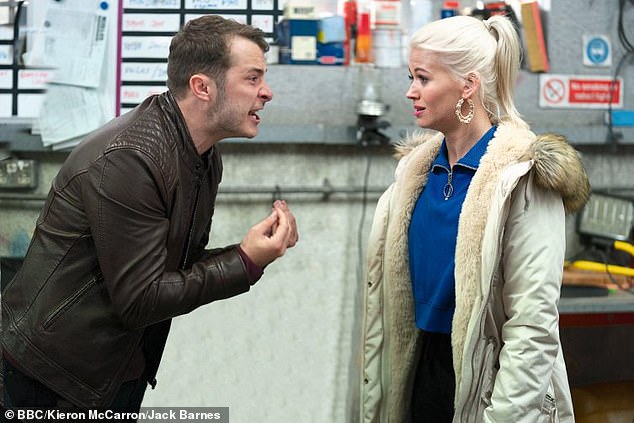 And so, the day of The Job comes along and, with it, a ton of things that go wrong every time Phil and his Mafia Lite bunch of cronies attempt anything.

Goodness knows why Phil thought it a good idea to rope his son in (the episode is entirely from Ben’s perspective with limited audio), and Ben’s lack of focus is intensified when he sees Peter and Lola together.

Ben confronts her, but it’s hard to see why her behaviour drives him to such distraction, even though he is Lexi’s father.

When Lola admits she slept with Peter, Ben’s driven to drink. Mind you: it doesn’t take much to send a Mitchell running to the bottle: Google Maps and the word ‘pub’ is usually all it takes.

As Phil and Danny head off for The Job, what will happen with the proverbial gun on the loose (yes, I think it’s the same one from the props’ department they bring out every time someone says, ‘We got a Big Job on; you in, bruv?’ or words to that effect)? Finding himself at the wrong end of the barrel, Ben is in trouble yet again. Shoulda left it.

JACK – BACK IN YOUR BOX! 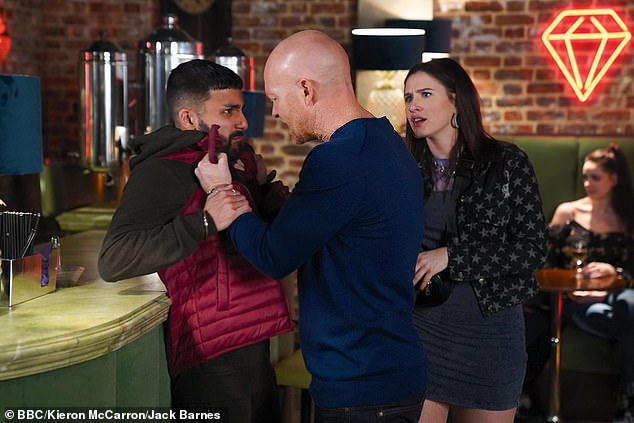 Jack is so pompous these days – always sticking his nose in and offering advice where it’s not wanted. How I long for those heady, sexy days when Janine was chaining him to a radiator and the like.

Now, he’s offering Max advice about his relationship and it inevitably falls on deaf ears, especially when Max spots Ruby flirting with Martin.

Trying to be the Big Man, Max pulls Vinny up on dealing laughing gas, but will Ruby be impressed? Surely there are better ways to please a lady, Max.

A pint and a bag of crisps usually does the trick in Walford. And what’s Martin got to offer her, anyway? A pound of Granny Smiths? Discount carrots?

Poor Max – he doesn’t have much luck with the ladies, does he? There have been a lot of them, but I would have started asking some questions about my behaviour when my partner decided to bury me alive in a forest.

Maybe he does have something to learn from Jack – if only where to buy an overcoat as good as his. A decent shave wouldn’t go amiss, either.

Michelle Keegan returns to work as she records a radio play

Margaret Thatcher’s £300,000 statue should still be erected in her home town say supporters

Warning: these common medicines may cause personality change

Sebastian Shakespeare: Aristocrats call for change to tradition in the wake of JK Rowling’s...

People who work in offices lit by natural daylight sleep for...

BAZ BAMIGBOYE: The secrets of how Joe Cole keeps his cool...