Blindsided by being dealt from Detroit to Cleveland at Thursday’s NBA trade deadline, a furious Andre Drummond tore into the league on Twitter, blaming a lack of loyalty for ending his nearly eight-year tenure with the Pistons.

‘If there’s one thing I learned about the NBA, there’s no friends or loyalty,’ he wrote on Twitter. ‘I’ve given my heart and soul to the Pistons, and to have this happen with no heads up makes me realize even more that this is just a business!’

Drummond, a two-time All-Star for the Pistons, made sure to thank his many fans in southern Michigan.

‘I love you Detroit,’ he wrote, adding in a second tweet, ‘you will always have a special place in my heart!’

Blindsided by being dealt from Detroit to Cleveland at Thursday’s NBA trade deadline, a furious Andre Drummond tore into the league on Twitter, blaming a lack of loyalty

And in a picture of himself with his young son, Drummond tweeted the caption: ‘Remember son trust no one.’

Despite his success and popularity in Detroit, the six-foot-11 center was dealt to the Cavaliers for role players John Henson and Brandon Knight, as well as ‘the less favorable’ of Cleveland’s two second-round draft picks in 2023.

Both Henson and Knight’s contracts are expiring, so Drummond, who has a $28.7 million player option in his contract for next season, was effectively traded for salary cap space that Detroit can use to sign other players this summer.

But although Drummond is going from a playoff contender to the Eastern Conference’s worst team, he did offer some encouragement for his new fans.

‘On to the next @cavs hope your (sic) ready!’ he wrote. ‘Let’s finish the year off the right way.’

The teams made the deal official Thursday night after getting league approval. 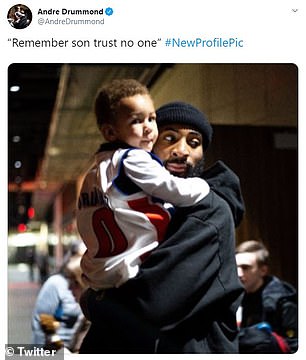 Drummond also tweeted a warning to his young boy: ‘Remember son trust no one’

Cleveland needed to do something to save a season that’s been worsening by the day. The Cavs are just 13-39 under first-year coach John Beilein and some recent blowout losses have raised concerns about the team’s direction under general manager Koby Altman.

But by landing Drummond, who leads the league in rebounding, the Cavs helped themselves in the short-term and positioned themselves for the future.

The Cavs had been expected to be aggressive leading into the deadline and signs pointed to the team moving either star forward Kevin Love or center Tristan Thompson, who is in the final year of his contract and will be a free agent this summer.

However, Love and Thompson are staying put — for now— and will be joined up front by Drummond, a 6-foot-11 force who leads the league with 15.8 rebounds per game and averages 17.8 points and 1.7 blocks. He’ll immediately improve the Cavs, who have the Eastern Conference’s worst record, and he’ll take some of the pressure off Cleveland’s young guards, as well as Beilein.

Although he would prefer to play for a playoff contender, Thompson, who has been with Cleveland since being drafted No. 4 overall in 2011, is not expected to seek a buyout. 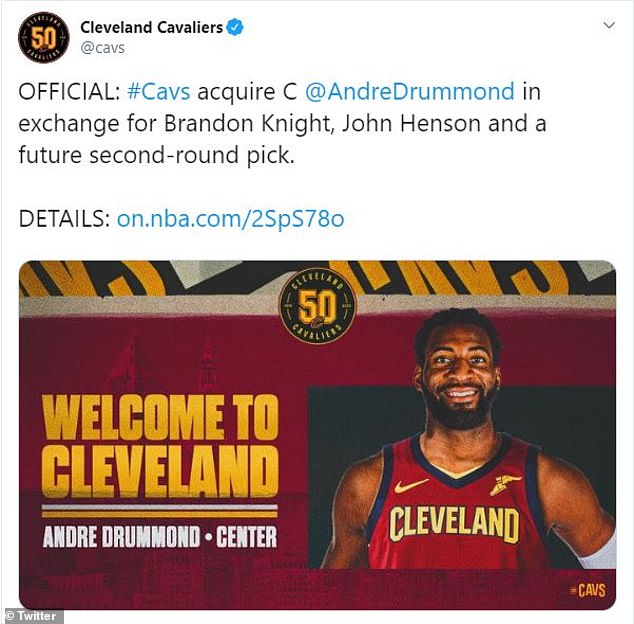 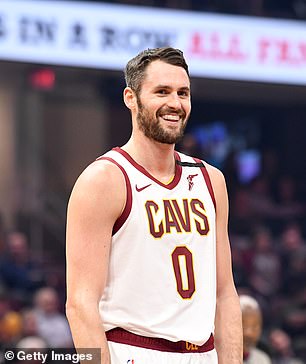 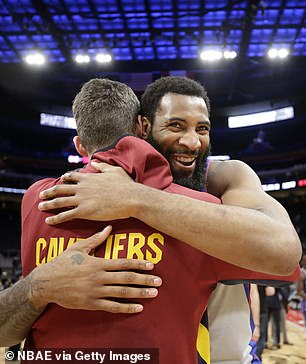 Count Kevin Love (left, near right) among those who are excited about the trade

Drummond even had a playful exchange with his new teammate, Kevin Love

The Cavs have dropped 12 of 13, and some recent lopsided losses have been troubling. Beilein has bemoaned a lack of size up front this season to combat some of the league’s top centers. The 6-foot-10, 280-pound Drummond gives Beilein another option inside.

If Drummond picks up his option for next season, Cleveland has another core player to build around, along with young guards Collin Sexton and Darius Garland.

Henson had been injured during much of his stay with Cleveland. He joined the Cavs last season after being traded from Milwaukee. He’s in the final year of a four-year, $48 million contract.

Knight, too, had an expiring contract and his role had been severely reduced with Cleveland turning toward Sexton and Garland as the foundation for its future. The 28-year-old is making $15.6 million this season, his final one on a five-year, $70 million deal.

This will be Knight’s second stint with the Pistons, who drafted him eighth overall in 2011. He played two seasons in Detroit, averaging 13.1 points and 3.9 assists in 141 games. 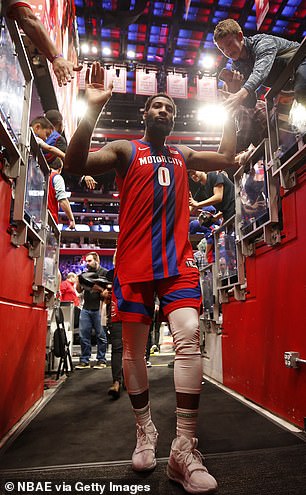 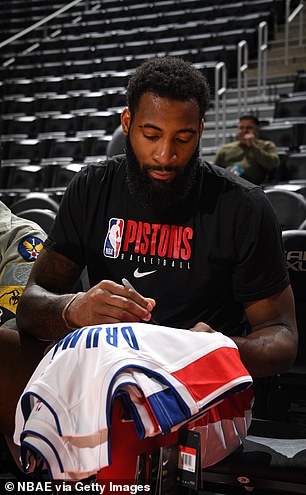 Drummond, who has a $28.7 million player option in his contract for next season, was effectively traded for salary cap space that Detroit can use to sign other players this summer

Detroit has been hesitant to start a full rebuild, but trading Drummond for minimal return is one step toward a significant overhaul of the roster.

‘We are grateful for Andre’s contributions to our team, our franchise and the City of Detroit,’ Pistons owner Tom Gores said. ‘He’s a special player who improved his game every year and represented the Pistons well both on the court and in the community. Though our paths are diverging for the moment Andre will always hold a special place here with me, and in the City of Detroit.’

The Pistons entered this season with its expensive trio of Drummond, Blake Griffin and Reggie Jackson still intact, but injuries to Griffin and Jackson have diminished Detroit’s ability to contend. They’re just 19-34, and while Drummond has played well, the performances of youngsters like Bruce Brown, Sekou Doumbouya and Svi Mykhailiuk have seemed more pertinent to the team’s future.

The Pistons haven’t won a playoff game since 2008, and they haven’t been bad enough — lucky enough in the lottery — to land a really high pick in the draft. Drummond was a successful first-round pick (No. 9 overall) from 2012, but for all his points and rebounds he wasn’t able to lift the franchise to significant heights. 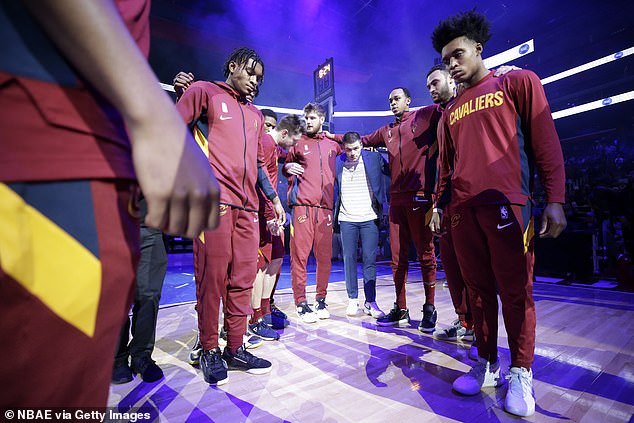 If Drummond picks up his option for next season, Cleveland has another core player to build around, along with young guards Collin Sexton (right) and Darius Garland

Tom Jones recalls childhood battle with tuberculosis during One World: Together At Home broadcast

Help For Heroes will make 90 staff redundant after charity’s income dropped during Covid...

Man walks around with a knife coming out of his HEAD during New York’s...

Poll finds 56 PER CENT of Scots want to break up...

The wildly popular holiday spots where tourists and locals have been...

Should women really hold out for Mr Perfect? As author Joanna Trollope...

Joe Biden’s brother Frank had just $29 in his bank account,...