A mother who left her children playing with a tub of paint in the bath tub, revealed the hilarious consequences that’s followed.

Donna Evans, 32, who lives in Cannock, West Midlands, thought she had discovered the perfect ‘parenting hack’ to minimise the mess when her children, Hallie, seven, and Isaac, three, painted together – by popping them in the bath while they played.

On several occasions her plan had worked perfectly, but when she stepped out of the bathroom for 15 minutes to take an important work Zoom call, she returned to find her children, the tub, the walls and everything within reach coated in green paint.

Donna Evans, 32, who lives in Cannock, West Midlands, was left in hysterics after her children Hallie, seven, and Issac, three, (pictured) covered themselves and the bathroom in green paint, while she was on a Zoom call 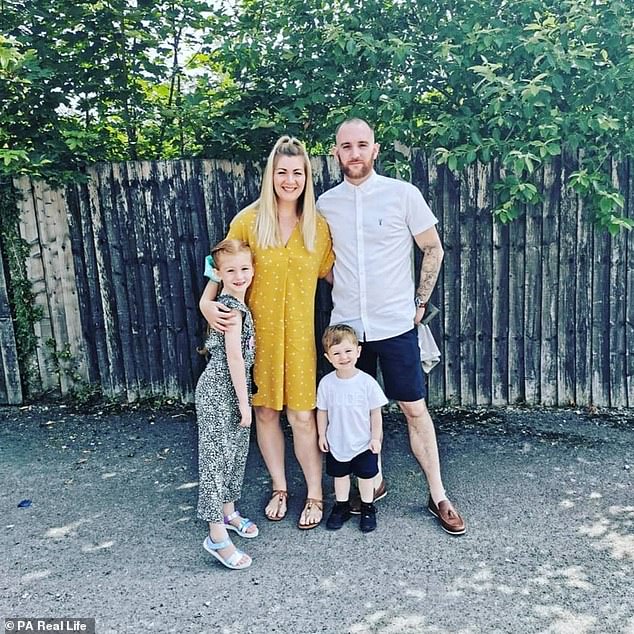 Donna had successfully minimised the mess when her children paint by putting them in the bath tub on several previous occasions. Pictured: Donna and her husband Kye Evans, 33, with their children

Despite needing multiple showers to clean the children, who retained a green tinge for several days, and some time to clean the bathroom, teaching assistant Donna and her plasterer husband Kye Evans, 33, saw the funny side and have been happily sharing pictures of the mess.

Donna laughed: ‘The children are usually quite well behaved. They’ve done things in the past like draw on the walls, but this is a new level.

‘Hallie had even washed Isaac’s hair in paint! They were covered in it and their skin had a green tinge for a couple of days.

‘I had to laugh though. They were only kids being kids.’

The best of friends, brother and sister love playing together – but as Hallie gets older, she has started to steer Isaac towards mischief.

Donna added: ‘Now Hallie is a little older, she encourages Isaac, and they have grown slightly more mischievous.’ 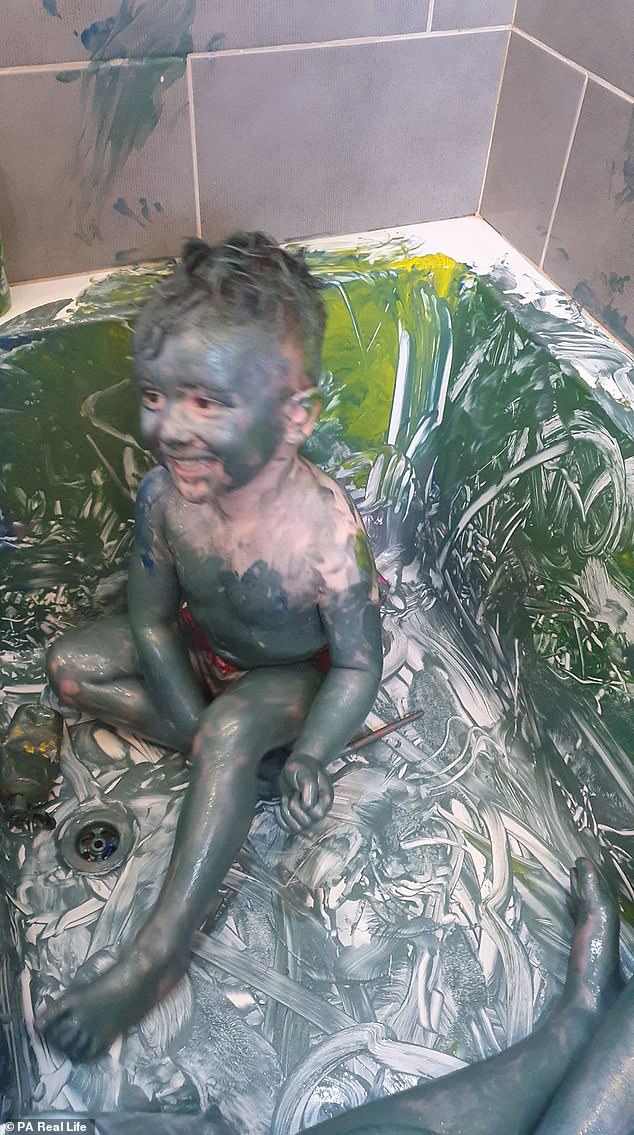 The mother-of-two dressed the children in swimwear and gave them water-based paints, while she stepped out of the room. Pictured: Issac covered in paint

The savvy mother who was outwitted, prides herself on coming up with tips and tricks to make parenting easier – such as painting in the bath, to prevent spillages and avoid staining her carpets.

‘I thought it was a really great hack, or solution – but clearly it isn’t,’ she laughed.

With both children at home while UK schools remain closed because of Covid-19, giving the duo water-based paints, brushes and paper, while dressing them in swimwear to avoid messing up their clothes and plonking them in the bath had, Donna thought, been one of her most ingenious ideas.

But, the moment her back was turned, she was proved very wrong.

She said: ‘I had to take quite an important Zoom call, so I stepped out of the room and sat outside the bathroom door, leaving the kids to it.

‘That way, I could keep one ear out for them and make sure they were okay. 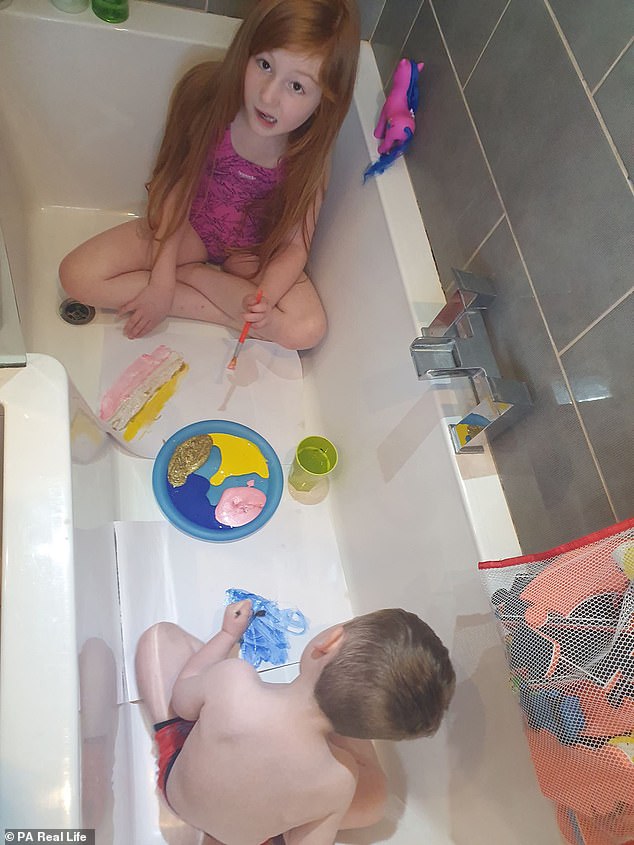 Donna said she didn’t realise that she had left the shampoo and shower gel bottles on the side of the bath. Pictured: Hallie and Issac before their painting got out of hand

‘I didn’t realise it at the time, but I had stupidly left the paint on the side of the empty bath, with the shampoo and shower gel bottles.

‘I could hear them laughing, but assumed it was just them playing and having fun.’

During the 15 minutes that they were left alone, Hallie and Isaac had completely covered themselves and the bathroom in green paint – set off by bright blue hand prints.

Donna continued: ‘I had no idea where to start with the clean-up. They’d got paint absolutely everywhere. 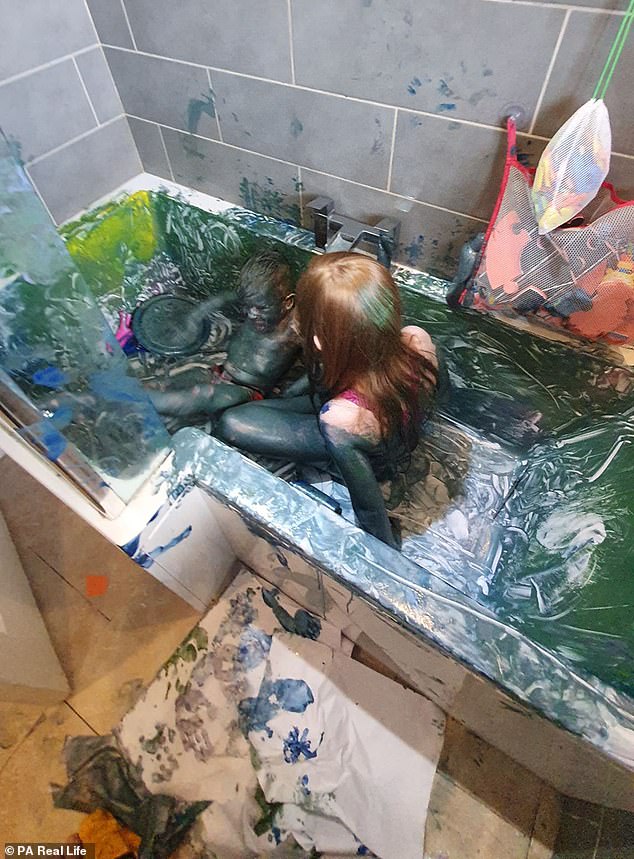 The mother-of-two said she ended up laughing with Hallie and Issac (pictured), because they looked so silly with their bright green skin 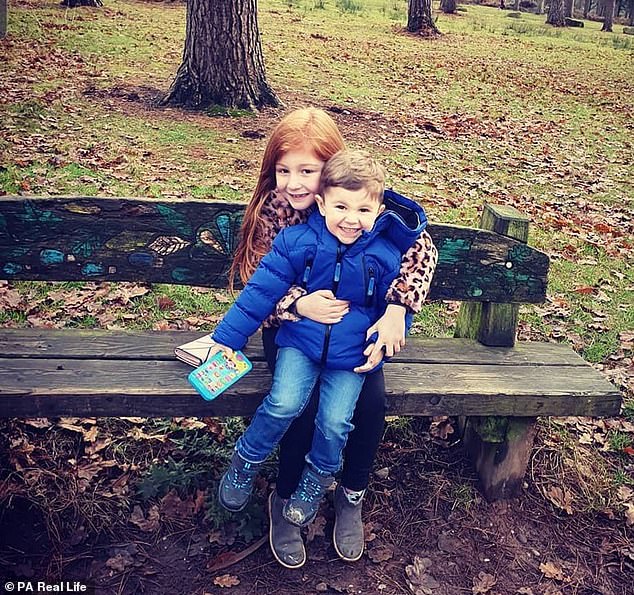 ‘Of course, they thought it was hilarious and I ended up laughing with them. They looked so silly, beaming away with bright green skin.

‘I had to fill the bath and rinse off the sides to get the paint away before I could even think about washing them.’

In the end, Hallie and Isaac both needed three showers each and even after that, their skin had a green tinge for a few days.

‘Eventually, it came off the bath too, with the help of some bleach and elbow grease. I’m surprised it didn’t stain,’ said Donna. ‘I watched a lot of Mrs Hinch, the cleaning influencer, videos for tips.’ 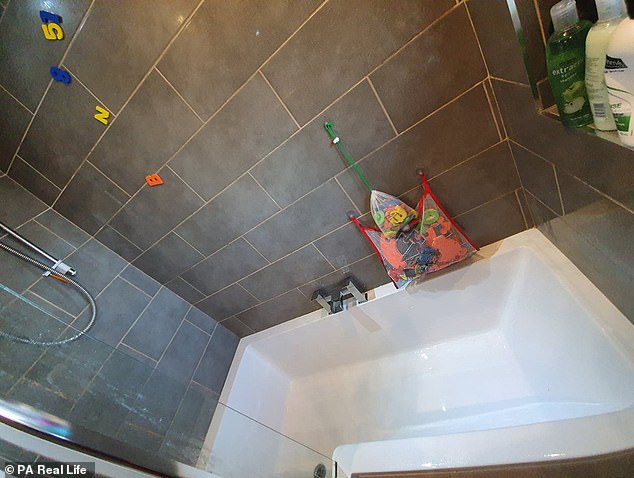 Donna said she was able to clean the bath using bleach and tip videos from Mrs Hinch. Pictured: The bath after Donna scrubbed it clean 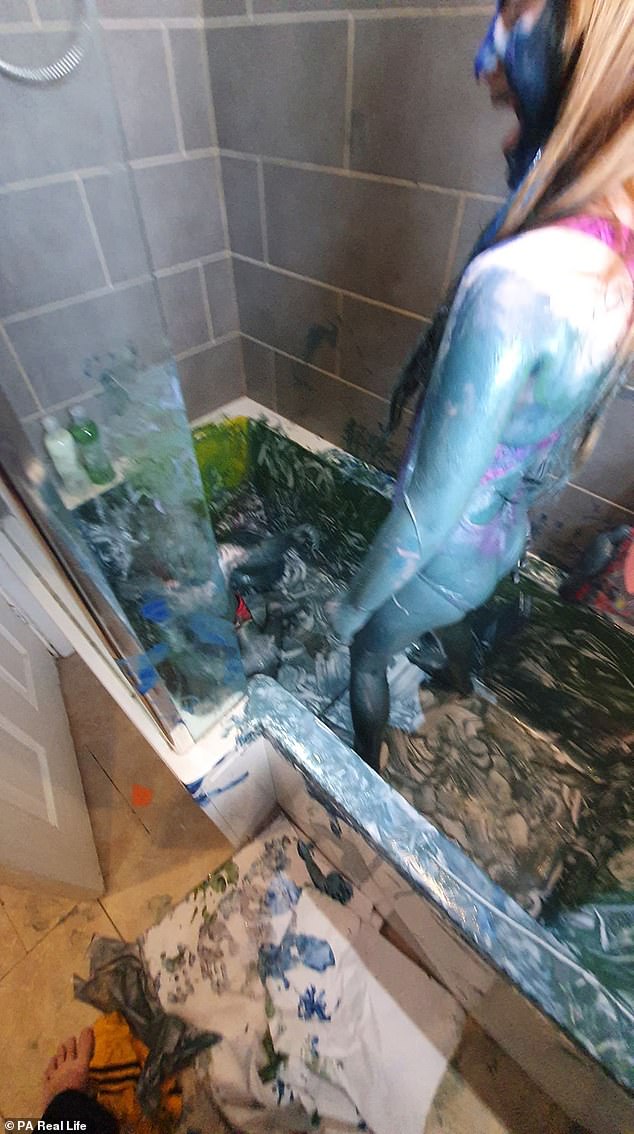 Donna took plenty of photos and videos to show Kye, who was at at the time. Pictured: Hallie and Issac covered in paint

Not wanting Kye, who was out at the time, to miss the fun, Donna took plenty of pictures and video to show him when he got home.

‘He couldn’t quite believe how much carnage they’d manage to cause in 15 minutes,’ she said.

‘Like everybody else, we are taking life day by day at the moment, and nobody knows for sure when the children are likely to go back to school.

‘One thing is certain, though, I won’t be giving them paint again any time soon.’ 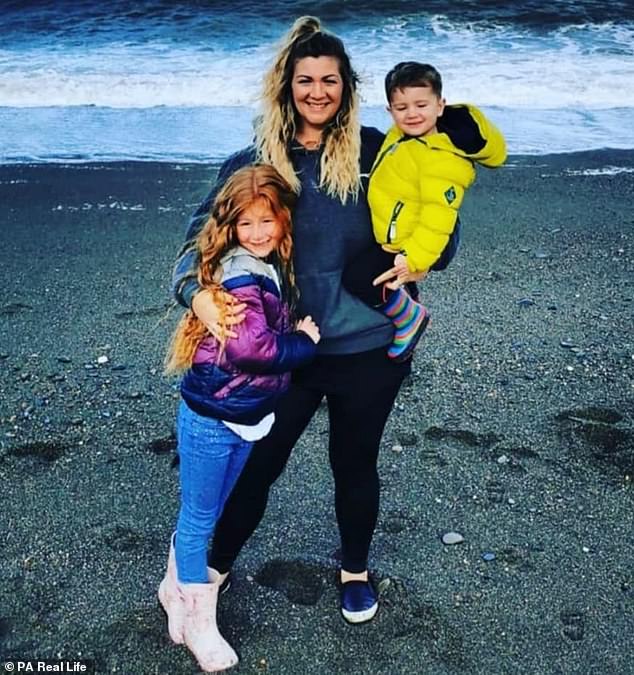 Donna admits she won’t be giving her children paint again any time soon. Pictured: The mother-of-two with Hallie and Issac

Quarantine craze that’s got Hollywood singing into its hairbrush

Microsoft says it is ‘prepared to explore purchase of TikTok’ in...

Personal trainer Sophie Guidolin 30, shares the five things she did...