Pregnant alpacas cry out in agony and vomit as they are tied up, ‘stretched’ by the legs and stamped on in horrifying secret video captured at Peruvian wool farm

By Chris Pleasance for MailOnline

Disturbing footage has revealed alpacas being kicked, stepped on, and vomiting while being roughly shorn of their wool in Peru.

Campaigners from animal rights group PETA captured the video in secret at the Mallkini Ranch – Peru’s largest alpaca farm, located in the south of the country.

The footage shows animals being tied up by their front and back legs and winched out until they are lying flat so their coats can be trimmed.

PETA activists filmed alpacas being subjected to rough treatment while being trimmed of their wool in Peru, including one that was filmed being violently sick

Workers can be seen treating the animals roughly – kicking them, throwing them, and dragging them around by their ears and tails.

At one point a worker appears to stamp on an alpaca, placing a boot across the animals neck as it writhes around.

At least one animal can be seen vomiting violently, which PETA says is a sign of stress in the animals, while several others show signs of having gotten sick.

In several cases the treatment is rough enough to cause the animals to bleed, with some receiving cuts deep enough to require stitches.

Footage shows staff at the ranch stitching these wounds, which PETA’s researchers claim was done without anesthetic.

PETA also claims some of the animals were pregnant while being subjected to the rough treatment. 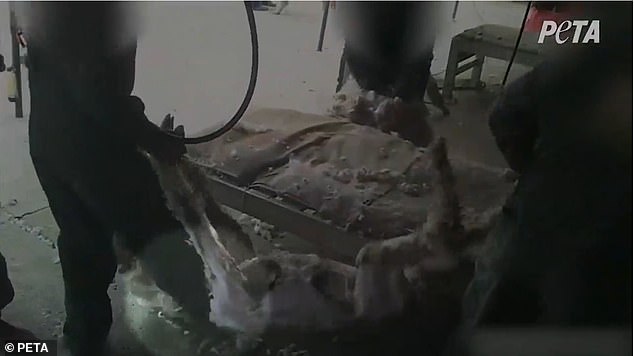 Workers were filmed tossing, kicking and stamping on the animals – with one putting his boot across an alpaca’s neck (pictured) 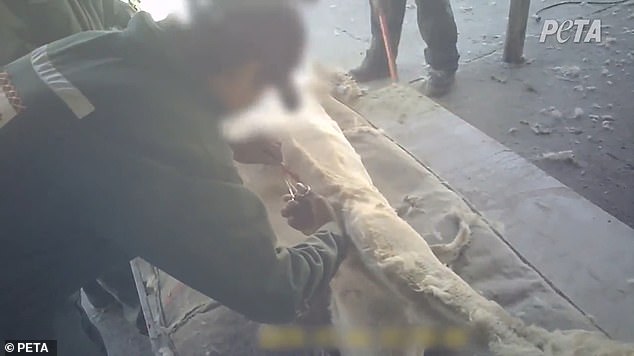 The rights group is now asking Peruvian authorities to investigate Mallkini for possible violations of the country’s animal protection laws.

It also claims that brands including Espirit, H&M and Gap have now ended their relationship with the Michell Group, the parent company which owns Mallkini.

A spokesman for the group said they ‘regret’ the actions that PETA’s video shows, but denied they showed established practices at the farm.

The majority of the ranch’s alpacas – which number 4,000 according to their website – are shorn without needing restraint, the spokesman said.

Visitors to the ranch, which is advertised as a tourist destination, are welcome to watch the shearing process, the statement added. 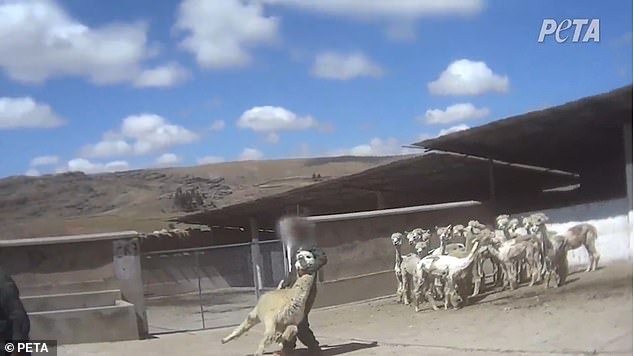 The ranch said it ‘regrets’ the actions that were caught on film, but denies it is part of standard practice – saying only a small number of animals require restraint while being shorn

‘Mallkini is the only Alpaca farm in the world with Organic Certifiation granted by the USDA Organic and the Organic EU Regulation, which covers the soils, breeding, handling, and shearing,’ it said.

‘We have an open disposition for sharing or receiving information, new methodologies, and good herd management practices.

‘We have contacted PETA in order to establish a dialogue on this matter.’

PETA is a campaign group that fights for an end to ‘speciesism’ – the belief that humans are the superior species on our planet.

Have our lodgers left us liable for capital gains tax now we want to sell?

Russian goalkeeper, 16, who was struck by lightning BACK on the pitch less than...

Easyjet braced for showdown with Stelios over £4.5bn Airbus order

Have our lodgers left us liable for capital gains tax now...

Grandson, 30, of Kazakhstan leader is summoned to court despite being...

Lee Majors on Farrah Fawcett and working at 80