A 69-year-old British man has been charged with animal abuse after Spanish cops discovered 544 dogs being kept in tiny cages at an illegal breeding farm.

A metal drum full of burnt puppy remains was also discovered by the Spanish Civil Guard.

The Guardia Civil have since rescued the dogs from the breeding farm, that is in the town of Maella, in the northern Spanish province of Zaragoza.

In a video shared by law enforcement, investigators can be seen showing the matted fur on the face of a Yorkshire Terrier before dozens of dogs are seen crammed into tiny cages stacked on top of each other in a run-down farm building.

In a video shared by the Guardia Civil – or Spanish Civil Guard – hundreds of dogs kept in tiny cages and horrible conditions could be seen at a farm run by a 69-year-old Briton, who has been charged with animal cruelty. Pictured: Guardia Civil officers inspect the cages

Some of the cages contain puppies and their mothers, with matted fur dropping into the cages below.

The investigation started in March when officers from the Nature Protection Service (SEPRONA) of the Spanish Civil Guard began looking into the former rabbit farm.

The facilities were being rented by the British man, who had turned the site into a dog farm which he ran with a 50-year-old Romanian woman. 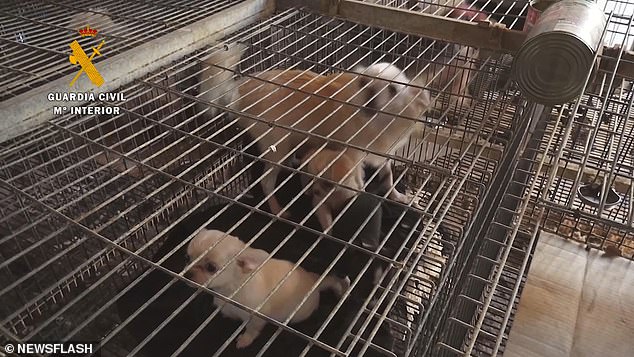 Some cages, which were meant for rabbits, contained mothers with their puppies with barely any space to move around, and without sufficient access to food or water 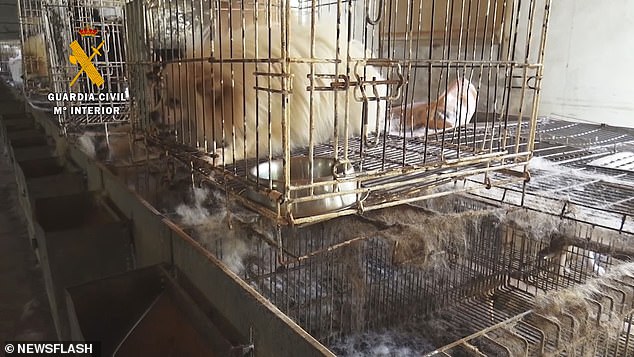 The cages were shown stacked on top of each other, with matted fur from the dogs falling down into the cages below 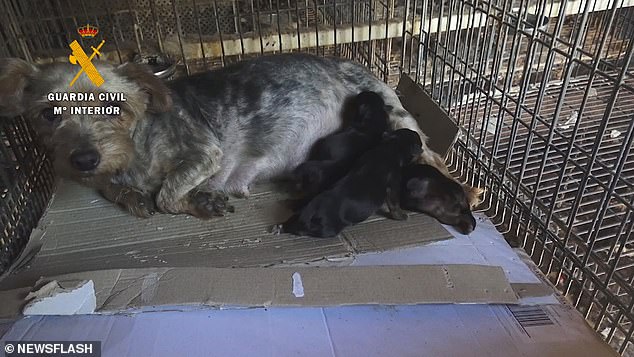 There were no proper facilities to clean the dogs, which were left in cages that were contaminated with urine and faeces, without access to enough food and water. Pictured: A mother dog with her newborn puppies in a cage, with just cardboard to lay on

When SEPRONA arrived at the farm they found the 544 dogs which included breeds such as the Bichon Frise, Maltese, Poodle, Yorkshire Terrier, Pomeranian, Chihuahua, Shih Tzu and Gos Rater Valencia.

In the video, as investigators approach, malnourished dogs can be seen barking and jumping in the confines of their cages, seemingly desperate to be released, or excited to see people there to help.

Some dogs that have been set free from their cages and are shown running around outside the farm building at the feet of the investigating officers. 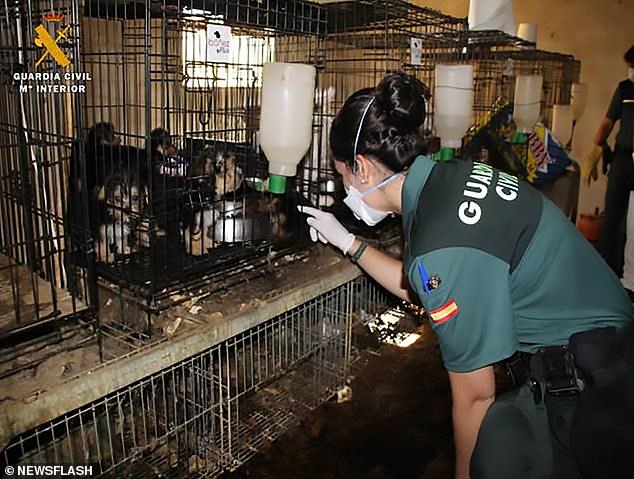 The Nature Protection Service (SEPRONA) of the Spanish Civil Guard found 544 dogs on the farm, of which 294 were adults and 250 were puppies, with 161 of the adults not having been micro-chipped 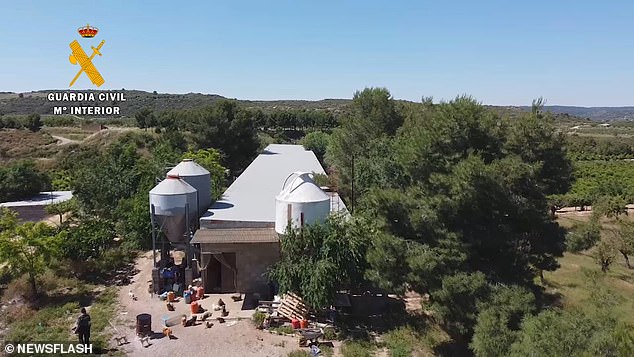 The farm used to be for rabbits, but had been converted into an illegal dog breeding farm by a British man and a Romanian woman. Pictured: An aerial shot of the farm taken by a drone operated by the Guardia Civil. Dogs can be seen roaming around outside of the farm building

The officers found the dogs in the cages, which were meant for rabbits, whilst others were in areas of the farm where faeces and dirt covered the ground.

The dogs were reportedly suffering from a lack of water and food, with the Spanish Civil Guard saying they were also affected by a lack of veterinary attention.

A foul smell reportedly hung over the farm and the investigators reportedly found a metal drum full of ashes where animal bones and the body of a recently-burnt puppy were found. 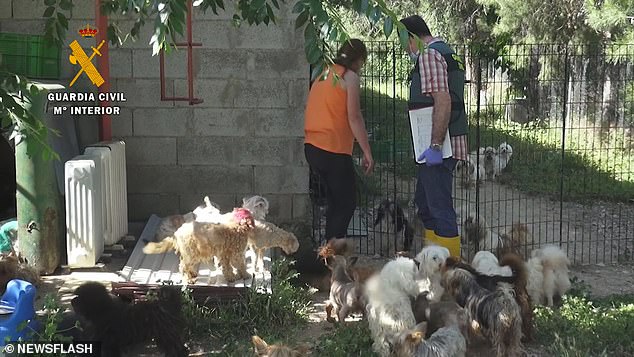 Outside of the building, hundreds of dogs could be seen running around as inspecting officers investigated the extent of the farm 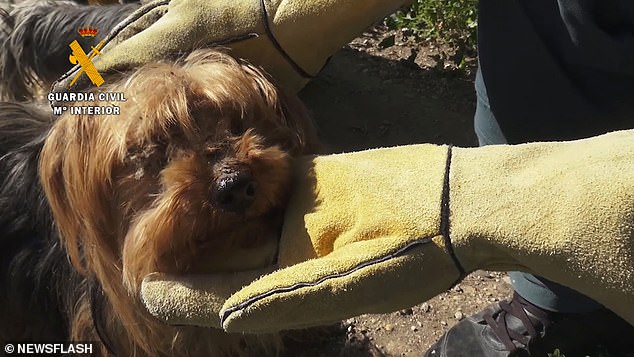 One dog shown in the video, a Yorkshire Terrier, had hair so badly matted over its eyes that it could not see (pictured). The officer in the video was shown trying to clear its vision 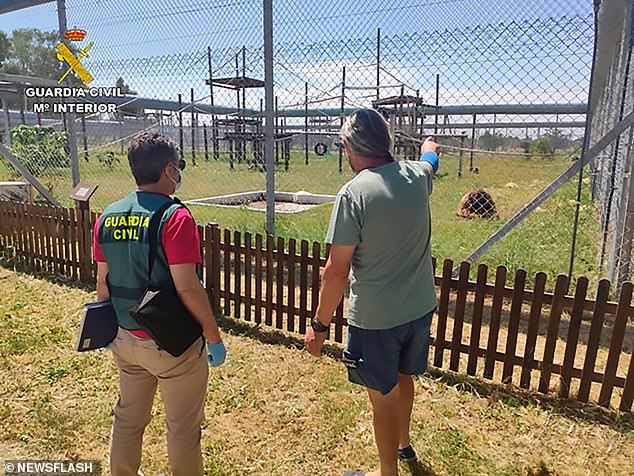 Pictured: Two Guardia Civil officers inspect the farm where the dogs were found. They also found a metal drum full of ashes where animal bones and the body of a recently-burnt puppy were found

The Guard also found a variety of veterinary drugs, many of which were out of date, which in any case could only legally be used by a professional.

The British man and Romanian woman, whose names have not been revealed, have been charged with alleged animal abuse.

The farm reportedly did not have the correct documentation to work in breeding and the authorities are yet to decide on the future of the rescued dogs.

It is unclear if the suspects have been detained as the investigation continues.

Yes, you CAN look 10 years younger in three hours

Mystery surrounds the death of a woman found head-first stuck inside...

Yes, you CAN look 10 years younger in three hours

Coronavirus has killed 1-in-16 care home residents in England and Wales,...