Thousands of peaceful demonstrators have taken to the streets of New York City for a sixth night of protests – this time gathering outside Mayor Bill de Blasio’s residence Gracie Mansion.

A silent protest was scheduled for 7pm Wednesday evening, just one hour before the city’s 8pm curfew goes into effect.

Demonstrators marched towards the Upper East Side before arriving at the mayoral residence in Carl Schurz Park, where they sat on the ground and observed 30 minutes of silence in honor of George Floyd.

As protesters marched in, NYPD officers lined the streets and cut off entry to most parts of the park near the mayor’s home, forcing many to squeeze onto East End Ave and E 86th street instead, Gothamist reported. 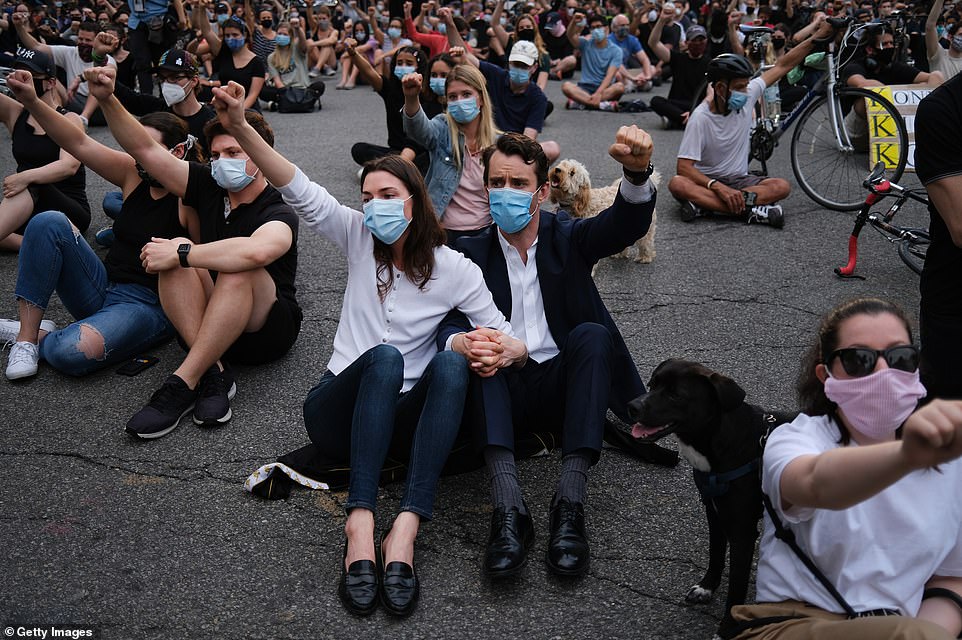 The silent protest was planned for 7pm on Wednesday evening, just one hour before the city curfew went into effect 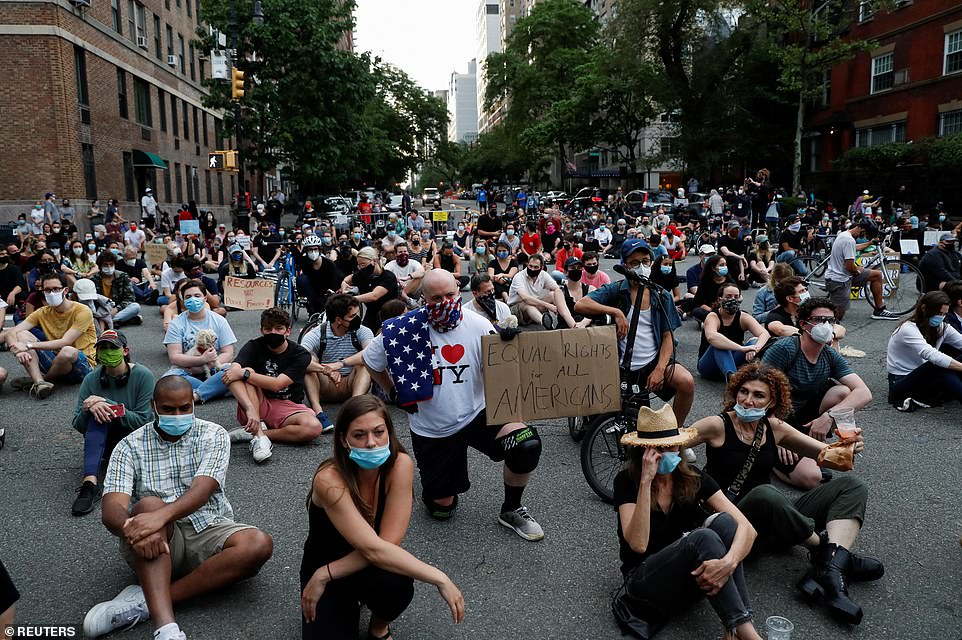 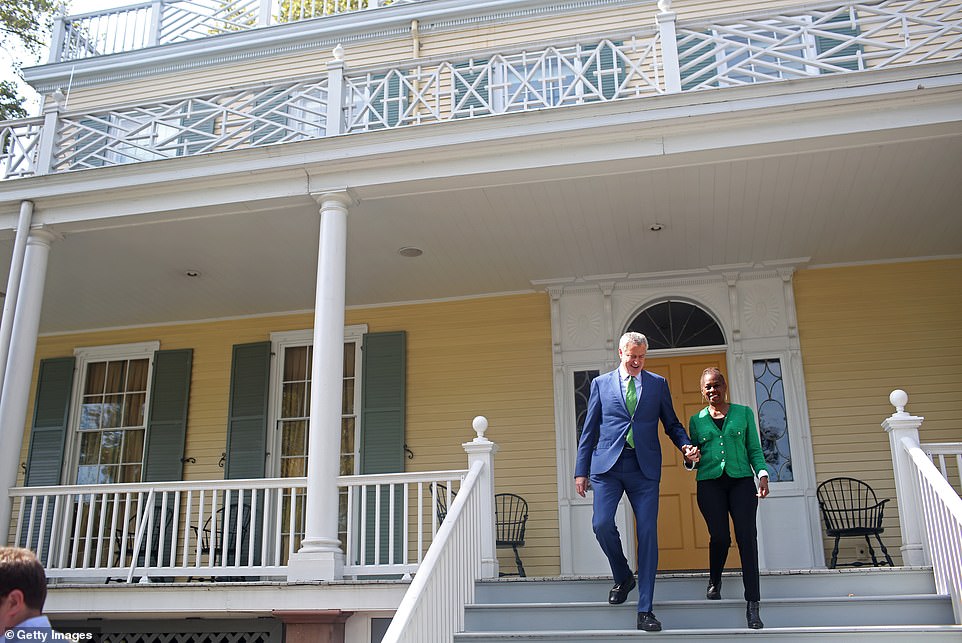 By the time crowds arrived, NYPD had cut off access to much of the park near Gracie Mansion, where Mayor de Blasio and his wife live (2019 stock photo)

Videos shared on social media showed crowds sitting or kneeling in silence with only the sound of birds chirping and helicopters circling above filling the air.

At the end of the half hour, protesters broke out in cheers and chants.

As curfew came into effect at 8pm, hundreds exited the area and continued marching southbound, as police trailed behind.

It is unknown if Mayor de Blasio was at the residence at the time however, as 8pm approached, he took to Twitter to tell residents on the streets to go home.

‘Last night had its challenges, but we saw real progress from Monday and our city was safer for it. Help us keep it up. It’s 8 PM and a citywide curfew is in effect. It’s time to head home,’ he said.

It comes after thousands of people ignored the city’s newly-imposed curfew on Tuesday night which had been moved forward from 11pm the night before in a bid to help curb violence and looting that have wreaked havoc on the streets since Friday.

In a no-nonsense crackdown, NYPD officers arrested 280 people across the city, although it is unclear if it was for violating the curfew or for other offenses, like looting or violence. 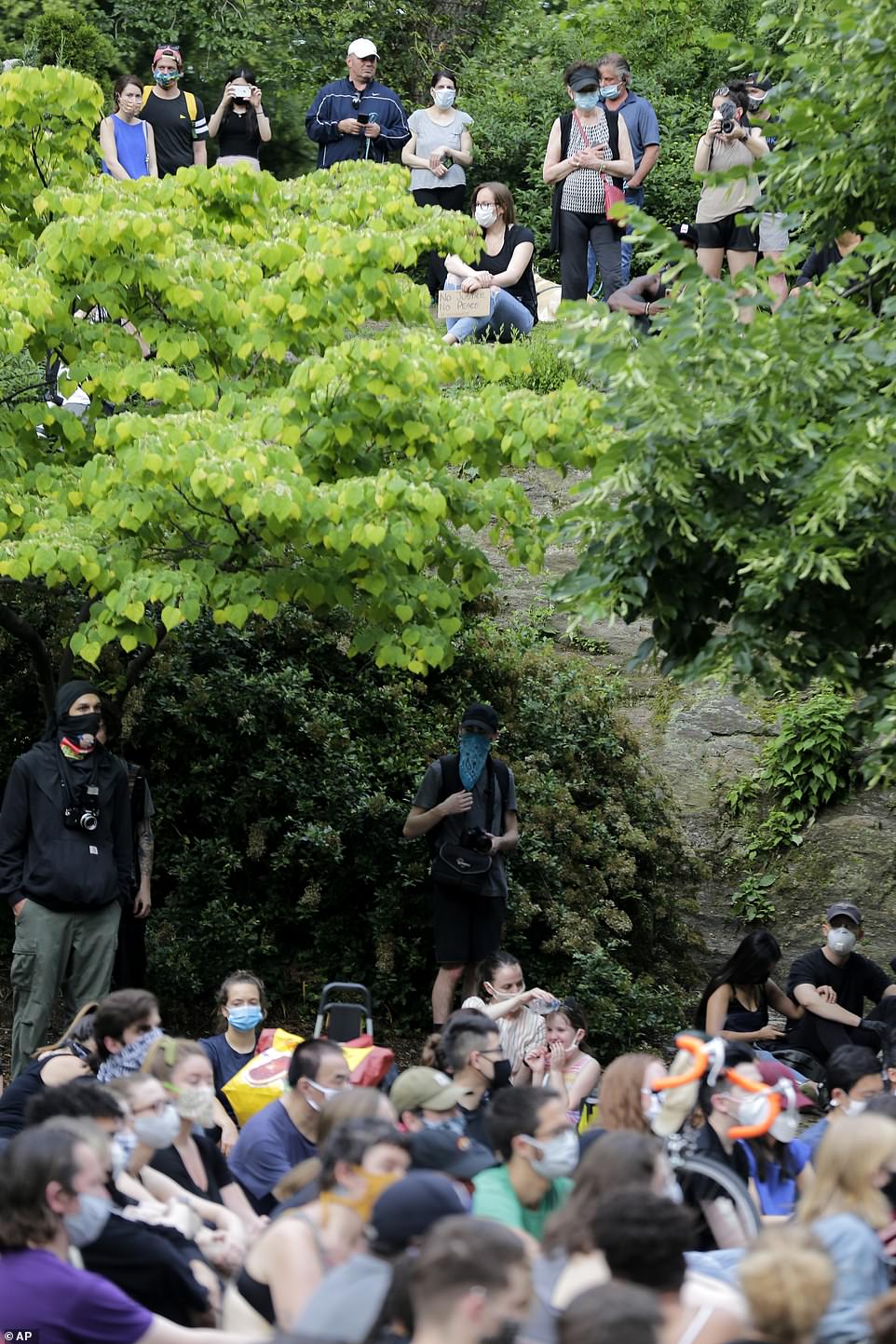 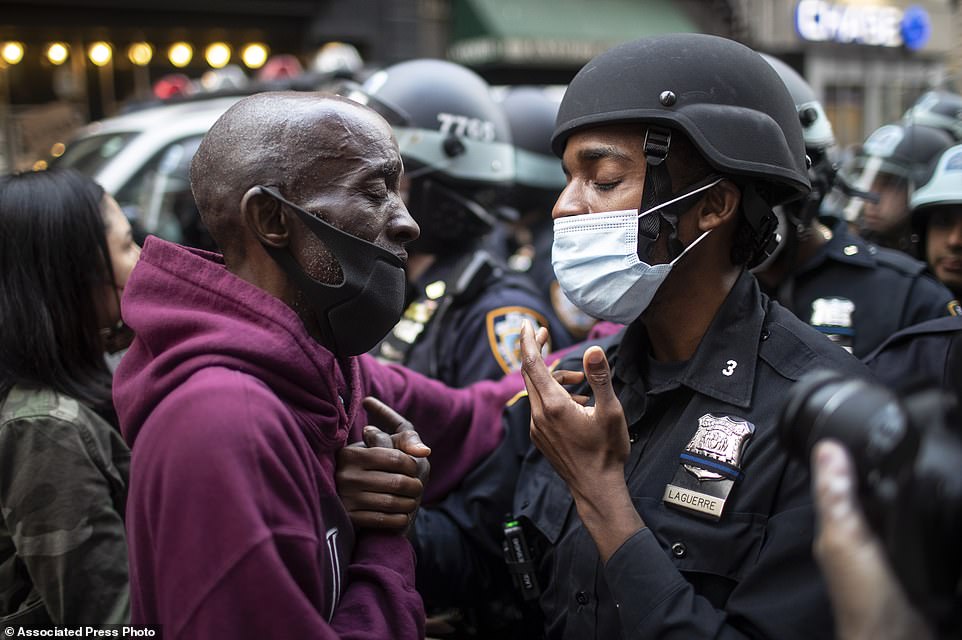 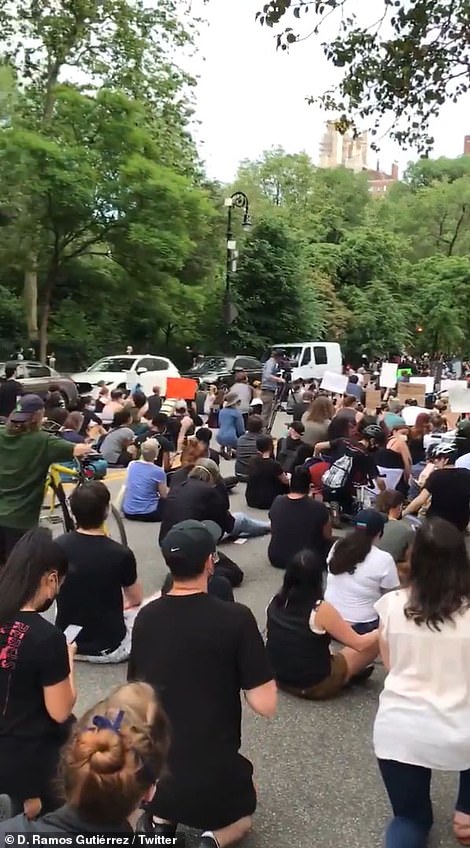 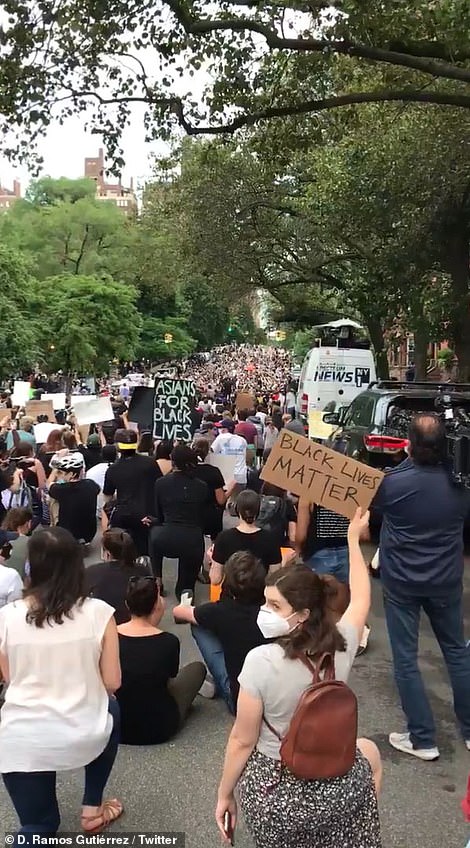 In videos shared on social media, only the sounds of birds chirping and helicopters hovering above filled the air

One hour into the curfew, officers also cut off access to the Manhattan Bridge, leaving 5,000 protesters who were marching towards the island stranded for two hours.

Despite the mayhem, Tuesday’s protests proved to be much calmer than the previous night’s demonstrations which saw more than 700 people arrested.

Mayor Bill de Blasio said on Wednesday that the situation overnight was a vast improvement on the previous 48 hours.

Trump claimed on Tuesday that the city was ‘totally out of control’ and on Wednesday he said the National Guard was ‘ready’.

Governor Cuomo was hesitant to call in the National Guard as was de Blasio. They both said the NYPD could handle it in a better way.

On Wednesday, Cuomo said: ‘New York City last night was much better. The police officers had the resources and capacity to do their jobs. The results last night were much, much better than the night before. 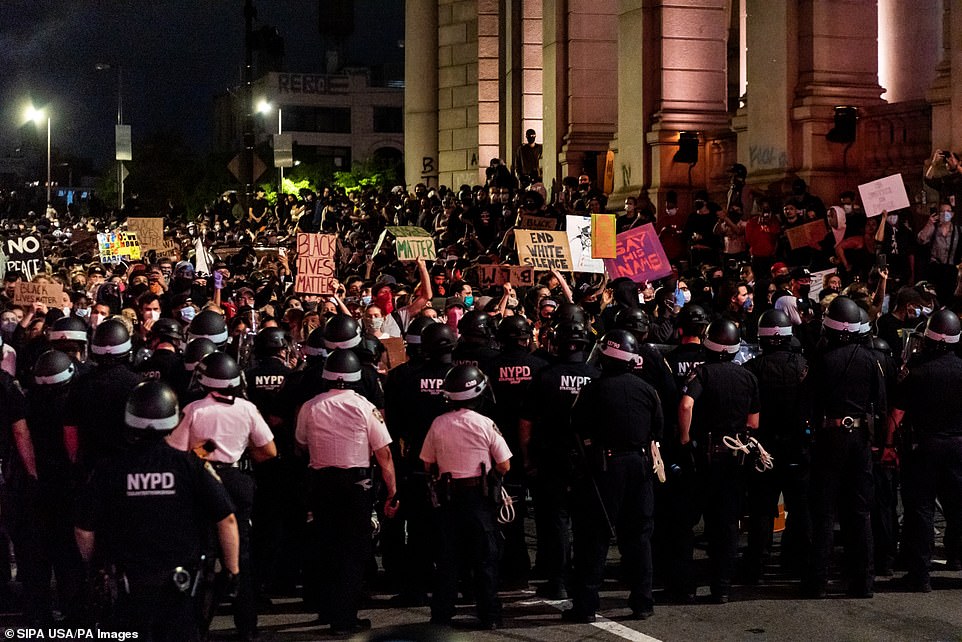 The NYPD stopped 5,000 protesters from entering Manhattan by blocking them on the Manhattan Bridge on Tuesday night. The protesters retreated after 2 hours 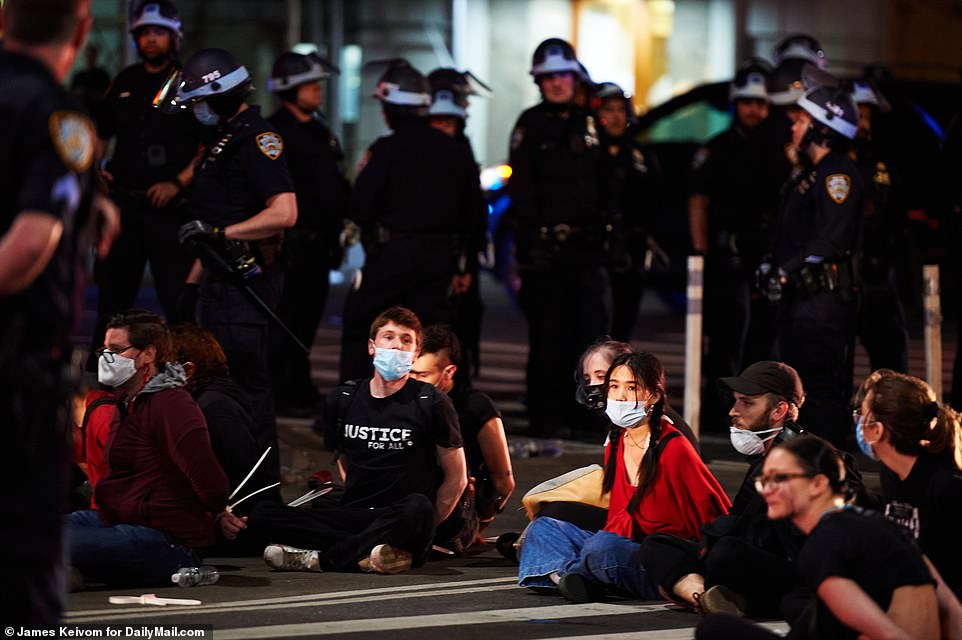 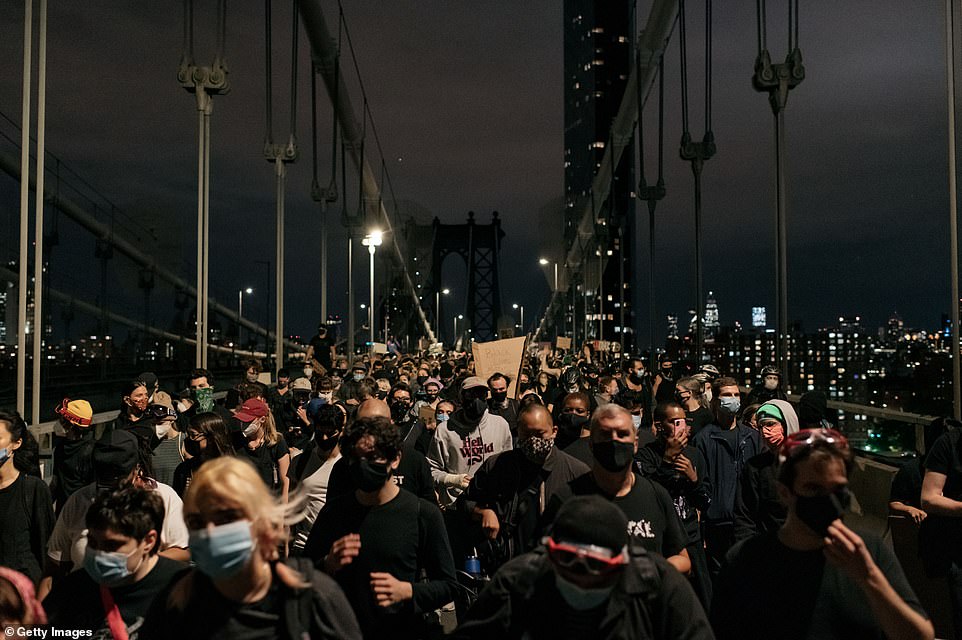 ‘The people of New York City should feel much better today than they did after the night of looting.’

The calmer scenes in New York City were echoed across much of America where protesters once again turned out in force but the confrontations with police were subdued and widespread rioting was limited.

It followed a day of anger from President Trump’s critics over the way he threatened to deploy the military to quell riots across the US and cleared protesters in Washington DC so he could visit damaged St John’s Episcopal Church.

The curfew, barring people from streets citywide and nonessential vehicles from part of Manhattan from 8 p.m. to 5 a.m., was imposed to prevent the nighttime chaos that followed peaceful protests for several days in a row.

Around Manhattan, even in parts of the city that hadn’t seen the damage and thefts, businesses had boarded up windows as precautions.

Vandalism and pilfering didn’t stop completely Tuesday. Some shops had windows smashed and merchandise taken. But it was a contrast from the previous two days, when several Manhattan shopping districts and one in the Bronx were overrun with people – some with crowbars and clubs – who ransacked numerous shops and set fires.

MARKET REPORT: Travel firms take off as Britons book trips to the Med

Age-defying Sonia Kruger shows off her incredible figure in activewear

KFC reopens some branches as takeaways and looks to expand this after closing down...

Beirut port blast comes amid rising tensions between Lebanon and its...

Face masks are too dangerous for children under two, Japanese experts...

Savers will suffer after grim day for landlords