Snapchat stopped promoting Donald Trump on its Discover page after he tweeted comments that some claim glorified violence amid nationwide racial justice riots.

A spokesperson for the picture messaging social media app told Axios in a Wednesday report that the outlet doesn’t want to boost rhetoric that promotes ‘racial violence and injustice’ which it says includes President Trump.

‘We are not currently promoting the President’s content on Snapchat’s Discover platform,’ a spokesperson for Snap said, adding that Trump’s account will not be taken down.

Instead of appearing in the ‘For You’ section, where it prompts viewers to click on and watch various news sites, public figures, initiatives and businesses’ video and picture stories, users will now need to specifically search for Donald Trump’s account.

‘We will not amplify voices who incite racial violence and injustice by giving them free promotion on Discover,’ the spokesperson continued.

‘Racial violence and injustice have no place in our society and we stand together with all who seek peace, love, equality, and justice in America.’

Trump’s campaign responded to the move by claiming Snapchat is trying to ‘rig the 2020 election’ by ‘illegally’ promoting Joe Biden while silencing the president who, in part, promotes his reelection efforts through his app. 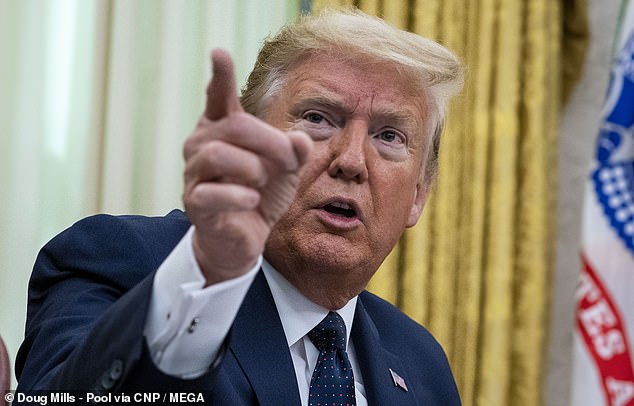 ‘We will not amplify voices who incite racial violence and injustice by giving them free promotion on Discover,’ a spokesperson for the app told Axios regarding Trump’s account 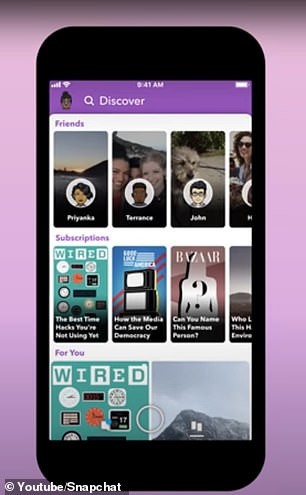 The discover page is curated for each user by content editors for Snapchat and includes picture and video stories from news outlets, celebrities, public figures and businesses

‘Radical Snapchat CEO Evan Spiegel would rather promote extreme left riot videos and encourage their users to destroy America than share the positive words of unity, justice, and law and order from our President,’ he continued.

The decision came after Trump made posts on Twitter suggesting violence and ‘domination’ against those rioting in cities across the country over George Floyd’s death.

It’s also a move that goes further than any other social media platform has gone in pushing back against the president’s accounts and content.

Other platforms make decisions on a case-by-case basis depending on the post.

Twitter, for the first time ever, flagged two of Trump’s tweets regarding mail-in voting last month as ‘misleading,’ and prompted users to visit a page where they could read more about mail-in ballots.

Facebook founder and CEO Mark Zuckerberg said during an interview shortly after the tweets were flagged to accuse Twitter of being the ‘arbiter of truth,’ and said his platform would not be acting in the same manner.

Trump accuses Twitter of trying to interfere in the 2020 elections and of ‘totally silencing conservative voices.’

Twitter’s action against the president prompted Trump to sign an executive order regarding social media and other Republican lawmakers to propose legislation that would remove federal protections from social media websites that seek to fact-check their users’ posts. 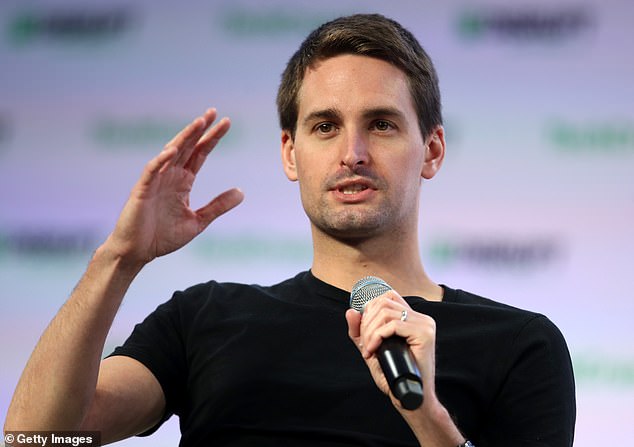 Trump’s campaign responded by claiming ‘Snapchat CEO Evan Spiegel (pictured) would rather promote extreme left riot videos and encourage their users to destroy America than share the positive words of unity, justice, and law and order from our President’

Snap CEO posted a memo online Sunday explaining how editors make the decision on what to curate and promote for users in the Discover section, and added it will allow ‘divisive people’ to keep their accounts, but will no longer make them forward facing on the app.

‘Our Discover content platform is a curated platform, where we decide what we promote,’ Evan Spiegel wrote. ‘We have spoken time and again about working hard to make a positive impact, and we will walk the talk with the content we promote on Snapchat.’

‘[Snapchat] may continue to allow divisive people to maintain an account on Snapchat, as long as the content that is published on Snapchat is consistent with our community guidelines, but we will not promote that account or content in any way,’ the memo continued.

Snapchat, in the past, has taken accounts off of Discover if it has multiple violations of the app’s guidelines or has received several reports from users regarding that account.

Decided to remove the promotion of an account for out-of-app behavior is not in line with Snap’s usual policies and procedures.

What tier are YOU in and why? Document attempts to explain curbs in each area of England

Woman smashes hundreds of bottles of alcohol in Stevenage Aldi

What tier are YOU in and why? Document attempts to explain...

Woman smashes hundreds of bottles of alcohol in Stevenage Aldi

Debenhams will slash 2,500 store and warehouse jobs to cut costs