A woman who had 16 brain tumours admits she thought her headaches and sleepless nights were down to her being a new mother.

Lisa Shurety, 39, from Waltham Abbey, Essex, was given just five months to live when cancerous tumours were discovered in her brain, pelvis and lungs after she collapsed in February 2018.

The mother-of-two was diagnosed with melanoma in 2011 and had a cancerous mole from her back removed – but seven years later doctors found that the cancer had spread.

Since then, Lisa has had three major brain surgeries plus radiotherapy and other medical procedures which have resulted in severe nerve damage and left her bedridden most days.

Sadly, the struggle isn’t over for Lisa, as she’s now raising £100,000 for further treatment – which is not yet available on the NHS – to reduce the size of even more tumours in her brain.

Lisa Shurety, pictured with her family, who had 16 brain tumours admits she thought her headaches and sleepless nights were down to her being a new mother 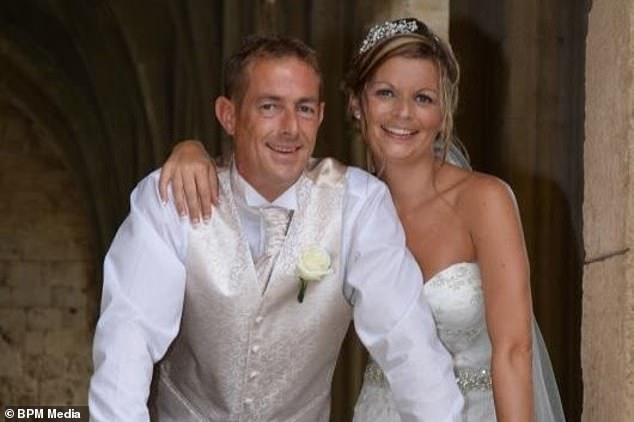 Lisa (pictured with her husband on their wedding day), 39, from Waltham Abbey, Essex, was given just five months to live when cancerous tumours were discovered in her brain, pelvis and lungs after she collapsed in February 2018

Lisa said she first put the persistent headaches and sluggishness down to being a new mother – having just given birth to Emily, now two, with her husband Paul.

But on February 28, 2018, Lisa, who also has a ten-year-old daughter Megan, got up in the middle of the night searching for some painkillers – only to collapse a short while later.

‘Waking up in the night for feeds became the new norm,’ recalled Lisa. ‘When I was woken up by another headache, I just got up as usual to take painkillers. That’s the last thing I remember.

‘When I next opened my eyes, I had endured major brain surgery to remove a tumour. My prognosis was bleak – survival four to five months. Daily life became a struggle.’

Thankfully, Lisa survived longer than her prognosis but her problems kept coming. 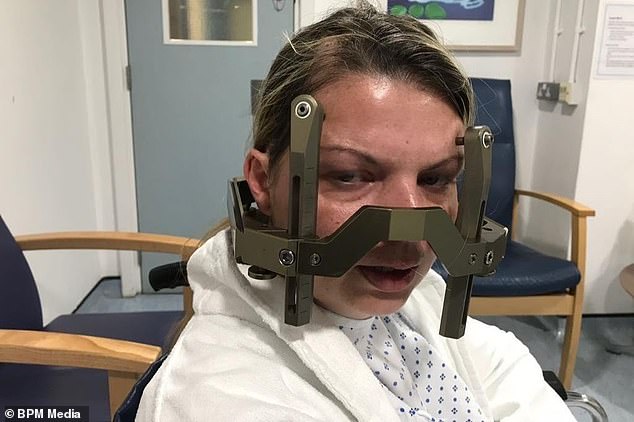 The mother-of-two was diagnosed with Melanoma in 2011 and had a cancerous mole from her back removed – but seven years later doctors found that the cancer had spread. Pictured: Lisa undergoing treatment 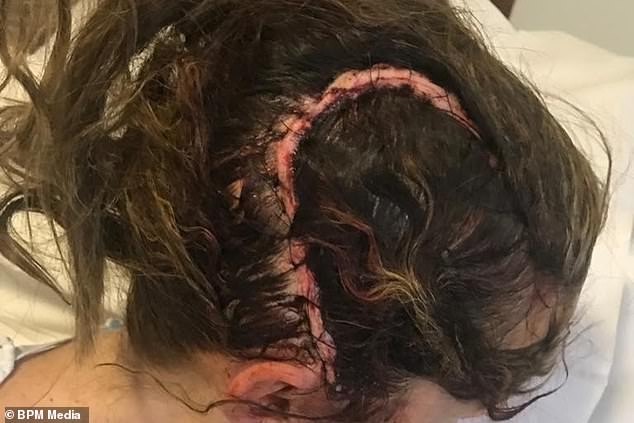 Lisa (pictured after surgery) said she first put the persistent headaches and sluggishness down to being a new mother – having just given birth to Emily, now two, with her husband Paul

Lisa admitted: ‘The following two-and-a-half years has just gone from bad to worse, with a total of 16 brain tumours and tumours in both my pelvis and lungs.

WHAT ARE THE SIGNS OF MELANOMA?

The earlier a melanoma is found, the easier it is to treat.

See your doctor straight away if you have a new mole or skin change. Or you have a mole that is:

If your melanoma has spread to other areas, you may have:

‘My left arm, hand and leg are severely damaged as a consequence of the brain tumours and nerve damage during surgery to the tumour on my pelvis. Daily life is a struggle and I need 24/7 care and support.

‘My home has had to be modified to allow me to get about easily, and most days I spend in bed either dealing with ill health or coping with treatment.’

In 2011, doctors removed a cancerous mole from Lisa’s back, but seven years later she realised the cancer had spread to her brain.

Lisa said: ‘I had no idea and was not warned that Melanoma from a mole could spread and cause the devastation that it has.’

Despite her ordeal, Lisa has carried on and thanked those closest to her for helping her to do so.

She said: ‘My battle goes on and my wonderful husband and beautiful daughters are my motivation and dedication to fight this horrific disease.’

Lisa’s next treatment will involve shrinking three more of her brain tumours and five new ones in her lungs – but the procedure isn’t available on the NHS so Lisa will have to pay at least £100,000 to get it done privately.

The family have set up a fundraising page and so far £28,000 has been raised.

Lisa said: ‘Without this treatment – which is not available via the NHS – my chance of beating this horrific disease isn’t likely. I just can’t bear to think I won’t be with [my family] for much longer.

‘Every birthday and Christmas since I have been diagnosed, I wonder if this is the last one they will have with me.

‘My heart bleeds when I look at my beautiful family. I love them so much I just can’t bear to think I won’t be with them for much longer.

‘They have been punished enough over the past two-and-a-half years with me not being able and not being around much. They don’t deserve any more pain.

WHAT IS MELANOMA AND HOW CAN YOU PREVENT IT?

Melanoma is the most dangerous form of skin cancer. It happens after the DNA in skin cells is damaged (typically due to harmful UV rays) and then not repaired so it triggers mutations that can form malignant tumors.

Around 15,900 new cases occur every year in the UK, with 2,285 Britons dying from the disease in 2016, according to Cancer Research UK statistics.

The patient can decide to use a skin graft if the surgery has left behind discoloration or an indent.

This is needed if the cancer reaches stage III or IV. That means that the cancerous cells have spread to the lymph nodes or other organs in the body.

THIRD of patients have put off visiting their GP as new...

Migrant whose journey from Sudan has ended at a converted Army...

How losing weight could be key to surviving Covid-19