Kim Zolciak is ‘so blessed’ to have husband of almost nine years, Kroy Biermann, by her side.

The reality star shared her gratitude for the former Atlanta Falcons player on Sunday by posting a sunny snap of the couple on a date night.

The picture shows Kroy holding up Kim’s leg as they pose for a sexy photo outside their Atlanta mansion.

So blessed! Kim Zolciak showed her gratitude for husband Kroy with this Instagram snap on Sunday

‘Feel so blessed to go through life with you @kroybiermann’ the mother-of-six wrote.

It appears the photo was taken last month when Kim celebrated her birthday with a romantic dinner with the former NFL player.

Kim, 42, was all dressed up in some skintight jeans and perspex heels.

She wore a white blouse with puffy sleeves and her voluminous blonde locks were styled in tumbling waves.

The couple married in November 2011 and have four children together; Kroy, 10, Kash, seven, and twins Kaia and Kane, six. 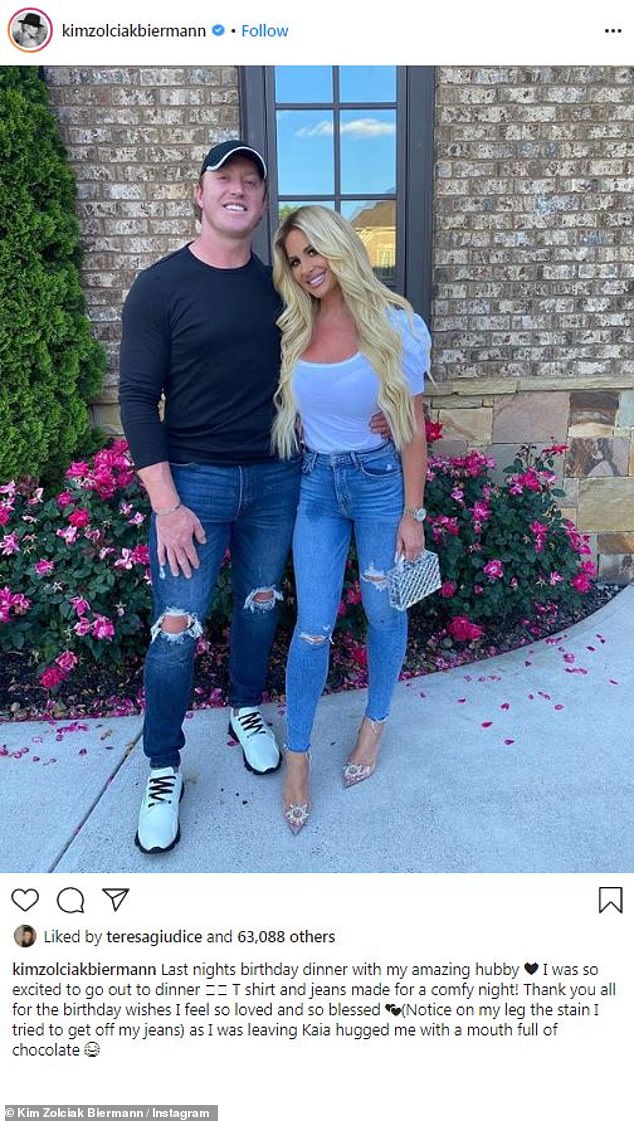 Meant to be: The snap appears to be a throwback photo from Kim’s birthday dinner last month 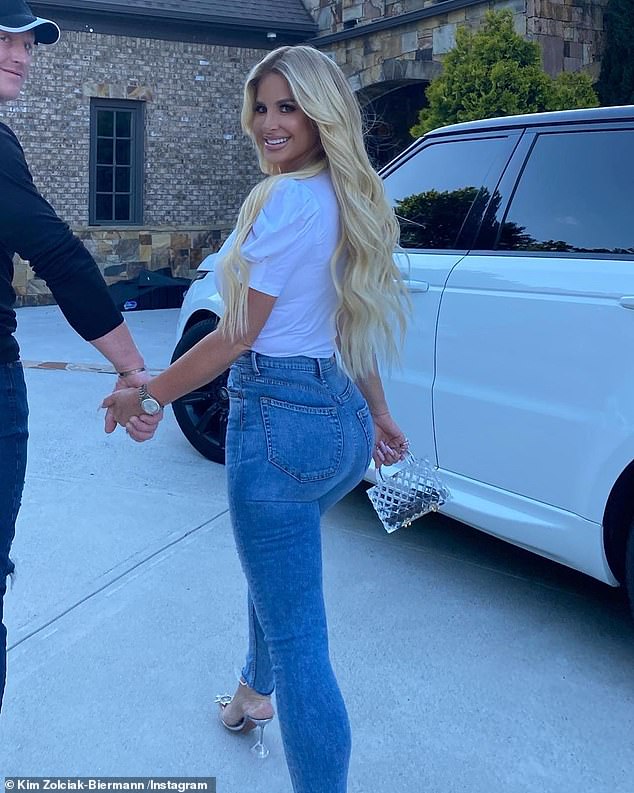 Romance: Kim also shared this snap from the birthday outing

In 2013 Kroy adopted Kim’s eldest daughters Brielle, 23, and Ariana, 18, from her previous relationship with Daniel Toce.

Meanwhile, Kim spoke out after being accused of photoshopping one of her swimsuit photos.

The Don’t Be Tardy star shared a sizzling snap of herself in one of her Salty K swimsuits.

A follower commented: ‘Kim sweetie the photoshopping is out of control.’ 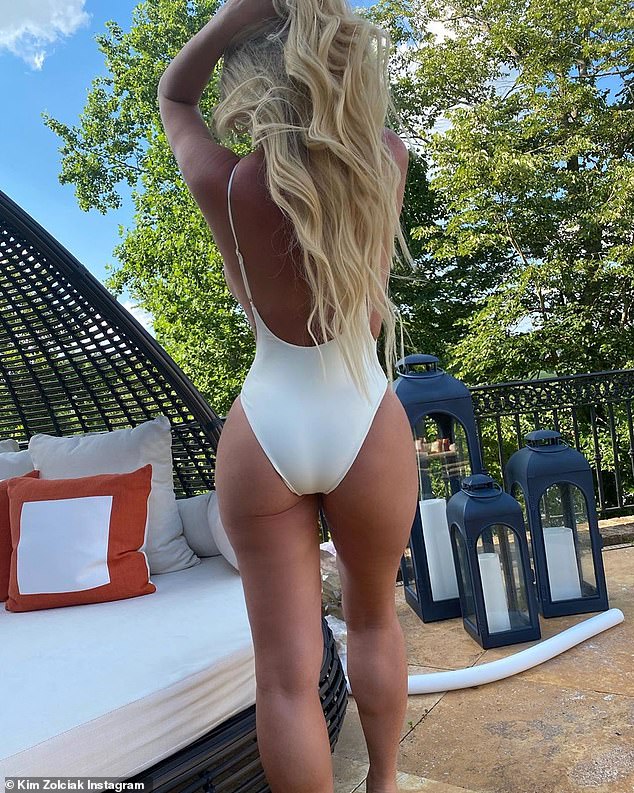 Cheeky: Kim again denied editing her photos after fans accused her of photoshopping this swimsuit snap 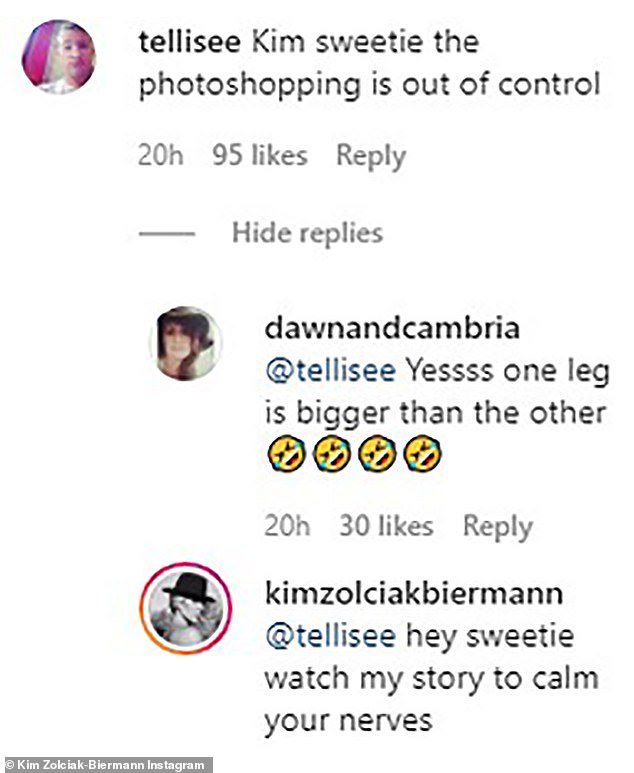 Back and forth: The 42-year-old defended herself against photoshopping accusations with this exchange on social media

Her Instagram Story featured a video of herself jumping on a trampoline to prove that it was actually her body.

Though the plunging bathing suit left little to the imagination, apparently it held up pretty well for Kim as she jumped beside her pool.

‘I told you guys it holds everything in! Wasn’t kidding!’ Kim rejoiced, before breaking out into a quick cheer.

She rattled off several of the suit’s other features in the caption.

‘Double lined thick, Italian luxury fabric, not transparent when wet,’ she wrote in bold font in the video. 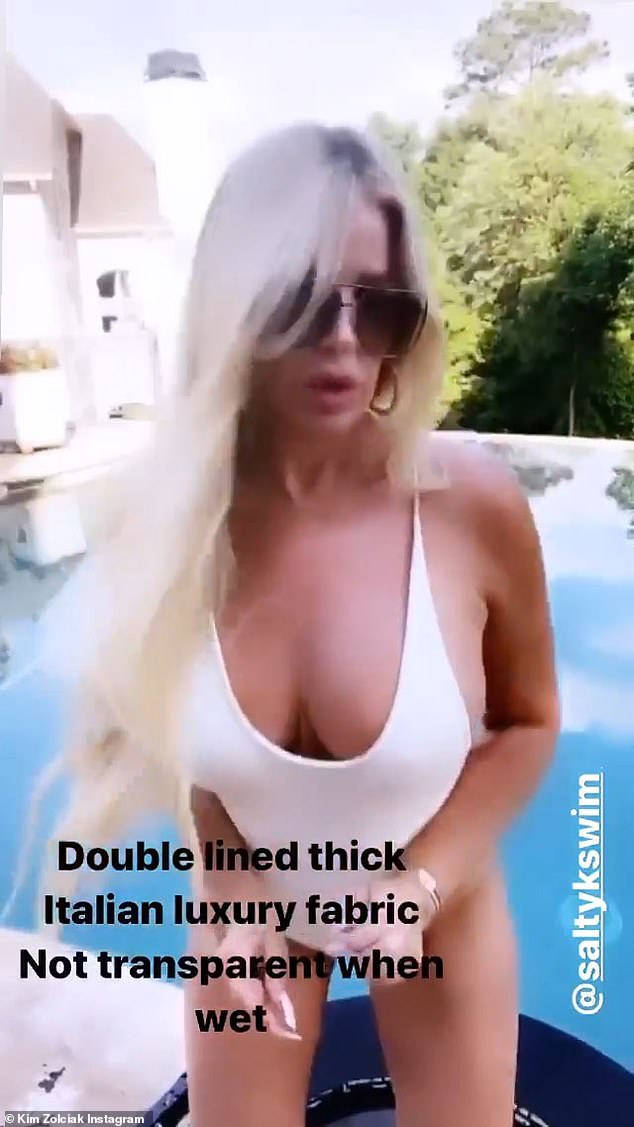 ‘I told you guys it holds everything in!’: To prove her point Zolciak shared a video of herself, jumping up and down a trampoline while clad in the itty bitty bathing suit on Wednesday 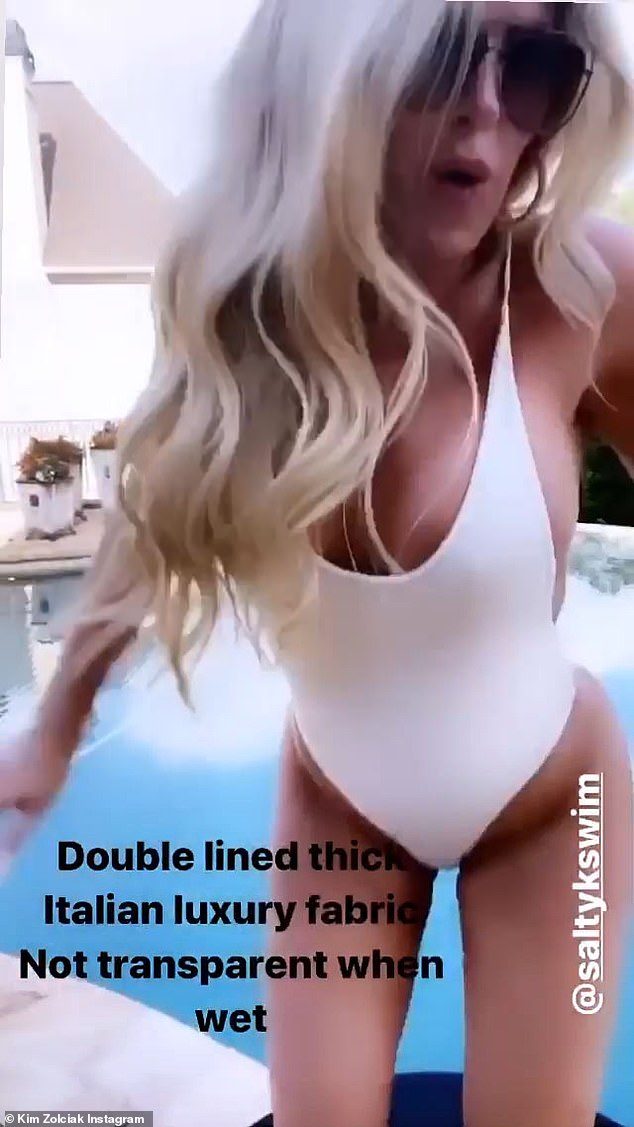 Glam: She wore large sunglasses and a glam pair of gold hoop earrings

The actress was overjoyed to announce her new range earlier this week, and gave her husband Kroy Bierrman a special shout-out for all his support.

‘Today is the Day,’ Kim wrote. ‘@saltykswim is launching at 3pm/EST I can’t wait!!! So many swimsuits will be coming your way this summer!!

‘A huge THANK YOU to my hubby who helped make my dream a reality. This would not have been possible without you @kroybiermann I love you to the moon and back a million times and I’m forever grateful for you! P.S. I know you guys will love the feel of my fabric #SaltyBabe.’

Pubs COULD be forced to close to offset reopening of schools, says Neil Ferguson

Coronavirus UK: Isle of Wight hospital to get supplies by drone

Pubs COULD be forced to close to offset reopening of schools,...

Jordan Ablett reveals she induced her labour so her mother could...