A St. Louis man was charged with murder in the death of retired police captain David Dorn, who was shot dead in front of a pawn shop by suspected looters last week.

Stephan Cannon, 24, has been charged with first-degree murder, burglary, robbery, armed criminal action and being a felon in possession of a firearm.

Jimmie Robinson, 27, was also arrested in the case. He was charged with armed criminal action, stealing and unlawful possession of a firearm and burglary.

Dorn’s body was found dead on a the sidewalk in front of Lee’s Pawn & Jewelry after trying to protect the shop from looters, according to St. Louis Circuit Attorney Kim Gardner.

Dorn, 77, was reportedly friend of the pawn shop’s owner and frequently checked on the business when alarms went off.

His death was initially streamed on Facebook Live, but footage has since been deleted.

Fox 2 Now reports that Cannon was one of several people who were seen on surveillance footage after entering the pawn shop and stealing TVs. 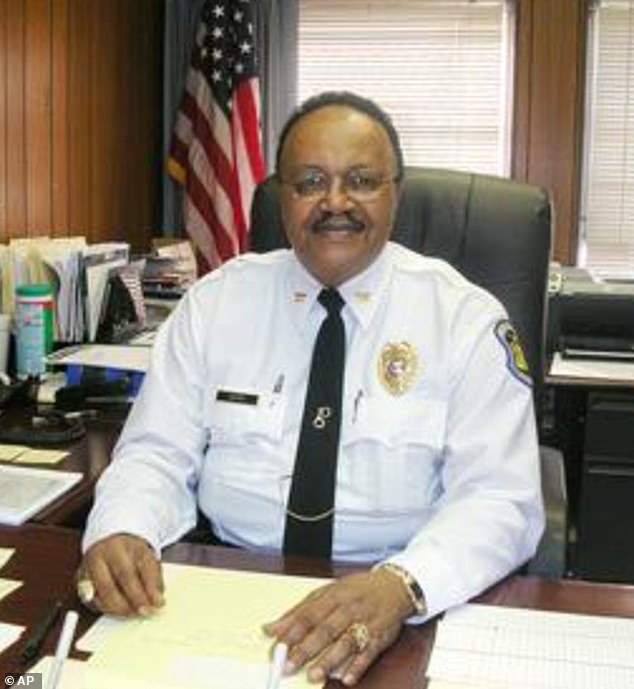 Cannon then reportedly walked towards the street corner with a gun in his hand.

‘At the time the shots were fired, (Cannon) was the only person standing at that corner,’ according to a probable cause statement obtained by New York Post.

‘Multiple plumes of smoke’ were allegedly seen coming from where Cannon was standing on the street corner and shell casings were later found.

Court documents revealed that Cannon acknowledged that he was inside the pawn shop the night of Dorn’s murder and that he cut his hair to change his appearance. 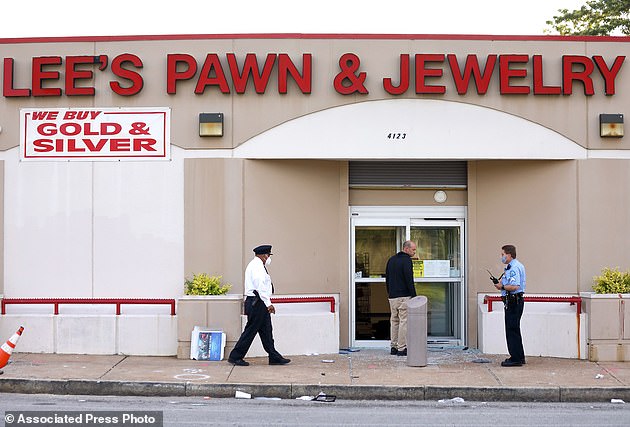 Police investigate the scene of a shooting at Lee’s Pawn & Jewelry in St. Louis on June 2 after Dorn was found shot dead 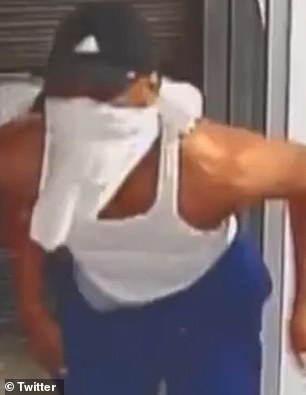 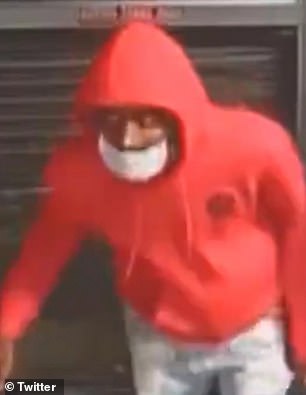 The St. Louis Police Department released surveillance footage taken inside the store shortly after 2.30am, in which seven persons of interests are seen entering through the pawn shop’s front door

A stolen TV p was found inside Cannon’s home and the serial number matched that of  Lee’s Pawn and Jewelry store.

Cannon also admitted he became aware that his photograph being distributed after local authorities released CCTV footage from the pawns shop.

CCTV footage also showed  Pontiac G6 pulled up alongside the store that night and reportedly showed Cannon entering with the driver. 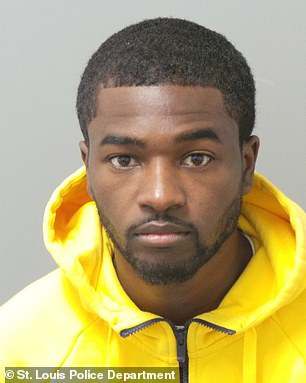 Jimmie Robinson (pictured in mugshot) was arrested for armed criminal action, stealing and unlawful possession of a firearm and burglary related to looting the night of Dorn’s death

Cannon is being held without bail. In a statement from Kim Gardner, she cited police work and public outrage as what helped locate Cannon.

‘Based upon the diligent work of the police department, collaboration with the Circuit Attorney’s Office, and the cooperation from the outraged community, we have issued charges for the tragic murder of former Captain David Dorn,’ she said.

The retired captain had served 38 years on the St. Louis police force before retiring in October 2007. He then became chief of Moline Acres, a small town north of St. Louis.

The Ethical Society of Police, which represents black officers in St. Louis, said in a news release that Dorn was ‘the type of brother that would’ve given his life to save them if he had to’.

One witness to the Facebook Live video said the incident had ‘sickened’ him.

Marquaello Futrell wrote: ‘The man just was shot and killed outside of Lee’s Pawn and Jewelry has me sick to my stomach.’ 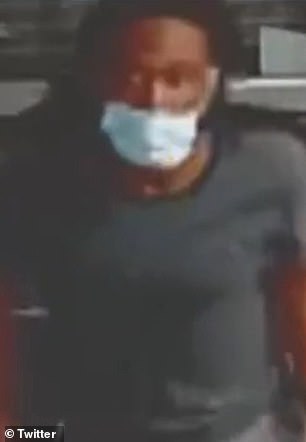 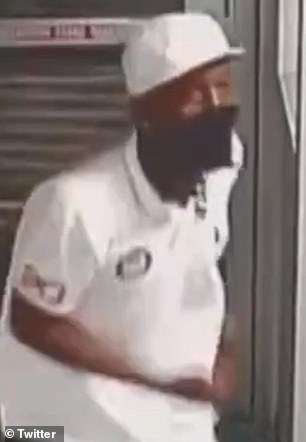 The St. Louis PD posted the video on Twitter, where they also stated they were offering a reward for those who had information on the men 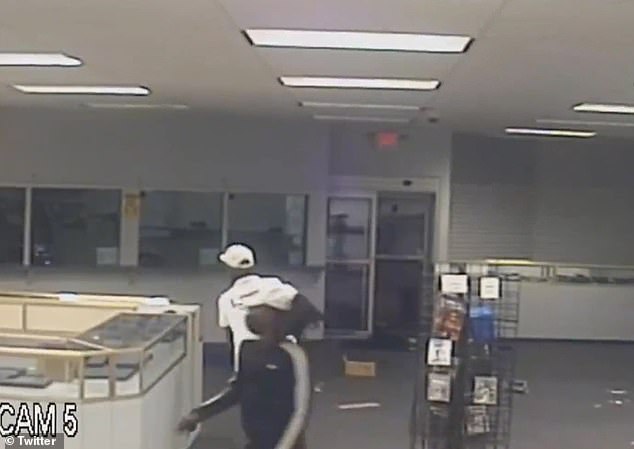 The store looks to have already been completely ransacked by the time the group arrived on the scene, with windows shattered, display cabinets emptied and trash discarded on the floor.

He suggested eyewitnesses did not help Dorn after he was shot, adding: ‘It’s one thing to be a victim of a robbery/assault but to lie in you own blood pleading for help and no help comes other than people standing around on FB Live recording his death. All over social media. I’m upset and can’t sleep!’

‘Many of us, the other officers, looked up to him,’ Hayden said. ‘Was very well-liked, very pleasant. And his wife still works here. So a very sad time for our agency. We will honor him.’

Tim Fitch, the former St. Louis County police chief called Dorn ‘a true public servant’, adding: ‘Protecting & serving all the way to the end. None of us who knew you are surprised you went out fighting at Lee’s Pawn this morning. God speed my friend.’ 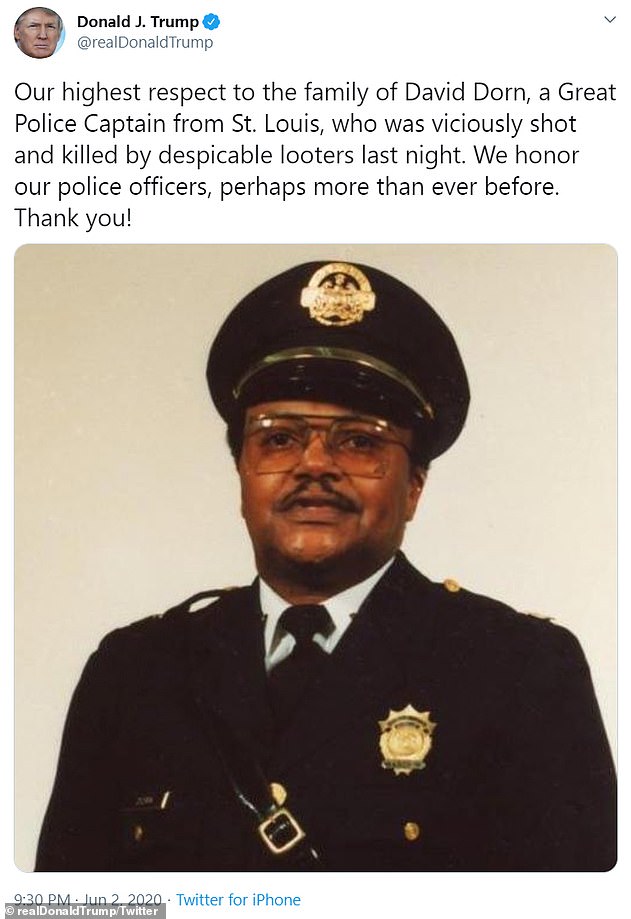 President Trump tweeted his own tribute Tuesday evening, writing: ‘Our highest respect to the family of David Dorn, a Great Police Captain from St. Louis, who was viciously shot and killed by despicable looters last night. We honor our police officers, perhaps more than ever before. Thank you!’

State Rep. Rasheen Aldridge, D-St. Louis, told the Post-Dispatch that he watched to Facebook Live post before it was removed.

‘Very traumatized right now,’ he said about an hour after the shooting occurred. ‘I´m hurting.’

President Trump also shared his own tribute for Dorn on Twitter last Tuesday.

”Our highest respect to the family of David Dorn, a Great Police Captain from St. Louis, who was viciously shot and killed by despicable looters last night,’ he wrote.

‘We honor our police officers, perhaps more than ever before.’

Trump was  later accused of weaponizing Dorn’s death as a political tool against Joe Biden, the presumptive democratic presidential nominee.

‘Why is Joe Biden silent about the cold blooded murder of Captain David Dorn? Does his life not matter to Joe because it doesn’t fit his leftwing narrative about the riots and looters?!?’ Trump Jr. had asked.

Trump replied to his son’s tweet with the word, ‘Disgraceful!’

Farmer Wants A Wife’s Neil Seaman reveals his tragic past

Carole Baskin reveals she had a ‘WIFE’ in the 80s just...

Farmer Adam ‘Moosa’ Symons arm is ripped off in a hay...