Actor Channing Tatum, back left, sits with actor Jamie Foxx during a funeral service for George Floyd at the church Tuesday 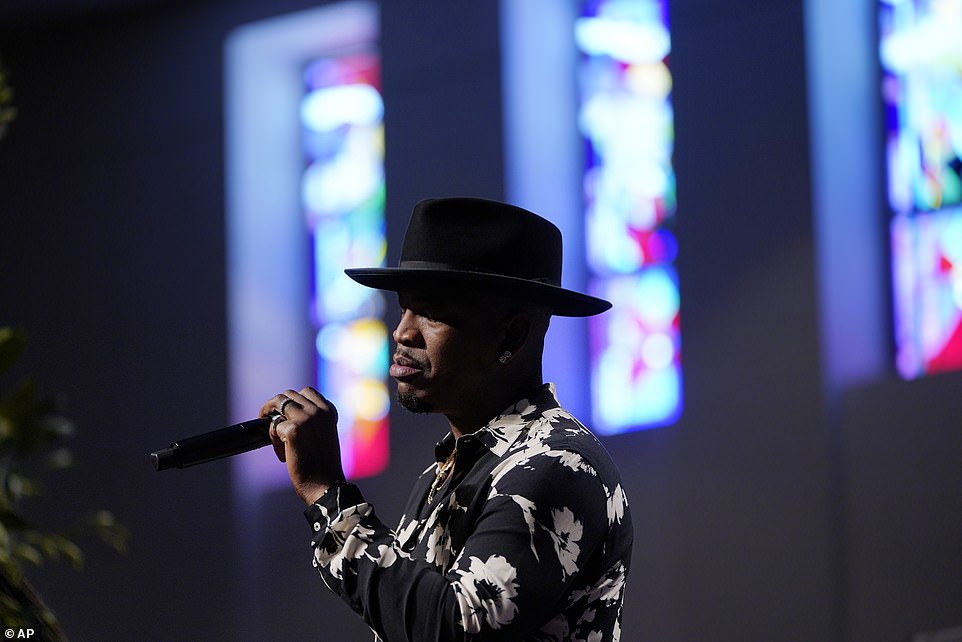 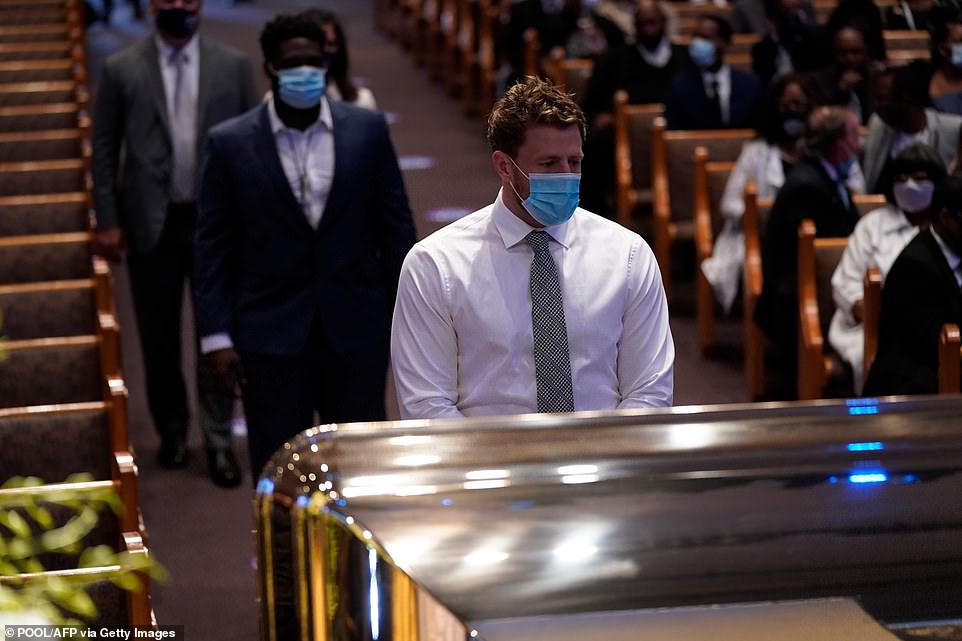 Houston Texans NFL player J. J. Watt, pauses by the casket of George Floyd on Tuesday at the Fountain of Praise church 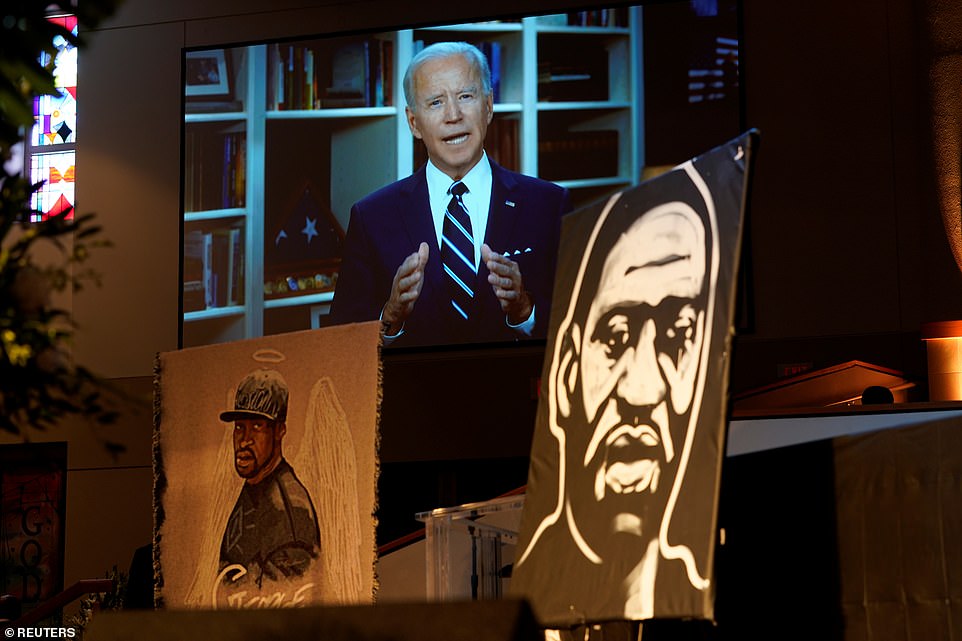 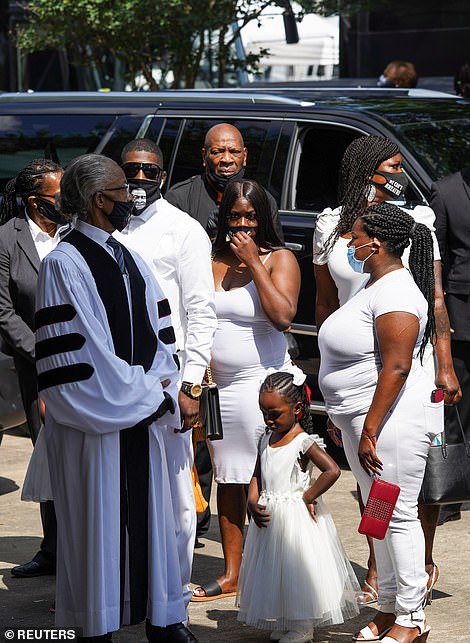 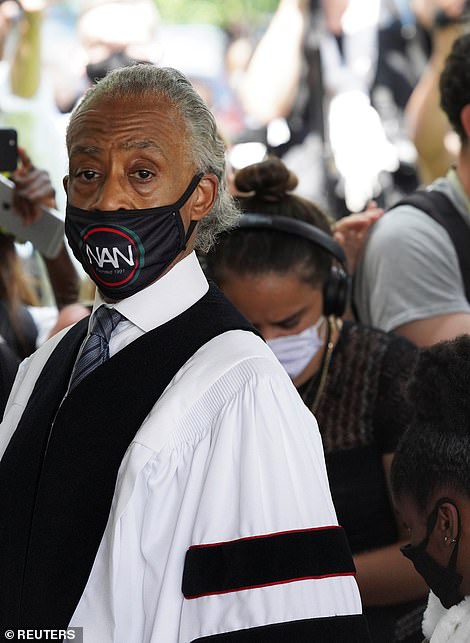 Reverend Al Sharpton is seen arriving at the funeral for George Floyd, whose death in Minneapolis police custody has sparked nationwide protests against racial inequality. He wore a face mask with the branding for his National Action Network

The service began with gospel music and Reverend Al Sharpton walking down the aisle with Floyd’s family’s members, all dressed in white to celebrate Floyd’s life.

Singer Ne-Yo cried as he did the family tribute.

The Grammy-winning singer said George Floyd´s death was a sacrifice that ‘changed the world’ before performing during his memorial service.

Ne-Yo shed tears on Tuesday while singing a rendition of G.C. Cameron’s ‘It’s So Hard to Say Goodbye to Yesterday.’ The singer paused on a few occasions to collect himself during his performance.

‘Fifty states are protesting at the same time,’ he said. ‘This man changed the world. He changed the world for the better. I would like to personally thank George Floyd for his sacrifice, so that my kids could be all right later on. I appreciate the sacrifice. I genuinely do.’

Dray Tate also performed Sam Cooke’s Change Is Gonna Come to a video montage of protests that have taken place around the world.

The families of Ahmaud Arbery, Botham Jean, and Eric Garner, other African Americans who have died in senseless incidents of brutality, also came to pay their respects. 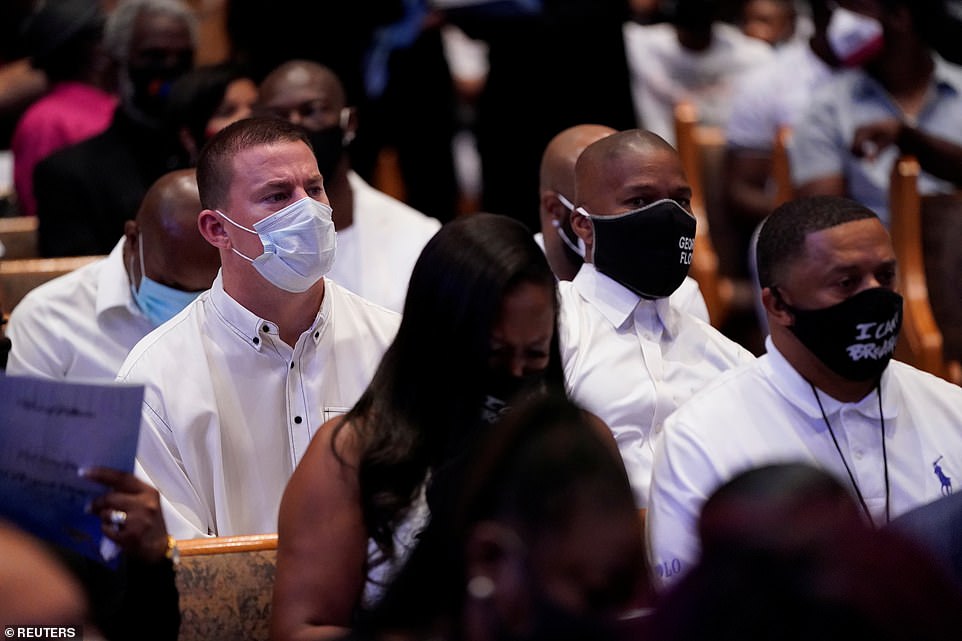 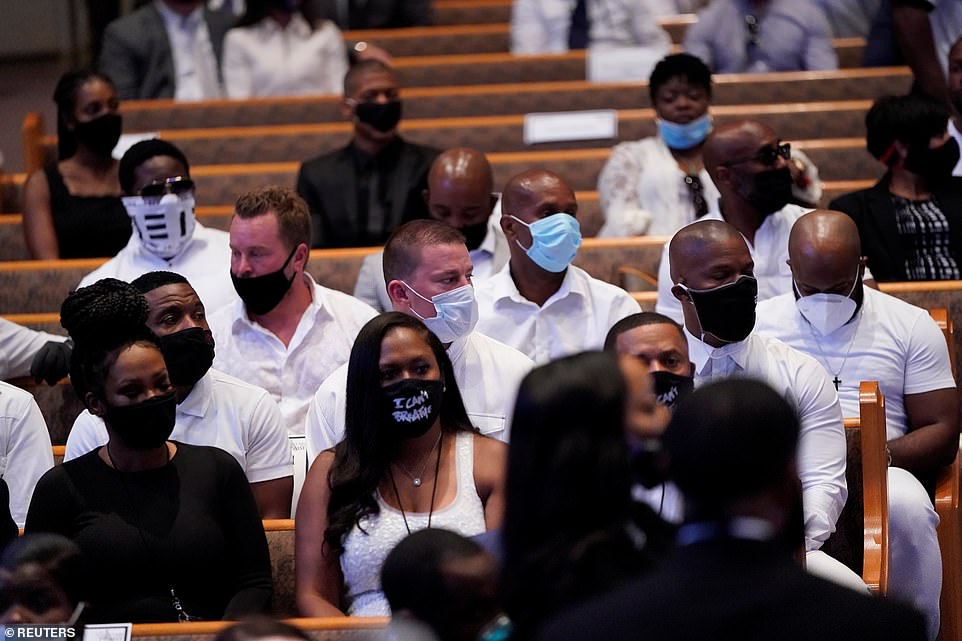 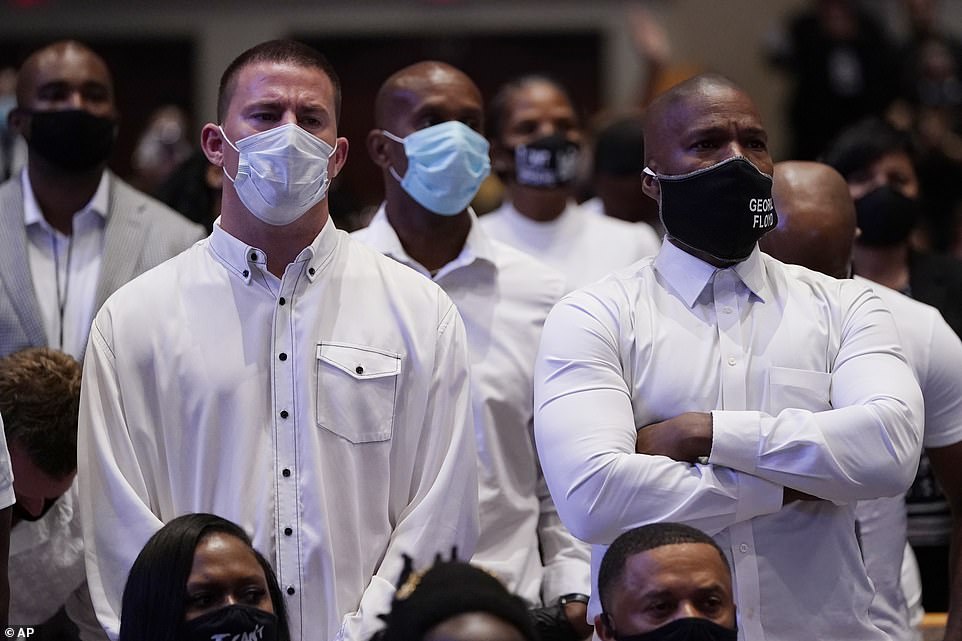 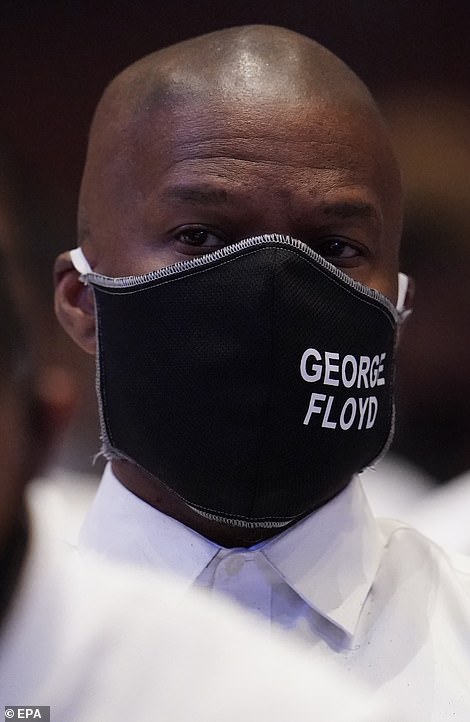 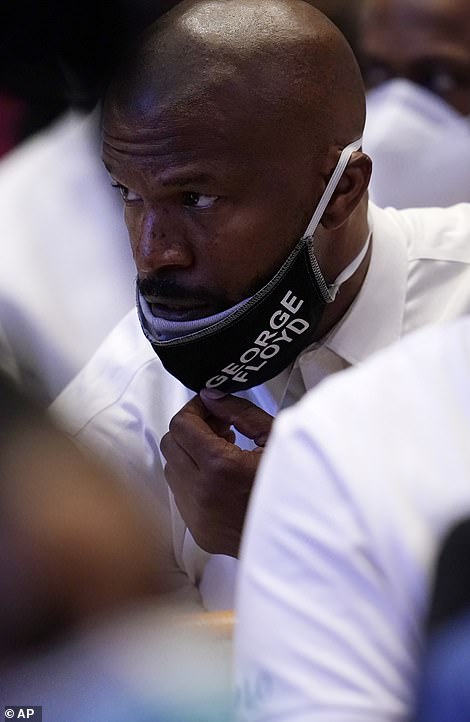 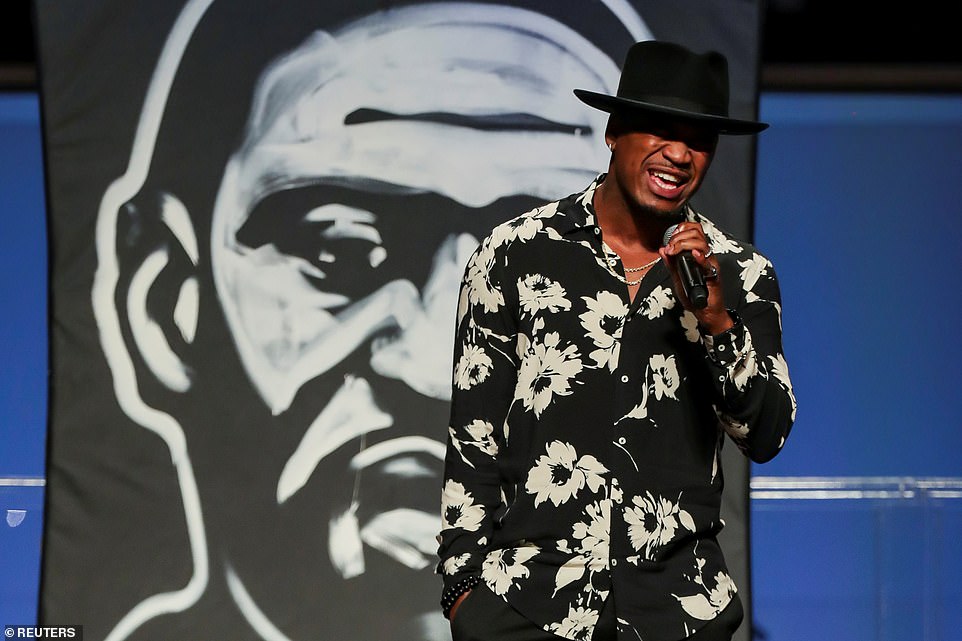 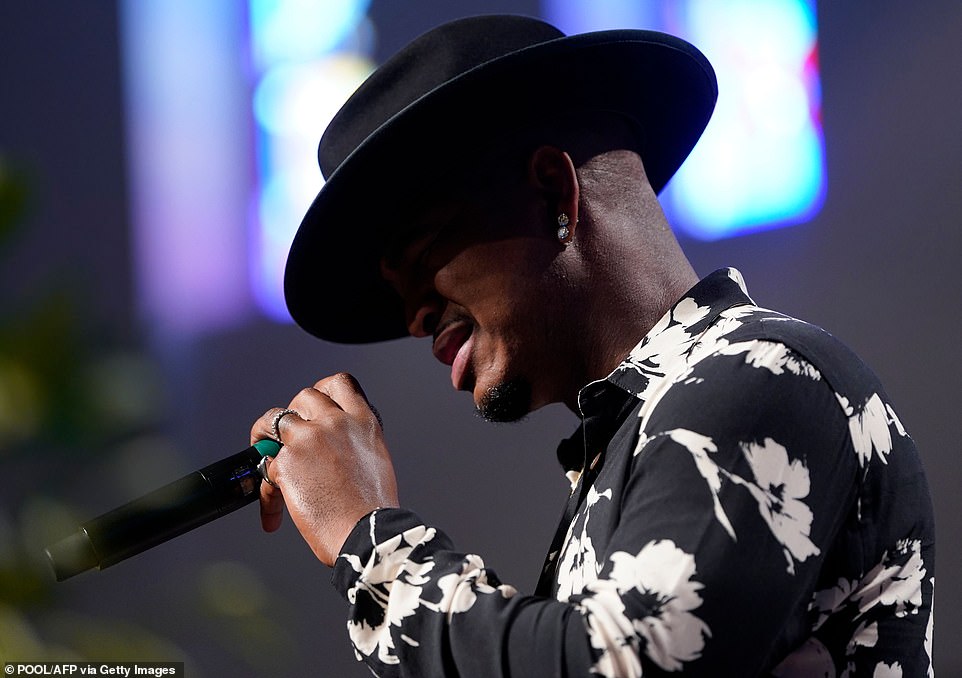 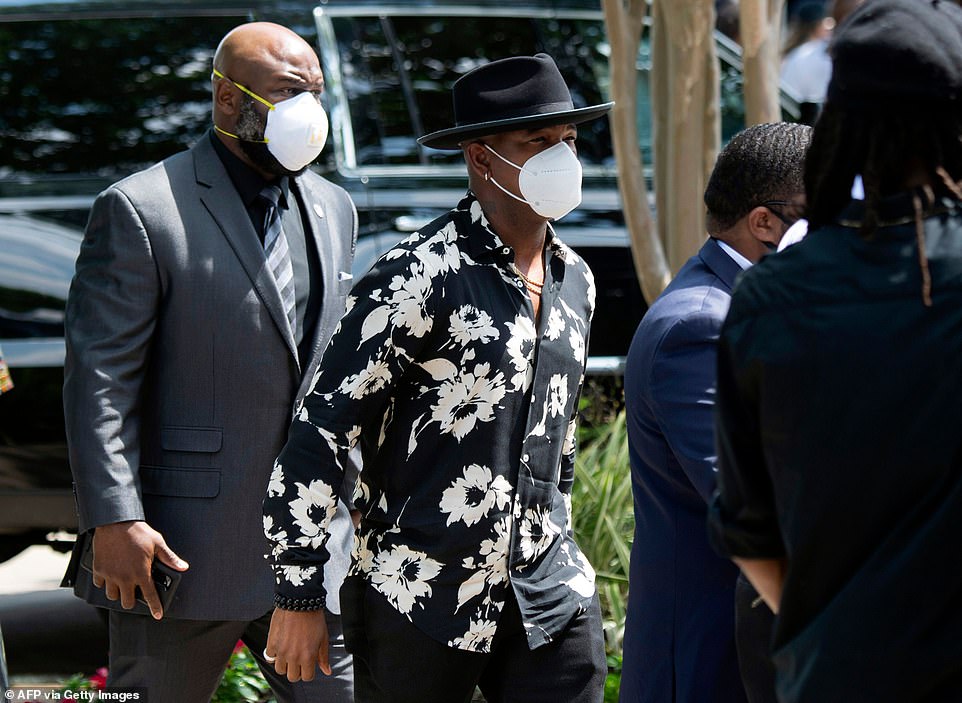 Singer Ne-Yo (C) arrives for George Floyd’s funeral on June 9, 2020, at The Fountain of Praise church in Houston, Texas 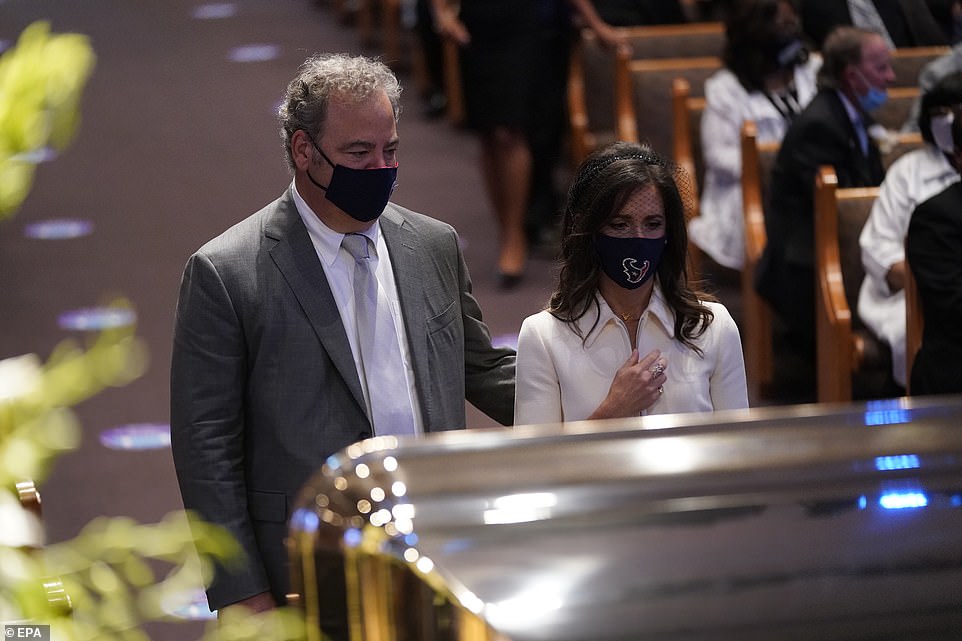 Cal McNair, chairman and chief executive officer of the Houston Texans, pauses by the casket during a funeral service 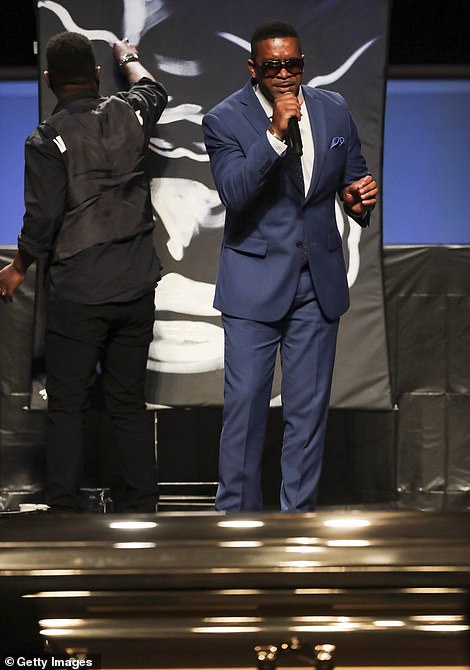 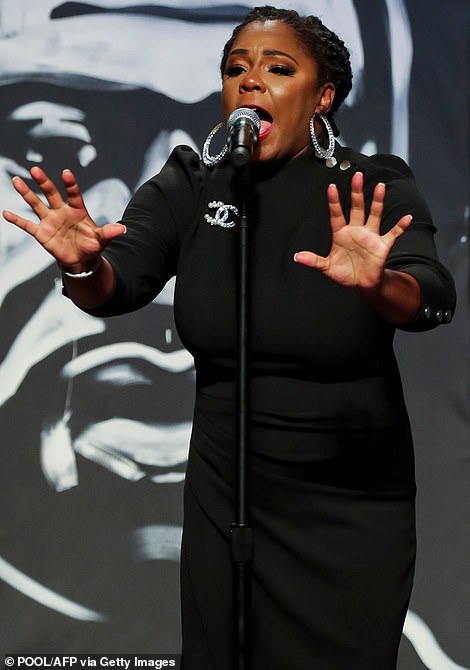 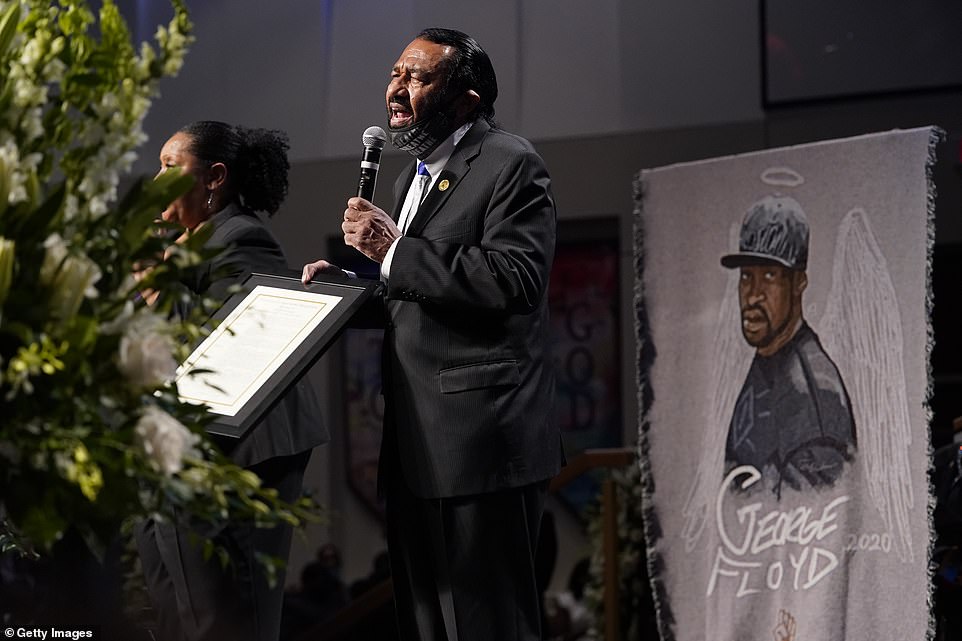 Rep. Al Green (D-TX) speaks at the funeral service for George Floyd in the chapel at the Fountain of Praise church on June 9

Presumptive democratic presidential candidate Joe Biden shared a moving video message at the service where he declared, ‘Now is the time for racial justice’.

‘To George’s family and friends: Jill and I know the deep hole in your hearts when you bury a piece of your soul deep in this Earth. As I said to you privately, we know you will never feel again.

‘To George’s children and grandchild: I know you miss your dad and granddad. To Gianna, as I said to you when I saw you yesterday you’re so brave, daddy’s looking down and he’s so proud of you…I know you have a lot of questions, honey. No child should have to ask the question that too many black children have had to ask – why? Why is daddy gone?

‘Why in this nation do too many black Americans wake up knowing they could lose their life in the course of just living their life.

Now is the time for racial justice. That’s the answer we must give to our children when they ask why. Because when there’s justice for George Floyd we will truly be on the way to racial justice in America. Then as you said Gianna, your daddy will have changed the world.’ 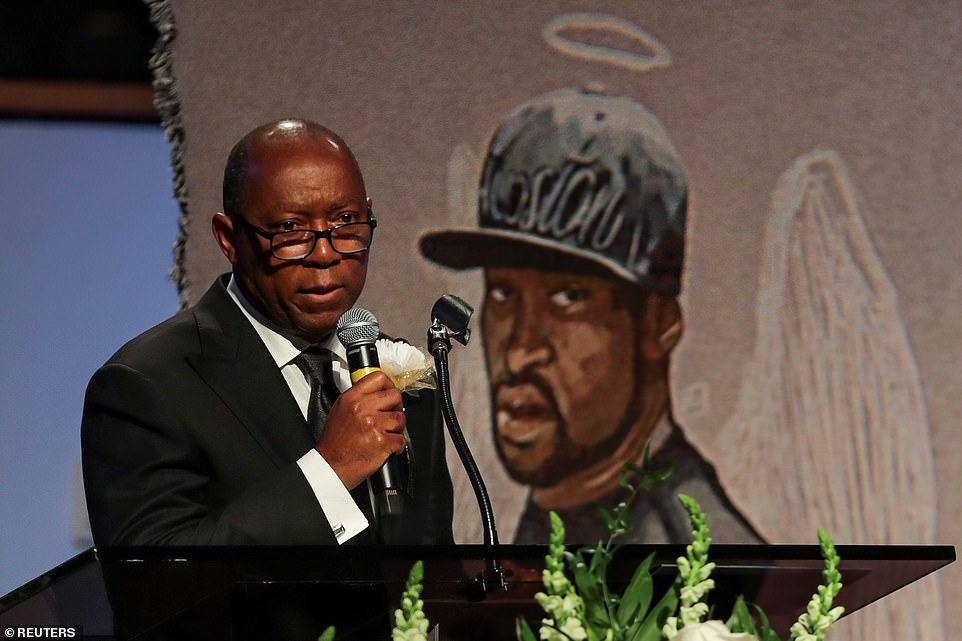 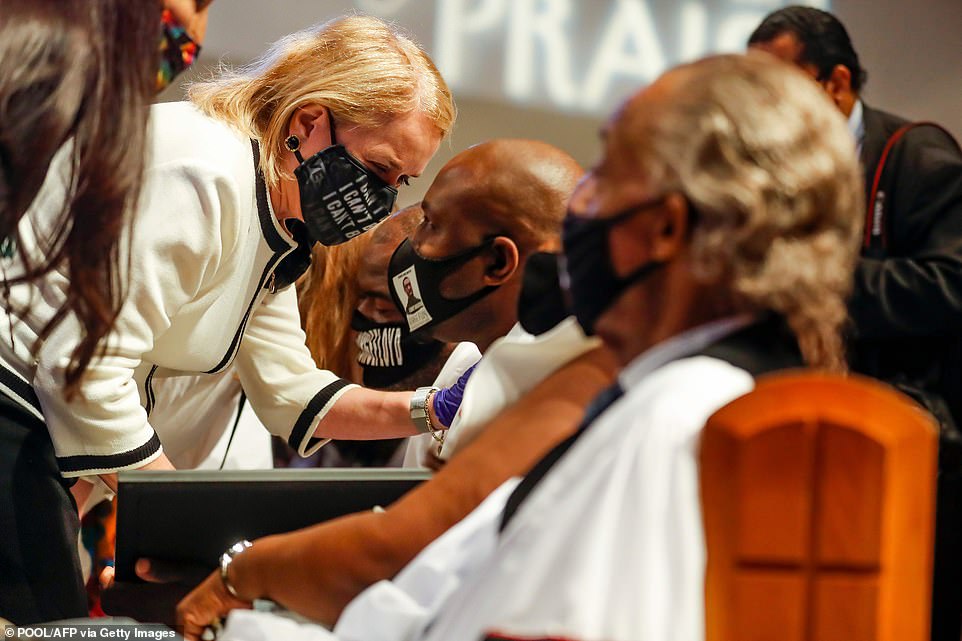 Rep. Sylvia Garcia(D-TX) speaks to Philonise Floyd during the funeral service. She wore an ‘I can’t breathe’ face mask 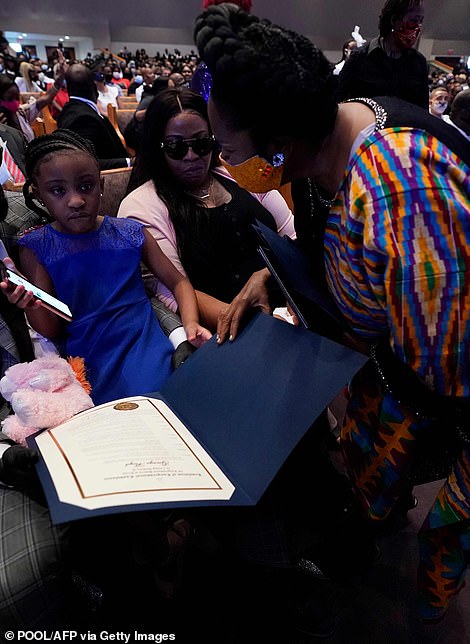 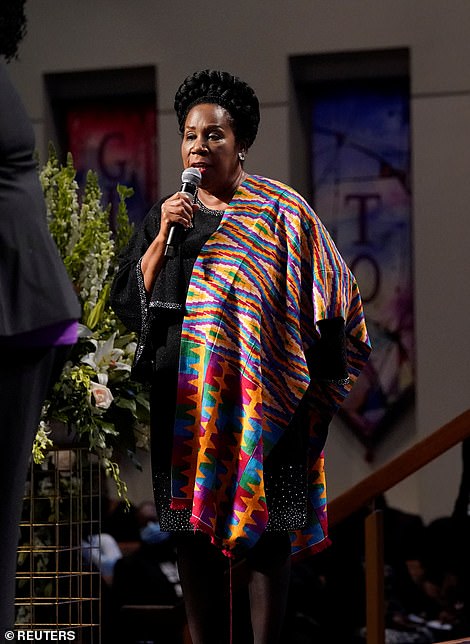 US Rep. Sheila Jackson Lee, D-Texas, speaks with Roxie Washington and Gianna Floyd, the daughter of George Floyd. She also spoke on stage 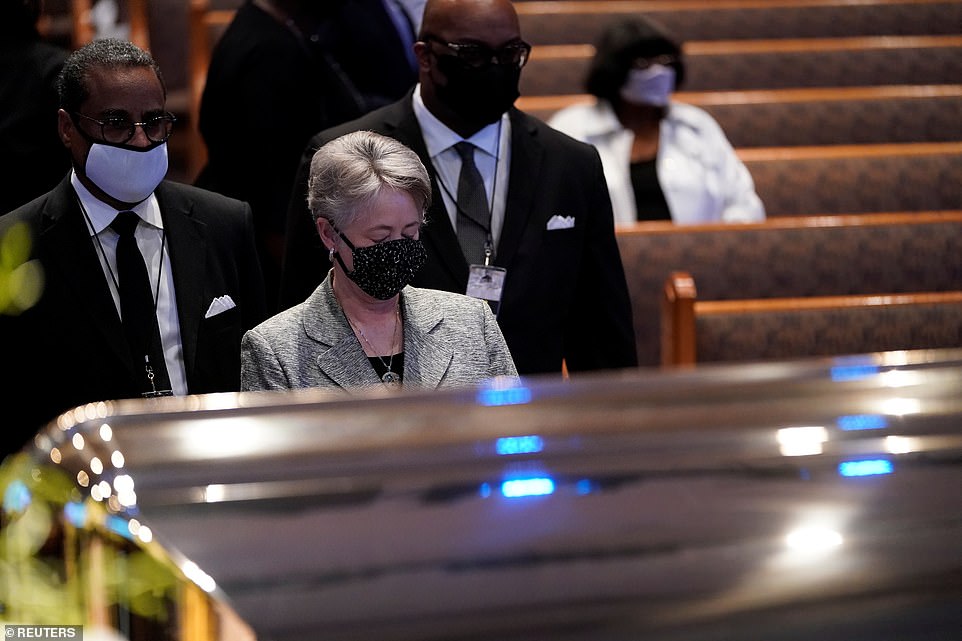 The service caps off six days of mourning for the black man whose death inspired a global reckoning over police brutality and racial injustice. Over the past six days, memorials for Mr Floyd were held in Minneapolis, where he lived in recent years, and Raeford, North Carolina, near where he was born.

Among guests were the families of other black Americans killed with no justice, including Michael Brown and Trayvon Martin.

Mr Floyd, 46, was to be laid to rest next to his mother in the suburb of Pearland. He cried out for his mother as a white Minneapolis police officer pressed a knee on his neck on May 25.

About 6,000 people attended a public memorial on Monday in Houston, where Mr Floyd grew up.

Under a blazing Texas sun, mourners wearing T-shirts with his picture or I Can’t Breathe – the words he uttered as he lay pinned to the pavement for what prosecutors say was eight minutes, 46 seconds – waited for hours to pay their respects. Mr Floyd’s body lay in an open gold-colored casket.

Mr Floyd’s death sparked international protests and scattered violence and drew new attention to the treatment of African Americans in the US by police and the criminal justice system.

Sydney mother makes potato skins into hot chips by coating them in oil and...

Two years after promise that 50 more interpreters could come to Britain, TWO have...

Wimbledon ‘WILL take place in 2021 even if fans cannot attend...