A 157-day cycle of radio bursts coming from the same spot in deep space could help astronomers pin down what causes the mysterious signals, a new study reveals.

Fast Radio Bursts (FRB) are very short but very intense pulses of radio waves. They were first discovered in 2007, but their origins remain unknown to astronomers.

This has led to some speculation they could be signs of an alien civilisation trying to contact Earth.

Now researchers from the University of Manchester have studied long-term monitoring data from the Lovell Telescope at Jodrell Bank to try to understand these unusual signals.

They claim the most likely explanation is that they are coming from a black hole or a very hot young neutron star in a binary system.

Over the past four years, astronomers have used the 240ft Lovell Telescope to study one of these unusual bursts – known as FRB 121102 – to look for patterns.

They found that it had an unusual cycle compared to some of the 100 or so other bursts discovered so far – it flares for 90 days and vanishes for the next 67, before repeating the cycle.

They looked at 32 bursts from the same source over the four year study period, along with previous research into FRB 121102 from other observations.

‘We predict that the source is currently “off” and that it should turn “on”‘ before August 28, the authors wrote in a paper.

The team say proving these bursts have a regular pattern helped the team rule out some origins for these mysterious astronomical phenomenon.

‘The discovery that at least some Fast Radio Bursts (FRBs) repeat has ruled out cataclysmic events as the progenitors of these particular bursts,’ the authors wrote.

Most of these bursts flare just once and are then never seen again – making them impossible to predict, according to astronomers.

Some show repeat activity, but until recently that was found to be completely random – at least it was until the 16-day cycle of FRB 180916.J10158+56 was found.

The presence of a regular sequence in the burst activity could imply that the powerful bursts are linked to large-scale cosmic phenomenon.

This could include the orbital motion of a massive star, a neutron star in a binary system or a black hole.

Other potential explanations for the cyclic activity include periodic flare-ups caused by a wobble in the rotational axis of a highly magnetised neutron star.

Rajwade of The University of Manchester, who led the new research, said it was an exciting result as it’s only the second time a pattern has been identified in a burst – and this is the longest cycle.

‘Detecting a periodicity provides an important constraint on the origin of the bursts and the activity cycles could argue against a precessing neutron star,’ he said.

When Fast Radio Bursts were first discovered in 2007 they were initially thought to be a one-off event linked to the explosion of a massive star.

This burst, that has the 157 day cycle, was first discovered in 2012 and was the first to show any kind of pattern when it was seen repeating for the first time in 2016. 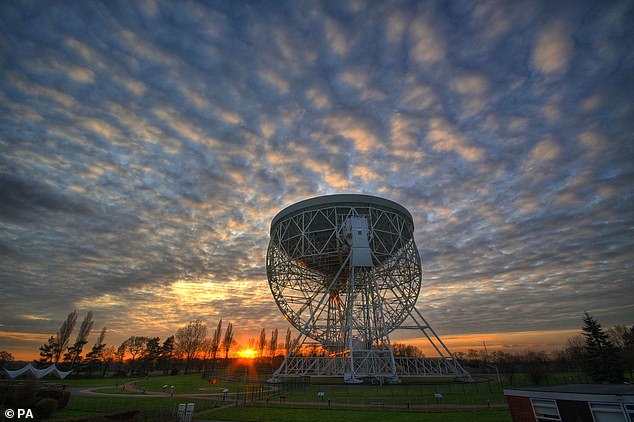 Benjamin Stappers, FRB hunter, said the result relied on regular monitoring and non-detections of the signal – in the 67 day gaps – was just as important as the signals.

To their surprise, the timescale for this cycle is almost 10 times longer than the 16-day periodicity exhibited by the first repeating source, FRB 180916.J10158+56, which was recently discovered by the CHIME telescope in Canada.

‘This exciting discovery highlights how little we know about the origin of FRBs,’ says Duncan Lorimer from West Virginia University.

‘Further observations of a larger number of FRBs will be needed in order to obtain a clearer picture about these periodic sources and elucidate their origin,’ he added.

Ryan Shannon, from Swinburne University, who was not involved in the study, told Newsweek that these findings could prove to be a ‘game changer’.

“The big question is how FRB 121102 relates to other FRBs, including many that have not been seen to repeat,’ said Shannon.

He said few FRBs have been shown to repeat so far and so this discovery could end up being a rare red herring in the quest to understand the phenomenon.

The team behind this study say it is possible that all FRBs repeat but with varying strength – and we’re just not able to detect the repetition.

The findings have been published in the journal Monthly Notices of the Royal Astronomical Society.

Fast radio bursts, or FRBs, are radio emissions that appear temporarily and randomly, making them not only hard to find, but also hard to study.

The mystery stems from the fact it is not known what could produce such a short and sharp burst.

This has led some to speculate they could be anything from stars colliding to artificially created messages.

Scientists searching for fast radio bursts (FRBs) that some believe may be signals sent from aliens may be happening every second. The blue points in this artist’s impression of the filamentary structure of galaxies are signals from FRBs

The first FRB was spotted, or rather ‘heard’ by radio telescopes, back in 2001 but wasn’t discovered until 2007 when scientists were analysing archival data.

But it was so temporary and seemingly random that it took years for astronomers to agree it wasn’t a glitch in one of the telescope’s instruments.

Researchers from the Harvard-Smithsonian Center for Astrophysics point out that FRBs can be used to study the structure and evolution of the universe whether or not their origin is fully understood.

A large population of faraway FRBs could act as probes of material across gigantic distances.

This intervening material blurs the signal from the cosmic microwave background (CMB), the left over radiation from the Big Bang.

A careful study of this intervening material should give an improved understanding of basic cosmic constituents, such as the relative amounts of ordinary matter, dark matter and dark energy, which affect how rapidly the universe is expanding.

FRBs can also be used to trace what broke down the ‘fog’ of hydrogen atoms that pervaded the early universe into free electrons and protons, when temperatures cooled down after the Big Bang.

Virgin Australia cuts 3,000 jobs – a third of its workforce

How to stay afloat in a tsunami of job cuts: Millions face redundancy

Penny Lancaster: ‘I’ve hit the menopause in lockdown – but at least Rod’s doing the dishes!’

How to cut your hubby’s barnet without sparking a barney

Kendall Jenner keeps a low profile while out after Kim Kardashian’s statement about Kanye’s...

Get down on lockdown! | Daily Mail Online

Virgin Australia cuts 3,000 jobs – a third of its workforce

How to stay afloat in a tsunami of job cuts: Millions...

Salman Rushdie warns that Left-wing ‘cancel culture’ is a threat to...

Katie Price looks radiant as she spends quality time with her...