By Chantalle Edmunds For Mailonline

This is the hilarious moment an animal loving Texan girl set out to save a squirrel from a kid’s paddling pool, with unexpected results.

The squirrel is taking a swim around a blue inflatable pool in the backyard of a home in Lumberton, Texas, on June 7, when it is caught on camera.

The daughter of the woman filming appears in shot and quietly moves around the side of the children’s paddling pool.

She gently talks to the squirrel.

‘Don’t touch him!’ her mother says.

The girl has set her mind on a rescue and says, ‘I have to help him. Give me something to get him out with.’

‘Get a board,’ the mother replies.

The girl grabs a yellow chair and puts it into the pool before clambering in to direct the chair towards the animal.

Holding the chair by its legs she follows the squirrel around the pool, at first to no avail.

The girl from Lumberton, Texas, has set her mind on a rescue and says, ‘I have to help him. Give me something to get him out with’

Instead of climbing up the chair, the squirrel skillfully jumps over it at every turn.

‘Let me save you,’ she shouts a final time, before scooping the squirrel up on the top of the chair.

‘Thank you,’ she says as she moves the chair towards the side of the pool before preparing to drop the squirrel onto the grass.

The squirrel, however, has other ideas and quickly runs up the chair and jumps onto the girl’s red shirt. 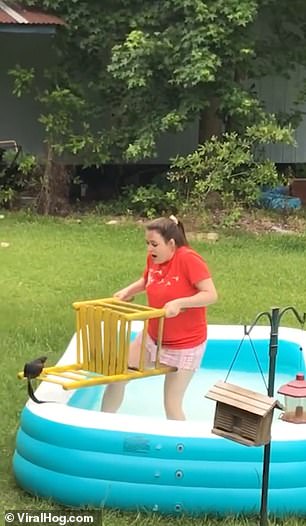 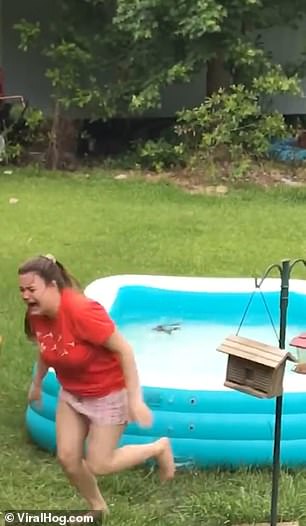 She scoops the squirrel out of the water but it then goes on to run up the chair and onto the girl’s shirt. She shrieks and leaps out of the pool

The girl shrieks and screams. The squirrel briefly clings on before jumping back into the pool, at which point the shocked girl leaps out.

According to the girl’s mother, she came away with a scratch on her arm.

After a second more cautious attempt, the girl manages to rescue the squirrel.

Donald Trump hate-watches CNN in the residence, is not in the Oval Office until noon

Vanessa Hudgens flashes her toned midriff in a boho chic outfit as she takes...

More than HALF of UK adults are now being paid by...

Bella Thorne looks fresh-faced as she lounges around her backyard in...