Houston’s police chief has decried ‘knee jerk reactions’ to defunding police departments across the country in the wake of George Floyd‘s death, saying that policing is not broken but acknowledged it does need to do better.

Chief Art Acevedo, who runs one of the largest departments in the US with 5,300 officers, told NBC’s Today on Tuesday that he did not support calls to defund police departments.

Instead, he said Congress needed to pass laws that ensured all 18,000 police departments across the United States are run the same way.

Floyd’s death at the hands of Minneapolis police on May 25 has resulted in widespread protests and raised demands for police reforms and racial justice across the country.

It has prompted Democrats in Congress to propose an overhaul of police procedures and accountability and local lawmakers in Minneapolis to consider disbanding the city’s police department.

Acevedo, who was among those to attend Floyd’s public memorial in Houston on Monday, said that poorer communities and those with people of color would suffer the most if police departments were defunded.

‘The people that are impacted most by violence in this country… need the police the most. They’ll be the ones that will pay the price,’ he said.

‘The problem with our country is that our policing model is very much decentralized. We have 18,000 policing departments and it’s time for Congress to look at the critical policies… and make sure they pass laws that make sure all 18,000 police departments do business the same way.

He said the fact that the Minneapolis police department was still allowing officers to manipulate a person’s neck, or chokehold, during arrests had impacted the entire nation.

‘We’ve got to have standards nationwide. (Policing) is not broken but it does need to do better,’ he said.

Acevedo said ‘knee jerk reactions’ by elected officials to defund or disband police departments was not what communities wanted.

‘Let’s make sure we support the good police and hold accountable the bad policing, it’s not one or the other,’ he said. 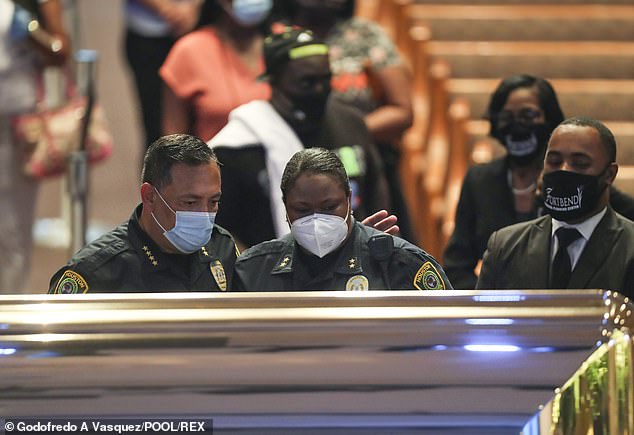 Acevedo, who was among those to attend Floyd’s public memorial in Houston on Monday, said that poorer communities and those with people of color would suffer the most if police departments were defunded 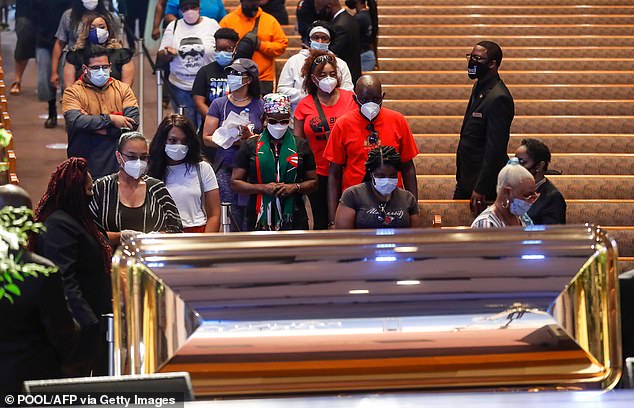 ‘The nation has united against police misconduct.

‘I really believe we’re in a watershed moment and very hopeful that we’re going to see some systemic change in our country.’

His comments came ahead of Floyd’s burial in his hometown of Houston on Tuesday. 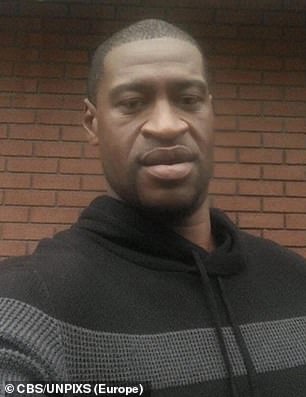 George Floyd (pictured), was killed when Minneapolis cop Derek Chauvin knelt on his neck during an arrest on May 25

Acevedo was among those who met with Floyd’s family when the slain man’s body arrived in the city at the weekend.

The police chief was also present at Floyd’s public memorial as thousands of mourners attended a viewing at the Fountain of Praise Church.

It comes as Democrats in Congress are proposing an overhaul of police procedures and accountability after the mass protests over the deaths of black Americans at the hand of law enforcement.

The Justice in Policing Act is among the most ambitious law enforcement reforms from Congress in years and confronts several aspects of policing that have come under strong criticism, especially as more and more police violence is captured on cellphone video and shared across the nation and the world.

The package limits legal protections for police, creates a national database of excessive-force encounters and bans police choke holds, among other changes.

The changes, if enacted, would have massive implications on policing in the US. 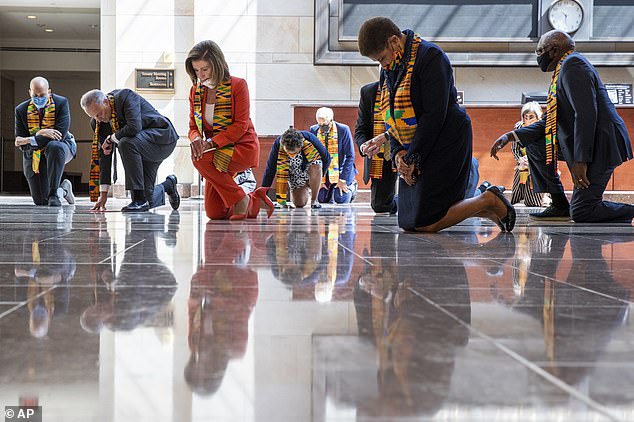 House Speaker Nancy Pelosi and other members of Congress kneel and observe a moment of silence at the Capitol’s Emancipation Hall on Monday. Democrats in Congress are proposing an overhaul of police procedures and accountability after the mass protests over the deaths of black Americans at the hands of law enforcement 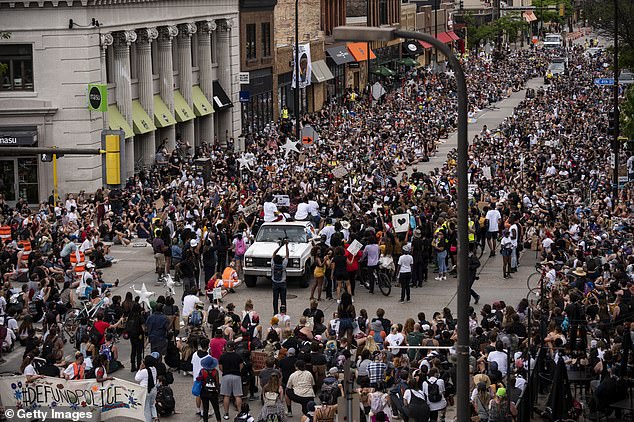 It’s not clear whether the legislation will pass, especially in an election year and amid calls to ‘defund the police’ and growing protests.

Some departments are already taking action. On Monday, the Los Angeles Police Commission said the city’s police department had agreed to an immediate moratorium on training and using chokeholds.

The legislation does not call for police departments to be de-funded or abolished, as some activists have demanded. But lawmakers called for spending priorities to change.

‘There won’t be defunding, there won’t be dismantling of our police,’ Trump told a roundtable of state, federal, and local law enforcement officials at the White House.

He has tried to set himself up as a ‘law and order’ leader and has criticized the package, claiming Democrats have ‘gone CRAZY.’

Former Vice President Joe Biden opposes the movement to defund police departments but supports the ‘urgent need’ for reform, a spokesman for his presidential campaign said.

Bryshere Gray is sued by Chicago landlords for allegedly causing $26,120 in damages to condominium

The murders most foul: Almost 50 years later, is the bunny girl killer still on the loose?

Details emerge about woman’s last moments when she was forced into...

Birmingham police tell shoppers not to give money to beggars